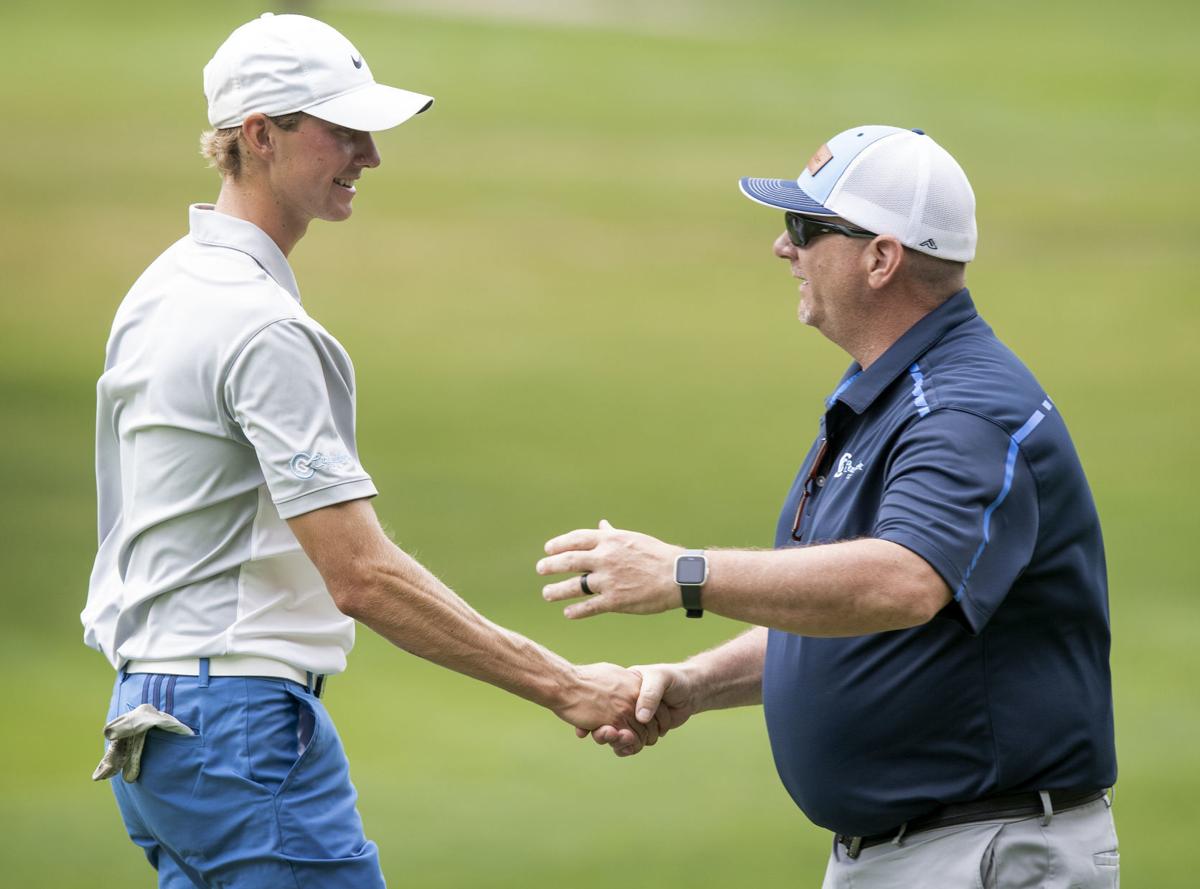 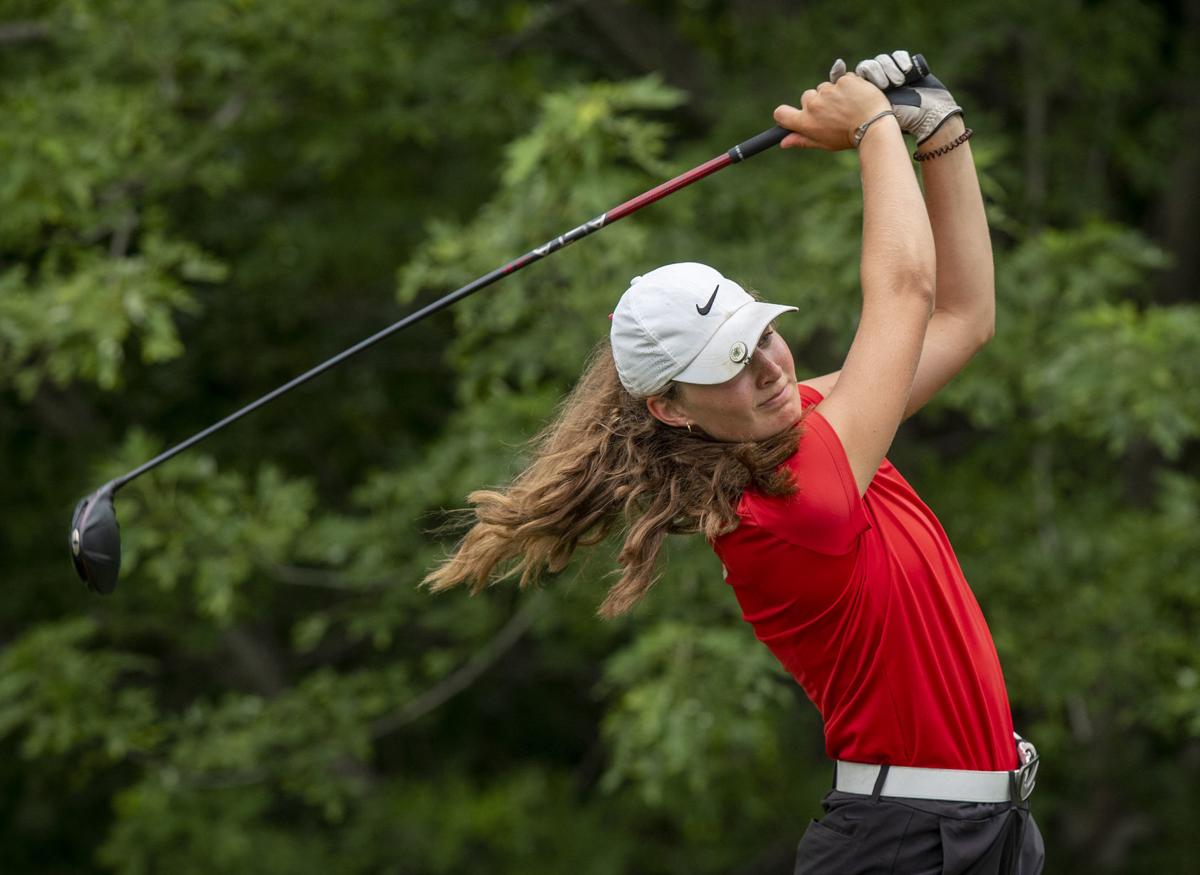 Bishop Neumann's Lindsey Thiele tees off on the 14th hole on Tuesday at Oakland Golf Club. 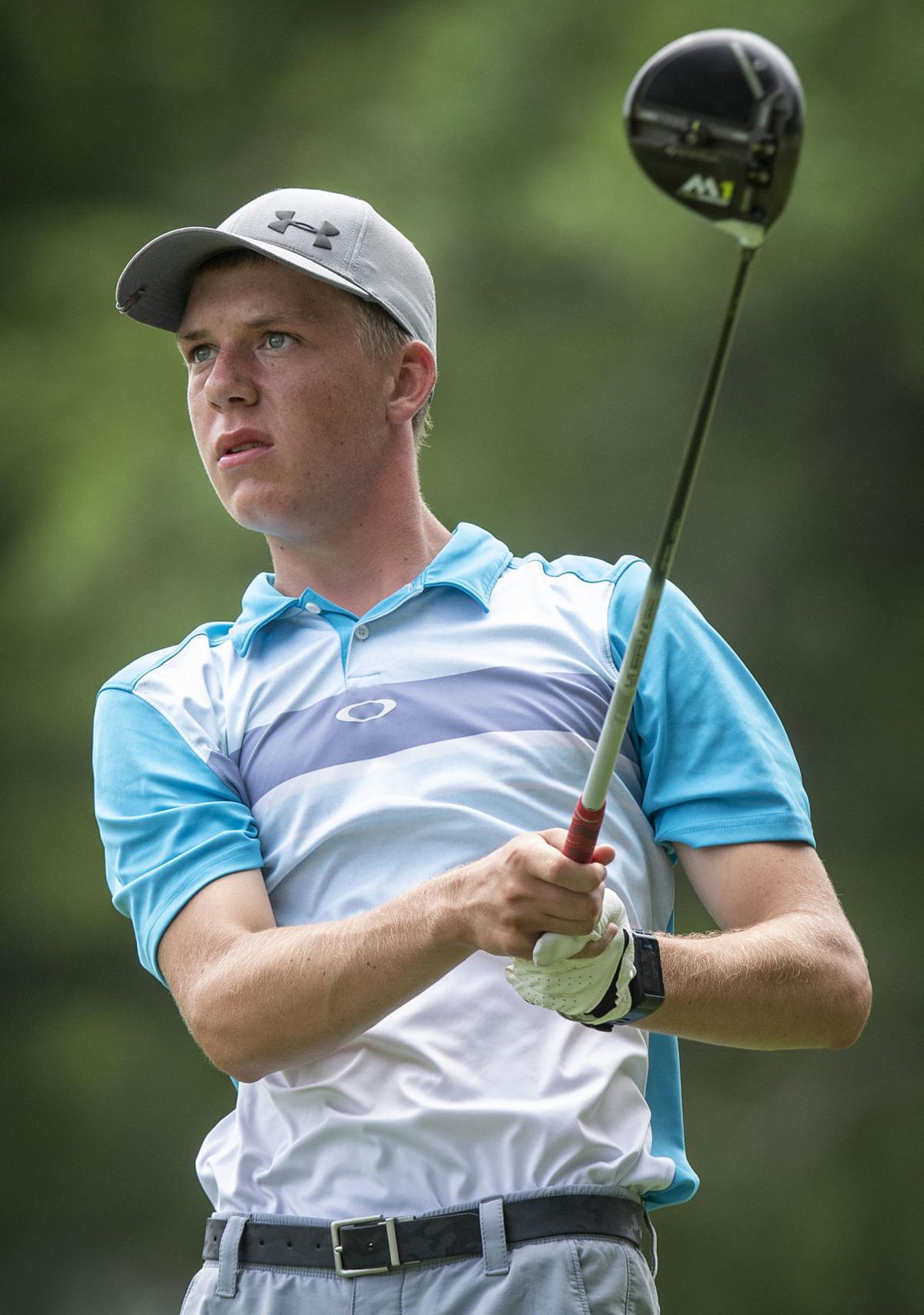 OAKLAND — The course was dotted with school colors and team polos.

There was an individual champion.

Moments after tapping in for a first-place clinching par on the 18th green, Eli Fox of Grand Island Central Catholic hugged his coach, Craig Rupp.

There was a team champion, too. There were medals and pictures.

No, it was not a sanctioned high school event. But for two days at the Oakland Golf Club, about 60 Class C golfers helped renew the spirit of high school golf at the first-ever Class C Invitational.

When COVID-19 led to the cancellation of spring sports, including boys golf, a group of people in Oakland wanted to give some of the best golfers in Class C a chance to compete in the summer. Dallas Sweet, then the Oakland-Craig High School activities director, and some Oakland Golf Club members were sitting at the clubhouse in April, tossing around an idea:

What if they invited the top 15 teams and the top 20 individuals from the 2019 state tournament to Oakland and had them play in a high school-type tournament? To give seniors like Fox an opportunity to capture a state title that barely eluded him in 2019. To give young golfers a chance to play in their first high school-aged event.

“That was our deal, if we were able to give people a way to compete,” said Sweet, who will soon begin duties as Malcolm’s AD.

Teams, coaches and players were all for it. Of the 10 2019 state medalists (top 15) eligible to play, nine competed this week in Oakland.

Fox shot rounds of 74 and 74 (148) to win the tournament by three strokes. His win comes more than a year after he finished runner-up — by one stroke — at the Class C state tournament in Grand Island.

“I just graduated and I didn’t have a season, so it’s kind of nice because I would have had a good look at state, and this is a nice compensation for what I missed,” said Fox, who trailed by a stroke entering the final round. “It feels good.”

Fox wasn’t the only golfer looking to make the most of this week’s opportunity.

The Bishop Neumann boys felt like they had a strong chance to win a team title in the spring before the season was abruptly stopped. Working as a team, they shot a 657 to win the championship by four strokes over Oakland-Craig on Tuesday.

“We were back down to Class C (from Class B) and the whole team was really looking forward to the season,” said Lindsey Thiele, the Cavaliers’ top golfer. “Obviously, all of that getting canceled was super, super tough, especially with it being a senior season, that was really hard. I was just so happy they were able to put something on.

“So many great teams, so many great golfers out here, and it replicated the state tournament so well.”

For Thiele, it marked her final “high school” event before heading to Nebraska to play golf. Because Bishop Neumann doesn’t offer girls golf in the fall, Thiele can play in the spring. Her younger sister Lauren also plays for the Cavaliers.

For GICC’s Colby Setlik, it was his first and only opportunity to play in a varsity-level tournament after spending six years with the program, the first two as a student-manager. With many strong golfers ahead of him at GICC, Setlik waited patiently for his turn to grab one of the varsity spots.

For Jacob Woodmancy, it was a chance to play no matter the distance. The Perkins County golfer made the 5½-hour trip to Oakland. Golfers also came from Loomis and Hartington Cedar Catholic.

Because it was a two-day tournament, some teams, such as GICC and Johnson County Central, stayed in hotels.

“I think the turnout was good, probably a little bit better than what we had hoped for,” Sweet said. “I think seeing kids from as far away was surprising. That’s a sacrifice, coming and staying in a hotel and it’s not on a school’s dime, it’s on your dime now.”

The tournament had a couple of differences compared to a sanctioned high school tournament, most notably, golfers were allowed to have caddies.

Thiele’s caddy was younger sister Brooke, who is about to enter the sixth grade. A day earlier, Brooke caddied for Lauren.

Did the younger sister offer some good caddy tips?

“She did,” said Thiele, who tied for sixth place. “She helped me read a couple greens, helped me with the clubs.”

Fox admits this week doesn’t completely make up for a lost high school season. It didn’t have the same feel as state, “but it was as close as it could get,” he said.

No complaints, Fox added. For two days and 36 holes, it was about playing golf, playing as a team, and representing school colors and pride.

“It was so neat seeing the kids come up the fairway laughing and joking and smiling," Rupp said. “That’s something that I wanted to see in April and May, but we got to see it in June.

The NSAA will return to its normal summer protocol heading into a fall high school sports season. At least for now.

A pair of golfers from the Omaha area spoiled the Thiele family party at the Nebraska Women's Match Play Championship.

Bishop Neumann's Lindsey Thiele tees off on the 14th hole on Tuesday at Oakland Golf Club.