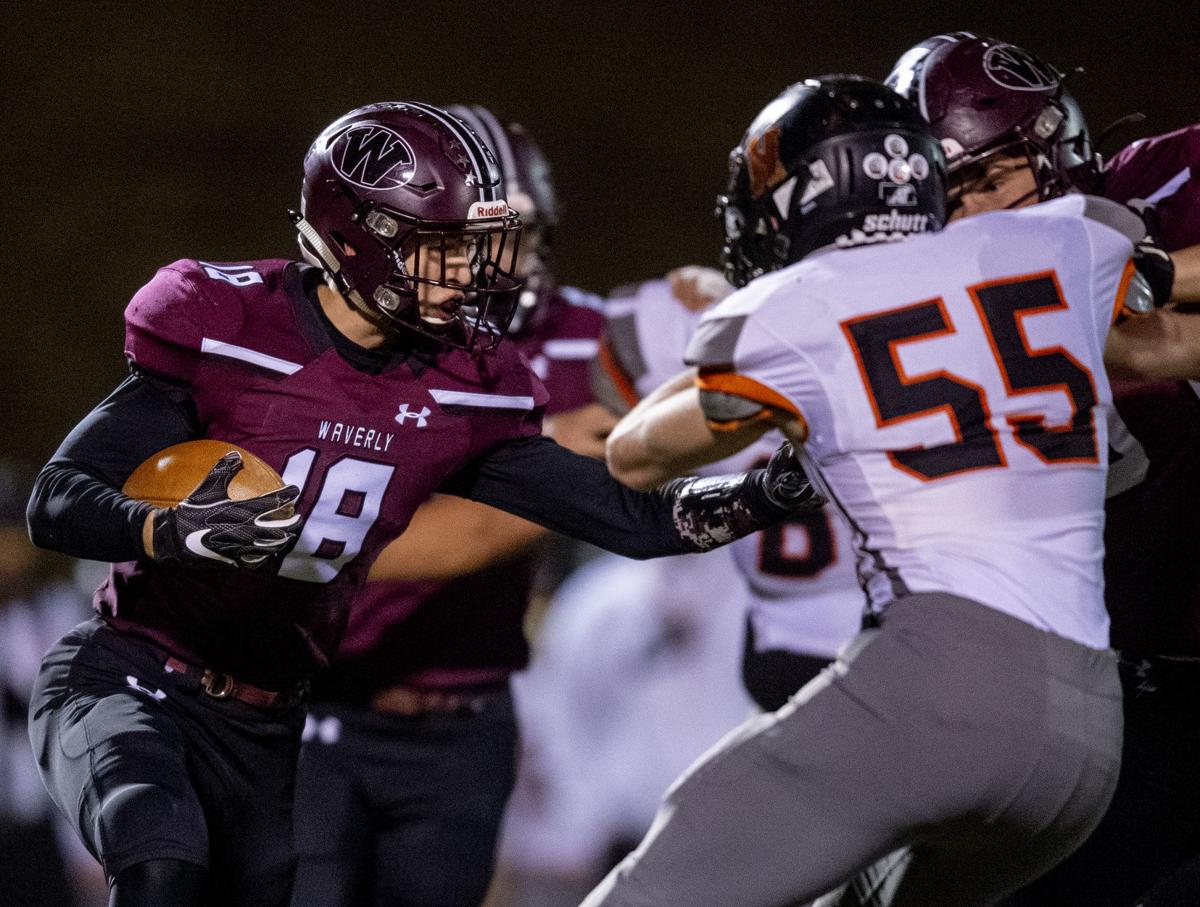 Waverly quarterback Mason Nieman gets a block from teammate Hunter Hanke (right) against Hastings's Laif Hultine (55) en route to first-quarter touchdown on Friday in a Class B quarterfinal at Waverly High School. 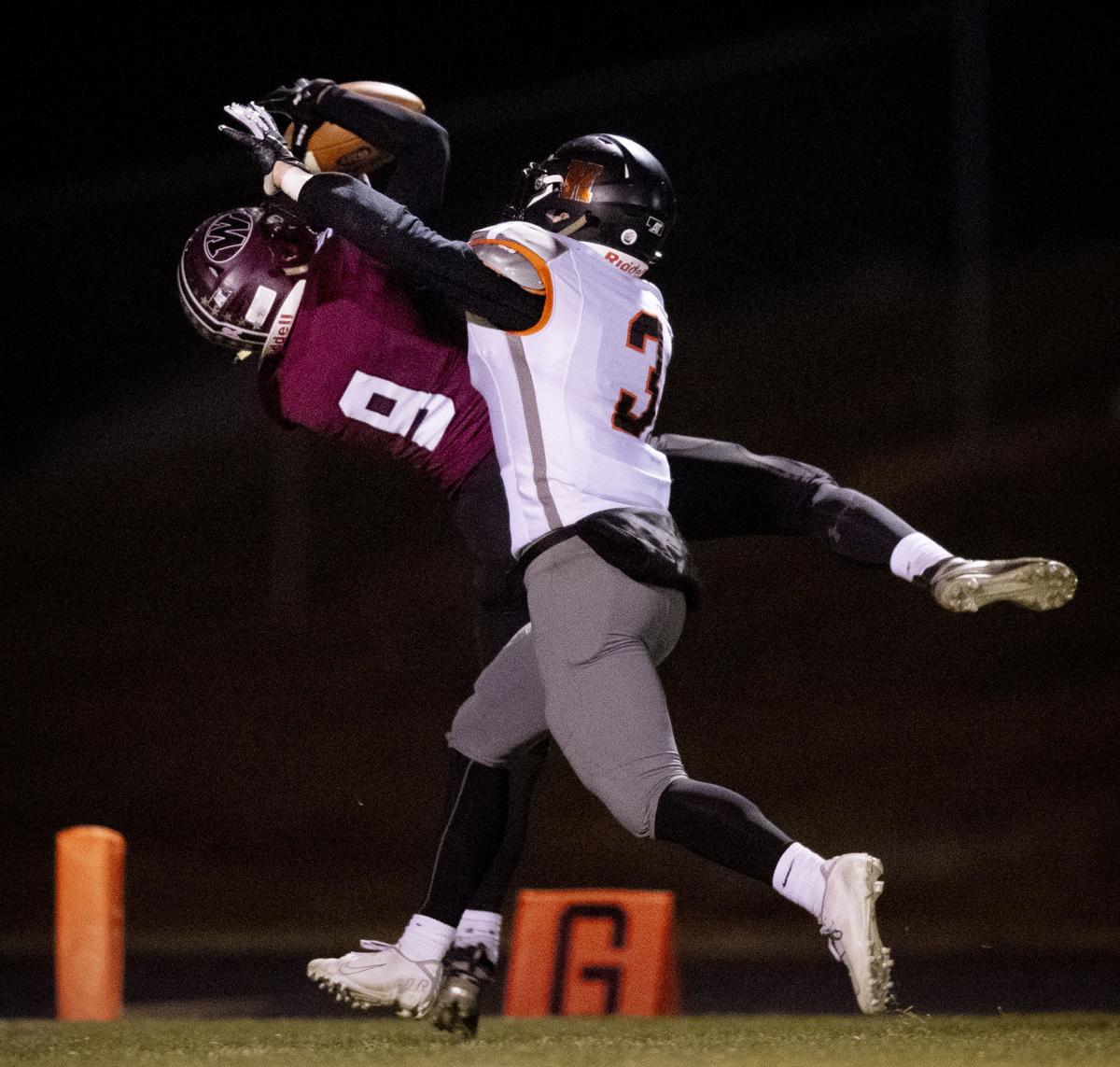 Waverly's Haven Piening (9) catches a 48-yard touchdown pass despite the tight defense of Hastings' Gareth Jones in the second quarter Friday during a Class B quarterfinal in Waverly.

WAVERLY — A full-time blitz and a complete running game helped Class B No. 2-ranked Waverly to a 48-14 victory over Hastings in the quarterfinals of the state playoffs Friday at Viking Stadium.

Waverly earned a rematch with Omaha Skutt, which squeaked out a double-overtime victory over Waverly a few weeks ago.

"Not revenge, but a chance is what we see we have," said Waverly quarterback Mason Nieman, who ran for touchdowns of 76 and 55 yards and threw for two more. "We really wanted another chance. But we knew we had to take care of the games in front of us first. We did that."

Hastings (8-3) closed to 14-7 in the second quarter when standout quarterback Jarrett Synek hit Carson Shoemaker on a 56-yard touchdown pass.

But the Vikings answered with a 55-yard touchdown keeper by Nieman, who finished with 189 yards rushing on 11 carries. Ethan Kastens then carried five times for 51 yards, including a 6-yard touchdown run, to give Waverly a 28-14 halftime lead.

Hastings countered with a 69-yard touchdown pass from Synek to Zaide Weidner to cut the lead to 28-14 on the second play of the second half.

Waverly, a crushing, rambling running team, struggled to get much done after gaining 289 yards on the ground in the first half.

No problem. Waverly recovered a Hastings fumble and scored six plays later, and then watched as Barrett Skrobecki picked off a pass and returned it 77 yards for a touchdown.

"That defense is very good, and they blitzed every play, and it was devastating," said Hastings coach Charlie Shoemaker. "We got hit early with their quick, long-play touchdowns, and we battled back. Then, that score in the third quarter was a real a boost. And we were stopping them when they had the ball, but they still scored."

Nieman, who plays safety as well as quarterback, explained:

"I'm just glad we don't have to play against our defense because that would be frightening. The line blasts and the linebackers fill and everybody is in there on almost every play on defense," he said. "The defense really gives you nowhere to go."

Waverly coach Reed Manstedt, whose team is 10-1, said the big plays were key to winning.

"They have a really good quarterback (Synek) and some very good receivers and if they get going, they are going to score," he said. "But we scored quickly in the first half and then our defense scored in the second half. Hastings has speed, but so do we.

"We have gotten a little bit better every game. Now, one more step to get to the final."

The rematch turned out to be a mismatch.

Sabastian Harsh rushed 44 times for 293 yards and five touchdowns as No. 8 Scottsbluff rolled over No. 3 Norris 49-28 in the Class B state foo…

WAYNE — Up a touchdown with 12 minutes to go, and the game still up for grabs, Wayne felt right at home.

Jackson Seward had two rushing touchdowns and Eli Larson rushed for 169 yards as the Class C-2 No. 2 Wildcats shut down No. 7 Aquinas 25-10 in…

Bellevue West grinds it out to knock out 2018 champ Burke

Bellevue West is known as a quick-strike offense, but it was a grind-’em-out kind of drive that got the Thunderbirds going Friday night.

Another week, another exciting night of state playoff football.

Ron Powell takes a look at the D-1 and D-2 quarterfinals in his Two-Minute Drill.

No. 2 Sacred Heart held No. 3 Bloomfield and senior quarterback Braden Eisenhauer in check in a 36-0 victory in the Class D-2 state quarterfinals in Bloomfield.

Cross County and Tri County were both fresh off quality wins, but it was Cross County that won the matchup 36-12 in a Class D-1 football quart…

STROMSBURG — Carter Seim says he doesn’t like cold weather, but you might have trouble convincing Tri County of that.

A look ahead at semifinal matchups in classes C-1, C-2 and Six-man football.

Waverly's young offensive line anxious for rematch against No. 1 Skutt

Starting three sophomores on the offensive line going against an undefeated, defending state championship football team known for its physical…

Waverly quarterback Mason Nieman gets a block from teammate Hunter Hanke (right) against Hastings's Laif Hultine (55) en route to first-quarter touchdown on Friday in a Class B quarterfinal at Waverly High School.

Waverly's Haven Piening (9) catches a 48-yard touchdown pass despite the tight defense of Hastings' Gareth Jones in the second quarter Friday during a Class B quarterfinal in Waverly.