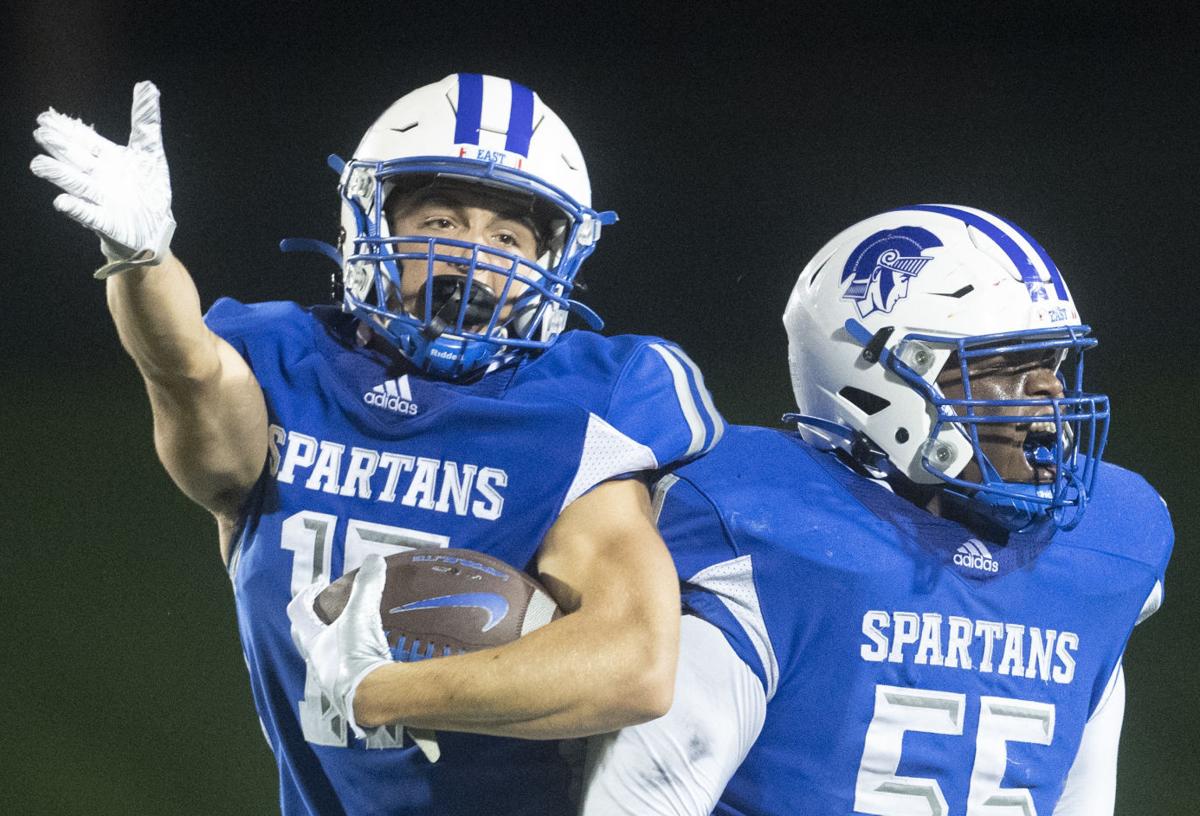 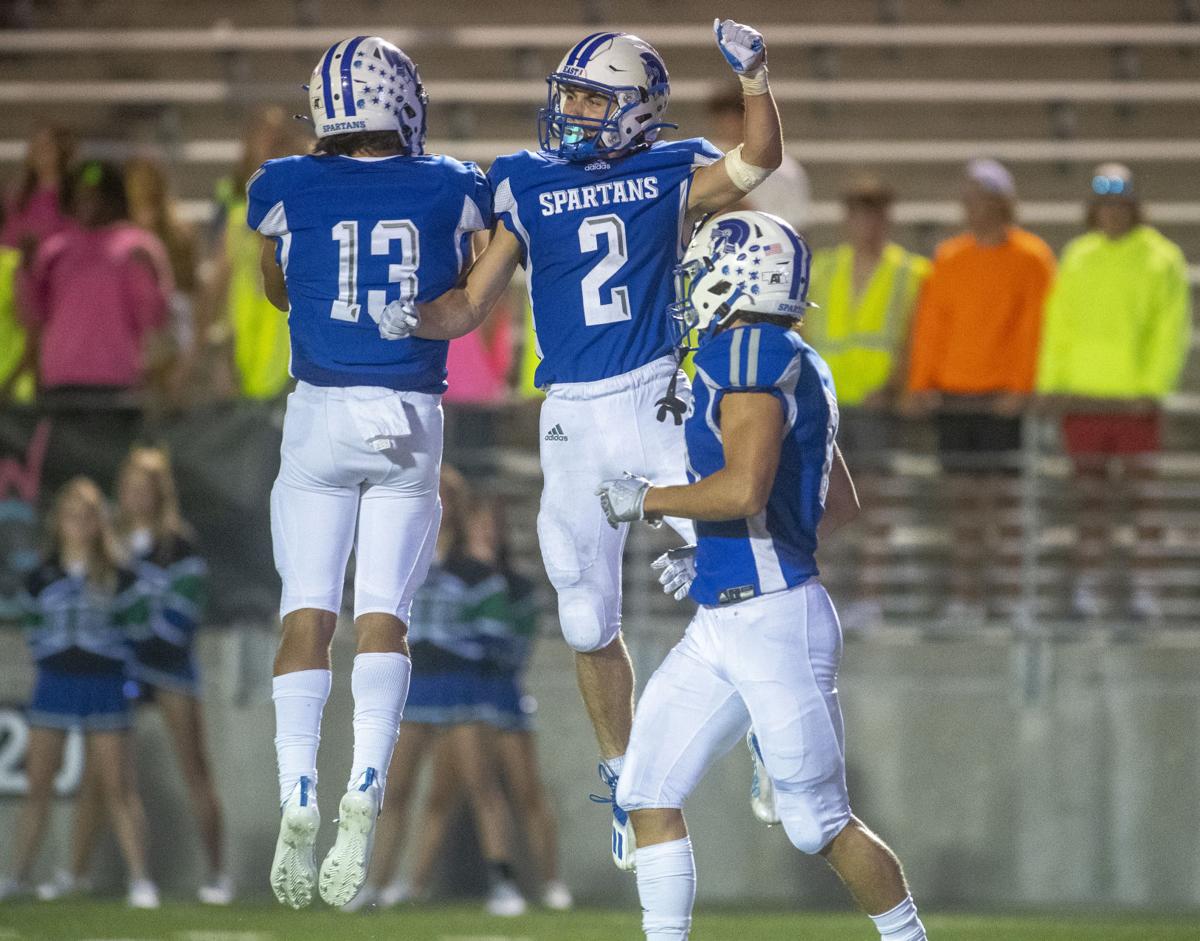 Lincoln East's Billie Stephenson (2) celebrates his touchdown against Millard North with Noah Walters (13) during the first half Friday at Seacrest Field.

As he walked off the field, Lincoln East quarterback Noah Walters made sure the game ball made it safely to the Spartans' locker room.

After the performance he put up, it’s a souvenir worth keeping.

By the time halftime rolled around, Walters had already tossed four touchdown passes and totaled nearly 300 yards in the air, and he added to those marks in the second half.

Flores to the rescue: Gretna shrugs off mistakes to overwhelm Lincoln Pius X

Lincoln East (3-1) roared out to a fast start in last week’s win over Norfolk, and the Spartans replicated that feat once again. It took less than two minutes for Walters to throw his first score, a 19-yard screen to Billie Stephenson, and he remained a big-play threat all game long.

Walters also tossed a 90-yard touchdown to Cooper Erikson and a 72-yard strike to Luke Greisen as part of his big first-half effort.

“I knew that our linemen could (keep) their blocks,” said Walters about the long touchdown strikes. “Our line did great, our wide receivers got open and did their jobs, so all I needed to do was throw them the ball.”

Millard North (0-4) relied on its rushing attack as always, with the triple-option offense posing a challenge to the Spartan defense. Nose guards Sam Cappos and GeGe Crayton did well to slow the Mustangs down, even if quarterback Ben Weindel ran for a pair of first-half touchdowns.

“They’ve been doing that for a long time, and I was really pleased with the way our kids responded,” Lincoln East coach John Gingery said. “They did a great job defensively slowing them down.”

After Millard North scored a touchdown to make it an eight-point game early in the third quarter, Lincoln East dominated the remainder of the contest. The Spartans scored 28 unanswered points and hardly allowed any Millard North drives into their territory during the second half.

Walters connected with Erikson for another long passing touchdown, a 55-yard strike, in the third quarter, and he finished his scoring with a 22-yard throw to AJ Seizys.

Walters is no stranger to big performances on Friday nights, but a plus for Lincoln East was that six other players scored touchdowns alongside their star quarterback.

“We have weapons that put stress on defenses,” said Gingery. “We’ve been playing some great teams, so we have to keep performing.”

Six-touchdown performances don’t come easily, and it’s part of an upward trend for Walters after throwing four touchdowns in a loss to Papillion-La Vista South two weeks ago and totaling five touchdowns against Norfolk last week.

Not that he needed to prove it, but the East senior is one of the best quarterbacks in the state. Through four games, he has 17 touchdowns to just one interception, an impressive ratio the Spartans hope continues next week.

It’ll be a short week of preparation ahead of a clash against No. 4 Lincoln Southeast, which suffered its first loss of the season to Creighton Prep on Thursday. That game may determine the best football team in the city, a title that the Spartans are confident they can achieve.

“A lot of our boys have a lot of heart, and I know top to bottom we’re good,” Walters said.

“Southeast is a great football team and we’re going to have to come back and hit it hard,” added Gingery. “We don’t have a lot of time to celebrate this one, and it’s going to be another tough game.”

Photos: Class A No. 10 Lincoln East comes on late to down Millard North

High school football Week 4 is in the books. Here's all of the Journal Star's content, in one spot

Despite five fumbles, Lincoln Lutheran shows 'a ton of unity' to knock off No. 8 Sutton

Josh Duitsman's pass to Max Bartels on a fourth-and-15 play gave the Warriors the go-ahead touchdown with 4:49 left in the game.

The Discoverers (3-1) had the Rockets on their heels from the start, scoring on their first four possessions.

The Class C-1 second-ranked Bluejays made big plays on both offense and defense to help coach Ryan Thompson get his 100th victory.

Friday Night Rewind: Waverly rallies, then survives Northwest; Parkview back rushes for 400-plus

Need to catch up on Week 4 action? Here's a good place to start. We check in on the city, state, No. 1 teams and more in this "rewind."

"The last 10 years, I'd say this is probably in the top two," Milford's football coach says of its Friday win.

Prep football game of the week: Title of best team in Lincoln at stake when No. 8 Southeast, No. 9 East meet on Thursday

This top-10 battle will feature a red-hot quarterback in Lincoln East's Noah Walters, and a solid Southeast defense that wants to stop him.

Luke Mullin: It's time to consider if Noah Walters is having the best season by a Lincoln QB

On Thursday and Friday nights, Seacrest Field might as well be the set for the Noah Walters show. Is now when we remind you he's still uncommitted?

Lincoln East's Billie Stephenson (2) celebrates his touchdown against Millard North with Noah Walters (13) during the first half Friday at Seacrest Field.