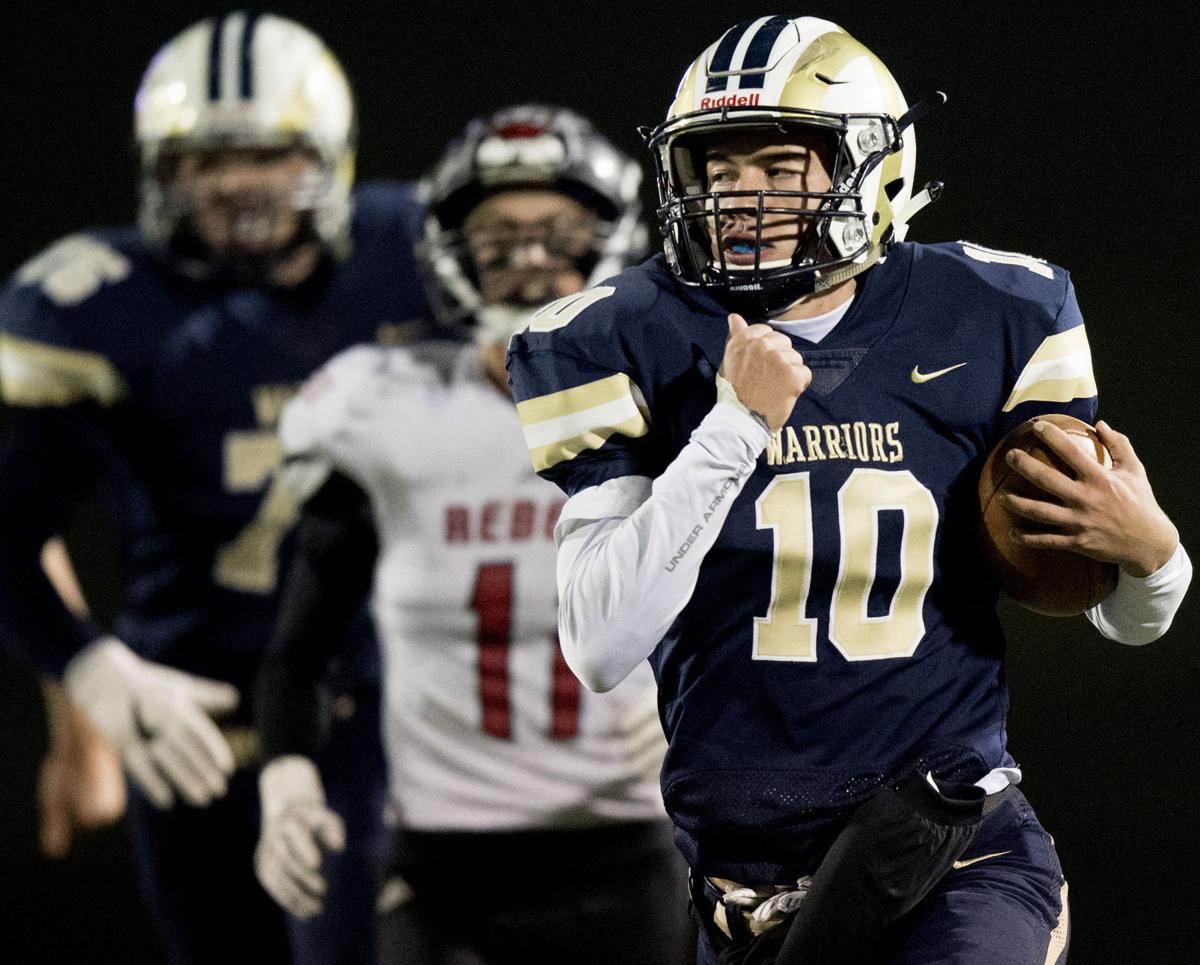 Lincoln Lutheran's Cole Schaedel (10) hasn't missed a beat while filling in at quarterback for teammate Zach Clausen. Schaedel has thrown for 1,771 yards, completed 60 percent of his passes and thrown 23 touchdowns. 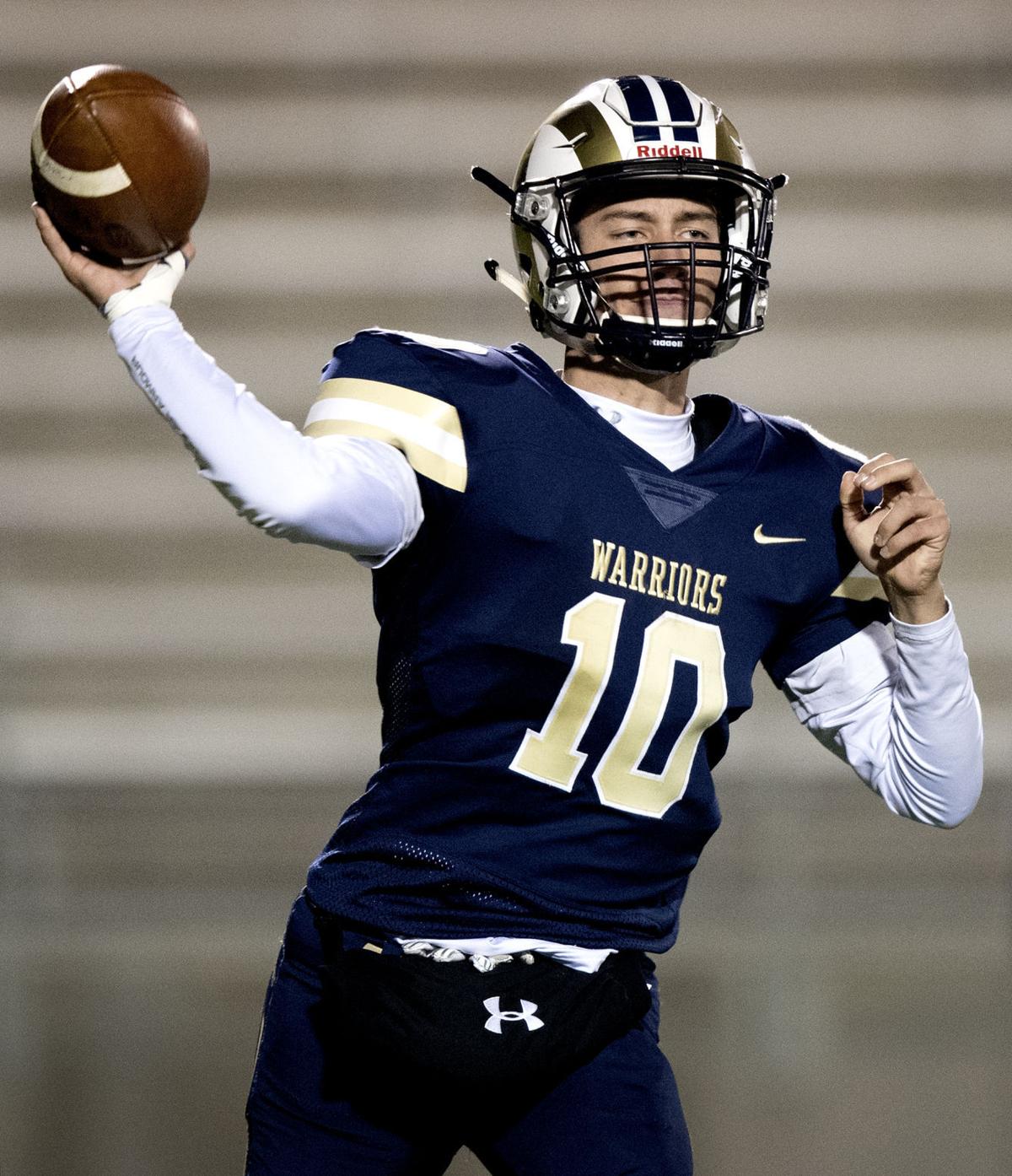 Lincoln Lutheran's Cole Schaedel has thrown for 1,771 yards, completed 60 percent of his passes and thrown 23 touchdowns this season.

The quarterbacks in the Class C-2 semifinal football playoff game between top-ranked Centennial and Lincoln Lutheran are right where they want to be — one win from playing in Memorial Stadium and two from capturing a state championship.

The journey Bronco junior all-stater Wyatt Ehlers and the Lincoln Lutheran duo of senior Cole Schaedel and junior Zach Clausen took to get to Friday's 7 p.m. game in Utica, however, might not be the path they expected to follow back in August.

The Broncos (11-0) have gradually undergone a transformation from exclusively a spread, passing attack to more of a ground game as the season has progressed. In 11 games, Ehlers, a 6-foot, 170-pound junior, has passed for 1,784 yards and 22 touchdowns, but that’s behind his 10-game totals of a year ago, when he threw for 1,876 yards and 20 scores.

Ehlers started the season like he would blow right past his 2016 numbers, throwing for a combined 524 yards and eight TDs in wins over Central City and C-2 state playoff semifinalist Yutan in the first two games this fall.

“When our offensive line dominates and we can run the ball like that, we don’t have to throw,” Ehlers said. “Gavin has improved so much during the season, he’s playing really, really well. He’s taken a lot of pressure off of our passing game. Either way is fine with me.”

Centennial coach Evan Klanecky says that kind of maturity has helped the Broncos go 20-1 over the past two seasons.

“Wyatt is such a smart player,” Klanecky said. “He’d be the first to tell you that the numbers (statistics) don’t matter. His football IQ is extremely high and he’s going to get us into plays that give us the best chance at success.”

As a free safety, Ehlers is part of a Bronco defense that thrives on creating turnovers. Centennial has 26 interceptions this season, led by junior cornerback Jackson Hirschfeld’s eight and three from Ehlers. The Broncos also have 16 fumble recoveries, including five from Avery.

Hirschfeld, a junior, is the team’s leading receiver with 46 catches for 702 yards and nine TDs.

The defense has continued to play at a high level despite the loss of senior middle linebacker Jake Prochaska in the final regular season game. Prochaska played the first nine games on a torn ACL, then he tore his other ACL in the win over Sutton, ending his season.

“We’re doing this for him,” Ehlers said of Prochaska. “Having two ACL injuries is a tough way to go out your senior year.”

Schaedel never expected to be Lincoln Lutheran’s quarterback when the season started. The senior was at wide receiver with 6-6 junior Zach Clausen behind center after throwing for 1,533 yards in nine games a year ago.

First, Clausen suffered a neck injury in the opener against Humboldt-Table Rock-Steinauer. The potential Division I quarterback recruit returned for Week 3 against Lincoln Christian, but then broke his foot when his potentially game-winning field goal was blocked in the waning seconds of a 20-19 loss to the Crusaders.

Lutheran has not missed a beat with Schaedel at quarterback, as he’s thrown for 1,771 yards, completed 60 percent of his passes and thrown 23 touchdowns.

And now the Warriors (9-2) have Clausen back, working him in at running back in the 21-12 quarterfinal win over No. 4 and previously unbeaten Arcadia-Loup City Friday. In his first game ever at the position, he ran for 64 yards on 12 carries.

“We had to teach him how to take a handoff in practice Tuesday and Wednesday (last week),” Lutheran coach Greg Nelson said. “Zach looked good Friday, he was running smooth and running with power. Having two quarterbacks on the field at the same time gives us some options we wouldn’t have otherwise.”

"I finally got a chance to hit people after being on the sidelines for eight weeks,” he said. “Cole is doing a great job at quarterback. I’ll protect him in the pocket and do whatever I can to help the team.”

Schaedel says having Clausen back is a “big emotional boost” for the Warriors.

Scores and pairings for the state high school football playoffs.

Second-ranked Irish looking to hit on all cylinders at No. 5 Bloomfield

UTICA — Wyatt Ehlers may have a future in acting.

Lincoln Lutheran's Cole Schaedel (10) hasn't missed a beat while filling in at quarterback for teammate Zach Clausen. Schaedel has thrown for 1,771 yards, completed 60 percent of his passes and thrown 23 touchdowns.

Lincoln Lutheran's Cole Schaedel has thrown for 1,771 yards, completed 60 percent of his passes and thrown 23 touchdowns this season.