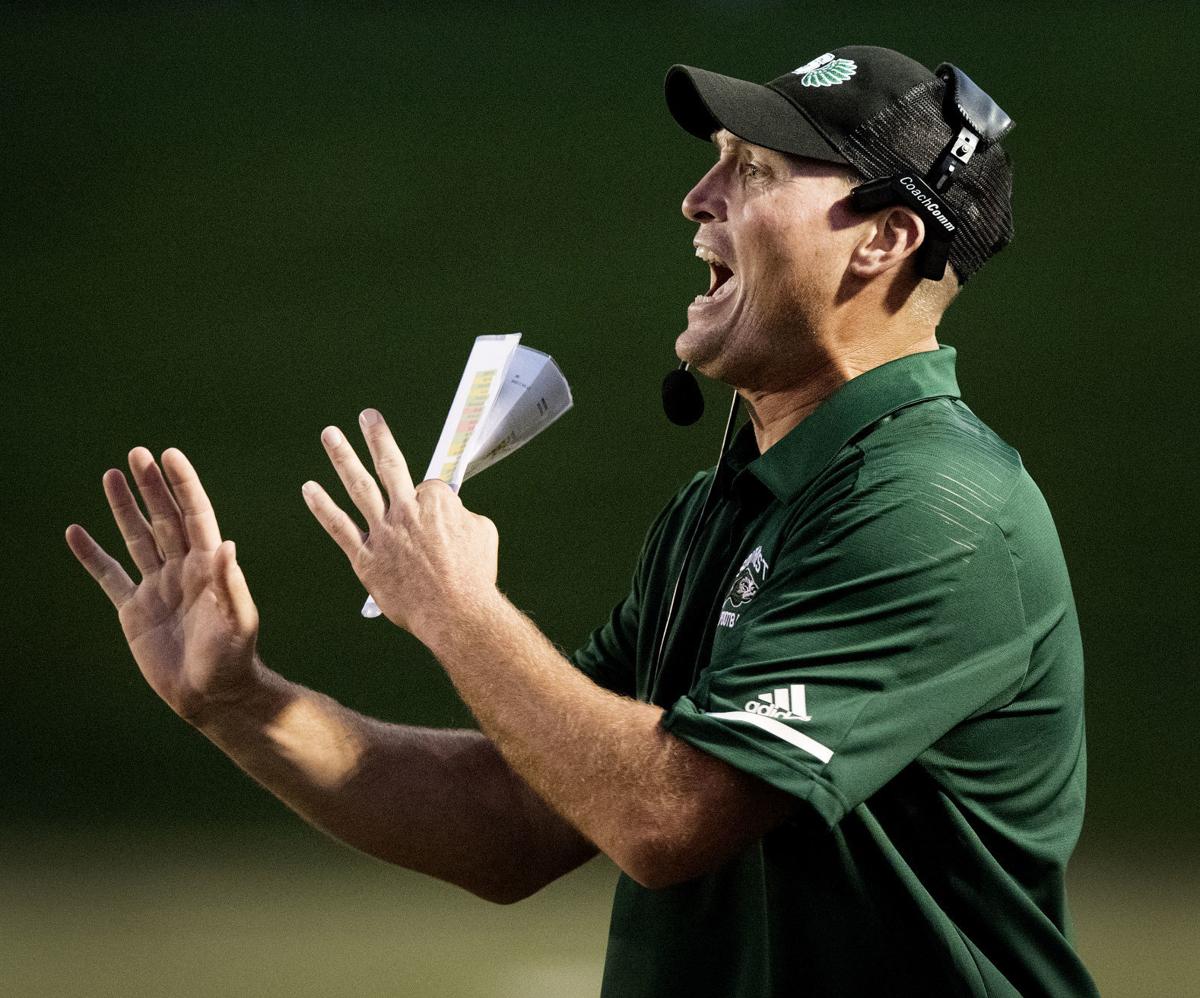 Lincoln Southwest head coach Andrew Sherman gestures to his players from the sideline in the second quarter against Elkhorn in 2018. 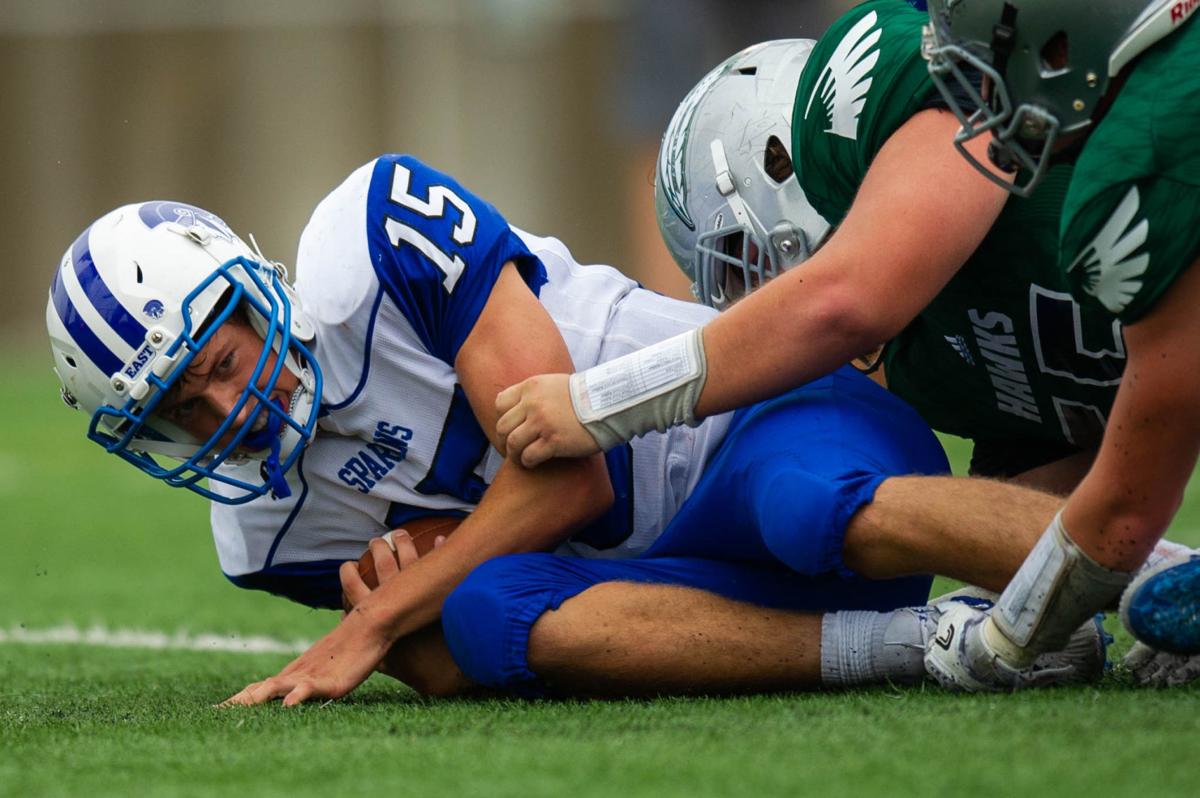 Andrew Sherman would love to see his home theater room occupied by his son and his fellow linemen on the Lincoln Southwest football team through the month of November.

The Silver Hawk coach gets kicked upstairs when senior Drake Sherman and company get together to watch football or play video games. The longer Southwest’s season lasts, the more Coach Sherman will be banished from his favorite part of the house.

“Quite a few guys come over on the weekends, eat my hot wings and drink all my Gatorade,” Coach Sherman said, laughing.

The longer the season lasts, the longer the elder Sherman gets to coach his son, a 6-foot-1, 290-pound three-year starter who plays offensive guard and nose guard on defense. Coach has his son in weight training class an hour-and-a-half a day, but that’s not the same as the father-son memories made on the football field.

“Drake and I don’t talk a ton of football at home, but the other night, I did have him snap the ball to me just in case we’d have to move him to center (the position Drake played as a sophomore).”

Drake, who plans to play college football somewhere next season and study engineering, says playing for his dad was rewarding, but challenging as well.

“People say coaches' kids get a break, but I never did,” he said. “My dad is always tougher on me than anyone else on the team because he didn’t want to show any favoritism.’’

This will be the Silver Hawks’ third game against the Islanders in the past two years. Southwest upset Grand Island 21-7 on its home field last season before the Islanders avenged that loss earlier this month with a 34-13 win at Seacrest Field in Week 8.

“I will be mentioning that game last year to our team this week as well as our 2010 team that went 5-4 in the regular season, then won two rounds in the playoffs,” Coach Sherman said.

Behind Sherman, all-city senior lineman Dane Gebers and the rest of the offensive front, Southwest’s offense has come to life the last two weeks both running and passing. Against the Islanders on Oct. 18, quarterback Laken Harnly got the passing game going by completing 21 of 27 passes for 270 yards with fellow senior Grant McKinsey snagging a school-record 11 catches for 164 yards, including a 71-yard touchdown.

Last Thursday, Southwest cranked up the running game as junior Telo Arsiaga went for 225 yards on 25 carries and four TDs in a 41-27 win over Lincoln High.

“We knew our offense could be this dynamic, we just had to stop shooting ourselves in the foot with penalties and turnovers,” said the 5-10, 170-pound Harnly, who has passed for 1,091 yards and rushed for another 486 while accounting for 11 TDs.

“I think if we play we’re capable of, we’ve got a shot Friday night (against Grand Island).”

Ron Powell: The chasm between the top and bottom of Class A football needs to be addressed

Class A football at the top has never been better.

Check out Ron Powell's prep football ratings as the regular season wraps up.

It was quite a weekend for Grand Island’s Caleb Francl.

Sacred Heart ready for the playoffs after strong performance vs. Johnson-Brock

Coming into their showdown Thursday with fourth-ranked Johnson-Brock, Class D-2 No. 2 Falls City Sacred Heart’s football team had not played a…

Week 9 was a wild one. In many cases, a win sealed a postseason berth or punctuated undefeated seasons. In others, losses ended seasons on the…

Columbus High School will join the HAC in the fall of 2020 after a unanimous vote, expanding the conference to a 12-team league.

Snow was falling and accumulating on the FieldTurf surface at Aldrich Field as Lincoln Pius X’s football practice concluded Monday.

Lincoln East was in the midst of a three-game winning streak heading into a Week 8 clash with No. 2 Millard West, but Spartan football coach J…

Previewing Friday's high school football playoff games in classes A and B.

Elmwood-Murdock rolled to a 74-16 win over an East Butler team that had ended a three-game skid in Week 9. Journal Star photos by Francis Gardler.

Elmwood-Murdock went 4-5 in 2018, ending the season in the first round with a loss in the playoffs.

Off we go. The past two months -- and beyond -- have led up to the state playoffs, which are in full-swing across the state line Friday night.

Lincoln Southwest head coach Andrew Sherman gestures to his players from the sideline in the second quarter against Elkhorn in 2018.