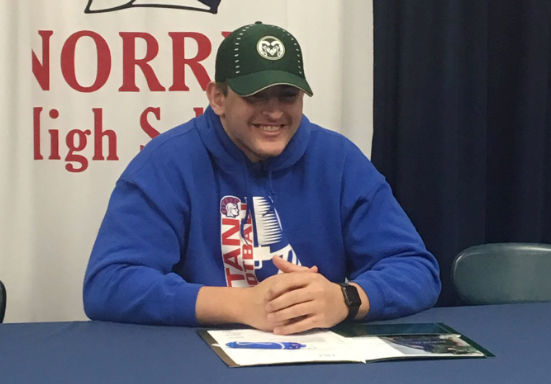 Nouredin Nouili signed to play at Colorado State on Wednesday.

FIRTH — To say the recruitment process has been a whirlwind for Norris senior and German foreign exchange student Nouredin Nouili would be quite an understatement.

Take, for example, when he found out what National Signing Day was.

“Just two weeks ago,” he said with a smile.

Or all the offers he racked up over that similar time period.

“I guess USD (University of South Dakota) offered me, but I just found out about that today,” Nouili said in front of a room full of his teammates, coaches and cameras on Wednesday morning in Room W-1 at Norris High School.

But when it comes down to it, it doesn’t take a vast knowledge of the recruiting process to know that Colorado State was the right fit for him. With offers from South Dakota State and North Dakota State, as well as many other schools from around the Midwest, Nouili signed his letter of intent with the Rams, citing the chance to play Division I football as the main factor.

“SDSU was the front-runner for a long time, well, I guess three weeks,” Nouili said. “They were the first to offer me. I enjoyed talking with them and their coaching staff but, in the end, I chose CSU because I felt it was the best fit for me. Of course, I wanted to play D-I, but if it would’ve been a lower level I would’ve tried my best as well.”

Nouili’s foray into football began three years ago as he got to know the game with two seasons in Germany. When he came to Nebraska this summer, Norris coach Jim Jacobsen saw the potential in him that ultimately culminated in his commitment to Colorado State seven months later.

“(Nouili) showed up right before football was about to start and we obviously saw his size and mass and thought, 'OK, we have something here,'” Jacobsen said. “We started running him through drills, so now not only is he big, he’s athletic. We knew his background wasn't big on football, but he caught on quick. We needed the season to get extended because I think you would’ve seen even greater play out of him.”

The Titans lost in the first round of the state playoffs, so by the time Nouili got into the flow of the season it was almost over. The season may have ended abruptly, but it was enough time for coaches from around the region to see the upside in Nouili.

So what kind of player are the Rams getting?

“I work very hard and what I start, I finish,” Nouili concluded. “I’m a hard-working German, a tough German and I’ll give them my all.”

Nouredin Nouili arrived in the United States from Germany on July 23 to spend a year as a typical high school exchange student. Now he's a Division I football recruit.

Northwest Missouri State has snatched up another Class B all-state quarterback from the area.

Nouredin Nouili signed to play at Colorado State on Wednesday.