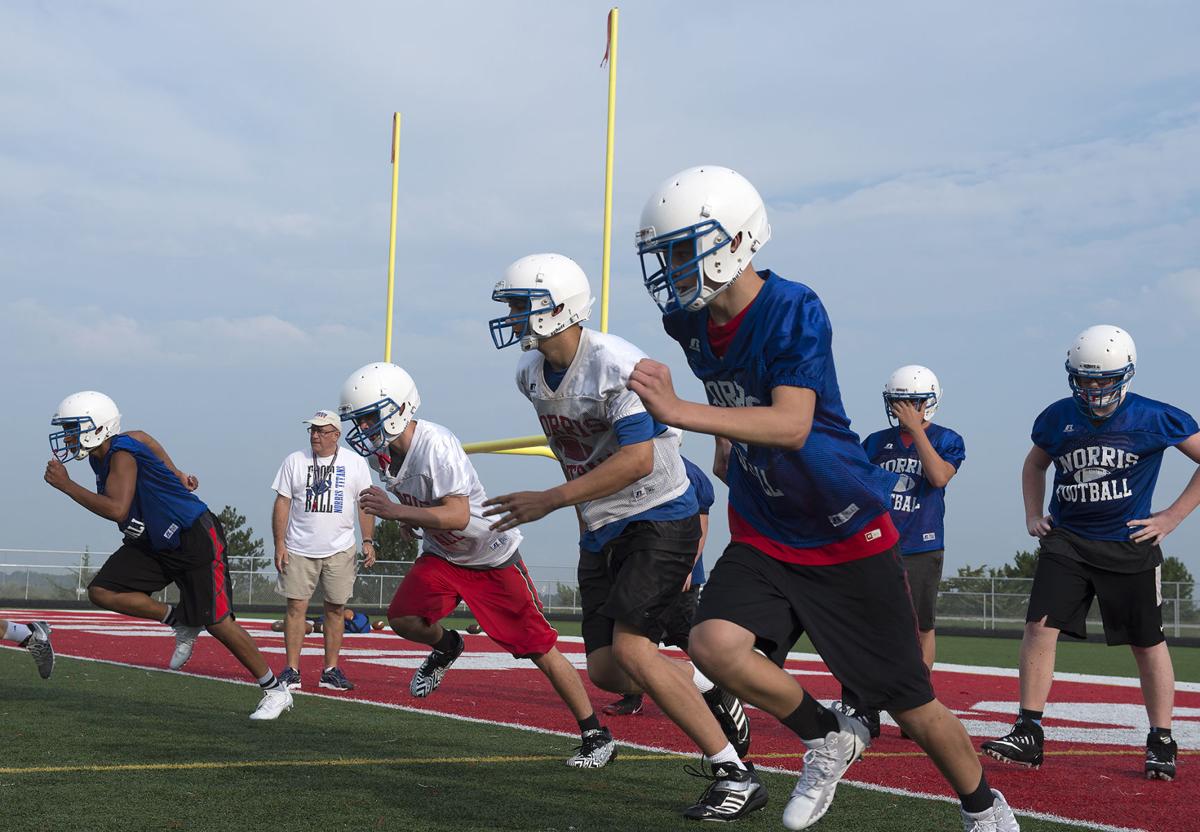 Norris tight ends, corners and centers run drills during the first day of football practice in 2017. 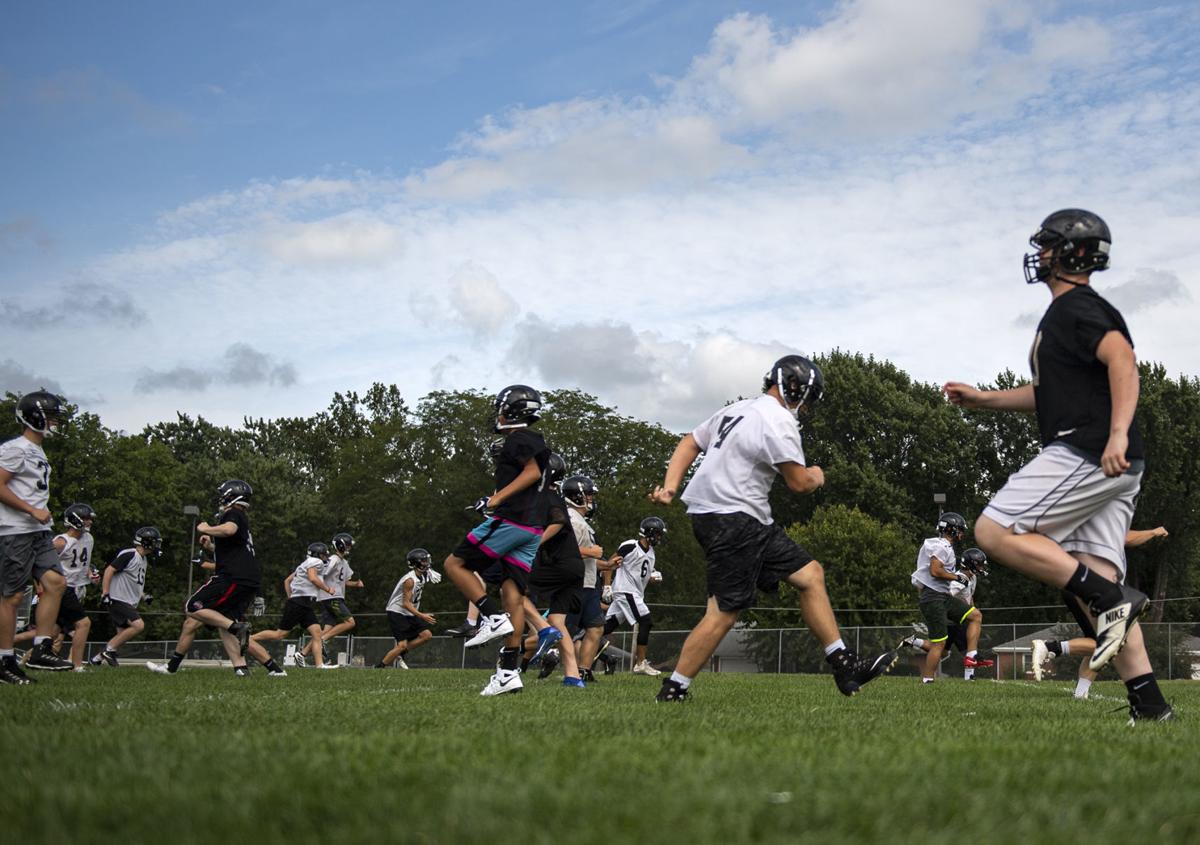 Lincoln Northeast football players warm up for practice in August 2019.

It also may mean the difference between having a season this coming fall and having it canceled by the ongoing COVID-19 pandemic that’s already claimed the spring sports season in Nebraska.

As high school weight rooms open June 1 under strict guidelines set down by both the state and Nebraska School Activities Association, the coaches supervising the workouts are coming up with strategies to adhere to social distancing and sanitizing requirements, while still maximizing what their athletes can achieve.

“We’re telling our kids how we handle this the next few weeks is going to determine whether we’re playing football this season,” Norris football coach Ty Twarling said. “We tell them, ‘You have to follow these guidelines and do this right because if kids or coaches get sick, it’s going to get shut down.’’’

The seven Class A schools in Lincoln aren’t planning to open up their facilities on June 1. The six LPS schools have not set a timetable for allowing students on campus into the weight rooms for voluntary workouts. Incoming Lincoln Pius X athletic director Greg Lesiak said Thursday that the school was leaning toward a June 8 or 15 opening “to get our ducks in a row and make sure we do it right.”

The four area Class B schools, however, are ready to go in eight days, and all of them have plans to accommodate as many of their athletes while fully utilizing both indoor and outdoor facilities in a safe manner.

And while the NSAA guidelines presently call for a 10-person limit in the weight room, gym and any field outdoors for conditioning, the possibility exists that those could be loosened before June 1. At his news conference Thursday, Gov. Pete Ricketts announced that the 10-person limit for public gatherings was being changed to 25.

Twarling said at Norris that there will be six, 50-minute sessions a day with four groups of 10 athletes (40 total) per session. There will be a 10-minute time frame for the coaches to sanitize all the equipment before the next group moves in.

There are separate rooms for cardio and weights at the school, then there will be 10 doing agility and conditioning in the high school’s south gym and 10 more doing similar drills on the turf.

The first three sessions will be for boys, the next two for girls and the sixth session will be a coed mix.

“Everybody will be lifting at least two times a week in addition to speed, flexibility and agility training,” Twarling said. “It’s putting a stress on our facilities and the coaches as well, but it’s better than nothing.”

Before the pandemic, Waverly strength and conditioning trainer Anthony Harms said approximately 300 athletes from all sports at the middle school and high school participated in his summer program. Because of the limits in place, however, the number this year will be in the low 200s, he said, as incoming eighth graders at the middle school will not be allowed to work out, at least not right away.

Harms said Waverly will have three 1-hour sessions a day with some athletes coming in Mondays and Wednesdays and others doing Tuesdays and Thursdays. Each athlete will receive an hour of lifting and an hour of speed and agility work each week.

The high school has two large weight rooms “where we can easily social distance kids 6 feet apart in each one because we usually run 90 kids through them at once,” Harms said. “We’ll be sanitizing everything, all the time.”

There are two gyms that can be used for conditioning in addition to the fields outside.

“The majority of our kids have found a place to lift this spring, either at a health club or somebody’s home gym,” said Harms, who also has put together virtual workouts using body weight for the Viking athletes. “A number of them are going to be in pretty good shape when we get started June 1.”

Newmyer said he hopes restrictions loosen to allow more athletes into each session, which will extend total individual workout time each week.

“My fear is a sport like football, you have to condition your body to get through a football season,” Newmyer said. “With what we have in place now, if we’re not able to expand, it could be a safety issue in the fall. You need these workouts in the summer.”

Each group of 10 athletes will do conditioning on the field first before moving inside to lift weights.

“We’re going to keep our fingers crossed and hope for the best,” Opfer said.

David Lilly was hoping to use the season as a springboard into college. Instead, he ponders what he could have achieved at the state meet.

Bowling is well-established as a club activity across the state, and now it's a sanctioned sport. Girls wrestling fell three votes short.

Kaden Glynn's plan of action for choosing a sport to play in college was turned on its head by the COVID-19 pandemic; now the Beatrice senior-to-be is leaning toward football.

LPS has yet to open the doors of their weight rooms, but York, Beatrice and Ashland-Greenwood are among area schools adjusting to new guidelines.

Guardians signing a waiver. Temperature checks. Masks. Here's a look at how LPS is reopening weight rooms for its student-athletes.

Norris tight ends, corners and centers run drills during the first day of football practice in 2017.

Lincoln Northeast football players warm up for practice in August 2019.