Subscribe
Read Today's E-Edition
Share This
From never having touched a football to a winning record: Ivan and Brice Eloume find love for football at Lincoln Northeast
0 Comments
Share this 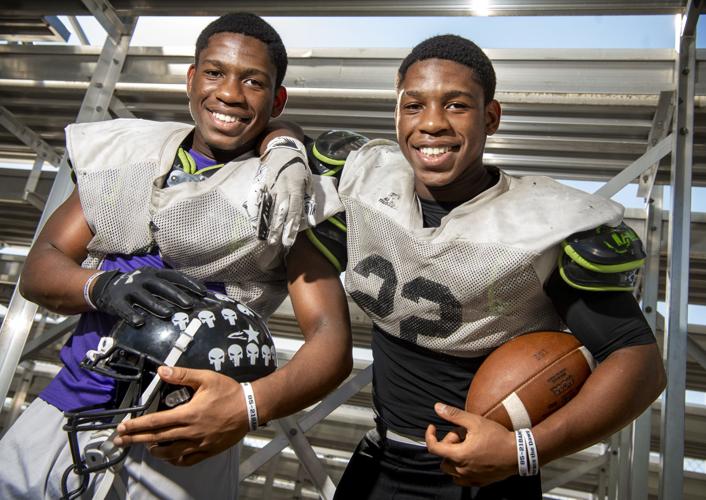 It took a surprise visit by the head coach to convince brothers Ivan (left) and Brice Eloume to try football for Lincoln Northeast. 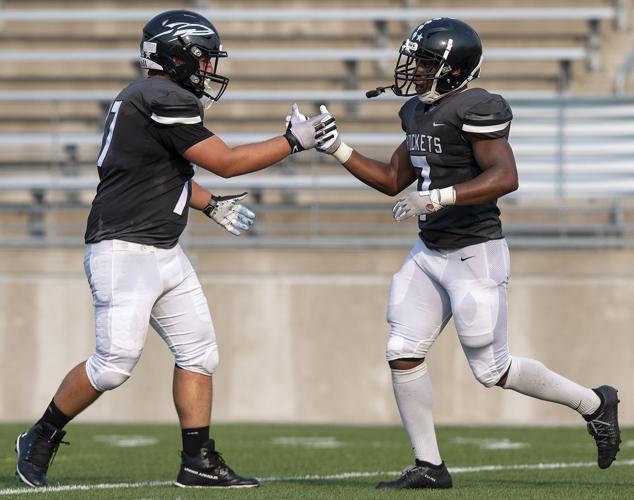 When Lincoln Northeast coaches told Ivan and Brice Eloume to come try out for football, they discovered a much different sport than they anticipated.

Emigrating from Cameroon to the United States in 2015 was a culture shock in its own right, and the twin brothers came to learn that what they call football, Americans call soccer. So, the shoulder pads, the physicality and the rules were all new to the Eloume twins, who initially shied away from football.

Two-Minute Drill: Breaking down and predicting the top Week 4 games, plus Lincoln’s unique week and other notes

Prep Extra Credit, 9/15: Highlighting some of the top performances in football, softball and volleyball

But the members of the Lincoln Northeast coaching staff wanted the Eloumes on their roster and were determined to change their minds.

As for what did it? Try a surprise visit at their home from Northeast coach Dan Martin.

“At first we saw the sport and we were like, ‘Nah, we’re not playing that,’” said Ivan Eloume. “The coaches every day at school would keep asking us to come and try out, but we didn’t want to yet. And then one day Coach Martin and another coach came to our house, and I was like, ‘You guys aren’t going to give up, so we’ll try it.’”

As freshmen and sophomores, simply learning the game was the focus for the Eloumes, who have grown into their own as juniors. Both play out of the backfield on offense and as linebackers on defense, with Brice playing in the middle and Ivan as an outside linebacker.

As twin brothers, competitiveness is always part of their relationship. So far this season, Brice Eloume has 16 tackles and two rushing touchdowns, while Ivan Eloume has 14 tackles and just one rushing touchdown, something the two will rib each other about on end. However, the competitiveness with each other doesn’t matchup their determination to pick up wins as a team.

“We like to talk a lot and when we make a mistake we see if we can fix it together,” said Brice Eloume. “It’s fun making plays together and we just enjoy playing.”

It’s been even more fun this year to play for a winning team, since the Rockets have won back-to-back games over Lincoln North Star and Omaha Northwest. The twins have been key contributors as two-way players, and Ivan Eloume even filled in at kicker over the last two weeks, going a respectable 8-for-11 on extra points.

The Eloumes both also play for the Rockets’ soccer team, the sport they had initially envisioned playing in high school. However, there are no regrets that they gave football a chance.

“I never really even touched a football before I got to Lincoln Northeast,” Ivan Eloume said. “Ever since I tried it, I love every chance I get to put the pads on.”

Prep football game of the week: Behind strong running backs and defenses, ‘mirror images’ Southeast and Prep ready for Class A showdown

In terms of personality, both Ivan and Brice Eloume seem to naturally have a smile and are waiting to crack a joke whenever possible. They’re close with each other, and happy to support each other in pretty much anything, although Ivan insists he’s the more responsible twin.

“It depends,” said Brice Eloume with a sheepish grin on his face.

But, one thing is for sure — Northeast wouldn’t be where it is this season without the help of the Eloumes. In just three years, they went from never having played football to becoming varsity starters on a winning team. That journey may have taken some time, but they’ve certainly grown along the way.

“I’m starting to love football even more than I thought I could, because this sport is amazing,” said Ivan Eloume. “The things you learn make you grow so much, not just as a football player but as a person because of these life experiences; I’m amazed at how much I’ve grown.”

High school football Week 3 is in the books. Here's all of the Journal Star's content, in one spot

Week 3! Our team was out around the city and area to uncover all of the stories that came out of Friday night — here's what we got.

In defensive battle, Kroger breaks free for 90-yard TD run to lead Class B No. 4 Elkhorn past No. 3 Waverly

With defenses ruling the night it was an explosive offensive play that proved to be the deciding factor between Elkhorn and Waverly.

Need to catch up on Week 3 action? Here's a good place to start. We check in on the city, state, No. 1 teams and more in this "rewind."

Elan Pittman's interception in the end zone provided an exclamation point for the Knights' defense, which came up big in a winning effort.

Gavin Sukup was involved in all four first half touchdowns in leading Seward to a 27-13 halftime lead.

No. 2 Bennington gets past No. 6 Norris with second-half surge, late interceptions

Class B No. 2 Bennington put on a second-half surge to topple No. 6 Norris 35-20 Friday at Bennington High School.

After comeback stunner, No. 10 Spartans bounce back in a big way against Norfolk

After a come-from-behind loss last week, the Spartans made sure there was no comeback Friday.

Lincoln Northeast forced three turnovers in the first quarter to run away with a lopsided win.

Welcome to the Prep Extra Podcast presented by the Lincoln Journal Star.

The Storm is rolling after a lopsided loss earlier this month — "We talked to our players afterwards and said, 'There's two ways this can go.'"

'We pretty much controlled the line of scrimmage': Creighton Prep asserts itself in Class A picture by rolling LSE

A lethargic, mistake-filled first quarter put No. 4 Lincoln Southeast in a 20-0 hole, and Class A No. 7 Creighton Prep never budged from there.

No. 2 Millard South tightens screws defensively after first-half shootout to knock off No. 1 Bellevue West

The two teams combined for over 700 yards before halftime. Whatever the halftime speech was by the Patriots’ defensive coaches, it worked.

It's Friday night in Nebraska. And high school football is in full swing as teams across the area and state line up for Week 4 action.

After walk-on commitment at Nebraska, Lourdes CC’s Miller sets his sights on another key goal: a state title

Lourdes CC’s senior class believes this is their year. Miller’s skills are a big reason why Lourdes CC is off to a 4-0 start as the No. 3 team in Class D-1.

It took a surprise visit by the head coach to convince brothers Ivan (left) and Brice Eloume to try football for Lincoln Northeast.