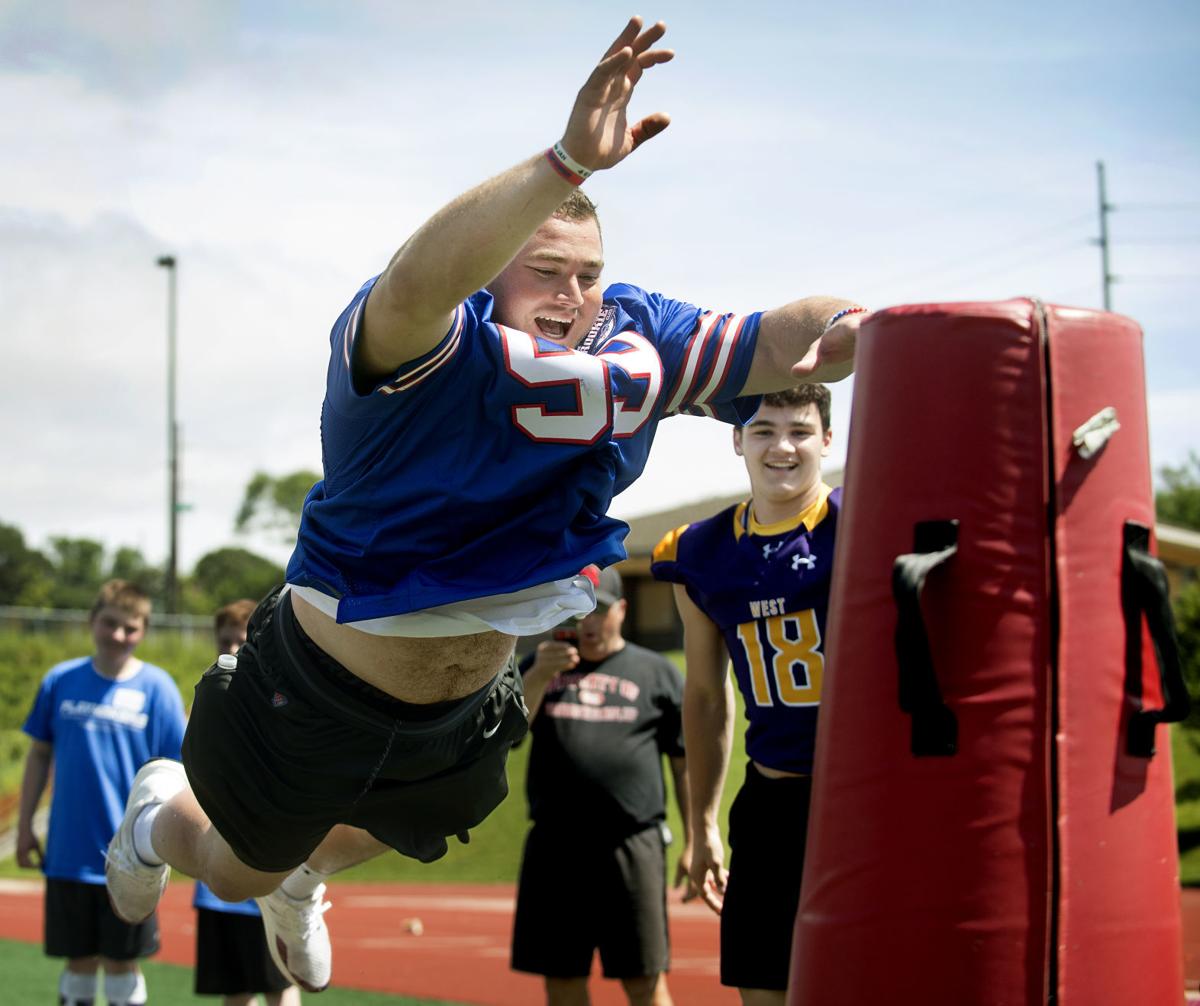 Buffalo Bills defensive tackle Harrison Phillips shows his pro form as he demonstrates a flying leap into a padded dummy last summer during a free football camp put on by the Millard West and Stanford alum. 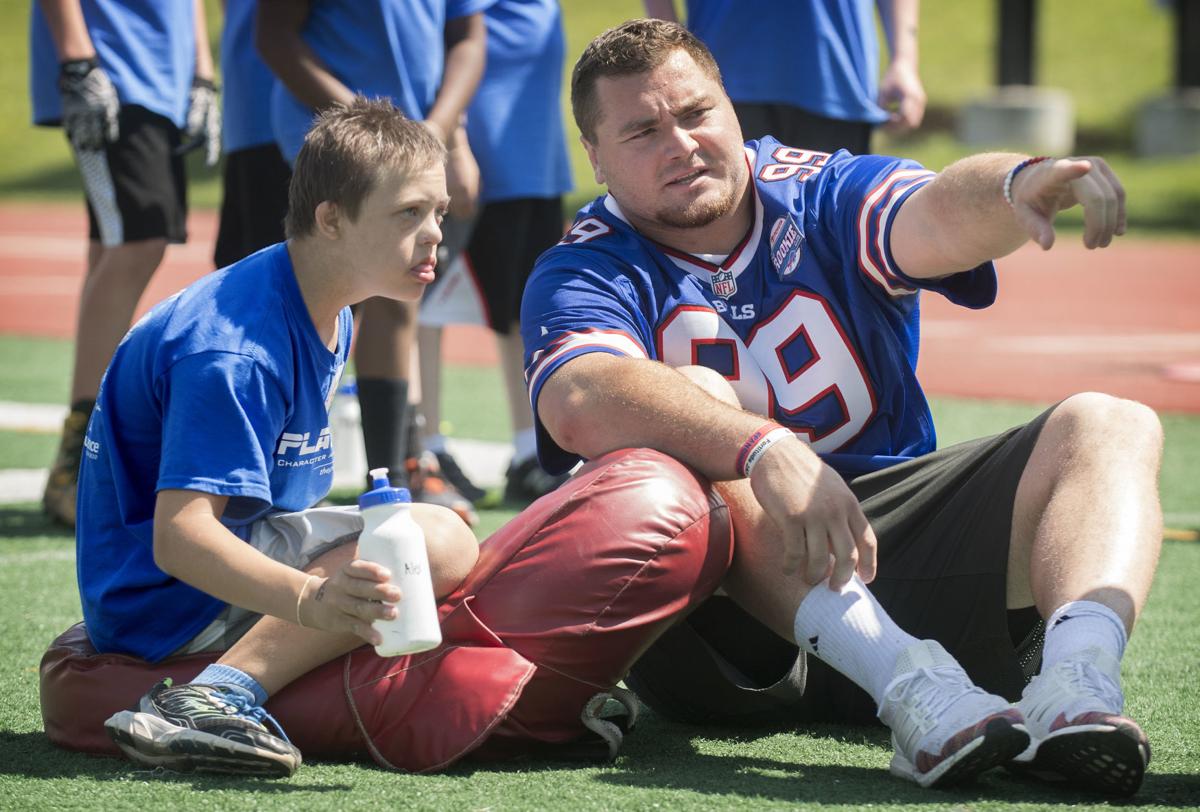 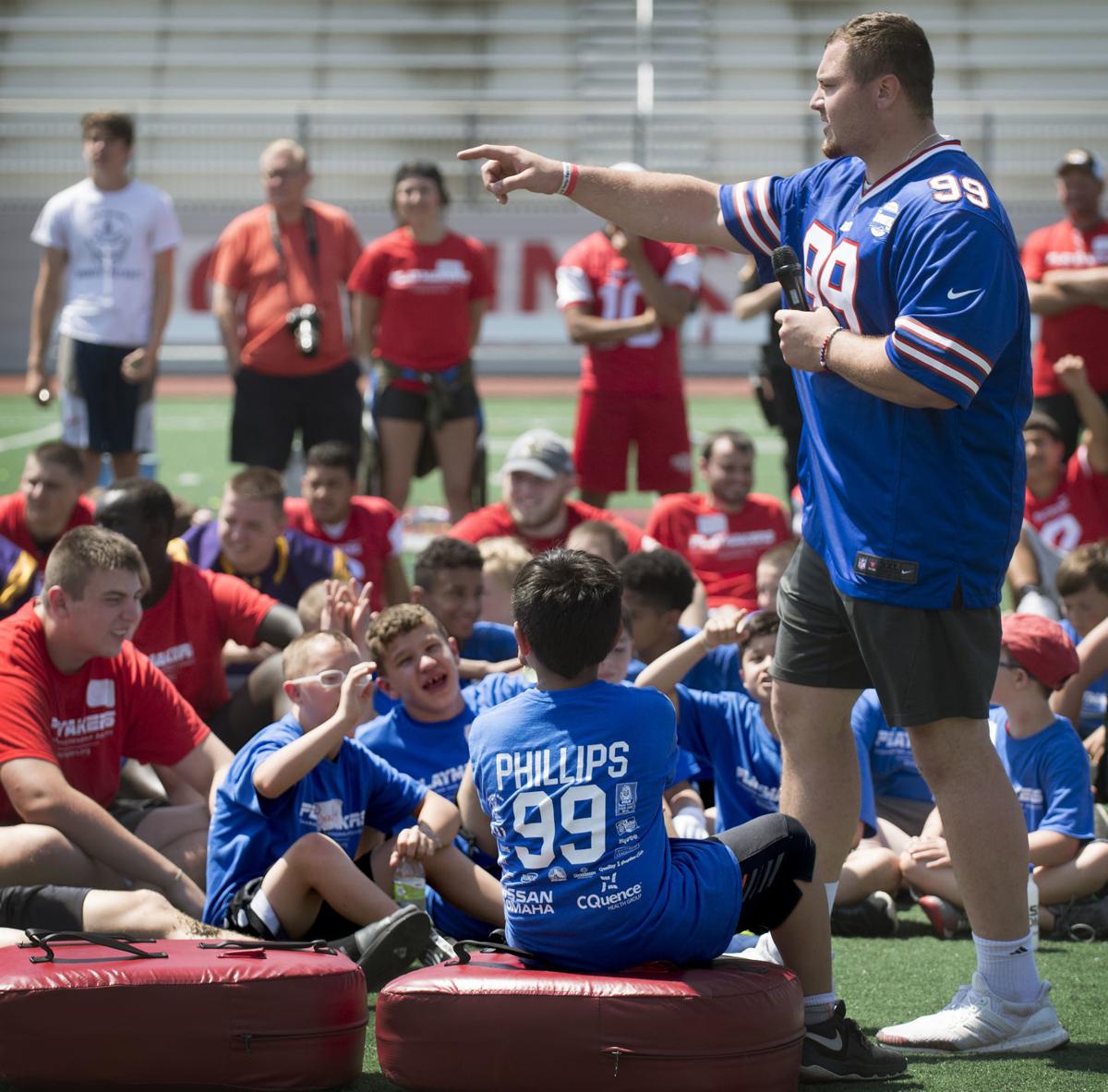 Buffalo Bills defensive tackle Harrison Phillips takes questions from the campers before lunch Saturday during a free football camp put on by the Millard West and Stanford alum.

OMAHA — For former Millard West standout defensive lineman and current Buffalo Bill Harrison Phillips, Saturday was about more than just holding a football camp, it was about helping support a community that gave so much to him growing up.

The camp was set up for special-needs and at-risk students in the Omaha area from third to eighth grade with the goal of providing a football environment for children who otherwise wouldn’t have the chance to play football and experience the character-building the game provides.

“My best day of the week is whenever I’m hanging out with these kids,” Phillips said. “To blend the gap with these kids, who possibly wouldn’t get the chance to play competitively without a camp like this, and introduce them to sports during one of the most crucial times of their development, is special. Sports help bring social skills and confidence skills, and that’s our goal.”

After Phillips’ time at Millard West, where he was named Nebraska Gatorade Player of the Year in 2013, he headed to Stanford to play college football. His time with The Playmakers, an organization focused on integrating football skills and character lessons, began his freshman season with the Cardinal and has only grown since.

In 2018, Phillips was drafted in the third round by the Bills. One of his first goals was to give back to the area that raised him.

“I’m going to be an Omaha guy all my life, so I’m very happy to have the camp here,” he said. “Hopefully we’re going to be able to grow and get it as big as we can with more sponsors and kids each year as well as multiple camps. Omaha raised me, and so I want to give back to it as much as I can.”

Phillips’ praise for Omaha and Nebraska continued as the camp began with the players running through the high school players and onto the field.

“With how many kids we have out here and so many players helping, it just restores your faith in humanity,” he said. “All these people are out here to do good, and it makes me incredibly humble to see the community come together for this event.”

The camp featured several drills as well as team- and character-building games, and over its more than five hours included demonstrations from the Omaha Fire Department and the Omaha Police Department.

With the first camp a success, Phillips hopes it will continue to expand and affect even more children next season.

“It’d be great to see 500 kids out here,” he added. “With a few more sponsorships, hopefully we’ll be able to open it up to high schoolers next season, so those are my goals right now.”

Next up for Phillips will be starting his second NFL season at Bills training camp — it opens July 25.

William Nixon, a three-star class of 2020 prospect from Waco, Texas, will announce his college choice Monday afternoon via Twitter, according …

After 16 years, Boehm steps down from role in NU athletic administration

Buffalo Bills defensive tackle Harrison Phillips shows his pro form as he demonstrates a flying leap into a padded dummy last summer during a free football camp put on by the Millard West and Stanford alum.

Buffalo Bills defensive tackle Harrison Phillips takes questions from the campers before lunch Saturday during a free football camp put on by the Millard West and Stanford alum.