Class B: Behind Gutschow and a key turnover before halftime, Elkhorn wins state title on home field
0 comments
Share this
{{featured_button_text}}
1 of 2 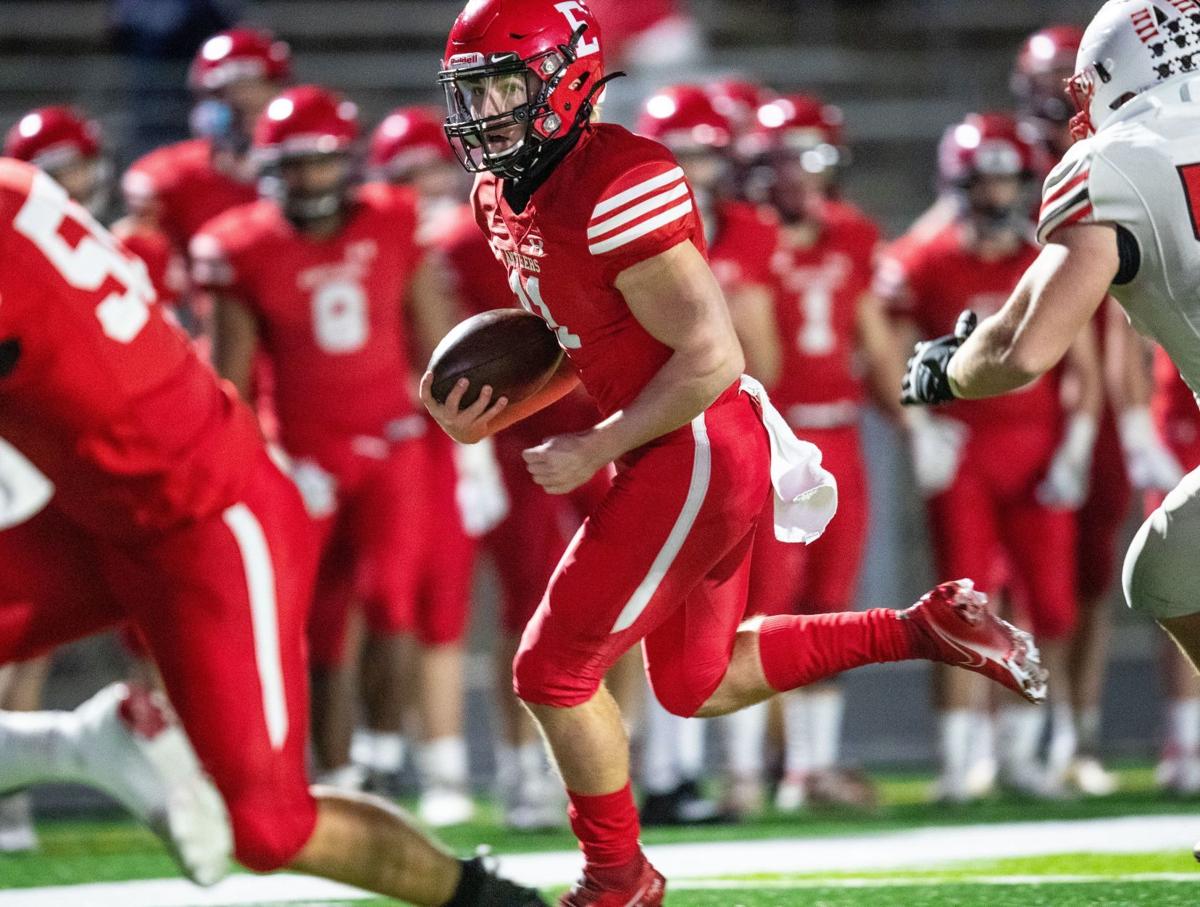 Elkhorn quarterback Grant Gutschow scores a third-quarter touchdown against Aurora to give the Antlers the lead in the Class B state championship game in Elkhorn. 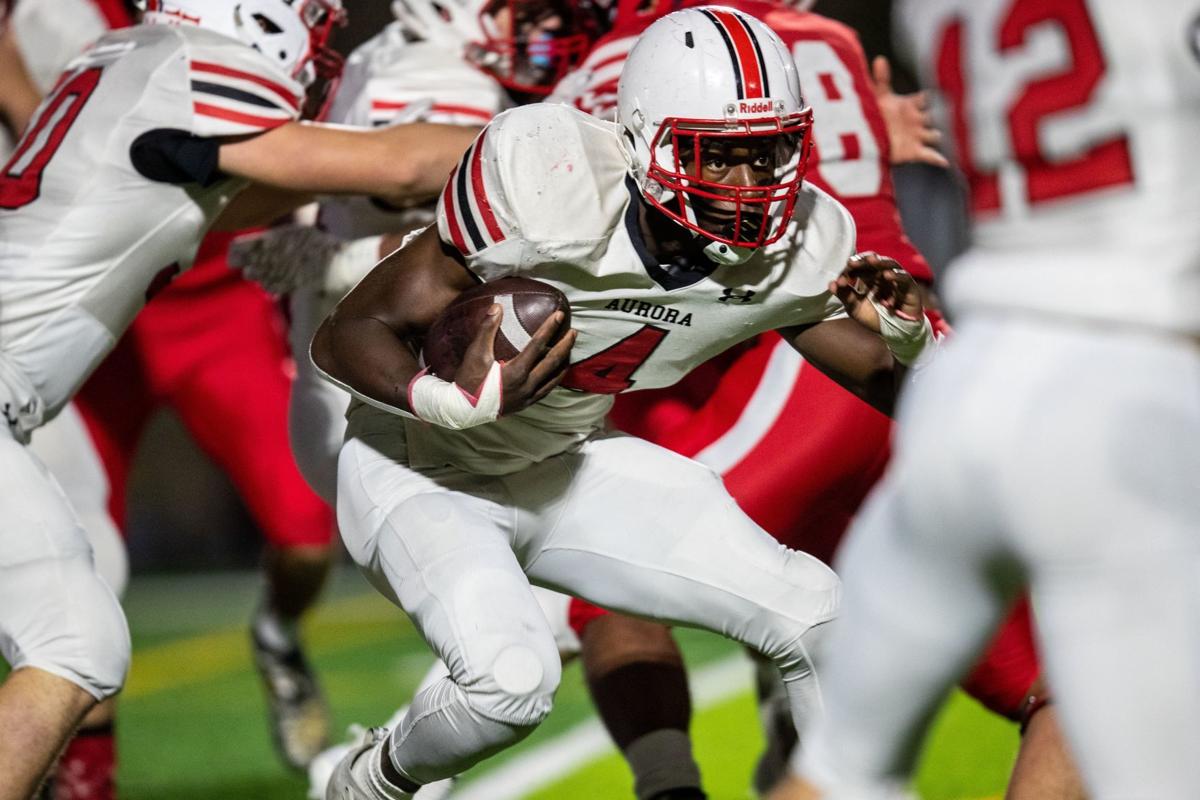 Aurora's Mack Owens runs the ball on his team's first drive against Elkhorn during the Class B state championship Friday in Elkhorn.

OMAHA — Elkhorn and Aurora were locked in a tightly contested Class B state championship game Friday, but a string of game-changing plays vaulted the No. 4 Antlers to a 42-19 victory and their first state title since 2011.

Aurora had the ball in the red zone and looked poised to break a 13-13 tie right before halftime but fumbled, and Elkhorn's DJ Robinson-Long recovered it to shift the momentum to the Antlers' sideline.

Elkhorn then marched down the field in five plays to open the second half, and quarterback Grant Gutschow scored one of his three rushing touchdowns to give his team the lead.

Gannon Gragert picked off Aurora quarterback Ethan Shaw on the ensuing drive, then caught a 22-yard fade route on fourth down for a score. The defense forced a three-and-out, and Nebraska walk-on recruit Aiden Young ran untouched for a 46-yard touchdown to break the game open at 35-13.

Elkhorn coach Mark Wortman said it was the fumble recovery at the end of the half that was key to sparking the run.

“That was one of the biggest plays of the game,” he said. “If they go up by seven at half, we’re struggling. That was huge. We kept saying, 'Stick with it, things happen, there are things like fumbles and interceptions,' so it was perseverance on our part.”

No. 8 Aurora (9-4) had the momentum early. They used up most of the first quarter with a 17-play game-opening drive, capped by a 16-yard scoring run by Shaw on fourth down. The teams traded scores before Young returned a kickoff 75 yards for a touchdown to tie the game at 13.

That set the stage for the momentum shift.

“They’re a really good football team, and you can’t have self-inflicted wounds like turning the ball over on their side of the field and win games like this,” Aurora coach Kyle Peterson said.

The Huskies moved the ball well for much of the night, led by 109 rushing yards from Mack Owens and 240 total yards from Shaw. But three turnovers helped tip the balance in favor of Elkhorn (11-2).

The Antlers accomplished the rare feat of winning a state championship on their home field — none of the state title games this season were played at Memorial Stadium in Lincoln due to COVID-19 concerns.

“We’d all love to be in Memorial Stadium,” Young said. “That’s what we worked hard for. But there’s no better feeling than winning a state championship on your home field. Elkhorn knows about that, and this is where we belong.”

The senior finished with 14 carries for 104 yards to go along with his kick return for a score. Gutschow completed 5 of 9 passes for 191 yards, including the crucial score to Gragert in the third quarter. Gutschow also rushed for 44 yards.

The state championship was the sixth of Wortman’s 41-year head-coaching career. He said this one is satisfying, especially since it came on the team’s home field.

Peterson said he was proud of his team, and he made sure to tell them just that after the game.

“The message is be incredibly proud of the journey that you guys went on,” he said. “It hurts right now, and if it didn’t hurt, it wasn’t worth it.”

Class C-1: Pierce returns to the top behind senior experience and a talented sophomore duo

Timely turnovers on defense and some big plays from Abram Scholting on both sides of the ball led the way for the Bluejays.

Class C-2: First state title 'means a lot' for Ord as Chanticleers finally get over hump

For the first time in school history, the Ord Chanticleers are football state champions.

Dundy County-Stratton stopped the Longhorns on fourth down in the second overtime to claim the D-1 title with a 42-36 victory.

A quintessential small-town high school football scene as the backdrop, BDS continued its come-from-behind ways to claim a state title.

Well, here we are. Through the twists and turns, the state makes it to the final round. Follow us for live coverage of the state football finals.

“It was surreal,” McDonald said. “I started with those guys as a freshman and ended it with them this year. I feel that can never be matched."

With COVID-19, just playing games made for a successful football season

There are many kinds of success. But just being able to play a high school football season in the COVID-19 era was an accomplishment.

With the championship games over, here's how Ron Powell sees the Nebraska high school football climate as we head into the winter.

Here's a look at the final numbers from the 2020 season.

Gross led McCook to 22 Class B state playoff appearances, and state championships in 2002 and 2003.

Elkhorn quarterback Grant Gutschow scores a third-quarter touchdown against Aurora to give the Antlers the lead in the Class B state championship game in Elkhorn.

Aurora's Mack Owens runs the ball on his team's first drive against Elkhorn during the Class B state championship Friday in Elkhorn.