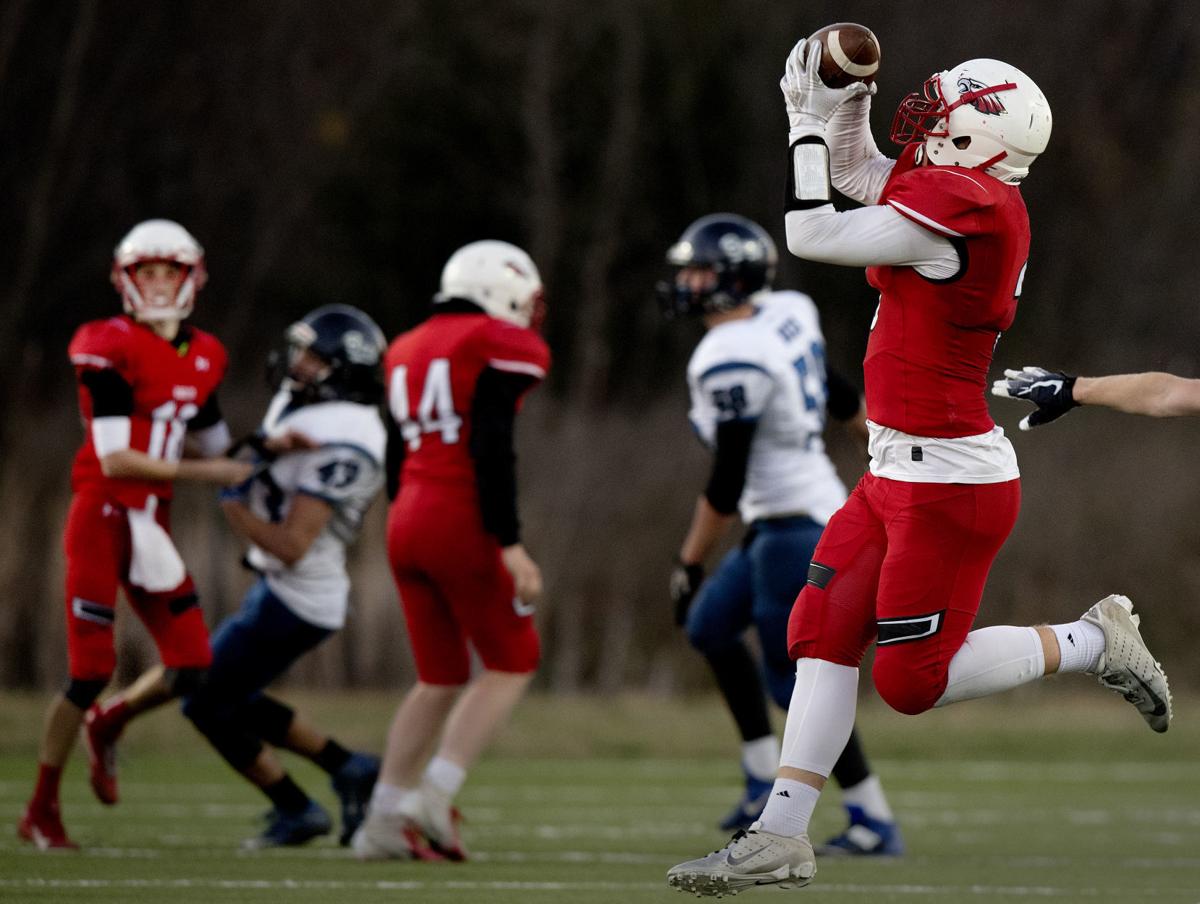 Johnson-Brock's Kaden Glynn (right) catches his fourth touchdown pass from quarterback Cole Fossenbarger (left) in the fourth quarter against Bloomfield on Tuesday during a Class D-2 quarterfinal in Johnson. 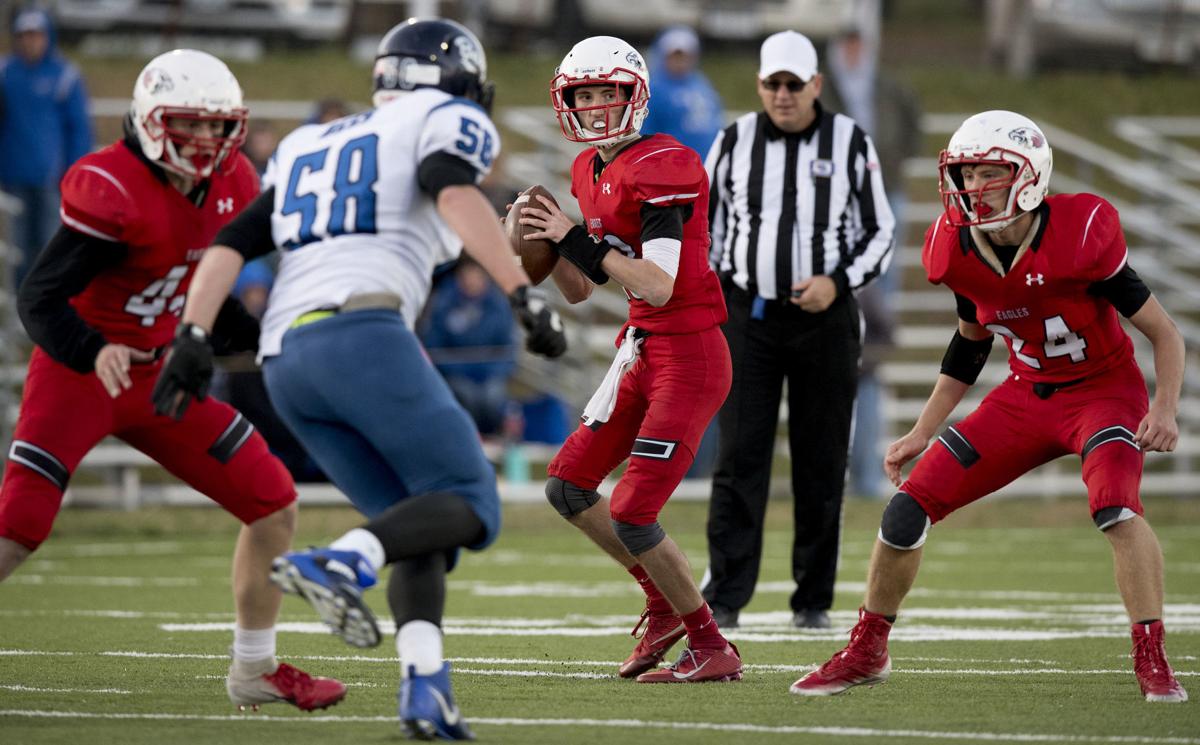 Johnson-Brock's Cole Fossenbarger (center) looks for an open receiver against Bloomfield in the fourth quarter Tuesday during a Class D-2 quarterfinal at Johnson-Brock High School.

JOHNSON — Top-ranked Johnson-Brock used big plays all night long to take down No. 6 Bloomfield 72-32 in Johnson on Tuesday night and punch a ticket to the Class D-2 state semifinals.

This will be the second time in school history Johnson-Brock will play in the semifinals, the other time being in 2009.

Cole Fossenbarger was a big reason the Eagles dominated, as he threw for 442 yards and seven touchdown passes, and ran for another TD.

“Big plays is what we live off of,” Fossenbarger said. “But it’s nothing new to us; it’s what we have been doing all year.”

The large chunks of yardage may not be new for the Eagles, but the semifinals are.

Johnson-Brock was turned away by Howells-Dodge in the quarterfinals last season, and Fossenbarger and the Eagle seniors made sure that wasn’t going to happen this time.

Bloomfield didn’t prove to be much of an obstacle in that plan — Johnson-Brock had scores of 71, 65 and 20 yards in the first half alone.

Senior wide receiver Ty Hahn racked up 165 yards receiving and a touchdown in the first half. Dylan Rowe scored twice in the first half, too, and his 65-yard touchdown reception with two minutes left in the half gave the Eagles a 36-6 halftime lead.

“We just trust our athletes on the outside,” Eagle coach Mitch Roberts said. “They did really well tonight.”

The domination carried over to the second 24 minutes as well.

After Bloomfield’s Branston Gieselman rumbled in from 4 yards out in the third quarter, the Eagles rattled off two scores in a row.

“We got playmakers and I can trust all of them,” Cole said. “That is just something you have to respect with us.”

Bloomfield coach Matt Kuchar reiterated that respect for Johnson-Brock after the contest.

“They have some absolute studs at receiver,” Kuchar said. “Anytime they wanted to, they could just throw it up and their receivers were money.”

“We know we’re going to have to play a great football team,” Roberts said. “We’re going to celebrate this one tonight and then we are back to work tomorrow.”

Wahoo RB Luben producing in all types of conditions

Trevin Luben’s speed and elusiveness makes him an ideal running back in perfect football conditions.

The road to Lincoln is getting shorter. Each class has four remaining teams, and after tonight, the championship matchups will be set in Class A, B, C-1, C-2 and six-man.

Scores and schedules from the high school football playoffs.

Two-Minute Drill: Neumann, Wahoo on the road for their C-1 semifinals

A quick look at the Class C-1, C-2 and six-man semifinal matchups set to take place on Friday in the latest Two-Minute Drill from Ron Powell.

When the Class C-2 football playoff brackets came out, a draw that might’ve forced a lot of coaches to cringe made Sutton coach Steve Ramer ce…

Wemhoff's kickoff returns open the floodgates for Flyers in win over No. 2 Sacred Heart

When Tim Williams became head football coach at Waverly in 2014, he chose the current senior class, when they were eighth graders, as the group he would use as the foundation for the program he wanted to build. He used the weight room as the construction area, and he found plenty of athletes willing to follow the blueprint.

Two-Minute Drill: Rematches headline the A, B semifinals

Ron Powell looks ahead at the Class A and Class B high school football semifinals.

Ron Powell takes a quick look at the D-1 and D-2 semifinals in high school state football set to take place on a chilly Monday afternoon.

HUMPHREY — Running around or through the physical Humphrey St. Francis defensive line and linebackers didn’t seem to be an option for top-rank…

Johnson-Brock's Kaden Glynn (right) catches his fourth touchdown pass from quarterback Cole Fossenbarger (left) in the fourth quarter against Bloomfield on Tuesday during a Class D-2 quarterfinal in Johnson.

Johnson-Brock's Cole Fossenbarger (center) looks for an open receiver against Bloomfield in the fourth quarter Tuesday during a Class D-2 quarterfinal at Johnson-Brock High School.