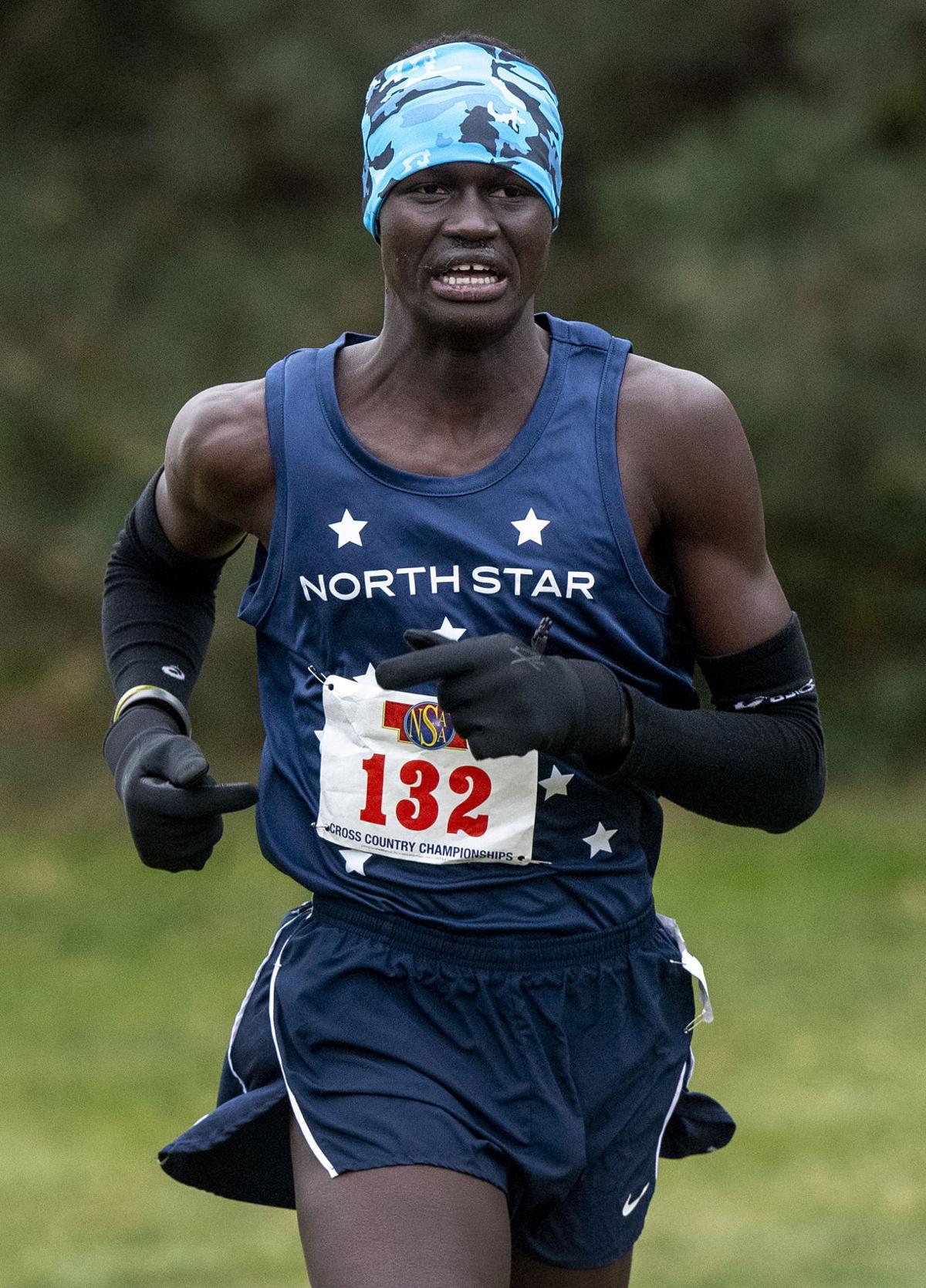 Lincoln North Star's Liem Chot captured his third state title in a row in the Class A boys race at the state cross country meet Oct. 23 at Kearney Country Club. 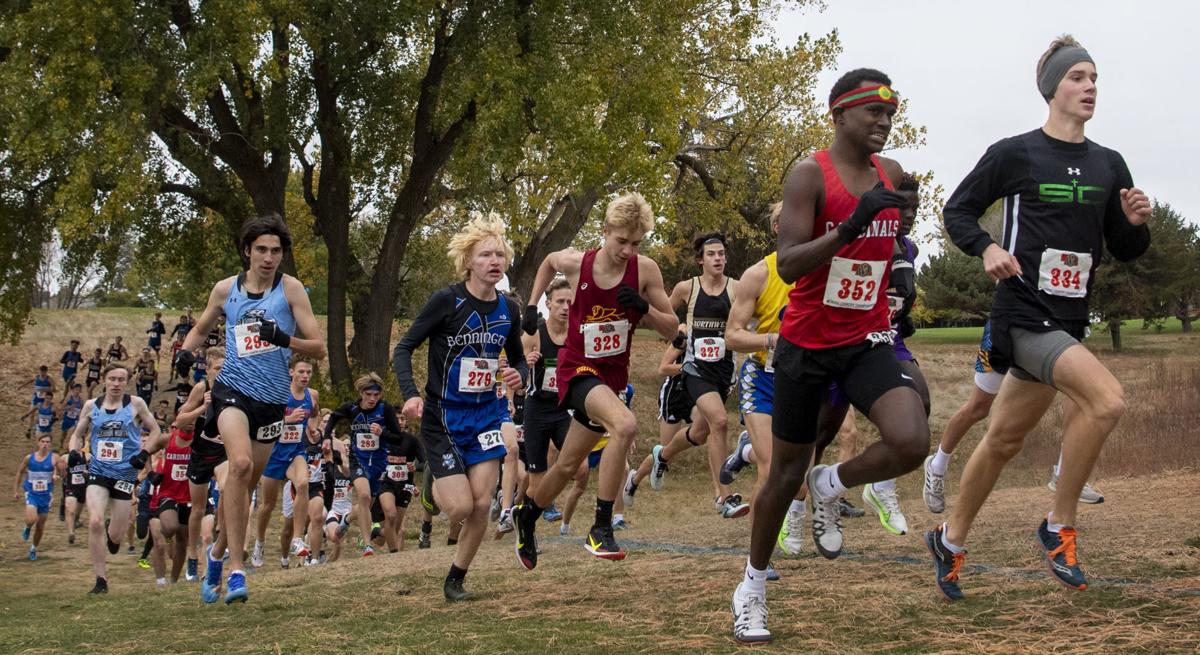 Omaha Skutt's Ryan Zavadil (334) missed part of the season due to COVID-19, yet finished in second place in the Class B boys race at the state cross country meet at Kearney Country Club on Oct. 23. 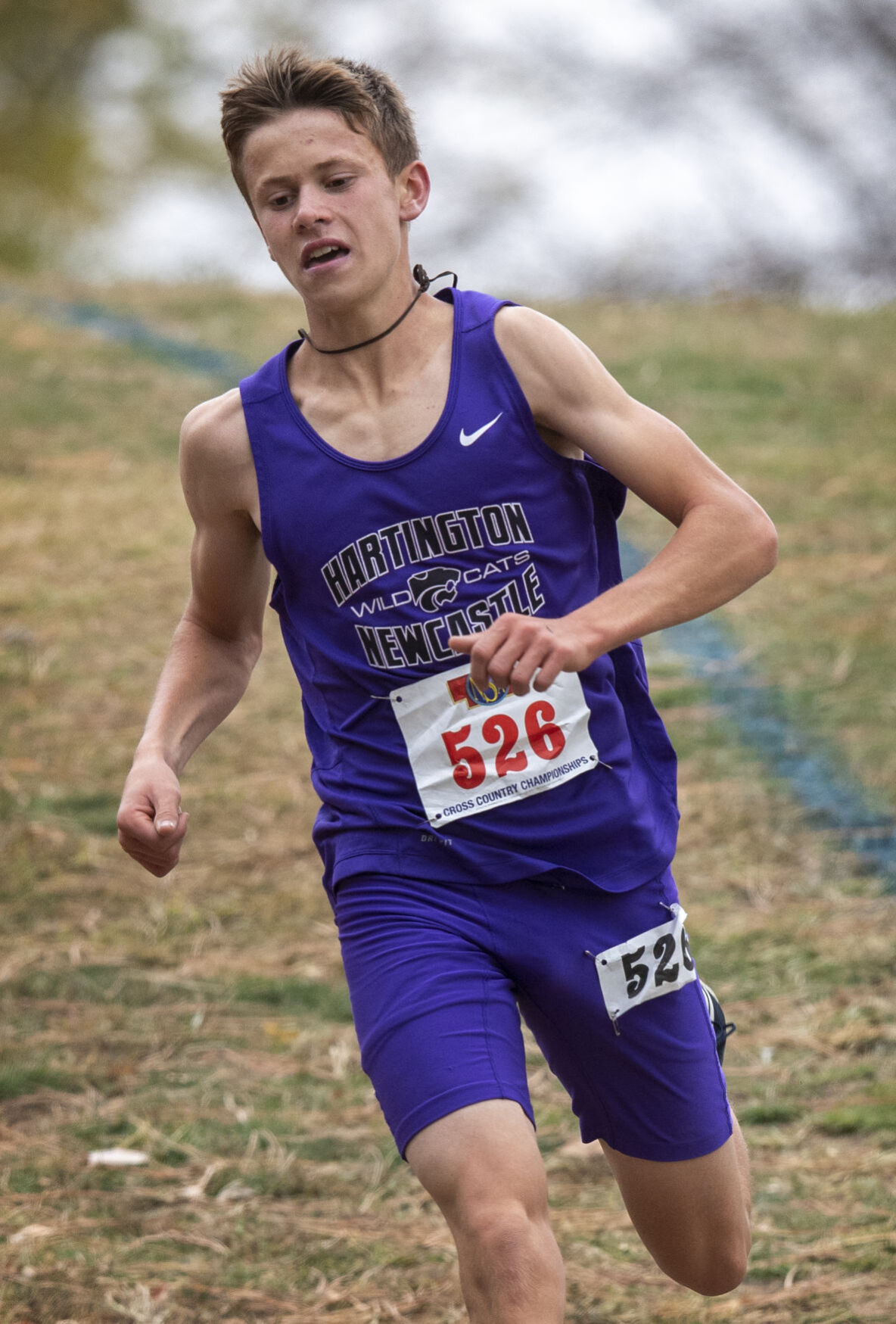 Then he came back to state in 2019 and did it again, and Friday the Lincoln North Star senior won a third consecutive state championship.

Now that his prep career is over in this sport, that’s what he’s most proud of in a long list of accomplishments. Each summer, runners motivated to try and beat Chot would train. And in the biggest meet each year nobody could do it.

“Being able to defend my title (two times), I’m only the (third) ever Class A guy to do it, so it’s a big deal, and I’m really, really proud of that,” Chot said.

He's only the sixth three-time champ in all classes in the 60 years of the boys meet.

Chot wasn’t able to repeat as the all-class winner. That went to an impressive showing by Carson Noecker of Hartington, who won Class C in 15:22. That's the fastest time at state in all classes in four years. He’s the first Class C runner to break 16 minutes in about 30 years.

But Chot, who moved to the U.S. about six years ago, improved his school-record time by 4 seconds and wasn’t overly disappointed.

“I didn’t run as fast as I wanted, but it’s a good race overall,” he said.

There were challenging conditions for the athletes, with wind chills in the 20s and a few snow flurries. Chot admittedly may try to run in college at a warm weather school, but he wasn’t bothered by the cold.

“A lot of people thought that was my weakness, running in the cold, but this past winter I was able to train with short shorts and a light shirt. My body got used to it,” Chot said.

Chot only led by a few strides at the 1-mile mark, but was feeling good about his chances to win after the second mile.

“I noticed that my competitors were not feeling the best, so I just picked it up at the two-mile and I got 5 meters of a lead, and I was like, ‘OK, I got this,’” he said.

Chot was undefeated this year, won 20 of 23 races since his sophomore year and hasn’t finished lower than third in that stretch. He set three course records this year.

Fremont won the Class A team title for the ninth time, which is tied for fifth-most all-time for a boys program. Chot helped North Star finish fourth.

In Class B boys, Omaha Skutt had a 1-2 finish with seniors Isaac Richards and Ryan Zavadil, respectively.

“It feels amazing,” Richards said. “We’re going to have a really good score.”

Zavadil finished second at state despite facing some adversity after testing positive for COVID-19 earlier in the season. He missed two meets and had to practice on his own for a while. He felt the impact of the disease in his lungs sometimes, but says he was fortunate.

Davis won state both years he ran cross country, as a junior and senior, after playing football his first two years.

“Just to think that I barely went out for cross country in the first place, let alone to win back-to-back state championships. All glory to God,” Davis said.

Now Davis may run cross country in college at Nebraska-Kearney.

Photos: Going for gold and braving the cold at state cross country meet

A decorated runner, Chot won the Class A state cross country meet in each of his final three years of high school.

Born in a refugee camp in Ethiopia, one of the best runners in state history came to the country seven years ago after both of his parents died.

Lincoln North Star's Liem Chot captured his third state title in a row in the Class A boys race at the state cross country meet Oct. 23 at Kearney Country Club.

Omaha Skutt's Ryan Zavadil (334) missed part of the season due to COVID-19, yet finished in second place in the Class B boys race at the state cross country meet at Kearney Country Club on Oct. 23.