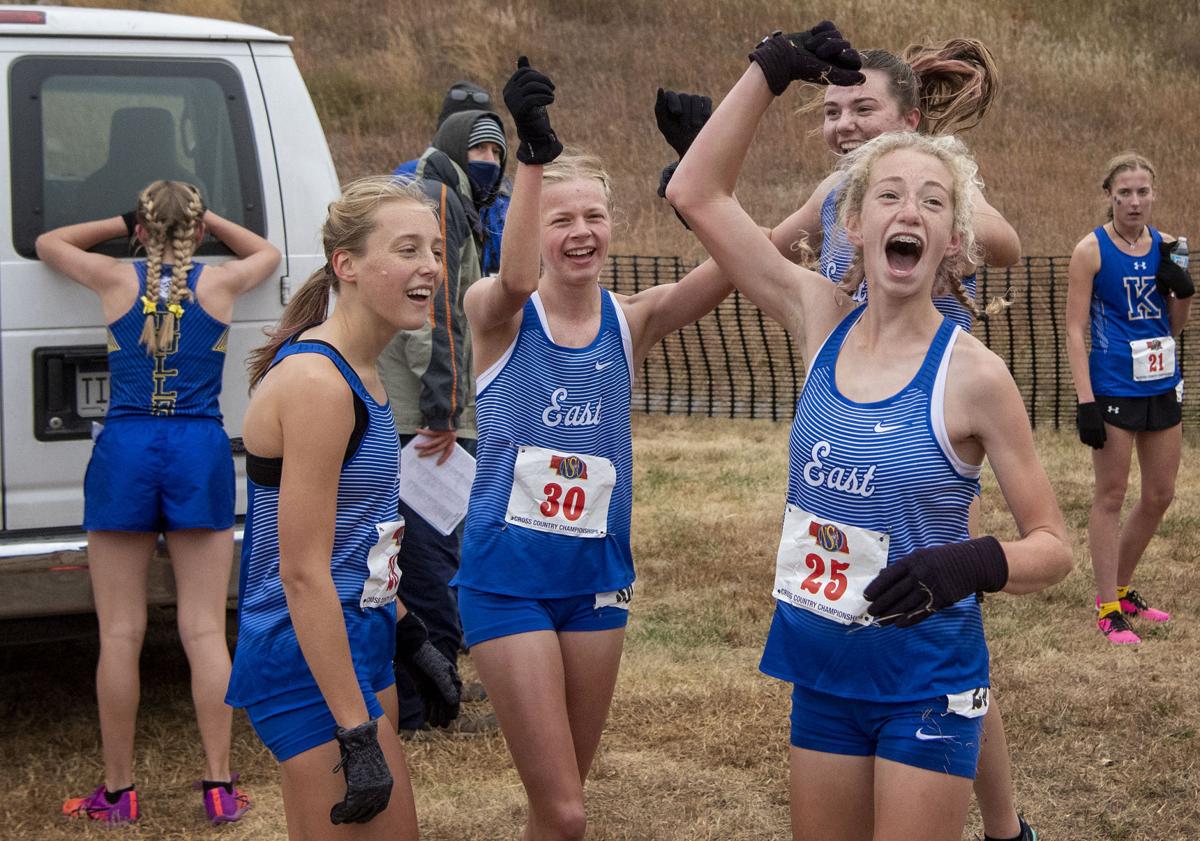 Lincoln East's Izzy Apel (25) and teammates Jenna Muma, Peyton Svehla and Berlyn Schutz celebrate their Class A girls team title as they take in cheers from the fans in the crowd at the state cross country meet Oct. 23 at Kearney Country Club. 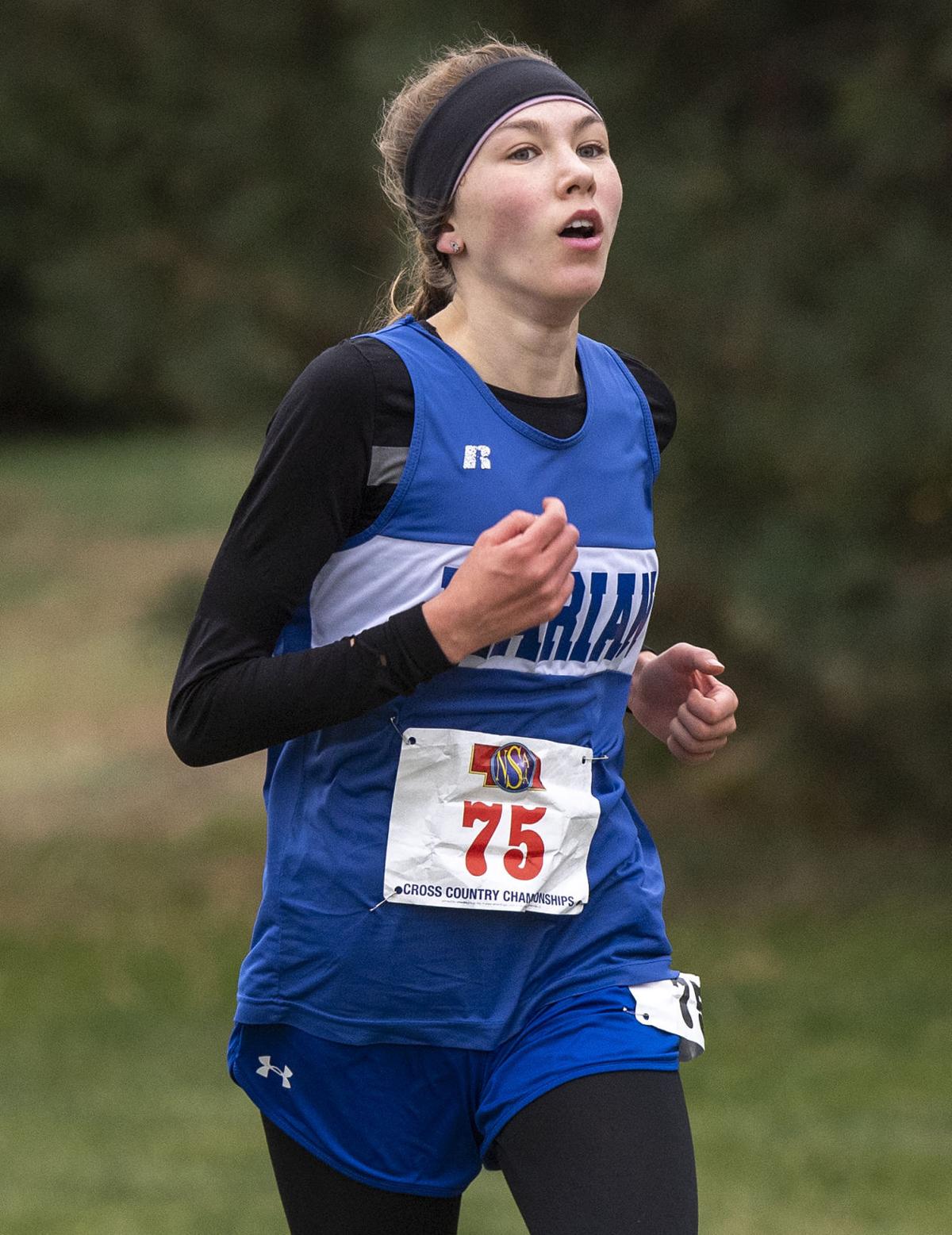 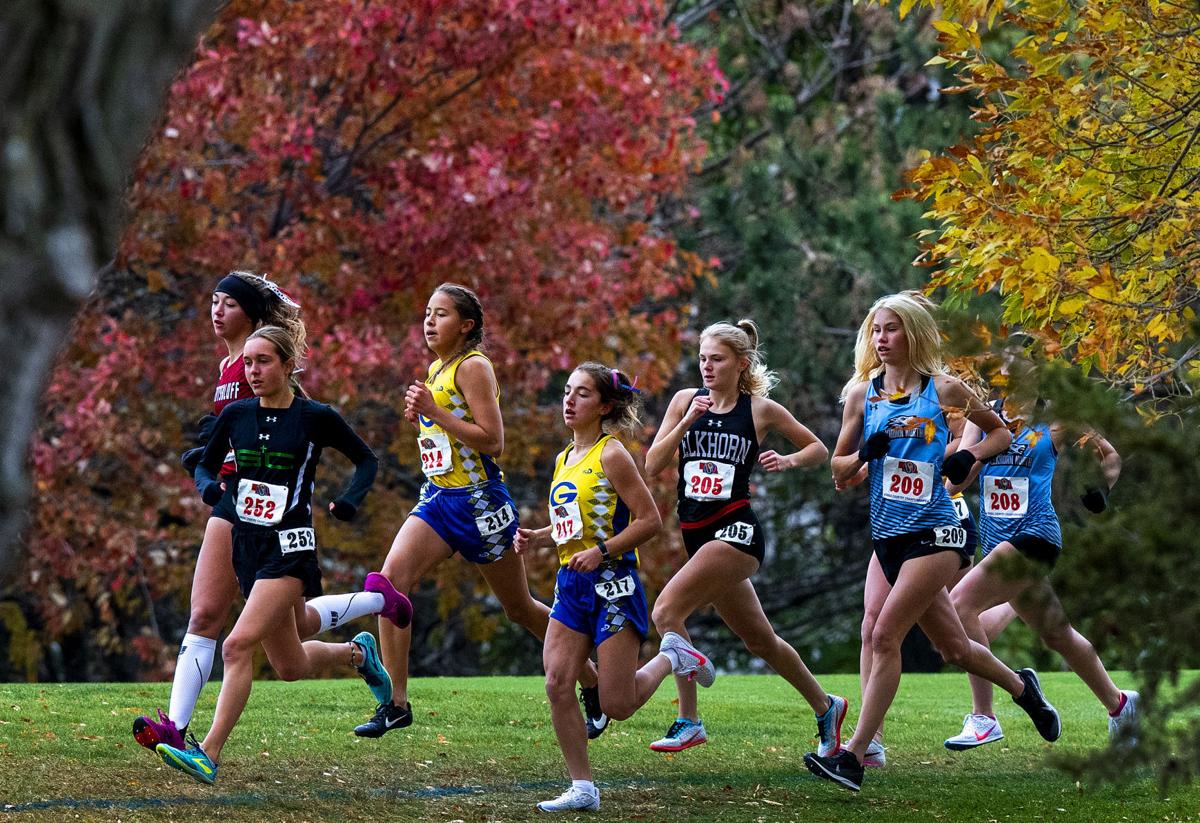 The Class B girls leaders race through fall colors at the state cross country meet at Kearney Country Club on Oct. 23.

For the Lincoln East girls cross country team, maybe this year it is.

“A lot of stuff you see on social media and hear, it was a two-horse race (with No. 1-ranked Fremont and No. 2 Lincoln Southwest),” said Lincoln East coach Brian Kabourek. “We were bound and determined to make it a three-horse race.”

They did, and East is still the team out in front in Class A.

The Spartans had their best race of the season at the right time Friday to win the team championship at the state meet at Kearney Country Club. That makes three consecutive state titles for East.

East finished with 65 points, and runner-up Fremont had 88. Southwest was fourth.

It was just two weeks ago when East finished third at the Heartland Athletic Conference meet behind Fremont and Southwest.

That’s part of why East had a bigger celebration than usual near the finish line when the coaches yelled down to the runners to let them know they’d won.

“It felt so special, since we kind of just came from under everyone and came back to the top,” said East sophomore Izzy Apel.

Despite not having as dominating of season as last year, East still had a lot talent and got some key runners back from injuries.

“We just persevered and worked as a team,” Apel said. “We love each other, so I feel like that’s how we’re able to do these type of things. We run as one.”

Apel led the Spartans in ninth place. Then came the key part with sophomore Kylie Muma, freshman Peyton Svehla and sophomore Berlyn Schutz finishing one after the other in 12th, 13th and 14th.

When senior Jenna Muma got across the line in 17th place, East had its five runners that account for the team score across and another team title. Due to injury, Jenna Muma, a three-time state medalist, hadn’t been in the varsity lineup until Friday. She earned her spot in the state lineup from a junior varsity meet last week.

East had all five of its runners for the team score finish before Fremont's third runner did.

“Those kids are competitors, and I don’t think you can ever count them out of anything,” Kabourek said.

It may have helped East that it didn’t have as much pressure to win this year.

“We had a disappointing conference meet,” Kabourek said. “Southwest and Fremont ran really well that day. On the way home I kept thinking, and then I spent the whole weekend looking at stuff. A big part of it is we got healthy at the right time. That’s huge part of it. But we weren’t running like an East team has in the last three years. I felt like we got separated too quickly, and we weren’t running as a team. So we sat down and had a heart to heart and talked about getting back to the basics.”

Miner also won the all-class gold medal. Miner just moved to Omaha this summer from New Jersey. Her family has ties to Wisner. She had ran track in middle school, but winning state may have been secondary to making some friends when summer conditioning began.

“I think it was really great for me to join the cross country team because of the difficulty of making friends with COVID,” Miner said. “That’s one of the main reasons I joined cross country at the beginning, was to make friends.”

It was another good year for Lincoln cross country, with six city runners in the top 15 in Class A.

She had a big smile when she crossed the finish line, which most people don’t have, not even the winners.

“I’m telling you, I was not expecting this today,” Seiler said.

Elkhorn North freshman Britt Prince finished fifth in Class B for the first state medal for the first-year program. Basketball is Prince's No. 1 sport, and she already has offers from Creighton and Nebraska.

Seward won a very close race for the team title. Seward had 55 points and runner-up Elkhorn 57. That’s Seward’s fourth state title in the past 12 years.

Photos: Going for gold and braving the cold at state cross country meet

Six years after showing up for his first day of school in Lincoln, Chot is now one of the best cross country runners in state history.

Lincoln East's Izzy Apel (25) and teammates Jenna Muma, Peyton Svehla and Berlyn Schutz celebrate their Class A girls team title as they take in cheers from the fans in the crowd at the state cross country meet Oct. 23 at Kearney Country Club.

The Class B girls leaders race through fall colors at the state cross country meet at Kearney Country Club on Oct. 23.