Live updates: State champions are crowned in Classes A and B 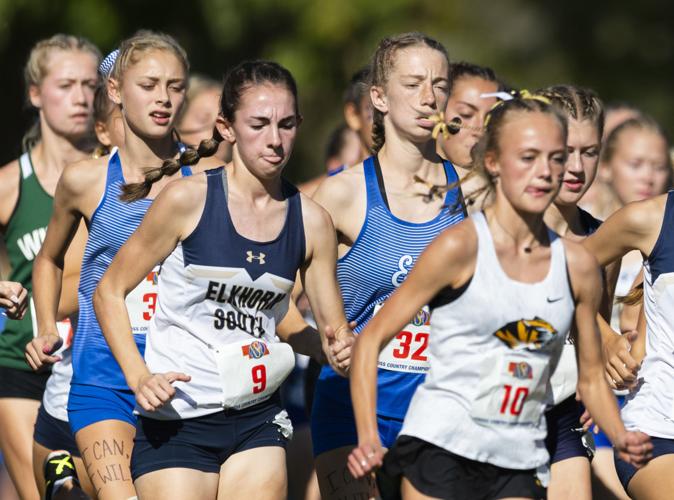 Lincoln East's Izzy Apel (32) leads her team near the starting line and into the pack during the Class A cross country state meet Friday at Kearney Country Club. 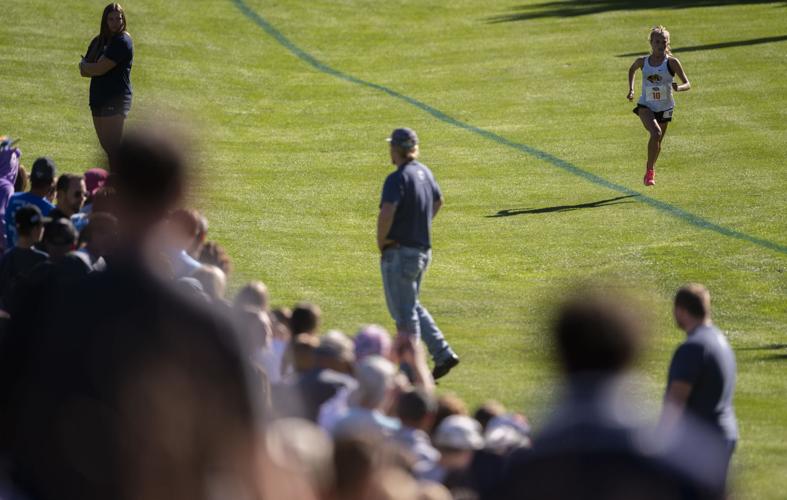 KEARNEY — Coaching high school cross country can be stressful, even when you’re Lincoln East coach Brian Kabourek, who has a great team.

No matter how good of a season you had before you got to the state meet, you still have to get five runners across the finish line to have a chance to win, and sometimes even really good runners try to do too much at state and struggle to finish.

On Friday, Kabourek watched as East's girls finished one after another in seventh, eighth and ninth. Twenty seconds later, the next two runners who would account for East's team score came across in 17th and 18th, and at that point East had clinched the Class A state championship.

What was Kabourek feeling after taking that moment in?

“It’s about 40% relief, and 60% exhilaration,” he said. “You always worry. I told the girls nothing is given, you got to go out and earn it. I was worried that some of the (four-peat) talk was impacting the kids, but they proved to me once again how tough they are because they put that out of their minds and found a way to finish.”

East finished with 54 points, and runner-up Fremont had 87 points. Fremont has finished second to East at state each time.

Just like last year, East didn’t have one of the top six finishers in the race, but won by staying together and "running as one."

East’s top three runners finished one after another, led by sophomore Peyton Svehla in seventh. Freshman Mia Murray was eighth, and junior Izzy Apel was ninth.

Then the Spartans needed to get two more across to finish off the win. That happened when freshman Ella Herzberg finished 17th and junior Berlyn Schutz was 18th.

The Spartans’ team score (54) was their second best during the four-year stretch.

East became just the third Class A girls team to win at least four consecutive state titles (also Lincoln Southeast and Omaha Marian), and this streak hasn't been driven by just a few great runners but a strong overall program. During the streak, 16 different runners have been on East’s state winning teams.

Some of East’s runners didn’t have their best races of the season Friday. Murray had been the Spartans’ top runner in every race, but was laboring near the finish.

Svehla is usually No. 3 for East, but went ahead of Murray at the finish.

“I had no idea our top runner was struggling until the last 400 (meters),” Svehla said. “I passed her, and I gave her a little word of encouragement.”

Svehla having a strong race, and all five scoring runners getting across in the top 20, describes the team well, Svehla said.

“We’re so deep that no matter what happens, if one runner isn’t running their best race, or something happens, it almost strengths us in a way and gives us something to fight for,” Svehla said.

Fremont senior Elli Dahl was the Class A champion in a 17 minutes, 58 seconds, faster than any girl has ever run at the state meet for all classes. In the nine years since girls in the state have run the 5,000-meter distance, no runner had previously run sub-18 minutes.

Dahl also won the all-class gold medal as a sophomore.

“(The state record) means I’m leaving a legacy for other Nebraska girls, and I’m pushing girls who I may not know, but I want them to get better also,” Dahl said.

Dahl took the lead at about the 2-mile mark and broke free convincingly for a 29-second win.

In Class B girls, Norris won its first team state championship in the sport.

It was an impressive showing, with the Titans winning with a 2-5-10-11 finish. The Titans' team score of 24 was one of the best ever in Class B.

The Class B winner was Gering junior Madison Seiler in a repeat title. She had ankle surgery on July 7, didn’t run until Sept. 8, but still won.

In Class C, Keelianne Green from Arlington won to complete an undefeated season in her first year in the sport after two years of softball in the fall.

The team race was extremely close. Crofton won with 46 points — just ahead of Nebraska Christian (48 points) and Ainsworth (52 points).

The Elkhorn South senior who had an undefeated cross country season chose from a long list of some of the country's top running programs.

Many of the best girls cross country runners in Nebraska this season came from Lincoln schools.

At the state meet in October, Dahl became the first girls runner in state history to finish the 5-kilometer race in under 18 minutes.

Lincoln East's Izzy Apel (32) leads her team near the starting line and into the pack during the Class A cross country state meet Friday at Kearney Country Club.