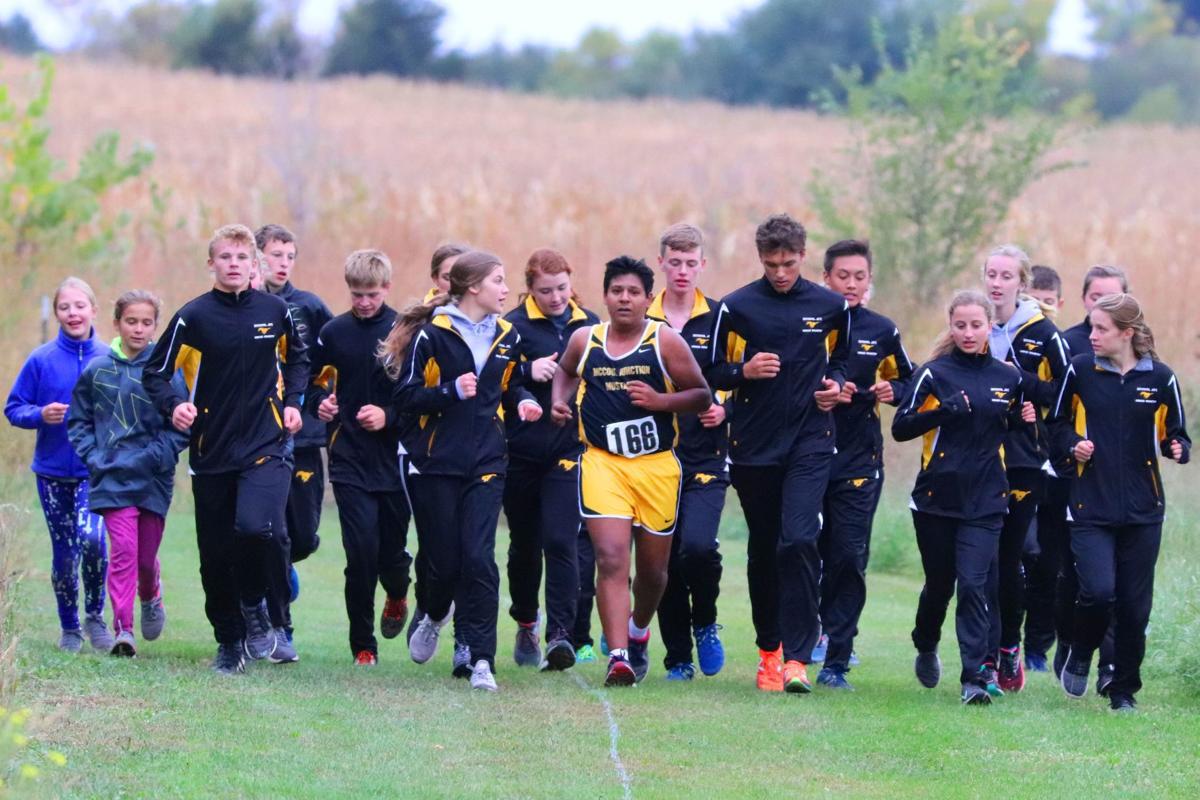 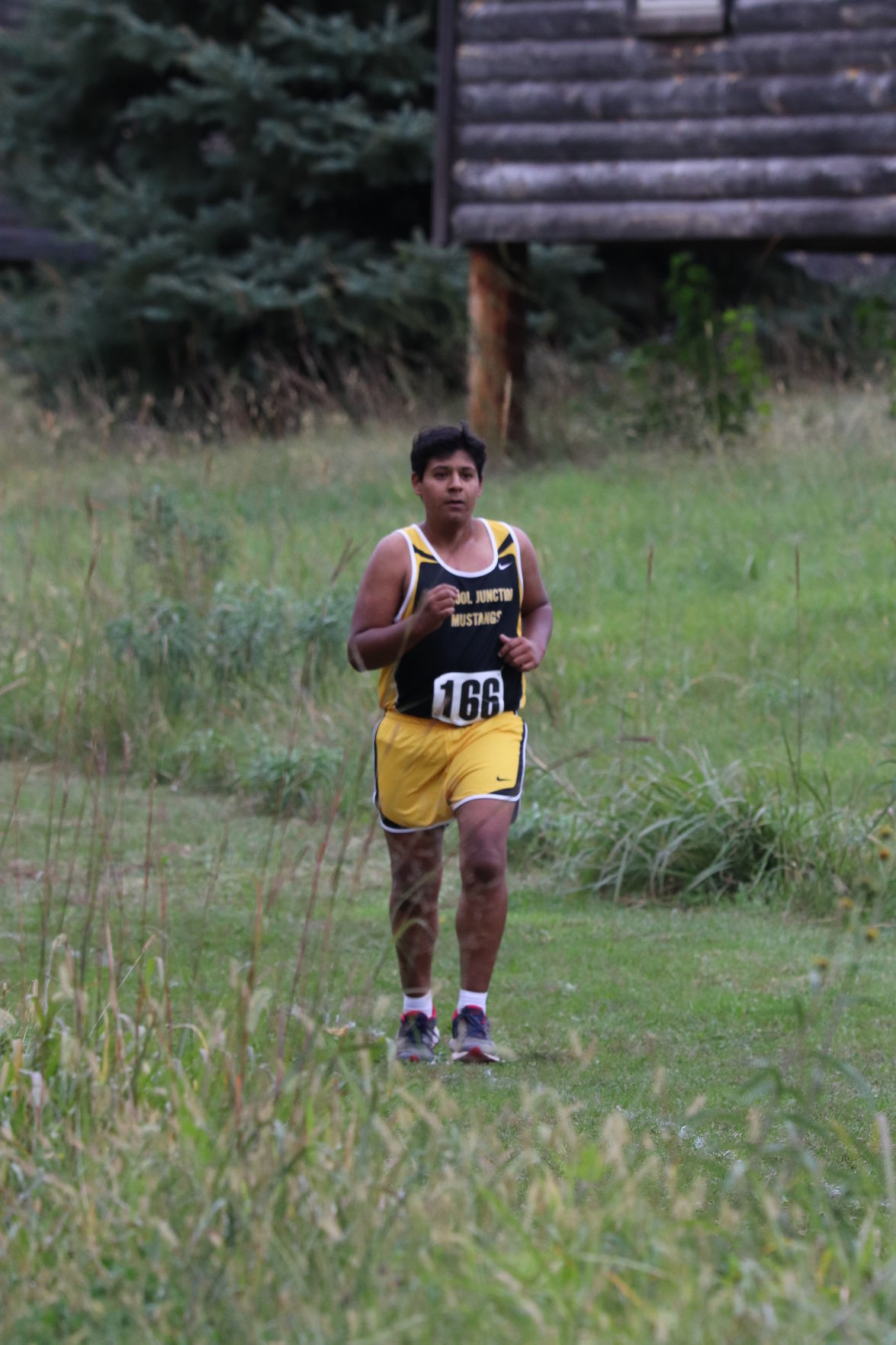 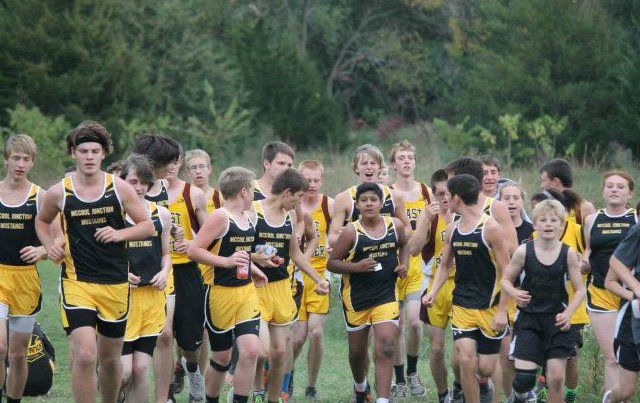 In 2015, after hearing the story about how then-McCool Junction freshman Noah Lambrecht (center) was running cross country despite numerous health challenges, runners from the East Butler team went back out on the course after they finished the race to cheer for Lambrecht.

The first time that it happened, Noah Lambrecht didn’t know what was going on.

Lambrecht was running in a meet with the McCool Junction cross country team. He was doing the grueling endurance sport even though he had been born with a life-threatening heart defect and had only 1½ good lungs, in a sport where athletes with two good lungs are still gasping for air.

As his freshman season went on, people began to hear the story of the boy running in last place. They were impressed with what he was doing, and how he kept running even after most of the runners had finished the race.

And then during a meet near the end of his freshman year, some runners from East Butler High School, still exhausted after racing 3.1 miles, headed back out on the course to support Lambrecht.

“I thought they were doing a cool-down run, but when they met me they all turned around and said, ‘We’re going to finish this together,’” Lambrecht said.

Then after all the McCool Junction runners had finished that day, they also joined up with Lambrecht and the East Butler runners.

“From there it kind of took off,” he said.

The same thing kept happening the next three years, with teammates and runners from other schools joining him for the last part of his race. During his senior year at a meet in Hebron, some football players from Thayer Central watching that day even joined in. There were about 90 people running with him that day. The runners would go with Lambrecht until he was near the finish. Then they’d stop, and watch Lambrecht run to the finish.

The first time other runners came back join up with Lambrecht, he was confused. When he found out what they were doing, he was shocked. And, eventually, he felt an overwhelming feeling of being cared for.

“These guys are the winners, and the ones getting medals and trophies and they’re wanting to come back and finish the run with me, after they just finished,” he said. “It made me feel cared for, and part of a whole sports family, rather than just a team family as well.”

Lambrecht graduated from McCool Junction in 2019. Now he’s a college freshman at Wayne State, studying communications and playing snare drum in the marching band. He’d like to get into law enforcement, and also be a motivational speaker.

Lambrecht was back in the news last week after he earned a national award. He was selected the 2020 national recipient of the National High School Spirit of Sport Award, given by the National Federation of State High School Associations. The award was created to recognize those individuals who exemplify the ideals of the spirit of sport.

In 2019 Lambrecht also got to attend the State of the Union as the guest of Sen. Ben Sasse — a fellow runner -- and toured the U.S. Capitol and the White House.

Lambrecht feels blessed that he was able to compete, and be an inspiration to others. Life was a challenge for him from the start.

When he was born in Chicago he needed heart surgery in the first days of his life. He’s had four heart surgeries, and has a pacemaker. His parents weren’t going to be able to care for him, and put him up for adoption soon after he was born. Sheri and Gaylor Lambrecht adopted him and took him home to Gothenburg. They moved to McCool Junction when he was in the first grade.

That the Lambrechts adopted him also makes him feel cared for.

“It makes me feel loved,” he said. “It makes me really happy that someone was willing to take care of me, because without them I wouldn’t be alive.”

Because of his pacemaker it was too dangerous to play football, so in eighth grade Lambrecht tried cross country.

He couldn’t run as fast as most people. It sometimes took him 40 minutes to finish the race. At one of the large meets he finished 25 minutes after the first-place runner. But he finished every time, and improved his time by about five minutes over four years.

“It was tough, especially because of my respiratory issues,” Lambrecht said. “My left lung is actually smaller than my right lung. So breathing sometimes was a little difficult.”

Lambrecht says he always finished because he didn’t want to let his teammates down. And he says his coach, Ryan Underwood, deserves a lot of credit for helping him.

For Lambrecht, what is the best part of his story?

“Probably just the fact that I wouldn’t give up, when I had every single reason to,” he said. “And I think that’s what’s catching people’s eyes when they read my story, is the fact that I had all of the reasons in the book to quit, but I wouldn’t.”

KEARNEY — In the sport of cross country, this was the equivalent of a basketball buzzer-beater.

Many of the best boys and girls cross country runners in Nebraska this season came from Lincoln schools.

Run this way: How one Lincoln East runner found her way to cross country

In 2015, after hearing the story about how then-McCool Junction freshman Noah Lambrecht (center) was running cross country despite numerous health challenges, runners from the East Butler team went back out on the course after they finished the race to cheer for Lambrecht.