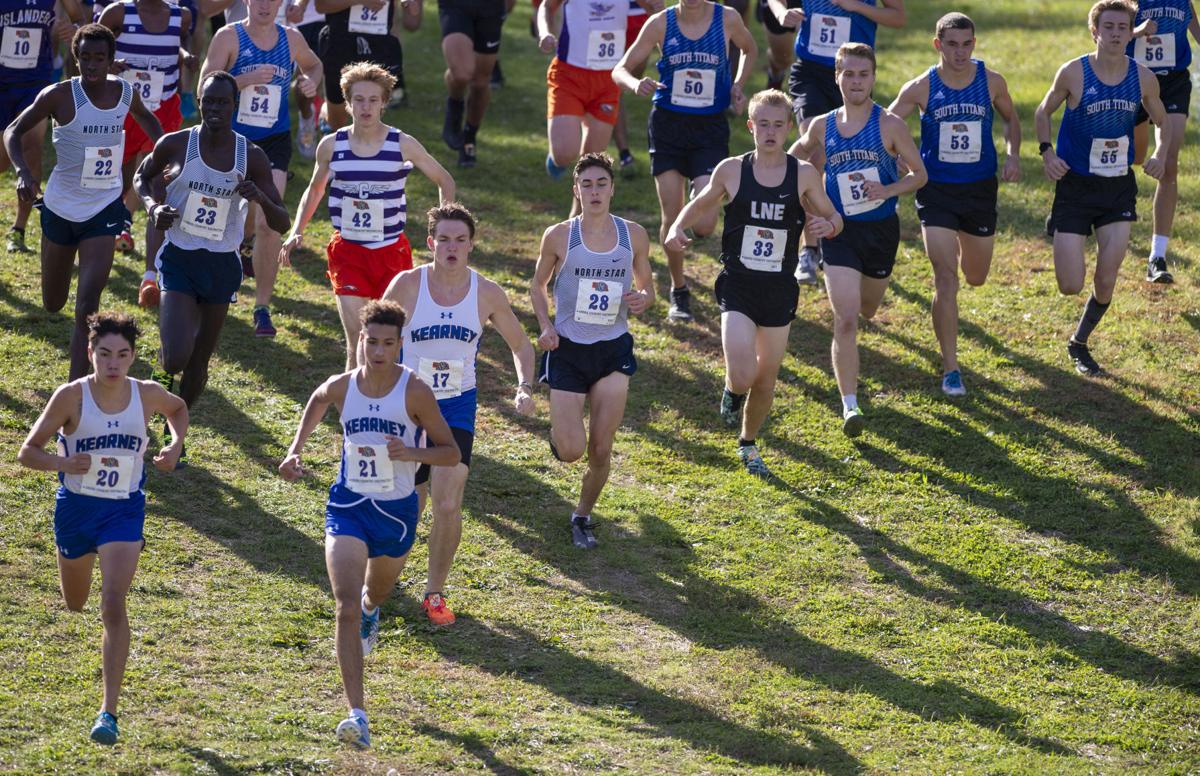 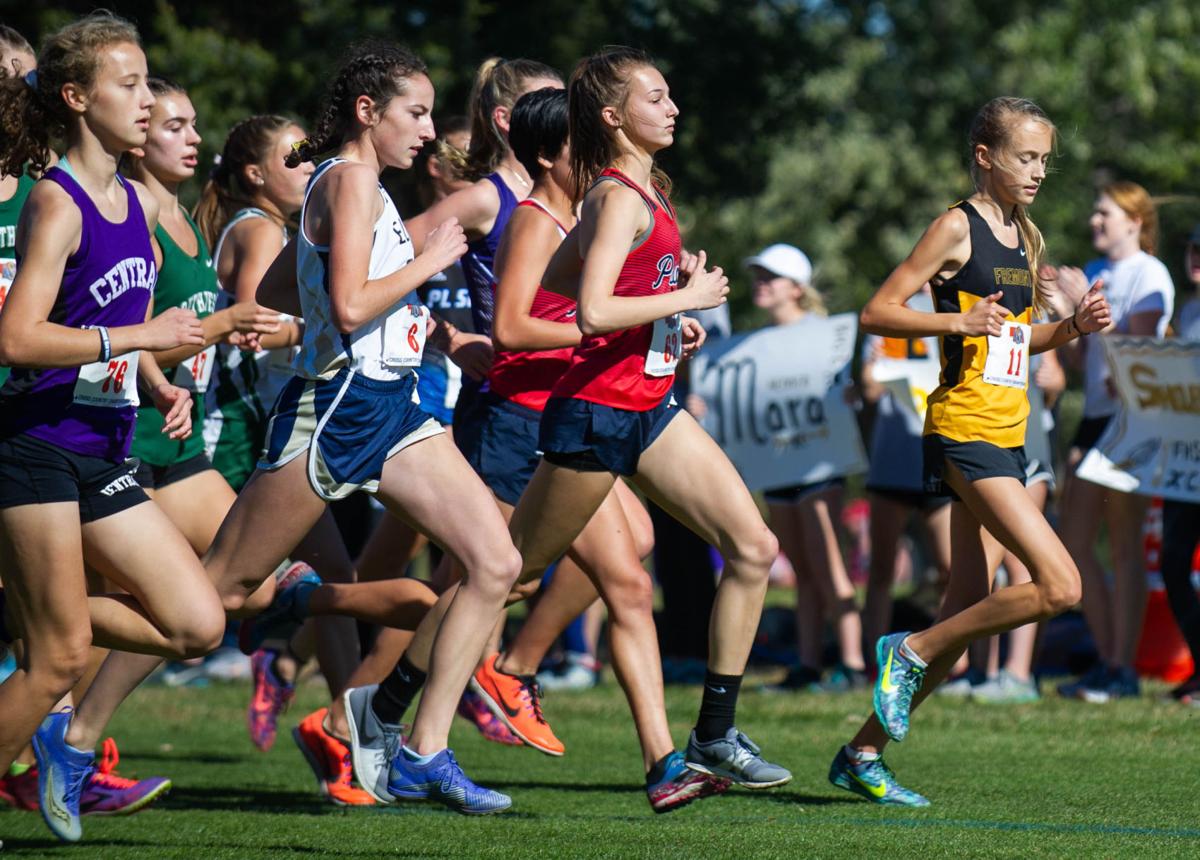 Fremont's Mara Hemmer (11) takes an early lead at the start of the 2018 Class A girls race during the state cross country meet at the Kearney Country Club.

You can add high school cross country to the long list of things that will be different this year, as the teams try to compete during a pandemic.

Just one example: Last year the Lincoln Southwest girls team entered about 60 runners in a junior varsity race at one meet in Lincoln.

This year that’s a no-no, especially if there are several teams at the meet. Now they’ll be smaller races that don’t have that many runners combined for all of the teams in the race. That will help with social distancing and limit the number of spectators at each meet.

The cross country season is scheduled to go on this fall in Nebraska, with the first meets scheduled for later this week.

But making sure the sport does not contribute to the spread of the COVID-19 virus and the athletes stay healthy has caused coaches and administrators to make changes to how they operate.

Now when Lincoln Southwest coach Ryan Salem plans the training schedule for the week, the No. 1 question is if that’s the safest way to do a workout.

“The community is trusting us with their children, so fast or slow, or win or lose, we have to prioritize safety,” Salem said.

Southwest has historically had one of the largest teams in the state, and last year had 168 out for the sport. That number naturally dropped to 120 this year, with some students deciding not to come out due to concerns.

But even that’s too large of a group to be together, so the team is split into three groups: 48 boys, 48 girls and a combined remote team of boys and girls. That’s a group of junior varsity runners that does most of its workouts alone. They meet online to get suggested workouts and for support, and occasionally meet in-person for workouts when coaches and a space are available.

“We need to keep our team small because the district has given us very clear guidance about what’s safe,” Salem said. “And so for the first time in 20 years our boys and girls team don’t meet in the same location. They don’t run the same route, just so they don’t breath on each other.”

At Southwest the runners wear masks when they’re inside the school stretching or doing drills, but they can take the masks off when they’re running outside.

Many of the Class A coaches have been open to making changes to their normal race schedules with hopes that the season will be able to continue safely all the way through the state meet.

Numerous large meets in Class A have been canceled, including early season meets such as Millard South, Papillion-La Vista South and Lincoln Pius X.

Southwest has had at least three of its regular meets canceled.

“I know the athletic directors have been burning the midnight oil trying to wipe the schedule clean, and then build some new stuff that’s safe,” Salem said.

In the place of the canceled meets, schools are trying to schedule smaller meets. For Southwest that could mean a dual against Lincoln Southeast, which hasn’t happened in the 19 years the school has been open.

“In the history of cross country the dual format has been a huge part of our sport,” Salem said. “It’s only really the past 15 years where you see these gigantic invites. Running head-to-head is about as pure as it gets. So I’m excited. I remember as a Lincoln Southeast student years ago running duals. I remember dual track meets.”

Changes are likely coming for some of the larger meets of the year. The Harold Scott Invite hosted by Lincoln High had 16 schools and 989 finishers last year (477 junior varsity boys, 300 JV girls, 109 varsity boys and 103 varsity girls).

Lincoln High athletic director Pat Gatzemeyer said the meet is still scheduled for Sept. 17, and they are currently planning for what changes will need to be made to the meet.

Another one of the biggest meets of the year is the Nebraska-Kearney Invitational, which gives teams a chance to race on the state meet course at Kearney Country Club before the state meet. Meet director Brady Bonsall said the meet is still scheduled for Sept. 28, and he’ll be announcing changes for the meet to coaches soon. The changes are likely to include roster limits and more time between races to reduce the number of runners and spectators on site at the same time.

During races, the start and finish areas are the biggest concerns.

At the nine-team Norris Invitational on Saturday teams will have unlimited entries. The timing system used for the meet will allow for several waves of start times, with a new group starting the race every two minutes. That will cut down on both the number of runners in the starting box at one time and large packs of runners in the early part of the 3.1-mile race.

Guidelines range from extending the sideline box for football players to the 10-yard lines to no switching of benches between volleyball sets.

When it comes to COVID-19 and the current status of Nebraska high school fall sports, no news is good news.

'All of a sudden you’re going to become the only show in town': Prep football keeps going after Huskers benched

With the Huskers sidelined, there's never been a better time to take in the "purest form of entertainment" that is the high school football season.

KEARNEY — The Lincoln Southwest boys were the No. 1-ranked team in Class A cross country almost the entire year, a team loaded with talent wit…

KEARNEY — In the sport of cross country, this was the equivalent of a basketball buzzer-beater.

For the Lincoln East girls cross country team, the first 3,000 meters of a race is a team game; but after that, it’s a race.

Recapping the first night of an unprecedented high school football season through photos and video.

'We want to get to Oct. 23': Cross country coaches working overtime in hopes that season can reach finish line

The two-time defending champion Spartans have enough talent to make it a three-peat. They're just hoping they have the opportunity.

Zach Pittman's plan was to keep pace with the lead group, and make his move with about 800 meters left. That's about what happened.

Duals were more common in the 1980s — and Saturday marked the first team vs. team competition for either program in at least 20 years.

The Harold Scott Invitational is one of the largest regular-season meets of the year, but it will be different this time due to COVID-19.

Bri Rinn won the afternoon session at the Harold Scott Invitational, which was contested in two sessions this year due to COVID-19 restrictions.

Fremont's Mara Hemmer (11) takes an early lead at the start of the 2018 Class A girls race during the state cross country meet at the Kearney Country Club.