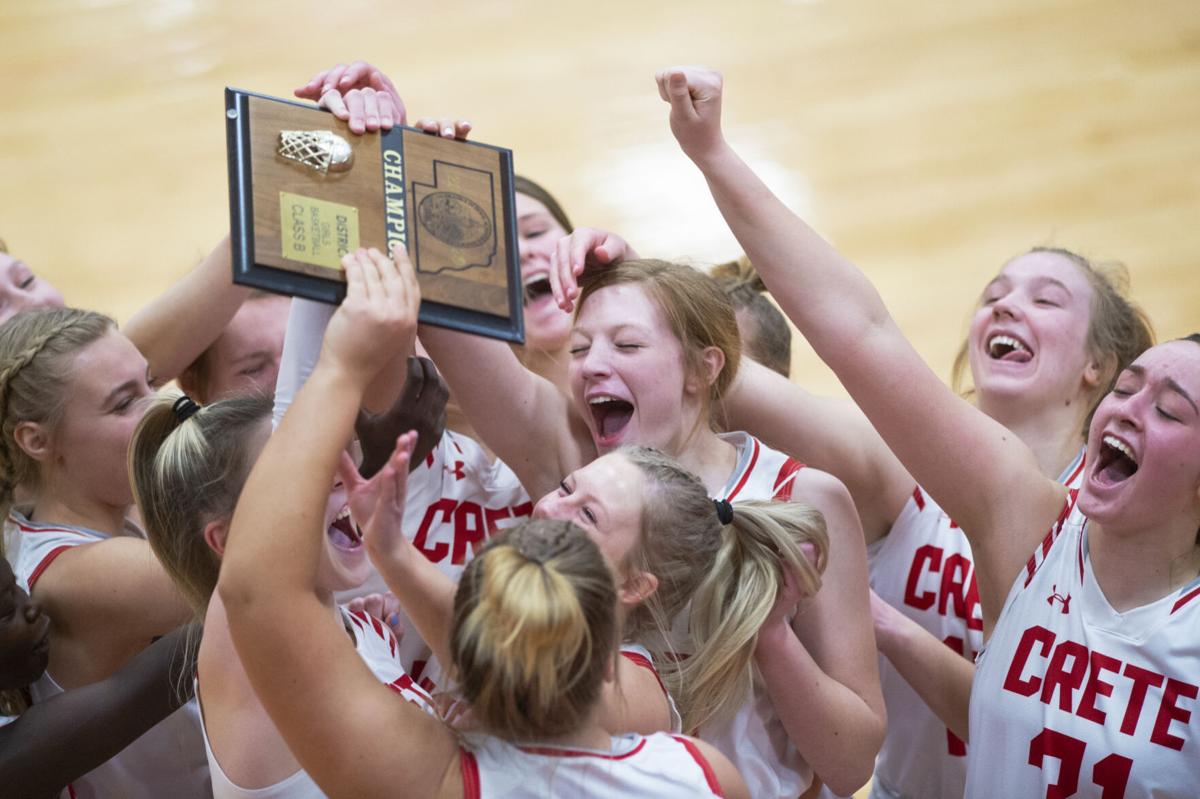 The Crete girls basketball team celebrates after defeating Waverly 40-31 in the B-3 district final Saturday in Crete. 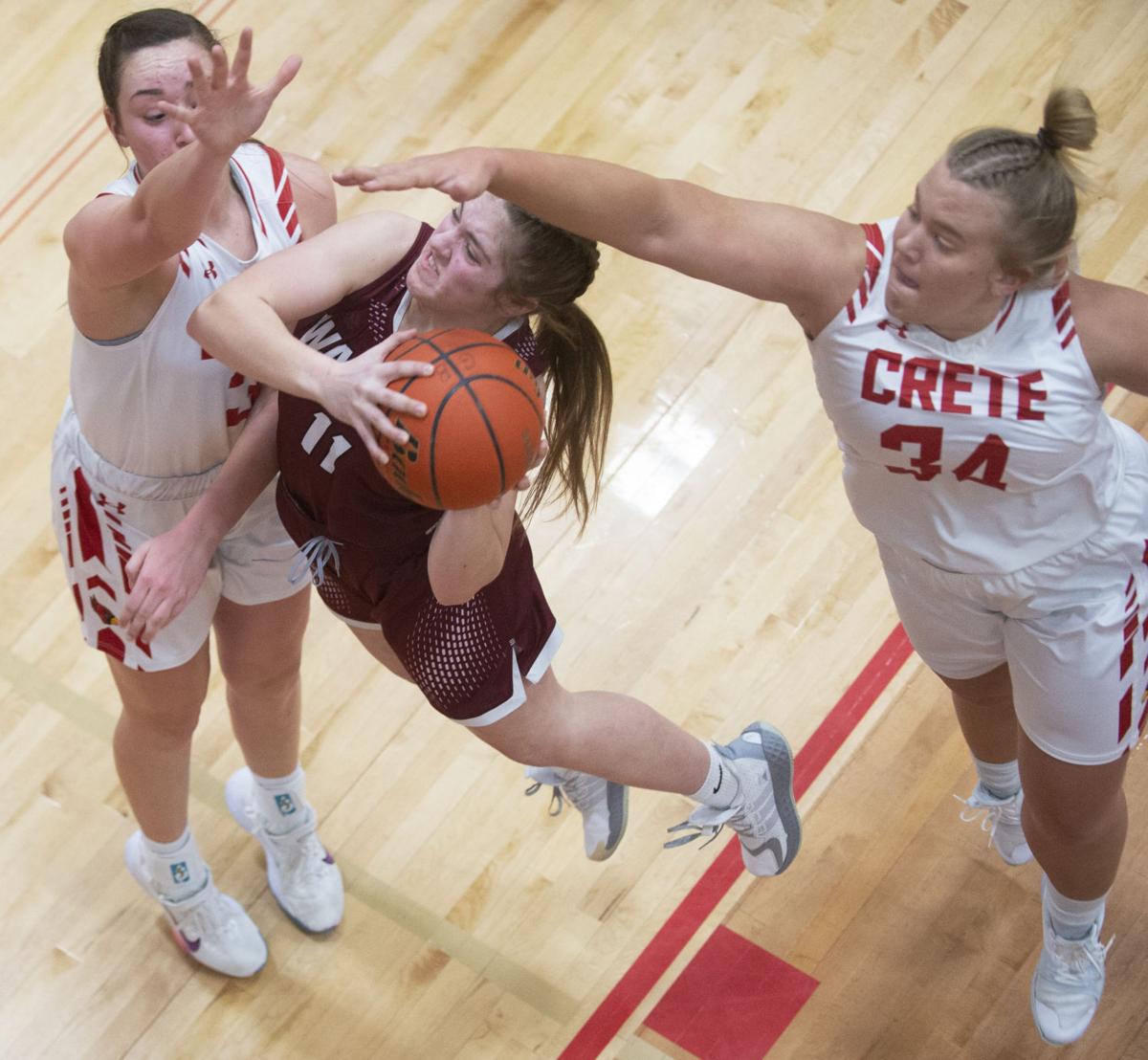 Waverly's Emelia Rourke (center) is fouled by Crete's Marin Rasgorshek (left) while being guarded by Lexi Mach (right) in the first quarter during the B-3 district final Saturday in Crete.

CRETE — Crete girls basketball head coach John Larsen may not have been in the gym Saturday, but he still found a way to coach his team to victory.

Blood clots relegated Larsen to watching via livestream from his hospital bed, where he saw the Class B No. 3 Cardinals play a stagnant first half of basketball. A simple text message to his group reminded them to move around on offense, and Crete soon put his words into action.

Senior Hannah Newton led the charge by scoring 13 of her game-high 20 points in the second half as Crete defeated Waverly 40-31 in the B-3 district final.

Winning district title had a holiday feel to it for the Bennington girls, who outlast Beatrice in B-7 final

“We wanted this game for Larsen,” Newton said. “We didn’t have our head coach today and we didn’t want to go out without him.”

Crete (21-3) did a lot of passing the ball around the perimeter as it tried to solve Waverly’s (9-14) 2-3 zone in the first half. The Vikings led for stretches of the first half thanks to a pair of three-pointers from junior Emelia Rourke, who led the Vikings with 11 points, but Crete still took a 19-16 lead into halftime.

Although Crete extended its lead to seven points early in the third quarter, Waverly’s three-point shooting kept the score at 25-22 heading into the fourth quarter. The Vikings made 6 of 9 three-pointers as part of a 9-for-44 (20.4%) shooting performance overall.

With the Cardinals’ season on the line, it was time for their senior leader to step up. Newton scored a quick bucket with a well-timed drive into the lane, followed by a steal and layup. She then drained a pivotal three-pointer that gave Crete a 35-22 lead.

“That’s what you expect from your senior leadership,” Crete assistant coach Paul Smith said. “She’s done it for the three years we’ve been here and she’s one of the best in the state. When the game’s on the line, I want the ball in her hands.”

A final layup from Newton finished Crete’s 13-0 start to the fourth quarter and gave her a stat line of 20 points, five steals and five rebounds — and a win. Brooke Deisley, a junior, was the Cardinals’ next leading scorer with five points as Crete shot 13-for-44 (29.5%) from the field.

Now, the defending Class B state champions will return to the state tournament for the third straight year. Despite graduating Super-State guard Morgan Maly, the Cardinals came back just as strong in 2021.

It all goes back to a meeting Larsen and Smith held with their team last spring, and the work the Cardinals have put in ever since.

“We told them nobody’s expecting us to be there at all,” Smith said. “Coach Larsen and I told them we go to state, and that’s the expectation.”

Sharpened by playing in the ultra-competitive EMC, Waverly girls look to make most of next chance

All six teams from the Eastern Midlands Conference are playing for district championships Saturday.

Will Crete return to PBA to defend its title? Could No. 2 Norris be tested? How about No. 1 Elkhorn North? Break down all of the games with us.

District final matchups are set for the lower five classes in girls basketball.

The green light to Lincoln: Norris regains its shooting confidence in capturing B-1 crown

The No. 2 Titans showed just how dangerous they can be when the shots are falling in the B-1 district final Saturday.

Watching film with Jillian Aschoff: From no-looks to scoop passes, why the LPX senior shines as a passer

Clark Grell rolls the tape with one of the state's most elite passers. What does Jillian Aschoff see before making a clever pass?

The Crete girls basketball team celebrates after defeating Waverly 40-31 in the B-3 district final Saturday in Crete.

Waverly's Emelia Rourke (center) is fouled by Crete's Marin Rasgorshek (left) while being guarded by Lexi Mach (right) in the first quarter during the B-3 district final Saturday in Crete.