Watching film with Jillian Aschoff: From no-looks to scoop passes, why the LPX senior shines as a passer
View Comments
Share this
{{featured_button_text}}
1 of 2 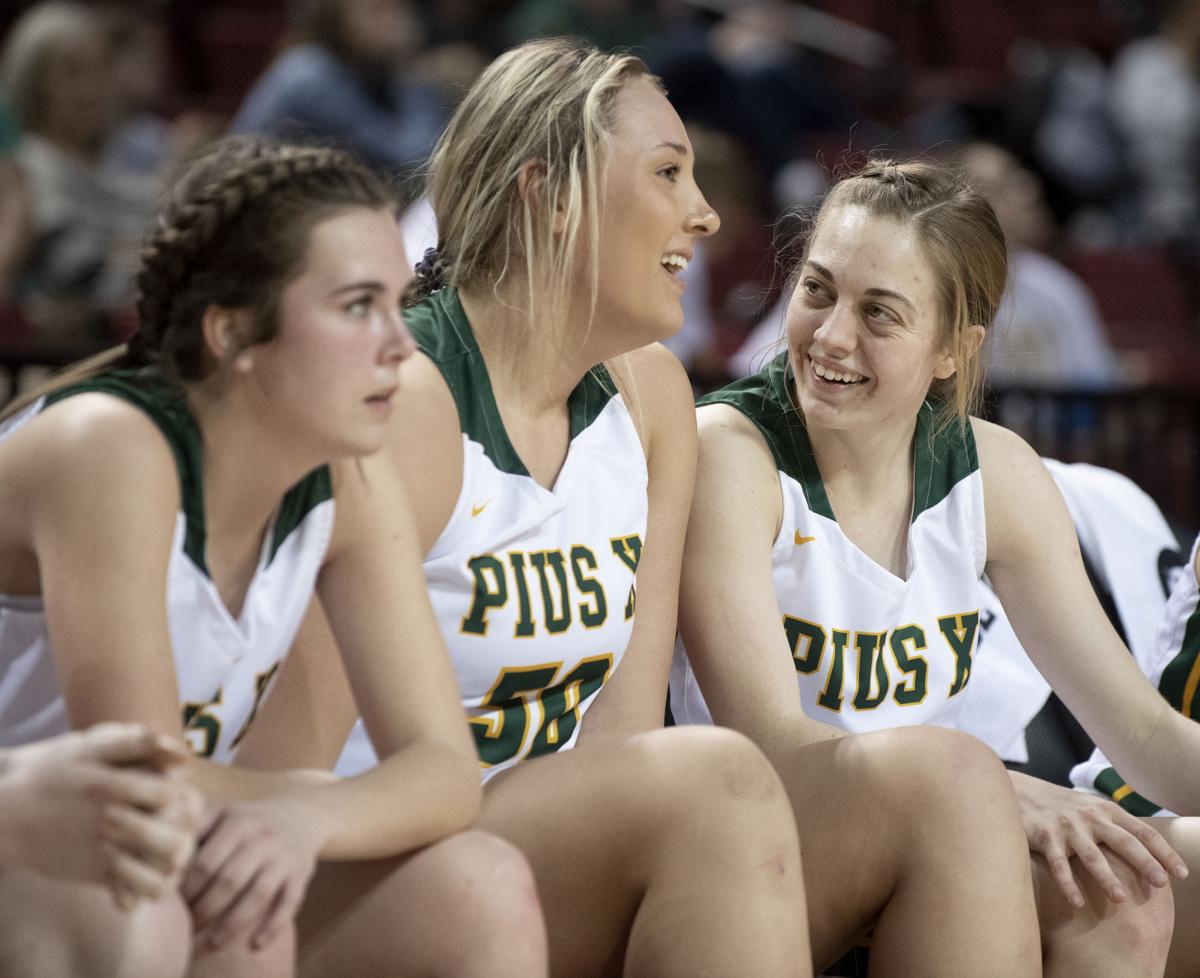 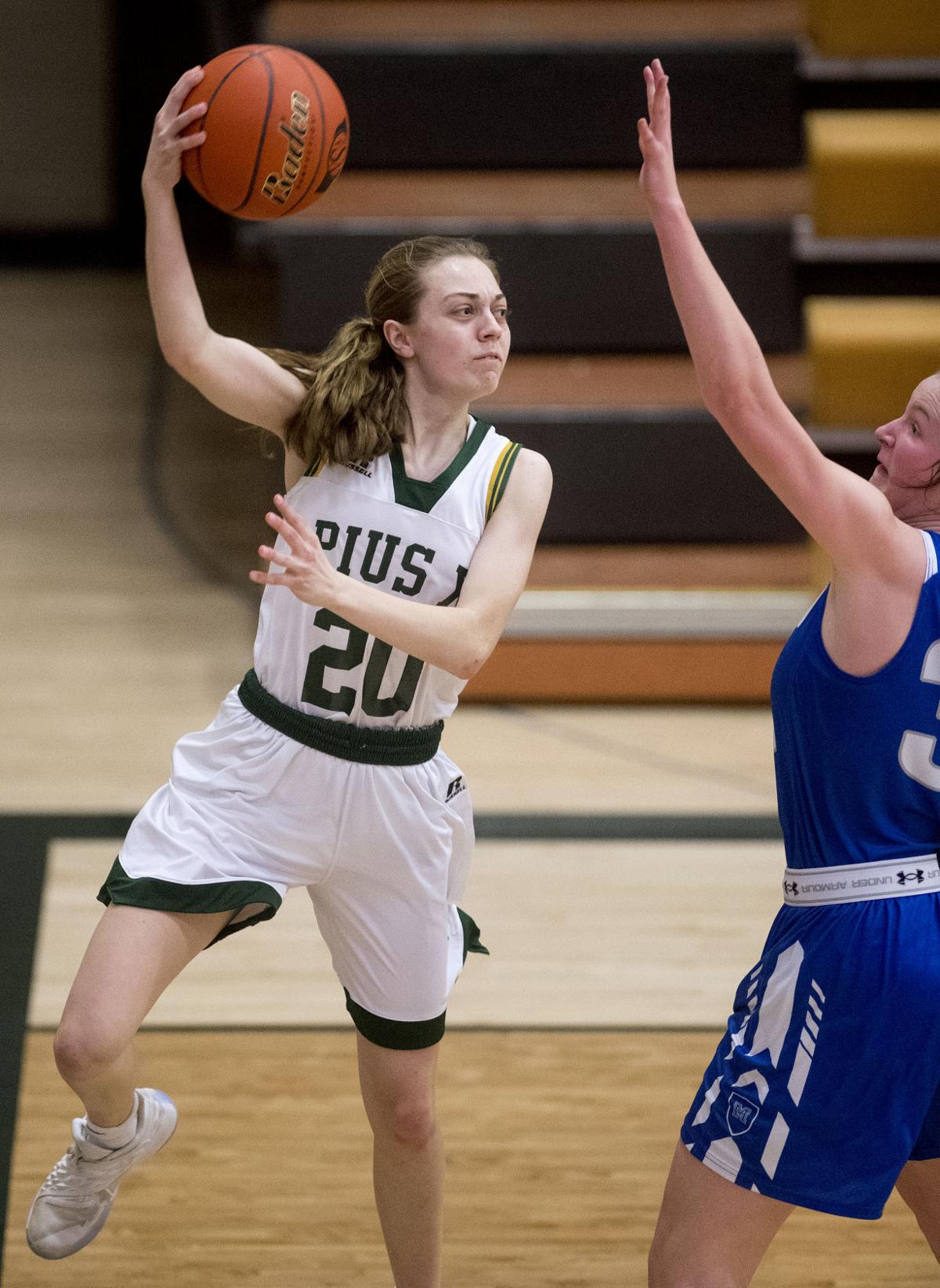 Lincoln Pius X’s Jill Aschoff (20) passes to a teammate as Omaha Marian’s Parker Stafford (30) defends in the first half on Friday during the A-1 district final at Bishop Flavin Gym in 2019.

The behind-the-back pass is her favorite. The long one-handed home-run balls are up there, too.

But Jillian Aschoff has plenty more in her passing arsenal. The no-looks. The scoop passes. The lasers from the wing. The occasional two-handed flip behind the head.

If you're on the basketball floor with the Lincoln Pius X senior point guard, you better be on your toes — as a teammate and as an opponent — as a pass is likely coming at any moment.

"When you have a kid like Jillian, you've got to kind of take the reins off of her and just let her go," Pius X coach Ryan Psota said. "Typically teams are going to want the ball to go from Point A to Point B to Point C. With her, you just kind of watch and she normally will make the right play or she'll make an unbelievable play that most kids can't make."

There are many great point guards in the state and Aschoff is near the top. But what separates Aschoff from most is her court vision and IQ, her ability to push the ball in transition and run the offense in the half-court set. And of course, her passing wizardry.

Most kids want to score with the basketball. Aschoff was made to pass.

"I was always pretty small, and right from the beginning I just thought passing was my thing," said Aschoff, who is averaging a career-best 6.5 assists per game this year. "I never scored more than two or four points when I was younger."

Aschoff's passing prowess began at a young age in the family garage with her father.

"Before we shot or did any offensive stuff, we would just pass," said Aschoff, a third-team Super-Stater last year. "We just played catch forever. I think that was a big thing, making 10 accurate chest passes, making 10 accurate one-handed bounce passes.

Her skills began to take more shape at Small Fry games at the Salvation Army where she worked with Carey Dart and played with some of the city's best players.

By her sophomore season, Aschoff was starting for the Thunderbolts, helping them to the Class A state semifinals. Her talent was evident, but with the wow-factor passes came the turnovers.

Aschoff continued to work on that, and now she's working with a 3-to-1, 4-to-1 assist-to-turnover ratio. Her offensive game also improved (8.1 points per game this year).

Pius X (20-0) will begin postseason play Tuesday on its home floor. The Thunderbolts haven't missed a beat. Husker recruit Alexis Markowski is having a dominant season in the post, and the offense overall has been in sync.

Psota credits Aschoff's ability to run the offense and make good decisions. The Bolts are shooting nearly 50% from the field as a team.

"She knows where the ball needs to go in certain situations," he said.

Aschoff passed Katie Montgomery, a two-time Super-Stater and a two-time all-conference player at New Mexico, for the record.

"For her to pass Katie's record in three years when Katie did it in four is pretty incredible," Psota said.

And like a good passer, Aschoff was quick to pass much of the credit to her team.

"Lex is well over half of those, and then Miriam (Miller)," she said. "Just knowing when the ball's coming and finishing the play is the biggest part, so I've always had such good teammates around me. None of those would be assists if the other person doesn't finish the play."

Inside the passes with Jillian Aschoff

The Pius X senior point guard helps break down what she sees on the court:

Aschoff also is a good defender, averaging 2.6 steals per contest. Here she gets a steal in Pius X's 1-2-2 full-court press against Lincoln Northeast and then throws a no-look behind-the-head pass to an open Adison Markowski.

"Once I know that Adison's there once I get the steal, I don't really know, just throw it over my head," Aschoff said. "That one is mainly on steals, I'd say. You just have to look back for a second and chuck it."

"I think it's something we stress a lot during the games is run your lanes," Aschoff adds about Adison Markowski's read.

Added Psota about the pass, "She did it again later in the game."

Defenses are in a tight spot when the Thunderbolts get in transition and the 6-foot-3 Alexis Markowski has created a mismatch against a smaller defender. Many times this year, teams have stayed committed to Markowski on such plays, which leads to an easy two for Aschoff. Against Norfolk, Aschoff drew the defender and hit Markowski with a no-look pass.

"A lot of teams will just sit on Lex in that situation and not even guard me for the layup," Aschoff said. "But it looked like Norfolk was going to bring that girl in so Lex is wide open. Lex is talking to me usually in that situation. If that defender is completely on Lex, I just go get the points."

Aschoff says it took some time to accurately throw the long 35-, 45-, 55-foot one-handed passes. Sometimes they'd sail out of bounds and hit the wall. She had it down in last year's state semifinal win against Millard South.

"They're going to sell out with all their pressure and I know that over the top is a good option," Aschoff said.

Aschoff's ability to fire long passes gives the Thunderbolts another option when breaking full-court presses designed to create turnovers before teams can get the ball across half court.

Aschoff isn't afraid to throw passes from 40 or 60 feet away to Alexis Markowski. She's also very good at placing the ball in spots where only Markowski can go get it and score. Three North Platte defenders are crowding Markowski in a Class A state tournament game from last year, and yet Aschoff sees a place to put the ball from the half-court logo.

"Early in the game, that's usually when I throw those longer over-the-top of the defense passes because usually they aren't adjusted to that yet," Aschoff said. "Lex usually puts her hand up and once I see her put her hand up, she's ready for the ball. Just get it over the top and throw it as far as I can, almost like I'm shooting it up high."

Right on the money pass

Against Fremont in the 2019 HAC Tournament championship game, Aschoff showed her court vision and pin-point accuracy in transition.

"Last year I was always looking to see if Lauren (Taubenheim) was running down the court, because when she'd see Alexis get the rebound, she'd break down the court right away," Aschoff said. "My first look was usually Lauren. It's going to be a one-handed baseball pass to Lauren. Usually get it higher than lower because Lauren can pretty much catch anything."

The steal and no-look in the final

Aschoff had a great state tournament in 2020, helping lead the Thunderbolts to a state title win against Lincoln East. Aschoff scored on a transition layup on an earlier possession before finding Charlee Hagedorn the next time.

"I know she's (the East defender) probably going to come up to me," Aschoff said. "It's me and Charlee ... and I feel like this one I knew the right read was to pass. I knew I was going behind the back right away. Once I see it's two on one, I try to go behind the back, because it's the easiest pass to make for me (there). If I throw it early she's going to deflect it, but that's the best option (on that play)."

Pius X breaks out of a trap against Millard South in the Class A state semifinals, and Aschoff immediately pushes the ball up the court. She has two options, Markowski on the block against one-on-one coverage, or Taubenheim is open on the left side.

"I needed to get her (Millard South defender) to come at me, so I had to take a couple extra dribbles (right)," Aschoff said. "A lot of times I just throw that to Lauren, but there's two people so I made Megan Belt come up to me and they don't leave Lex much.

"If I bring her (the defender) out this way, I'm not going to try to come across my body and throw it over the top because she can probably swat that."

Instead, Aschoff goes with an underneath scoop pass and Taubenheim scores with her left hand.

'We wanted this game for Larsen': A halftime reminder from its absent coach sparks Crete to district title

Dealing with blood clots, John Larsen couldn't be in the gym to coach the Cardinals. He still made his presence felt from a hospital bed.

The green light to Lincoln: Norris regains its shooting confidence in capturing B-1 crown

The No. 2 Titans showed just how dangerous they can be when the shots are falling in the B-1 district final Saturday.

Rounding up the highlights from district girls basketball action Tuesday, including the Gators notching their second-ever district win.

Primed for Lincoln: Breaking down the seven Class A girls district finals

Here are some quick looks at all seven Class A district finals.

No matter what's thrown at them, Cross County girls have remained steadfast during another 20-win season

The Cougars had to improvise in the closing moments of a subdistrict final last week. No worries. No panic. That's the theme this season.

Lincoln Pius X’s Jill Aschoff (20) passes to a teammate as Omaha Marian’s Parker Stafford (30) defends in the first half on Friday during the A-1 district final at Bishop Flavin Gym in 2019.