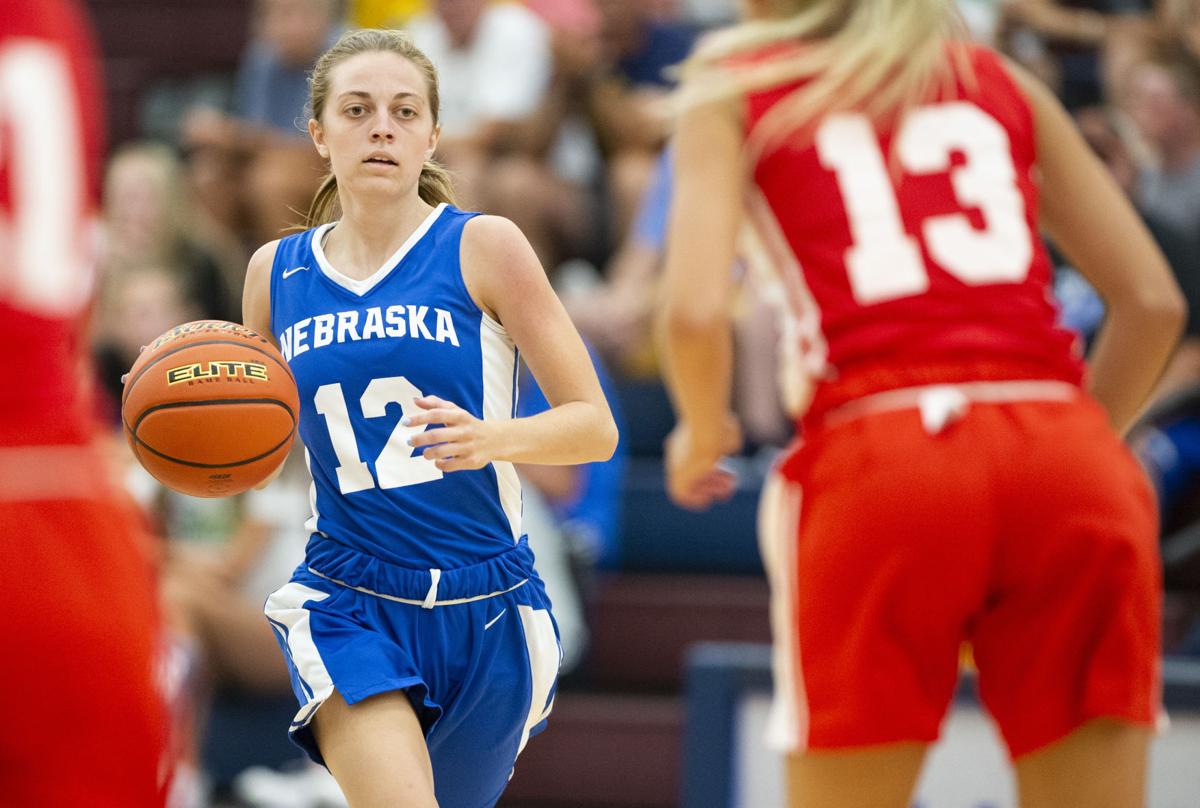 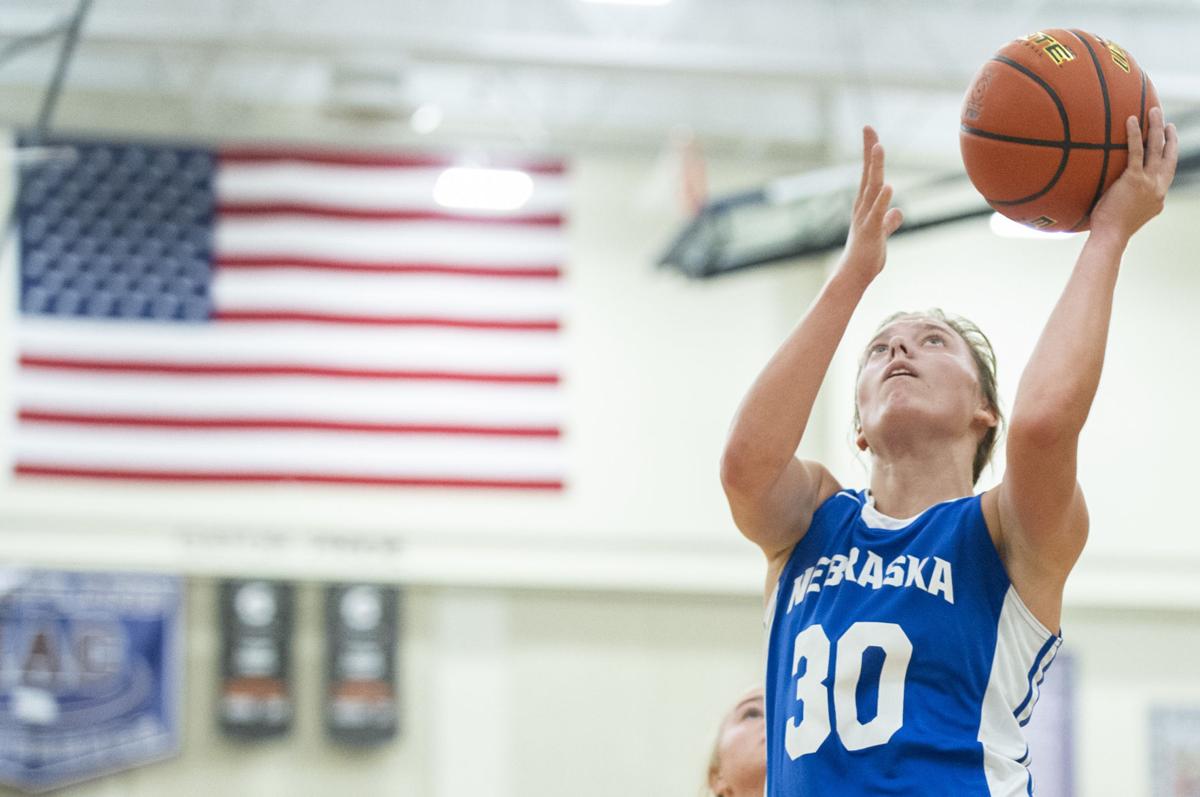 The Nebraska Coaches Association supplies red and blue uniforms for its high school all-star games, so it can take about a quarter or two to make out who's who.

Mak Hatcliff was no longer in Beatrice black and orange, but red. Lacey Sprakel traded Crofton maroon for blue threads.

But you didn't need a paper roster to figure out who No. 12 in blue was.

Pius X teammates Markowski, Aschoff will be on opposite sides for NCA all-star game

A bullet of a pass from the top of the key to Avery Kallman in the paint, and later a flip-from-the-waist layup, was all one needed to see to know that Jillian Aschoff had entered the game.

Aschoff was no longer wearing Lincoln Pius X green, but the 5-foot-7 point guard was still making plays similar to the ones she created while piloting the Thunderbolts' run to back-to-back state championships.

The future UNK Loper finished with 11 points in helping lead the Blue all-stars to an 84-73 win against the Reds in Monday's NCA all-star game at Lincoln North Star.

"It's fun because the pressure is off and you're playing with players that are the best in the state," Aschoff said. "I miss my old teammates, but this is a lot of fun."

Monday's girls all-star game had plenty of star power, and we were quickly reminded how strong the point guard play was in Nebraska over the past few years.

The contest featured two-time first-team Super-Stater Allison Weidner, who is headed to Nebraska after cementing her spot as one of the best point guards in state history.

There was Grace Cave, the first-team Super-Stater from Weeping Water who is headed to UNO.

Aschoff, who is Pius X's all-time leader in assists, is headed to Nebraska-Kearney. West Point-Beemer's Sidney Swanson will play at Sioux Falls.

Surrounded by many of the other top players from the state, Monday night was a great chance for these point guards to showcase their skills.

"There was good point guard play (Monday)," Blue coach Bob Hayes said. "There were some good point guards left off of this (game). Nebraska is loaded from (Classes) A to D with point guards. You can pick your class and there are outstanding point guards in any class. Nebraska girls basketball was on display there and it was pretty good."

No longer a secret in western Nebraska, the Loomis-Goltl sisters are seeing their recruiting explode

Weidner impressively weaved and cut her way in transition for two points in the first half. Aschoff showed her range by hitting a couple of threes. And there were behind-the-back passes.

Hayes, from Ponca, even had Weidner and Aschoff on the court at the same time during the second half. And with Cave on the other side, the floor featured arguably the three best passers in the state.

Weidner, who had 13 points, and Aschoff tried to set up an ally-oop in the final moments of the game.

"We were talking on the bench, like we got to make this exciting, drop a back ally-oop," Aschoff said.

The play didn't work, but all was good.

"I never played alongside Allison so it was a really good experience," Aschoff said. "I feel like our passing and basketball IQs are pretty similar. We think a lot of the same things."

* Count Sprakel as one of the players glad to have Weidner and Aschoff on their side. The three-time all-stater from Crofton finished with a game-high 23 points. The post player showed her range, hitting a three from the top of the key to give the Blues a 77-63 lead with less than 5 minutes remaining.

* Samantha Moore played in the smallest class during her prep career while at Mullen. But playing against some of the state's best Monday, the 6-0 guard showed why she has great potential to transition well at Division II Nebraska-Kearney.

The Class D-2 all-stater finished with a team-high 19 points on 8-of-19 shooting.

"Coming from a D-2 school I was a little scared coming in," said Moore, a multi-sport standout. "These are like the best players in Nebraska and when I got here I was a little scared, but right when I walked in, my team, we clicked like that and it was a great experience."

* Bennington's Madalyn Elwood had one best of the shots of the game. The 5-7 guard hit a three-pointer from the wing at the halftime buzzer to give the Blue team a 45-41 lead.

* The Red team was down two all-stars Monday. Lincoln Pius X's Alexis Markowski, the Journal Star's 2021 Super-State honorary captain, did not play, taking a cautious approach while working her way back from a hamstring injury. Norris' Brianna Stai, who had her right arm in a sling, was unable to play.

"I have no idea which one it was," said Moore, who worked on a golf course. "It was the outdoor one with a lot of water because we lost a lot of balls."

The Gessert sisters are playing AAU ball with Elite Basketball this summer.

July, typically a big month for prospects and coaches, is here, and for the first time in a long time, college coaches can attend tournaments.

Kwat Abdelkarim has hit some clutch shots in Lincoln North Star's gym before. He added a couple more Monday night.

The NCA all-star series wraps up with softball on Wednesday, headlined by three Super-Staters.

NCA all-stars: Volleyball match gives teammates a new look at each other, including a pair of future Huskers

Norris' Kalli Kroeker and Molly Ramsey have been friends for as long as they can remember. Waverly's Whitney Lauenstein's and Omaha Skutt's Li…

Shepard, who led Lincoln Christian to a hoops title in 21991, influenced high school athletics administration and coaching over multiple decades.

The girls partnership comes about a year after the Lincoln Supreme and Team Factory boys programs merged to form the Nebraska Supreme.