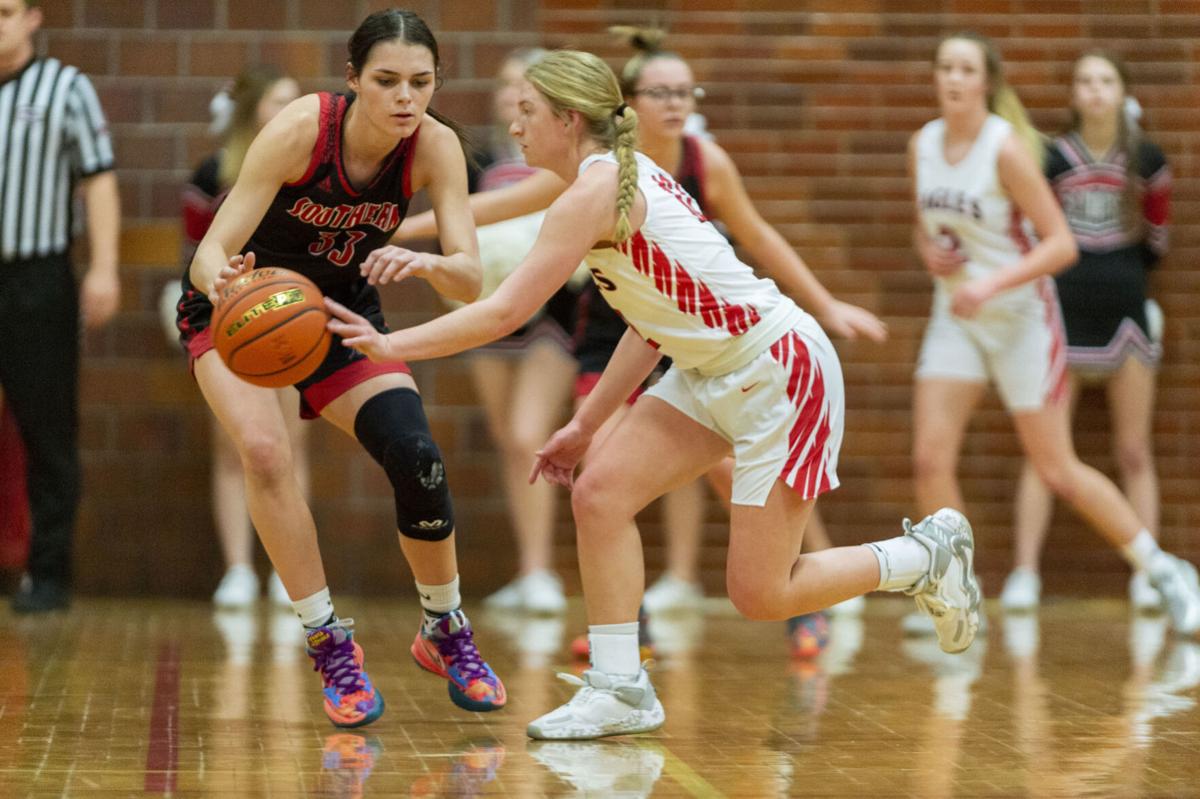 Johnson-Brock's Audrey Sandfort attempts to take possession of the ball from Southern's Callie Cooper on Thursday in Beatrice. 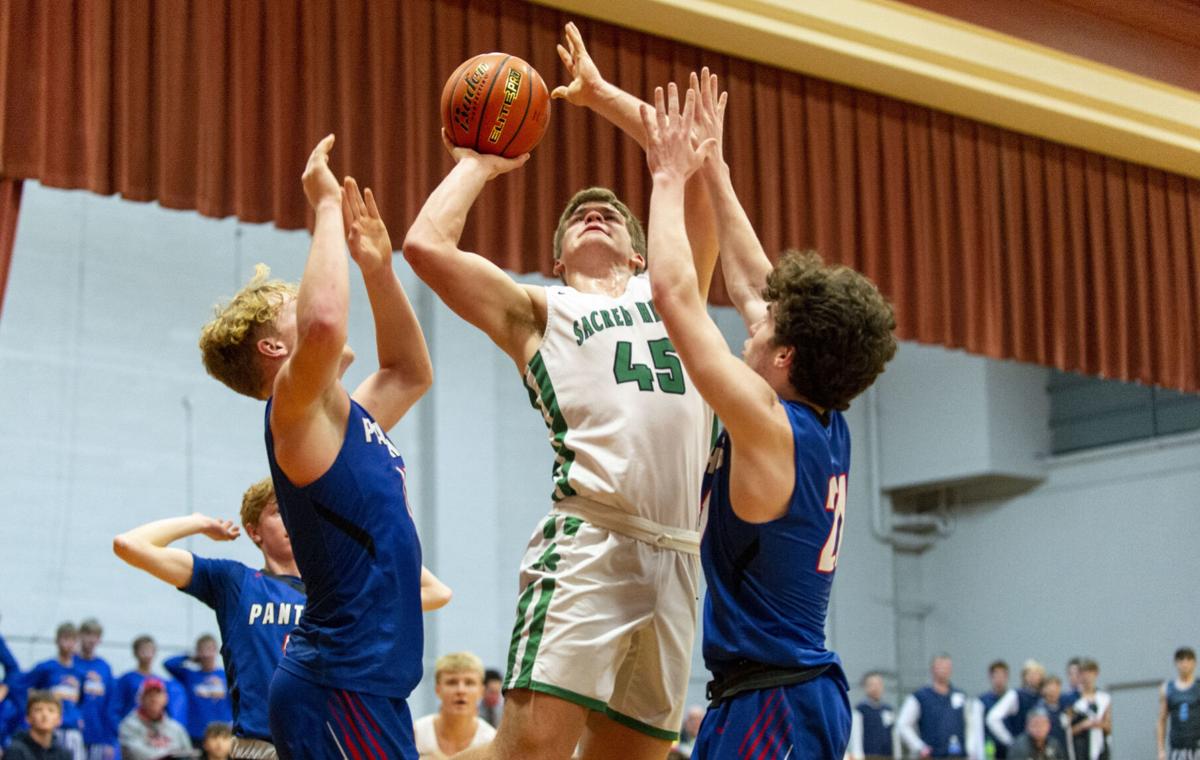 The Johnson-Brock senior also needed to knock them down or else hear about it at home.

"Kind of had that thought, my dad at home, he's going to yell at me if those don't go in," Sandfort said.

Millikan drops 35, but Wahoo's third-quarter rip too much for Platteview to overcome

Luke Mullin: Whether scoring, rebounding or blocking shots, elite big men are making waves all over the state

Sandfort indeed hit both free throws to send a MUDECAS A Division girls tournament semifinal game against Class D-1 No. 8 Southern into overtime, and that sparked a 43-38 Eagle victory Thursday at Beatrice City Auditorium.

The Eagles (11-2) will play Class D-2 No. 1 Falls City Sacred Heart in Friday's 8:15 p.m. championship game after the Irish cruised to a 48-20 win against Parkview Christian in the other semifinal matchup.

Johnson-Brock trailed by as many as four points in the fourth quarter of a defensive battle that saw both offenses handcuffed by zone defenses. But the Eagles battled back and tied the game on Sandfort's free throws.

Southern (12-2), which got a great fourth-quarter effort and 21 total points from junior Callie Cooper, didn't get a clean look for the final shot of regulation.

Johnson-Brock coach Mitchell Atkinson said Sandfort, a captain, was the right player to have on the line late in the game.

"I obviously knew this was something big I had to do, that it was either this or we might not win," Sandfort said. "I just knew I had to put them in."

Johnson-Brock has lived up to its No. 1 tournament seeding and will go for its first MUDECAS championship — A or B Division — since 2000 when the Eagles won B.

"It's a big deal for these girls," Atkinson said. "We put a lot of work in the summer, they've been working hard every day after school. It means a lot for the community and these girls to get to the finals."

'She’s immersed in it': Yates talks, walks hoops and she's scorching the nets for McCool Junction

They'll get a shot at medal one of three Friday.

"We've slowly been working our way and this will be one down on the list if we can get there," Sandfort said.

Falls City Sacred Heart (11-3), a year after winning MUDECAS, is back in the final. The Irish seniors won their first MUDECAS title last year as juniors, and now they're looking to go for two in a row. FCSH has won six titles here since 2013.

"That's something we talk about when we start the year in November," FCSH coach Luke Santo said. "We want to win our holiday tournament, MUDECAS in January. We have so much respect for this tournament and everything it stands for, so just to be back in the final and have that opportunity, it's good and it's special for these seniors."

Senior Erison Vonderschmidt had a game-high 14 points for the Irish, who closed the first half on a 24-0 run. The Irish made sure to immediately crowd Parkview post player Kerolene dos Santos, who had five points, when she touched the ball.

Palmyra won a B Division championship at last year's MUDECAS Tournament. Now the Panthers are a victory away from taking the A Division.

Palmyra (8-4) jumped to a 10-point lead at halftime and then relied on defense to fend off the Irish, who got to within two after three quarters and had two chances to tie the game with threes in the final seconds.

"We got a bunch of kids that have played a lot of basketball," Palmyra coach Zach Wemhoff said. "We can score points (but) our emphasis has been playing defense, and I thought our boys stepped up."

Palmyra will be looking for its first A Division title at MUDECAS since 1989.

The Panthers will play Freeman in Saturday night's final. The Falcons advanced with 46-35 win against Tri County. Freeman won the season opener against Palmyra 40-36.

Photos: The sights from the MUDECAS basketball semifinals

A look at Thursday's results from the prep hardwood.

A look at Thursday's results from the prep hardwood.

After the "freak accident," Bargen never lost any of his explosiveness. Instead, he worked his way back to become an even better and stronger player.

A look at highlights from Thursday's top city action.

Here's a look at Thursday's box scores from boys action.

Here's a look at Thursday's box scores from girls action.

Lincoln High knew it had a difficult weekend of basketball, but J'unti Franklin made sure the Links wouldn't come away with a win.

Rachel Magdanz won't soon forget, if at all, the game she reached 1,000 career points.

Millard South saw a 15-point fourth-quarter lead vanish before using one final surge to survive against the Links 77-68 at Ed Johnson Gym.

Three Falcons finished in double figures, including junior Carter Ruse with a game-high 23 points, to lead Freeman to a 57-45 win against Palmyra.

Defense has Wahoo in the Class C-1 title conversation, and it's a conversation that has gotten a lot more interesting over the past two weeks.

Johnson-Brock's Audrey Sandfort attempts to take possession of the ball from Southern's Callie Cooper on Thursday in Beatrice.