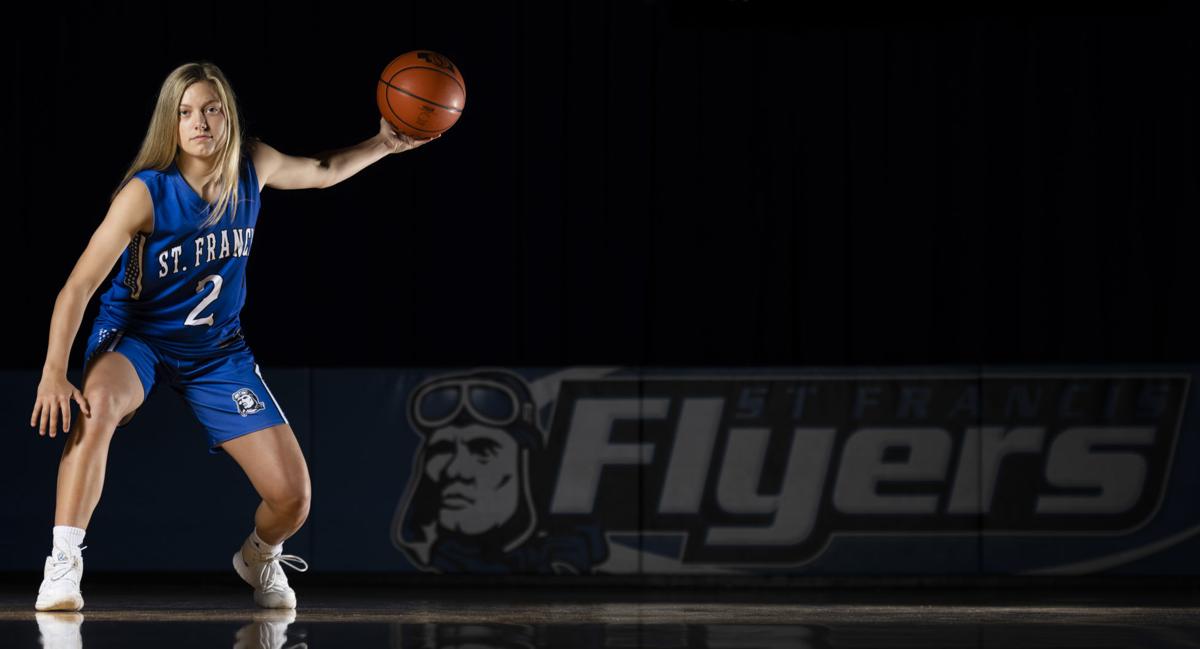 After leading Humphrey St. Francis to a 25-0 record and a Class D-2 state championship, Husker hoops recruit Allison Weidner is the Journal Star's girls athlete of the year. 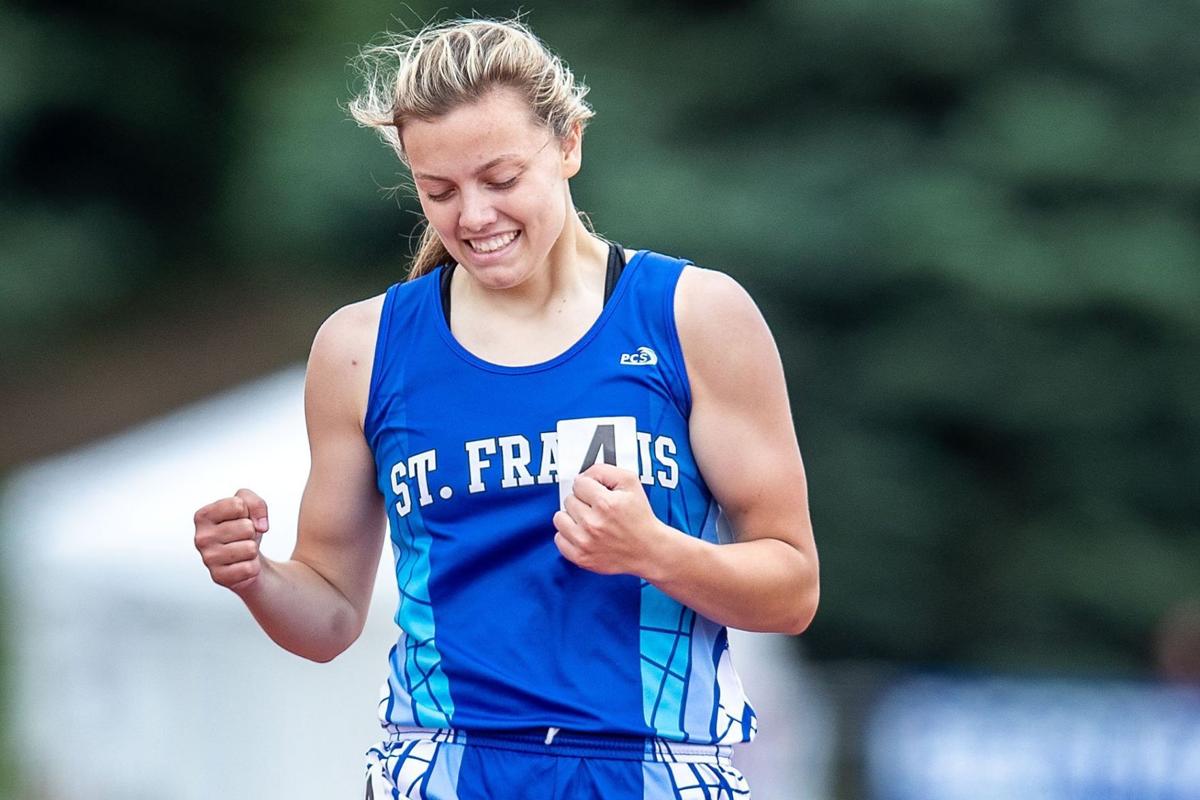 Humphrey St. Francis' Allison Weidner celebrates her win in the 400 meters during the Class D state track meet on May 20 at Omaha Burke Stadium. 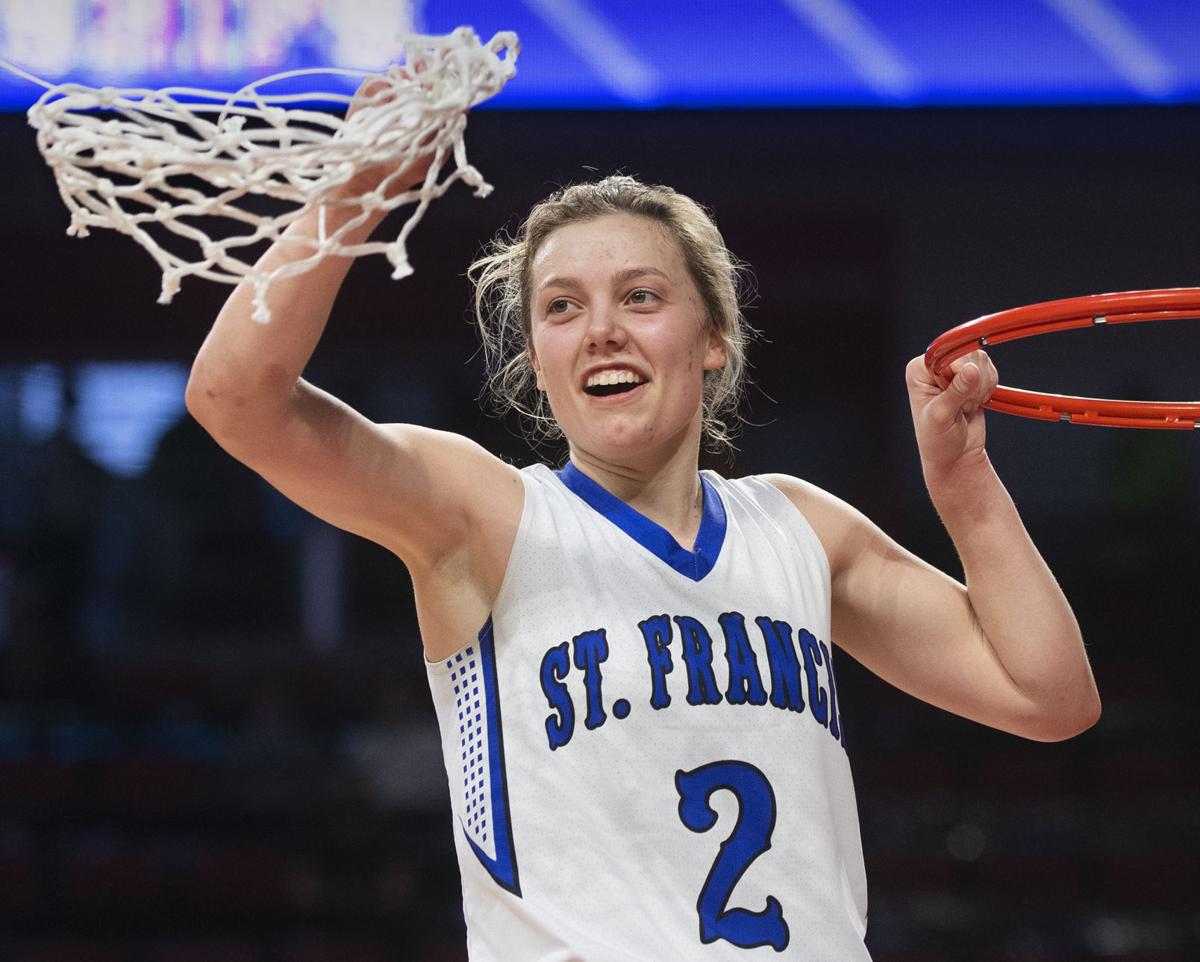 Just the other day she and her older brother Nathan went out to the shop to play a little one-on-one.

"It gets pretty chippy," she said. "Elbows are flying and all that stuff."

Even laundry day at the Weidner household can turn into a competition of who can fold their clothes the fastest.

The laundry room. The front yard. The basketball floor. The track lanes. …

"What I always tell people is just tell Allison she can't do something and then just sit back and watch," her high school basketball coach, Bryan Reichmuth, says.

No matter the setting, the Humphrey St. Francis three-sport star is always determined to win.

"She reminded me often that she doesn't really care for track, but she likes to compete," St. Francis volleyball and track coach Dean Korus said. "And when she gets onto the track, I mean, she gives you everything she's got, and she's tried so many different events during the course of her career.

Weidner's competitive chops led to a memorable senior season. She guided the Flyers to an elusive state basketball championship, she became a three-time state champion in the 400- and 800-meter runs, and she helped her team reach state in volleyball.

Weidner is the Journal Star's 2021 girls high school athlete of the year.

"You're never going to get another one like her," Korus said. "No way. You might have one girl in one sport that just really excels. She excels in all three of them."

Basketball is and has always been Weidner's best sport. Her ability to score, pass and manage games makes her one of the top point guards to play in this state in a long time. She's No. 3 on the state's all-time scoring chart with 2,282 career points. She's currently at Nebraska, getting ready to begin her Husker hoops career for Amy Williams.

No doubt, basketball took up a lot of focus and time for Weidner. But she made sure to dedicate time to her other sports, too. She always wanted to be a three-sport athlete.

That meant balancing a busy and challenging schedule. In the fall, she'd attend volleyball practice before heading home to get a bunch of shots up on a makeshift basketball court in the family shed.

In the spring, when Weidner also had AAU basketball commitments, she would reel off a track workout, get into a car and drive two hours to Omaha for basketball practice with Nebraska Attack. And then school tasks.

"It was stressful because I wouldn't get home until 10 or 11, and then I'd have homework," Weidner said. "But it was definitely worth it."

Weidner's athletic ability is apparent on the basketball court, where she averaged 25.0 points, 7.0 rebounds, 6.4 assists and 6.4 steals per contest as a senior while earning first-team Super-State honors for a second straight year. But track, though not her favorite sport, revealed another set of gears.

Weidner's signature events are the 400 and 800. She never lost an 800 race in high school. She lost a 400 race maybe once or twice, Korus said. She tried all the events — the 200, the hurdles, the high jump and the triple jump.

"Any event, she wanted to try and get and set the school record," Korus said of Weidner, who had a hand in 33 of her team's 34 track points at state. "That was her goal."

Weidner would have been a great cross country runner, her coaches say. But she chose volleyball in the fall because she loves the team element.

Boys athlete of year: Sure, Christo excels in three sports, but his numbers off the field may be more impressive

"Seeing her history, I was like, 'Gosh, this girl should be a cross country runner,'" Reichmuth said. "But she is so driven by the team function that I don't think it was ever a consideration.

"But I promise you, she would have been a state champion in that as well."

Said Weidner, who also earned first-team all-state honors in volleyball, "I really like being around the team atmosphere and I like that part of sports. Just being with my friends, to share that dream with them, I think that played a big role."

Weidner developed her competitive drive at home. Her older brothers Nathan and Brandon would play football in the yard. Little sis wanted to play, too.

She handled it like a champ, and it's a big reason why the 5-foot-10 athlete could drive through traffic in the lane and score at an impressive clip.

She never stops looking for ways to gain an edge, either.

Weidner would shoot text messages to Reichmuth at night on something she saw on film. She wasn't going to let "Well, she's from a small town" derail her dreams of playing Division I basketball. With the help of Zach Isherwood at Nebraska Attack, Weidner gained exposure on the recruiting trail and landed DI scholarship offers.

And though her basketball arsenal is already pretty sharp, Weidner goes to Lincoln for shooting sessions with Thomas Viglianco.

Weidner doesn't want to stop at a Husker scholarship either. She said she has big goals for herself at Nebraska.

In Weidner, the Huskers are getting a point guard with great court vision, a playmaker who can dazzle with her quickness and array of passes.

Simply, NU is getting a winner.

Humphrey St. Francis went 99-11 in basketball and 94-26 in volleyball during Weidner's prep career. The only thing that kept her from winning four state gold medals in the 400 and 800 was the COVID-19 pandemic.

The games at Pinnacle Bank Arena, the gold medals, the district title wins, her teammates and coaches, a 25-0 record and state basketball title, a great track finish serving as the icing on the cake — Weidner cherishes it all.

"I love the fact that I grew up in a small town, and I've been bonding with these girls, around these girls for as long as I could remember because we all had older brothers playing together," she said. "It's just been a really cool experience to see the things that we've accomplished, that I've accomplished.

"I know a lot of people dream of winning one state title, (and) to be part of such a successful program and school, I'm really blessed to be a part of them and really thankful for all of that."

Q&A with NSAA's Jay Bellar on playing high school sports during COVID-19: 'It was just a question of can we and should we'

The pressures, the big decisions and the nervousness, recalled by the NSAA's Jay Bellar, who reflects on a successful COVID-19 season.

Girls co-coach of year: Following lead of his Pius X mentors, Ryan Psota leaving his own imprint with Bolts

Ryan Psota says, "We've had some really good long-term successful coaches here that I can take away a lot of knowledge from." He's not kidding.

Ryan Psota and John Carlson are the co-coaches of the year. Here's a look at other significant coaching performances this past season.

Tommy Johnson has been named the new girls basketball coach at Lincoln North Star, and he'll be aided by a familiar face from the local hoops scene.

Tears from pain replaced by tears of joy for Bekka Allick, who gets chance to represent Team USA in volleyball

Bekka made the U16 team for nationals in 2020, but camps were canceled due to COVID-19. Now she has another chance to join a Team USA squad.

July, typically a big month for prospects and coaches, is here, and for the first time in a long time, college coaches can attend tournaments.

The Gessert sisters are playing AAU ball with Elite Basketball this summer.

This year's match features arguably one of the best groups of all-star volleyball players assembled by the Nebraska Coaches Association.

A recruiting process that typically takes years was sealed over the course of a few months: "I don't know if I have really let it sink it yet."

A new generation of Thunderbolts are ready to make their mark on the Lincoln Pius X volleyball program.

The Huskers will be tested in early January, when it plays four straight games against teams that made it at least the NCAA Tournament last season.

After leading Humphrey St. Francis to a 25-0 record and a Class D-2 state championship, Husker hoops recruit Allison Weidner is the Journal Star's girls athlete of the year.

Humphrey St. Francis' Allison Weidner celebrates her win in the 400 meters during the Class D state track meet on May 20 at Omaha Burke Stadium.