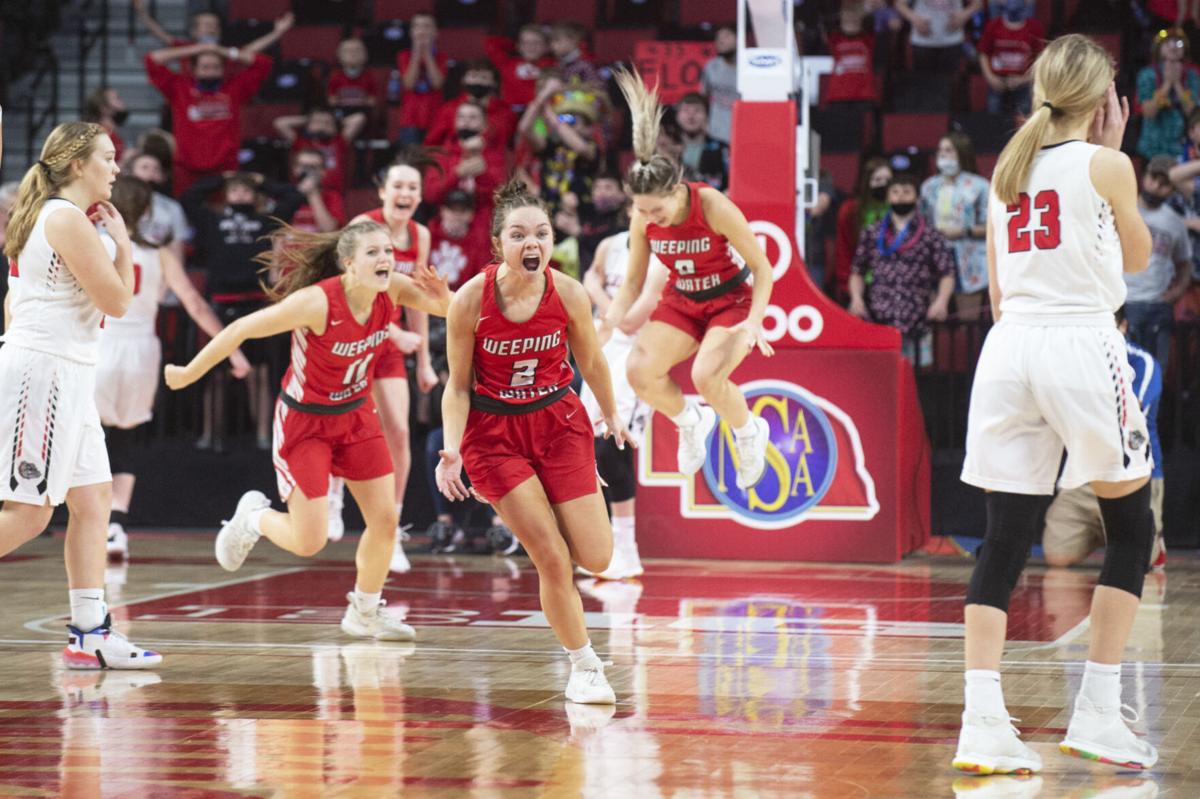 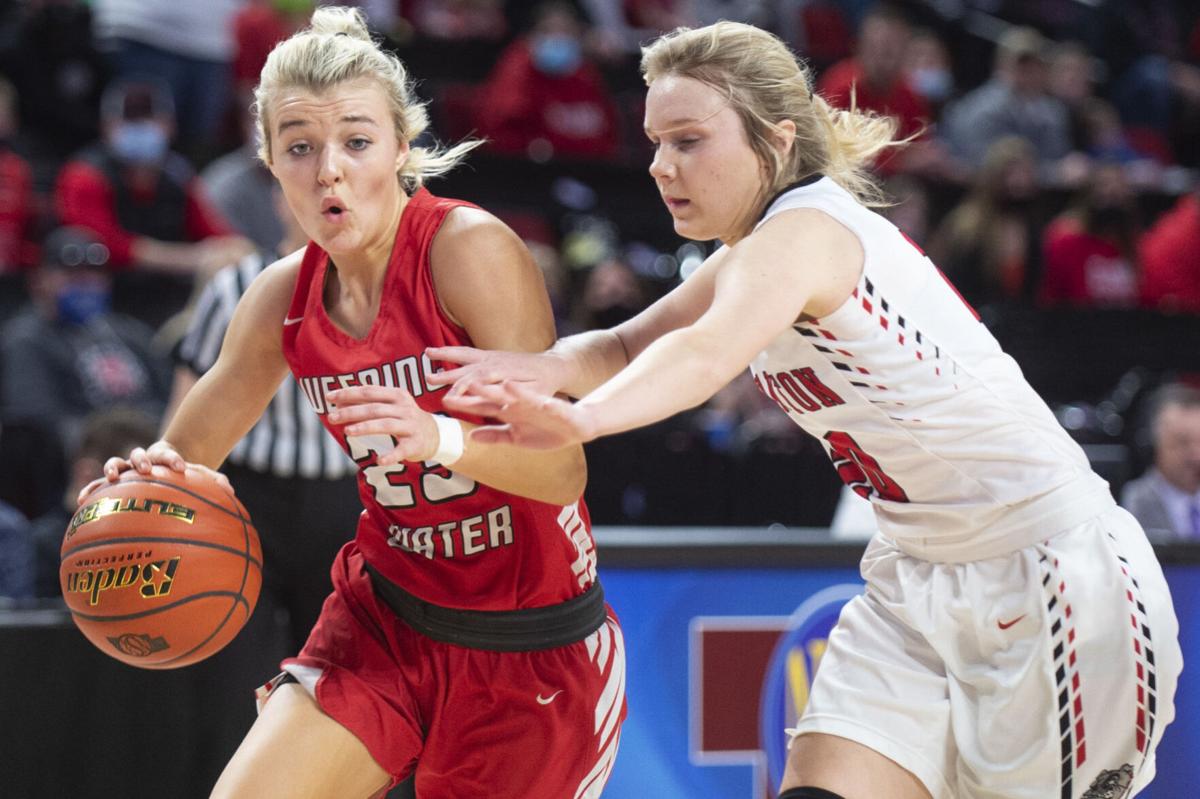 Shooting baskets in the driveway growing up, Grace Cave always envisioned her game-winning moment with a state championship on the line would come at the free-throw line.

It’s a little difficult dreaming of a contested layup practicing by yourself.

The Weeping Water 5-foot-9 senior all-state guard did what came naturally after a Kaci Pierce basket put Pleasanton in front by one point with 12 seconds left.

Cave took the inbounds pass and didn’t stop dribbling until she hit the game-winning layup with 5 seconds left, lifting the third-ranked Indians to a 40-39 win over the 2020 state champions in the Class D-1 girls state basketball finals Saturday morning at Pinnacle Bank Arena.

"With it being a contested layup, it was just like any other layup, more like a pickup game than a state championship game, you just want to make them all," said Cave, an Omaha recruit who finished with a game-high 16 points, five assists, two steals and two blocks.

"This feeling is nothing like I’ve ever felt before," she added.

Weeping Water (24-5) won its first girls state basketball title in school history, but it appeared the top-ranked Bulldogs (27-2) might pull off the come-from-behind win in the final seconds.

They wiped out a six-point deficit in the final 2:17 on eight straight points by Pierce (team-high 15 points), who hit a pair of three-point baskets before her go-ahead basket.

"I didn’t know how much time was left, so when Karley (Ridge) inbounded it, I just went no brakes, all gas," Cave said. "I had a teammate in the corner in the last couple of seconds, I was going to pass it, and then I saw the girl kind of shade over towards the corner. I kept it and rolled it off my fingertips. Thank God it went in."

Weeping Water coach Joel Haveman thought about calling a timeout after Pierce’s basket until, "I saw Grace on the run," he said.

"That’s who we would’ve went to anyway, so once you have a full head of steam, there’s nowhere else to go," he added. "I had a feeling she was going to keep it, and I’m glad she did. She knows that’s in her game and she makes contested layups all the time."

The Indians got production from their only bench player to get in Saturday, 5-5 junior Brooklyn Rathe, who had nine points on 3-of-3 shooting from the field, and 3-of-3 at the free-throw line. She had scored just 16 points the entire season coming into the state finals.

"In practice, we saw her progress through the season, so we knew she could do that," Haveman said. "Grace put her in positions where she could just catch and score."

Ridge, a junior, netted six of her eight points in the fourth quarter. Her basket with 2:40 left gave Weeping Water a 36-30 lead with 2:40 remaining.

"I was so nervous," Ridge said. "I knew it was going to be a close game, I had a couple wide-open shots, so I just took them."

Pleasanton’s size advantage forced Weeping Water into a zone defense, and the gamble paid off as the Bulldogs shot just 32% from the field (16-of-50) and missed their first 11 three-point attempts before Pierce’s two late threes.

The Indians also survived a 41-25 Pleasanton rebounding advantage, 20 of which came at the offensive end.

"They have a special player, Cave’s good, she got it down the court and got it in the hoop."

This was Weeping Water’s third straight state tournament appearance, and the Indians avenged first-round losses to Hartington Cedar Catholic and Pleasanton the last two years on their way to the championship.

"There’s no feeling like this," Cave said. "I’ve been dreaming of this day since I was 4 years old when I began playing basketball." 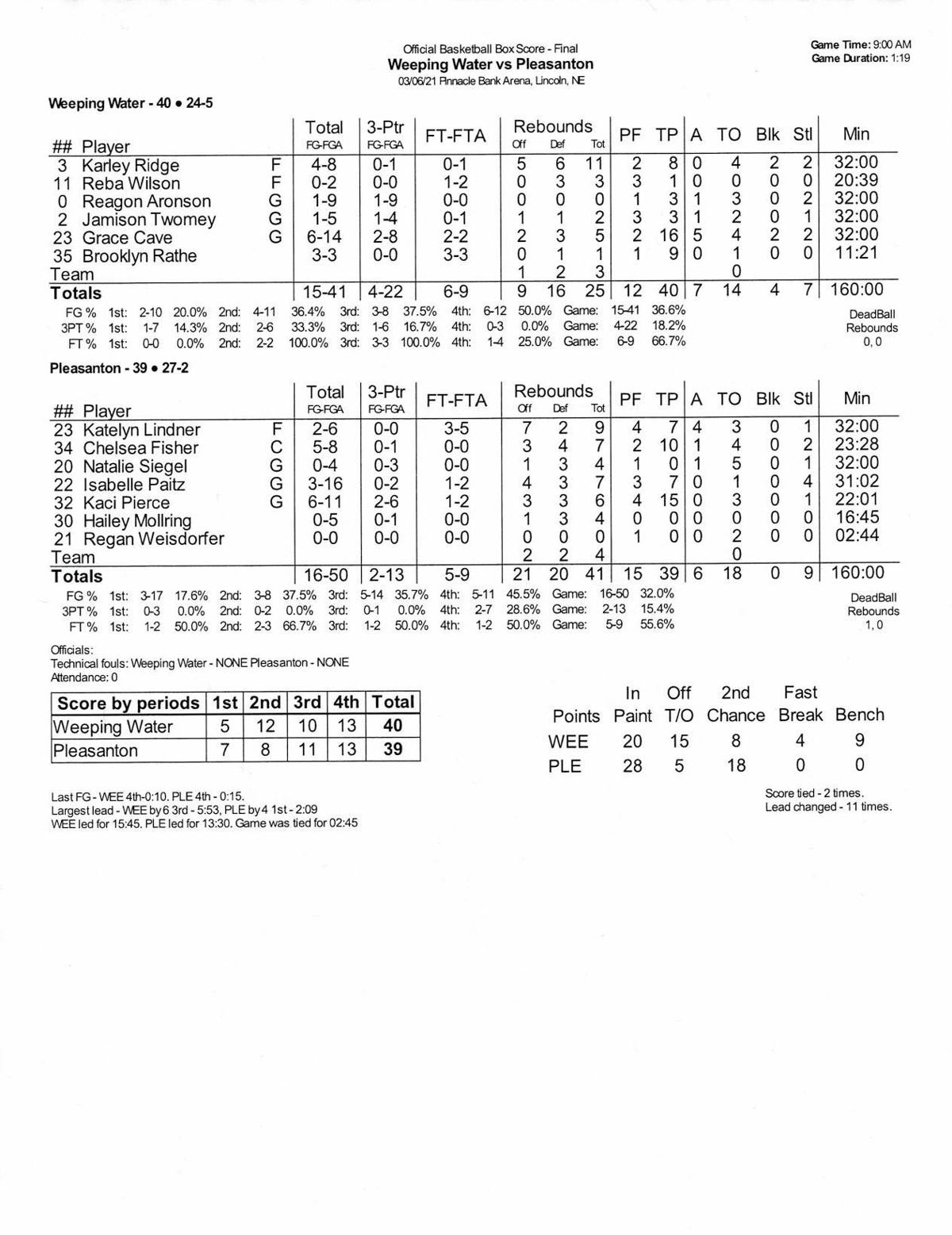 Pleasanton beat the Knights in both the girls basketball and volleyball championships last season. This time, a high-stakes semifinal awaits.