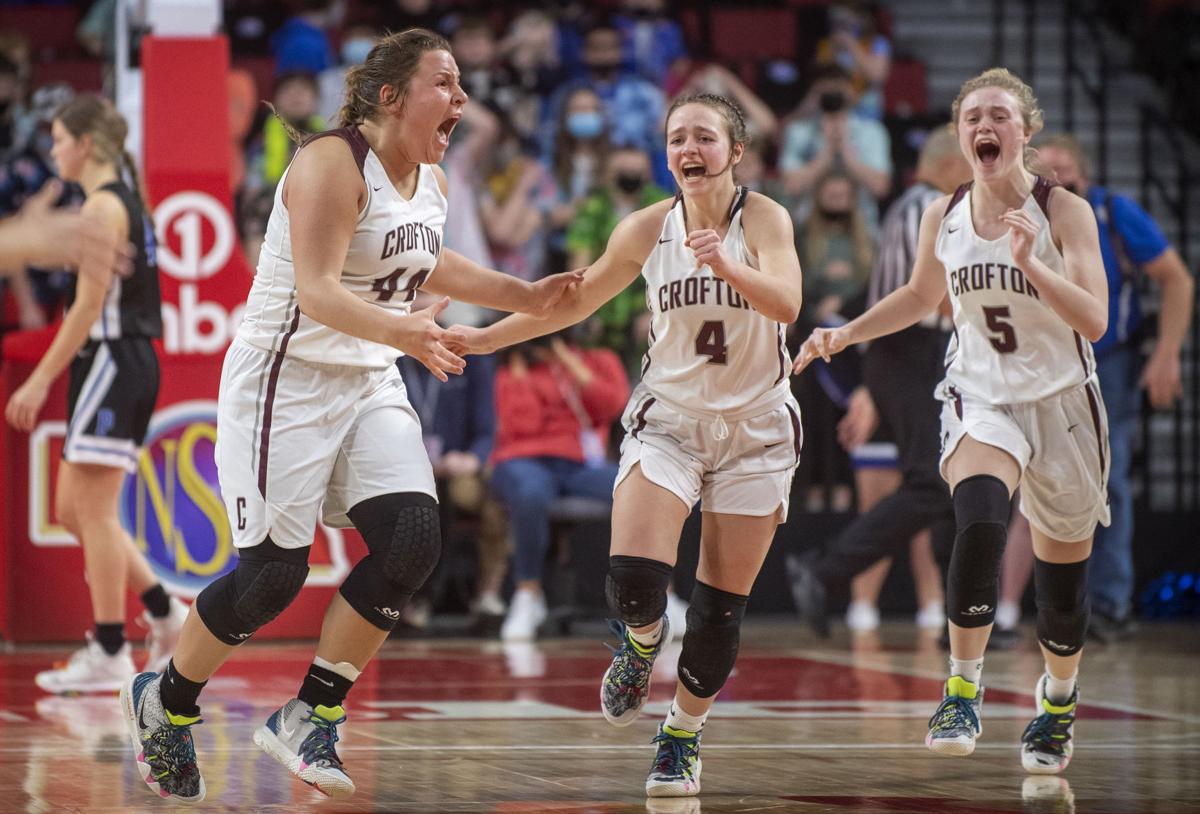 Crofton’s Lacey Sprakel (44), Jayden Jordan (4) and Ella Wragge celebrate at the buzzer after coming from behind to defeat Ponca in the Class C-2 girls state basketball final Saturday at Pinnacle Bank Arena. 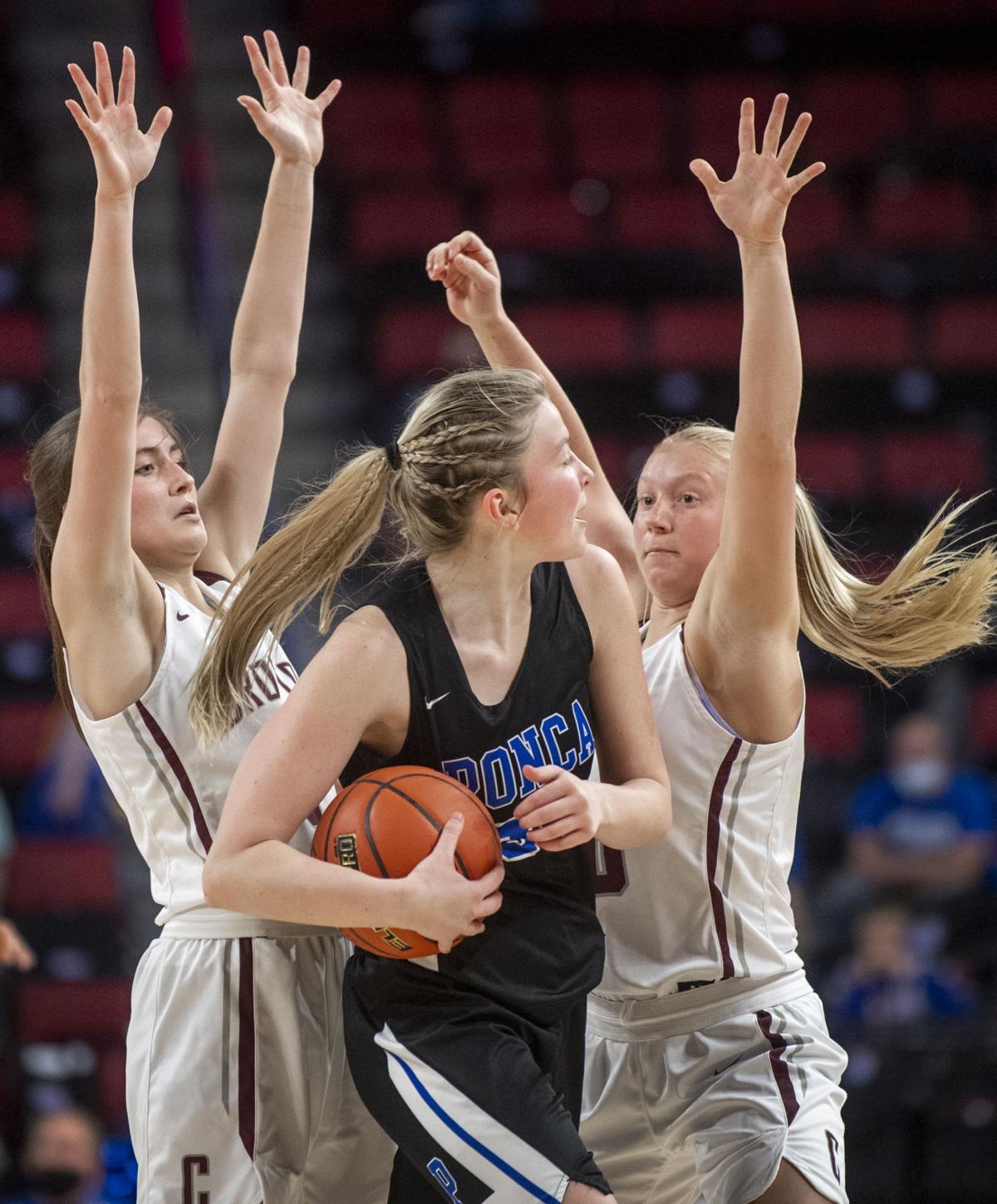 Ponca’s Ashlyn Kingsbury (34) gets doubled-teamed by Crofton’s Alexis Folkers (left) and Kaley Einrem (10) in the second half on Saturday during the Class C-2 state championship final at Pinnacle Bank Arena.

It may have taken longer than usual, but Crofton’s stingy, pressure defense came alive just in time to help the Warriors capture their ninth state title.

Trailing 38-34 entering the final eight minutes, the Class C-2 top-ranked Warriors ratcheted up the full-court pressure, holding No. 8 Ponca to just one field goal in the quarter as they rallied for a 46-42 win in the state championship Saturday night at Pinnacle Bank Arena.

“It took us a while tonight,” Losing said of his team kicking into high gear. “But when we needed it in the fourth quarter, we were able to pull out some plays and get it done.”

Ponca’s only bucket of the final quarter came on Gracen Evans' jumper at the 3:49 mark, giving the Indians a 40-37 lead. However, the Warriors closed the game on a 9-2 run. Junior guard Alexis Folkers put Crofton on top for good at 41-40 with a steal and layup with 2:50 left. Folkers and Jayden Jordan led the Warriors with 11 points each.

“I knew we had some momentum and I just tried to cheat and get the steal at that point,” Folkers said.

Free throws sealed the win, with Crofton (26-3) connecting on 10-of-12 over the final period. Senior guard Kaley Einrem knocked down a pair to make it 45-42 before Jordan hit the game-clinching free throw with under 5 seconds.

Sprakel finished a perfect 4-for-4 from the line while scoring eight points and collecting nine rebounds. She was engaged in a physical battle down low all game with Ponca’s Samantha Ehlers and Ashlyn Kingsbury.

Ehlers, along with fellow sophomores Kingsbury and Evans, scored 40 of the Indians’ 42 points. An Ehlers’ three-pointer midway through the second quarter gave the Indians their biggest lead of the game at 26-19.

Ponca coach Bob Hayes said Crofton’s pressure defense, along with some breakdowns on the press break, turned the tide of the game.

“Crofton really picked up the defense that fourth quarter,” Hayes said. “We had some problems and confusion on the press break, and they took advantage."

“We went toe to toe with them and had our opportunities. We had a couple of shots that rimmed out that other times have fallen for us,” Hayes said.

Crofton, which ended a title drought dating back to 2016, rolled into the finals by knocking off its first two state tournament opponents by a combined 43 points.

But Losing knew a win Saturday wouldn’t come as easy.

“We knew tonight would be different,” Losing said. “Ponca is at a different level defensively. We just needed to rebound, get some defensive stops and stay aggressive.”

Said Sprakel, "I give a ton of credit to Ponca for their defense. They wanted it just as bad as we did.”

“Her passing is close to none and not a lot of players can make the passes Jill can."

Girls state hoops: Your 30-second briefing on each of the six gold-medal games

Looking for the nuts-and-bolts from Championship Saturday? We've got you covered.

Crofton’s Lacey Sprakel (44), Jayden Jordan (4) and Ella Wragge celebrate at the buzzer after coming from behind to defeat Ponca in the Class C-2 girls state basketball final Saturday at Pinnacle Bank Arena.

Ponca’s Ashlyn Kingsbury (34) gets doubled-teamed by Crofton’s Alexis Folkers (left) and Kaley Einrem (10) in the second half on Saturday during the Class C-2 state championship final at Pinnacle Bank Arena.