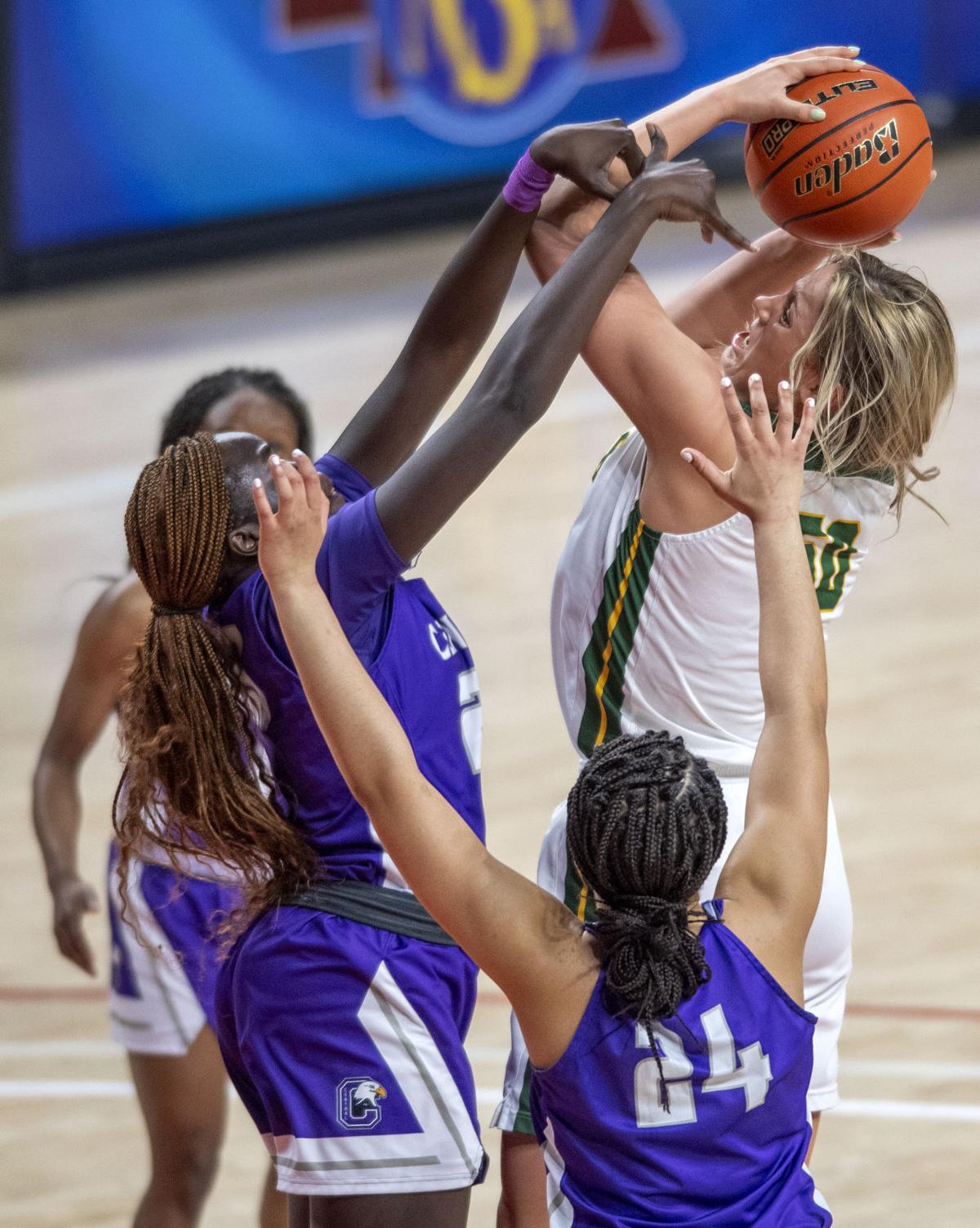 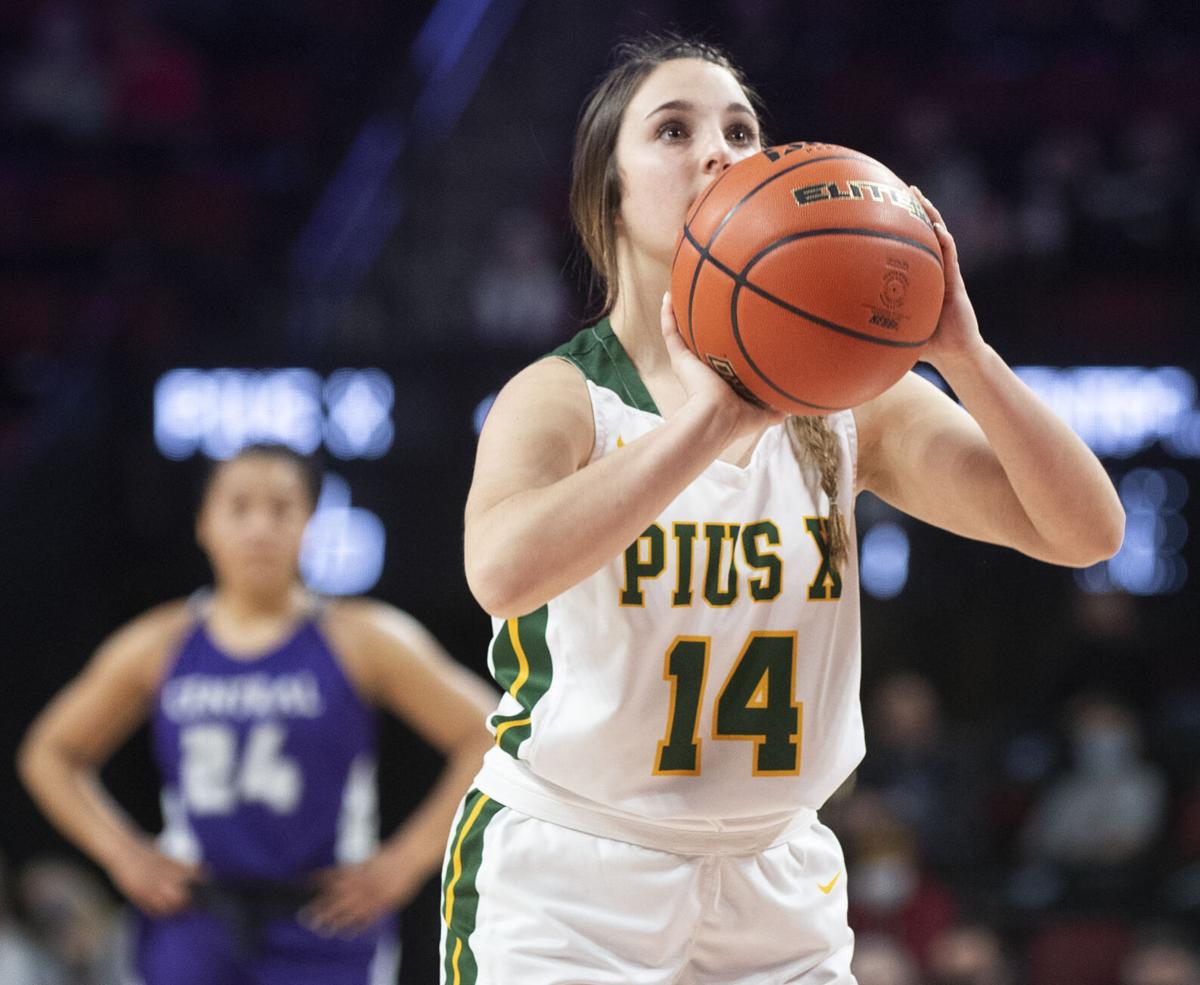 Lincoln Pius X’s Lexi Zahourek (14) shoots two free throws in place of teammate Jill Aschoff, who went off momentarily to have her leg wrapped by a trainer late in the fourth quarter, during a Class A girls state tournament semifinal game Friday at Pinnacle Bank Arena. 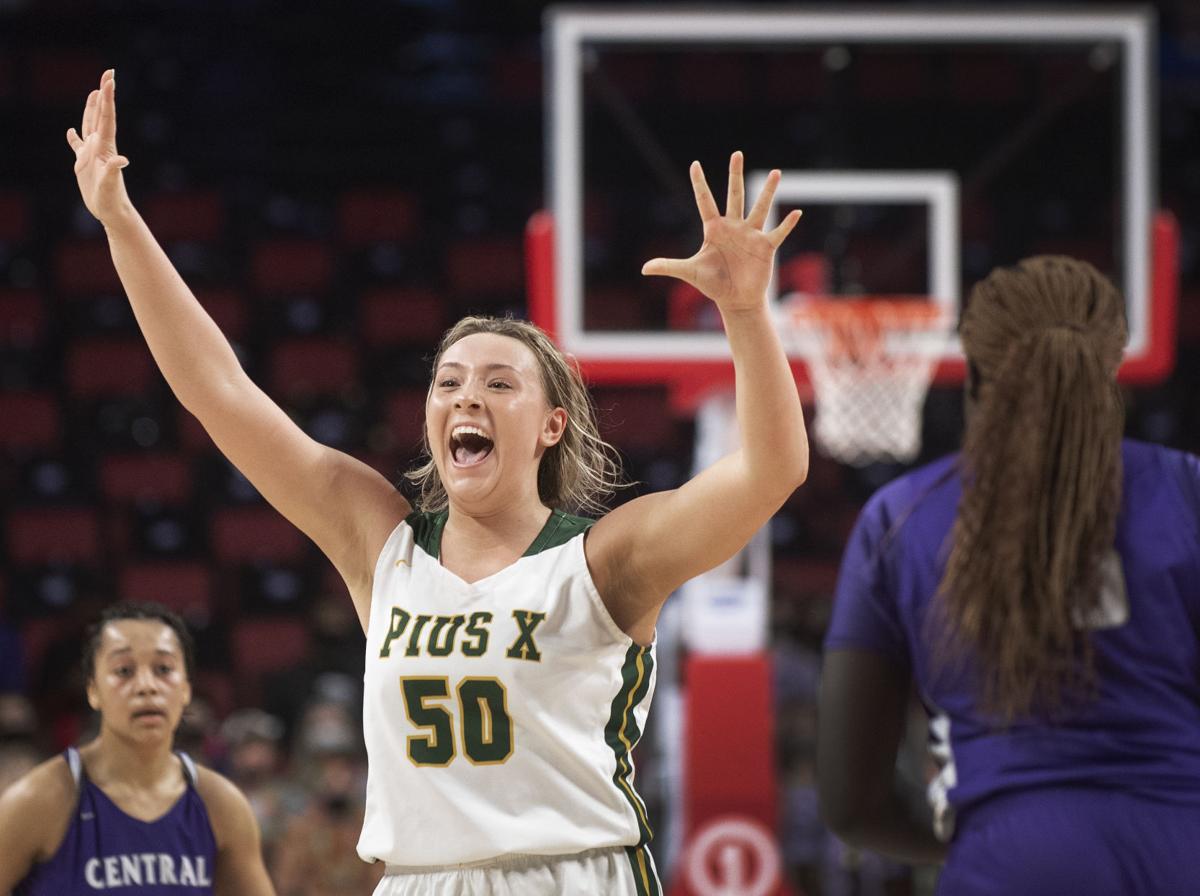 Lincoln Pius X’s Alexis Markowski (50), who had 30 points and 27 rebounds, celebrates as the final seconds tick off the clock against Omaha Central in a Class A girls state tournament semifinal game Friday at Pinnacle Bank Arena.

For the first time this season, Alexis Markowski was going to be looking up at her defenders.

Most Class A teams do not have the size to match the 6-foot-3 star from Lincoln Pius X, and it’s a big reason why the Thunderbolts entered the Class A state tournament at 22-0.

But Omaha Central has size.

Markowski worked against her father, Andy, a former Husker, during Friday’s shootaround and then a handful of hours later posted one of the most dominating performances in state history.

Markowski finished with 30 points and 27 rebounds in leading top-ranked Pius X to a 47-38 victory against the No. 5 Eagles in the state semifinals at Pinnacle Bank Arena.

The Nebraska women's basketball signee had a double-double less than 10 minutes into the game. She had 17 points by halftime, and 30 by the end of three.

And the Bolts, who struggled at times offensively — only two made threes and 17 turnovers — needed just about every one of those points.

“You can tell her will to win just by watching her play,” he said. “Running the floor, getting rebounds over two or three big bodies. She’s just a heck of a competitor who has a high ceiling of doing anything she has to do to get us over the top.”

Markowski has performed at a high level on the state stage before. She tied a Class A state tournament record last year with 80 points over three games in helping lead the Thunderbolts to a state title. She posted three double-doubles at PBA last year.

“Any game I’m going to go out and I’m going to give it my all,” said Markowski, who entered the tournament averaging 23.3 points and 12.1 rebounds per game. "If that is getting boards or points or whatever, I’ll do that. It’s state (and) I always feel the need to step up in the biggest moments."

Adison Markowski’s three-pointer late in the second quarter helped Pius X close the first half with a 25-21 lead. Omaha Central tied the game at 25-25 in the third before the Bolts took some control with a surge that included 13 third-quarter points from Markowski. Junior Charlee Hagedorn got a putback during the third-quarter push, too.

"Just effort plays in the third quarter got us some separation, so it was huge," Psota said.

Friday’s opening semifinal was one of the more intriguing games of the entire Class A season as it matched Pius X against a team that started 6-3 junior Nyanuar Pal in the middle and had 6-5 Ital Lopuyo coming off the bench. Anniya Webb stands at 5-10.

Markowski, who plays against many big post players during club season, said she was looking forward to the challenge. So much so, she had her dad try to post up against her in practice Friday.

It didn’t go so well for Andy.

“I was doing a spin move and I knocked him on his back and he hit his head and elbow,” Markowski said. “We just all got a kick out of that.”

So how often does Markowski post up against her father in practice? Not very often. Andy has had multiple surgeries, and — in his daughter’s words — "he’s just getting old."

Omaha Central (23-4), who got 16 points from freshman point guard Inia Jones, had both Pal and Lopuyo on the floor at the same time in the fourth quarter to help neutralize Markowski, but the Thunderbolts were able to hang on after a 14-point lead was cut in half with 2:40 to go. The Eagles' 38 points is their lowest point total in a game this season.

Now Pius X turns its attention to Saturday’s state championship final. The Thunderbolts are looking to become the first team to finish unbeaten in Class A since Lincoln Northeast did it in 2005.

The seniors want to finish their legacy the right way, Psota said.

"We didn’t come down here to get second," he said. "We are extremely motivated through the year. This is a new team than we had last year, a lot of new kids off of our bench, and they want them a state title, as well."

Many teams enter the season following a state title with targets on their backs. Not the Hawkettes, apparently.

Britt Prince admits she was "really nervous" to open the tournament earlier this week. Safe to say she's got that under control now.

A look at Friday's consolation games at the girls state basketball tournament.

Class B girls: Stai's crunch-time threes give Norris a shot of confidence, and now a shot at a state title

"We love each other so much so when we feel that confidence from one person, it just spreads like a wildfire to our whole team."

For the second time this school year, Norris has a team playing in a state final. But it goes deeper than that. That and more in our insider.

Taylor McCabe, who finished with 18 points: “I get a lot of recognition, and I don’t think my teammates get enough recognition.”

We breakdown Saturday's championship games, which can be seen on NET.

Lincoln Pius X’s Lexi Zahourek (14) shoots two free throws in place of teammate Jill Aschoff, who went off momentarily to have her leg wrapped by a trainer late in the fourth quarter, during a Class A girls state tournament semifinal game Friday at Pinnacle Bank Arena.

Lincoln Pius X’s Alexis Markowski (50), who had 30 points and 27 rebounds, celebrates as the final seconds tick off the clock against Omaha Central in a Class A girls state tournament semifinal game Friday at Pinnacle Bank Arena.