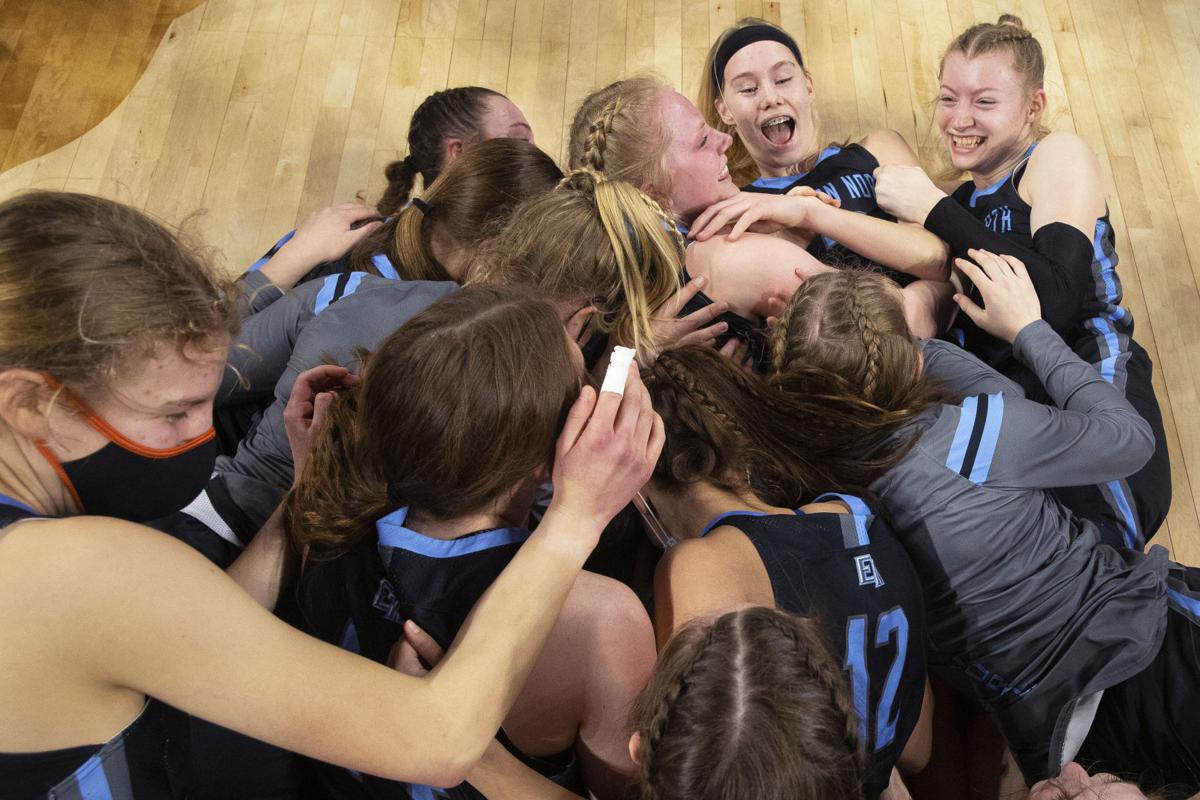 Elkhorn North players pile on each other in a group celebration after defeating Norris for the Class B girls basketball state championship on Saturday at Pinnacle Bank Arena. 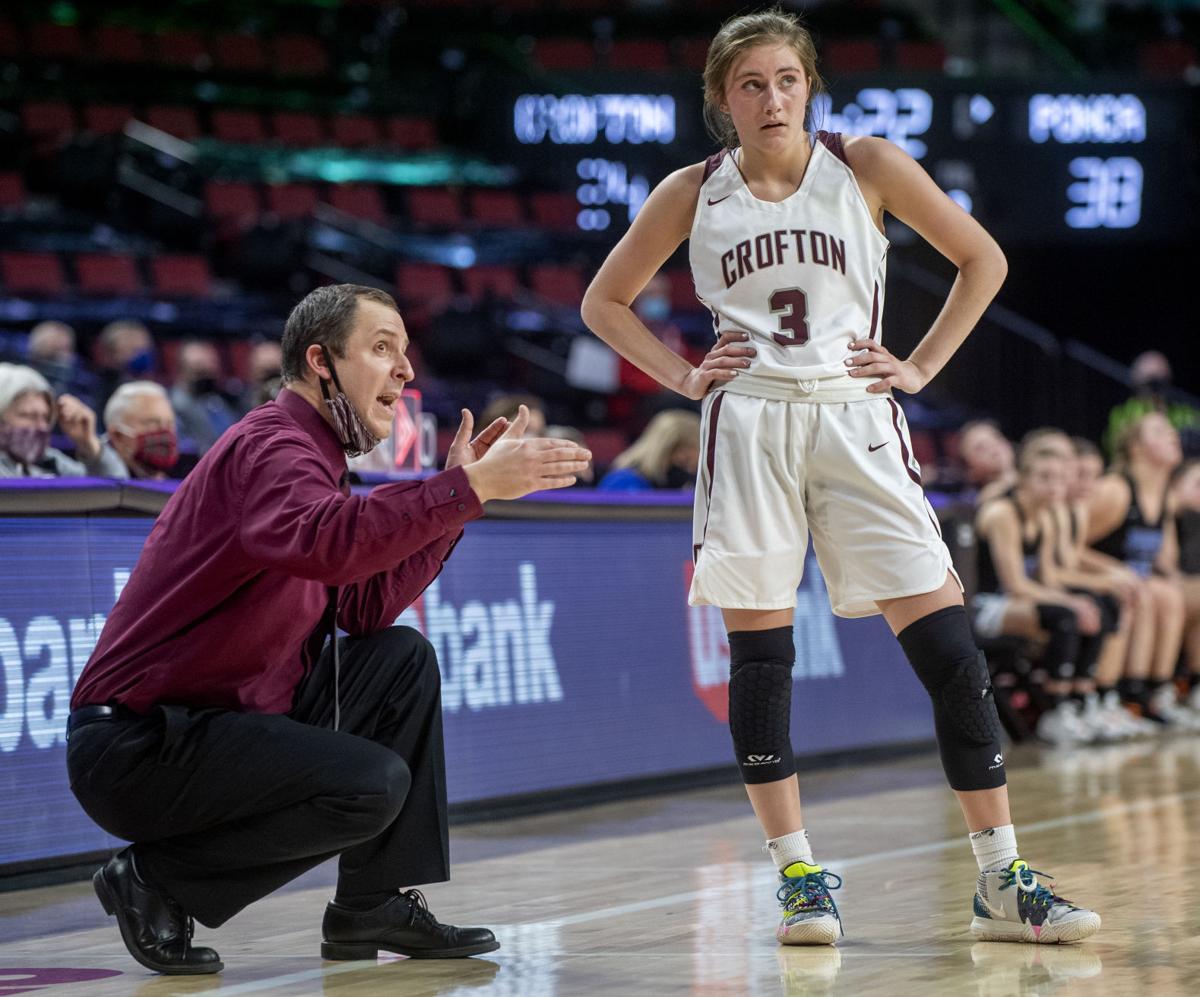 Crofton coach Aaron Losing (left) talks to Alexis Folkers (3) as a Warrior player takes a free throw in the second half against Ponca on Saturday during the Class C-2 state championship final at Pinnacle Bank Arena.

This was to be the year to celebrate all the firsts for the Elkhorn North girls basketball team.

Coach Ann Prince thought she had a talented group of basketball players to be considered among the top five in Class B, but a state title run?

On Saturday, the top-ranked Wolves sealed season No. 1 with an unprecedented first state championship following a 46-33 victory against No. 2 Norris at Pinnacle Bank Arena.

And it's a good thing Elkhorn North didn't hold off on building that trophy case. It has a shiny new gold occupant this week.

"Yeah, we got a spot for that baby," Coach Prince said after Saturday's win.

"I'm just absolutely thrilled with this accomplishment. It's something that you definitely are not expecting in your first year as a school with no seniors."

Usually, first-year programs endure a lot of growing pains with youth and experience. New coach and staff. And not to say Elkhorn North didn't go through that. The roster coming into the season was made of players with, at the most, junior varsity experience at Elkhorn High.

The Wolves also were going to be playing in a class filled with experienced teams, including Norris, Crete, York and Omaha Skutt.

And yet, they defied the odds a bit.

"You knew a state championship would come eventually, but to ask for that, to think that it would happen in the first year, nobody would have guessed it," said Elkhorn North activities director Luke Ford, who was enjoying Saturday afternoon just as much as the Wolves' student body.

It helps having Britt Prince. The freshman point guard, who is receiving Division I scholarship offers, is a dynamic scorer at all three levels, and she runs the offense like a senior.

She had 13 points against Norris, but also added 12 rebounds, six assists and three steals.

A centerpiece player like Britt Prince can bolster a program in a hurry. But the Wolves have a strong core around the star point guard.

Junior Reilly Palmer's experience — she was the only player on the roster with previous state tournament experience — was vital, and sophomore Grace Thompson (team-high 14 points vs. Norris) and sophomore Hannah Nadgwick (11) had a big hand in the Wolves' performance in Lincoln.

"What a great group of girls," Ford said. "The cohesiveness, the unselfishness, it's all about team from the very beginning. It's incredible the way that they have come together that fast."

It was a unique first season for Elkhorn North, which didn't have a student body at any of its games until midway through the season. Instead, the players played the first home games in front of parents and siblings.

It seemed only fitting, to make up for it, to see the Wolves play in front of maybe the most lively student body at the girls state tournament last week. The Elkhorn North students, dubbed the Wolfpack, showed up in full force to be part of school history.

"It meant so much to our girls and to the school and the community," Coach Prince said. "I think ... first year it's cool, trying to make a name for yourself and it just felt like everybody got behind us and showed support and I think our crowd really got our kids going."

There are 650 students at Elkhorn North, and none of them are seniors. You know what that means for the rest of Class B girls basketball.

The entire Wolves basketball team will be back for an encore run.

Coach Prince and her team don't have to worry about that yet.

* Speaking of spectators, it was great to see crowds at the girls state tournament less than a year after the boys played in a mostly empty Pinnacle Bank Arena at the start of the COVID-19 pandemic.

Many teams, however, did play in front of limited fans during the regular season, so state was the first time they got to sense a big-crowd feel.

"An environment where I had to yell and scream," Pius X coach Ryan Psota said after the first round. "It was different than we've been through all season, so that was fun. It kind of felt normal again."

* This state tournament was loaded with great storylines, right?

When does next season begin?

After elevating Southwest into one of the state's top programs, Jeff Rump says timing is right to retire

The accomplished coach reflects on what he will miss most, an "unbelievable" state title run in 2017 and more as he eyes retirement.

North Star is coming off one of its best seasons in program history, finishing 11-10 and making it to the district final.

The postseason honors are beginning to roll in for Alexis Markowski.

Elkhorn North players pile on each other in a group celebration after defeating Norris for the Class B girls basketball state championship on Saturday at Pinnacle Bank Arena.

Crofton coach Aaron Losing (left) talks to Alexis Folkers (3) as a Warrior player takes a free throw in the second half against Ponca on Saturday during the Class C-2 state championship final at Pinnacle Bank Arena.