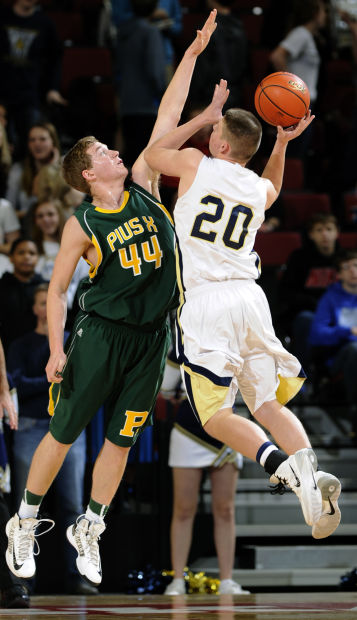 The 6-foot-3 senior guard scored five points in an 11-0 York run late in the third quarter and early in the fourth to spark the No. 2 Dukes to a 41-37 win against the No. 5 Thunderbolts in the first round of the Class B state tournament Thursday at Pinnacle Bank Arena.

Danielson finished with a game-high 14 points, well below the 20.9 he averaged this season. With the Thunderbolts’ Alex Utrup on him most of the time, Danielson had just two points in the first half and was held to 5-of-16 shooting from the field.

“Hands down, that’s the best defense I've played against this season,” Danielson said after the Dukes (23-2) advanced to a 2 p.m. semifinal Friday against No. 3 Beatrice.

“They took away everything I like to do. You could tell they had a week to prepare for us because they shut us down,” he added. “I trusted my teammates and I knew we’d find a way to come out on top.”

Pius X led 30-25 late in the third period after a three-pointer from Noah Appleget (team-high 12 points) and a basket by Brandon Utrup (nine points) accounted for a quick 5-0 run. An Evan Neville three-pointer with 27 seconds left in the quarter cut the deficit to three and started York’s decisive spurt.

Danielson then put York ahead to stay with a three-pointer 10 seconds into the fourth quarter. On the Dukes’ next possession, Danielson drove the lane and kicked the ball to Neville, who buried another three from the left corner. Neville finished with nine points

“I said right before the fourth quarter, ‘There are seven seniors on this team and we don’t want it (the season) to end here. Let’s go out and get this done,’” Danielson said.

Trailing 38-35, Pius X had three opportunities to either cut the deficit or tie, but a Danielson steal, a Pius X turnover and a charging foul ended those possessions. Ryan Dolan then hit both ends of a one-and-one free-throw opportunity to extend York’s lead to 40-35 with 30.7 seconds remaining.

“Outside of our rebounding (a 39-27 advantage for Pius X), we were able to guard them pretty well,” said York coach Scott Lamberty, whose team limited Pius X to 16-of-52 shooting (30 percent). “We knew this would be a tough game. Pius X plays great defense and they’re one of those traditional programs that’s not intimidated playing in the state tournament.”

Both teams struggled shooting free throws. York was 5-of-12 at the stripe and the Thunderbolts were 3-of-9. Pius X (15-8) hit just 3 of 15 shots from the field in the final eight minutes.

“Free throws hurt us, and we missed a lot of shots inside 3 feet,” said Pius X coach Ray Forycki, whose team wiped out a 13-6 deficit early in the second quarter to lead 17-15 at halftime.

Thursday's prep boys basketball action between Lincoln Pius X and York in the first round of the Class B state tournament at Pinnacle Bank Arena.

Schedule and results for the Nebraska boys state basketball tournaments.

Prep Extra's home for all your coverage of the Nebraska high school state boys basketball tournament. Photos, coverage and more from all six classes.