In unfamiliar spot, Southwest's Smith answers the challenge to lead Silver Hawks past North Star
0 comments
Share this
{{featured_button_text}}
1 of 2 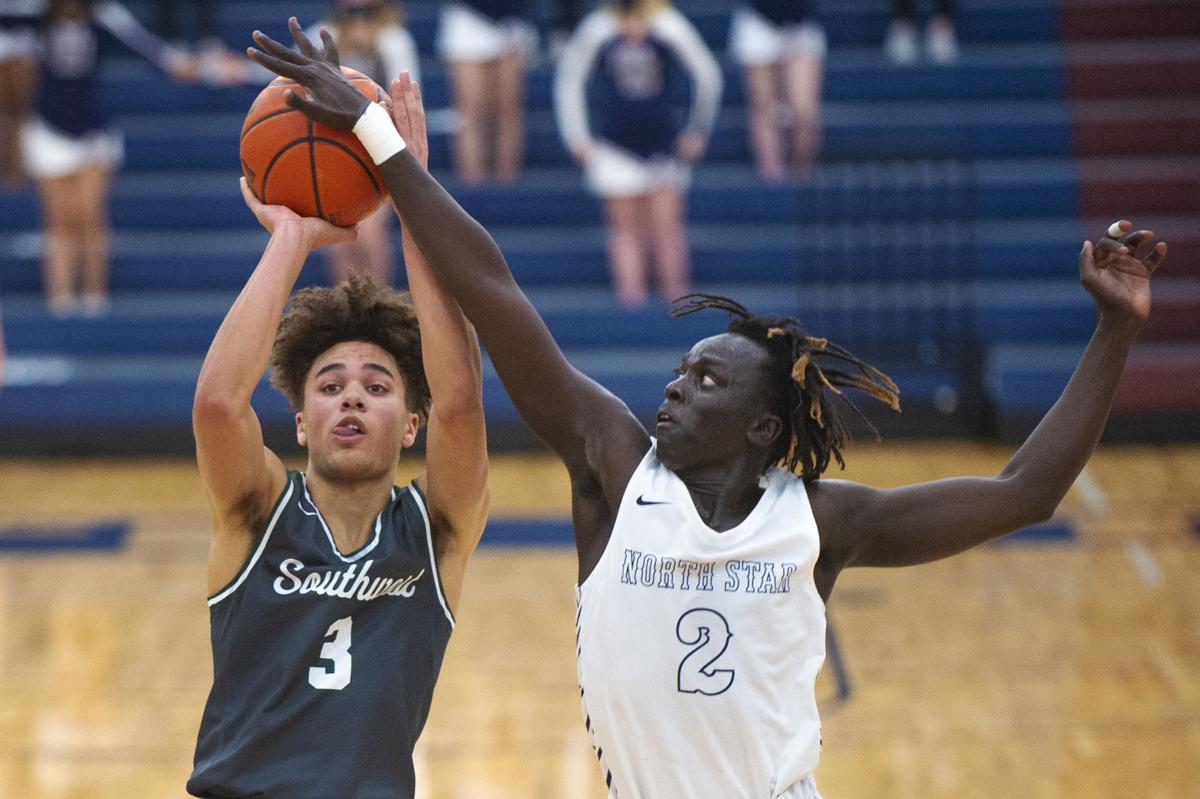 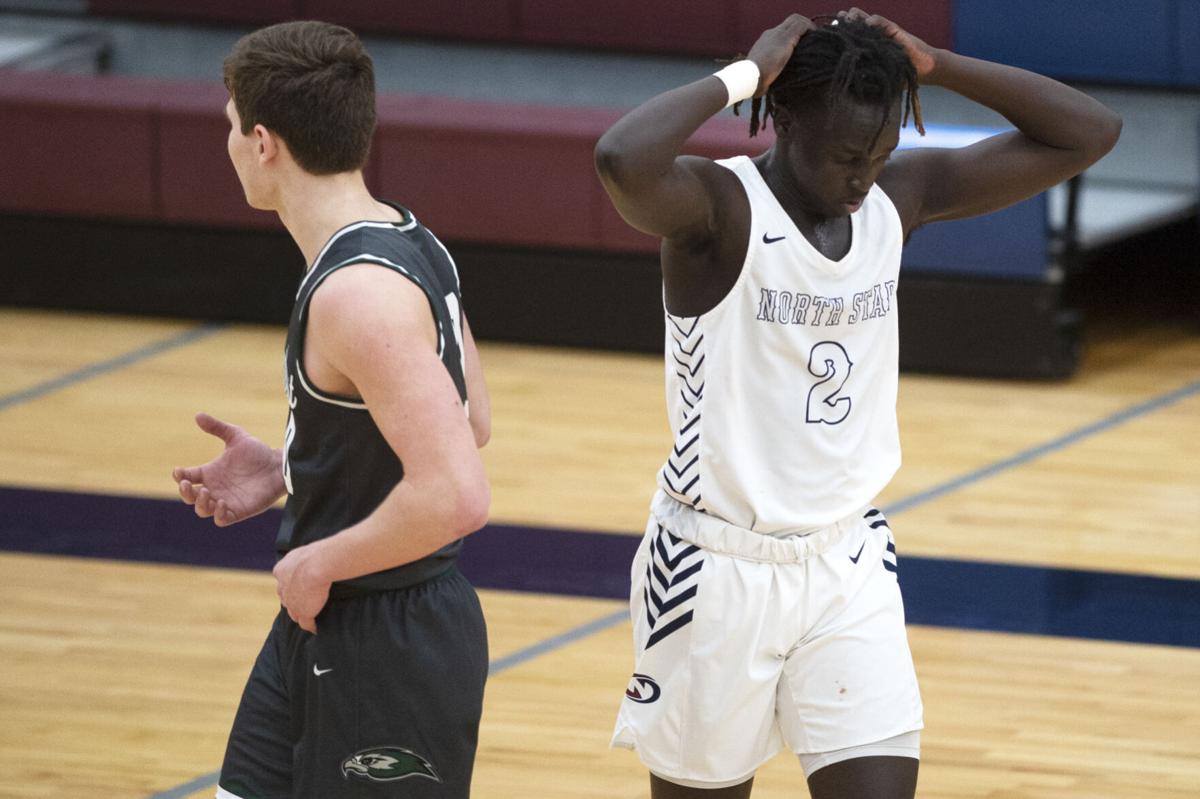 Lincoln North Star's Kwat Abdelkarim (right) walks off the floor after being called for a foul against Lincoln Southwest's Rylan Smith (not pictured), resulting in three free throws in the final seconds of the game Friday at North Star.

Rylan Smith admitted he’d never been in a situation like that before — at the free-throw line with three foul shots in a tied game with 9.1 seconds to go.

The Lincoln Southwest sophomore guard handled it like an experienced pro.

Smith hit nothing but net on all three free throws before teammate Myles Hoehne knocked down both ends of a 1-and-1 with 2.8 seconds remaining to close out the Silver Hawks’ 53-48 boys basketball road victory at Lincoln North Star on Friday night.

Smith, who scored 18 of his team-high 20 points in the second half, was fouled on a three-point attempt from the right wing after the Silver Hawks (4-7) were able to run 1 minute, 39 seconds off the clock to go for the final shot.

North Star called timeout just as Smith stepped to the line, giving him even more time to think about the gravity of the moment.

“I tried to keep everything out of my head and just focus on what Coach (Alex Bahe) was saying during the timeout,” said Smith, who missed four games with a calf injury he suffered during the Heartland Athletic Conference Tournament and still limps from the injury.

“My teammates had full confidence in me, and that helped me step up and hit them (the free throws).”

No one led by more than two points in the back-and-forth fourth quarter until Southwest’s five free throws at the end.

Ben Hunzeker, a 6-foot-3 junior who missed games earlier in the season with a knee injury, gave Southwest a 48-46 advantage when he nailed a 10-foot jumper with 2:03 remaining, part of his 15 points.

The Navigators (7-5), however, answered right back when senior guard Kwat Abdelkarim drove and sank an 8-foot pullup jumper with 1:48 remaining to tie it. The 6-3 Abdelkarim netted 18 of his game-high 24 points in the second half, including 12 in the third quarter when the Gators turned a 21-16 halftime deficit into a 36-35 lead heading into the final eight minutes.

Both teams struggled offensively in the first half, combining to shoot 15-of-51 from the field.

On the Southwest possession after the Abdelkarim basket, the Silver Hawks at first were looking to score quickly, only to have the North Star defense turn them away. Finally with 1:15 left, the Hawks pulled the ball out when the North Star defenders backed off and went for the final shot.

“Rylan probably shot that three a little earlier than we wanted, but he got fouled and then made all three free throws without hitting the rim,” Bahe said. “I was really proud of how our guys closed this game out. This is huge for us in terms of confidence going forward.”

North Star hit 15 of 21 shots from the field in the second half to finish shooting 50% from the floor (22-of-44). The Gators, however, had five turnovers in the final period, and coach Tony Quattrocchi thought those miscues were probably the difference in the game.

“We had two crucial turnovers there that gave Southwest opportunities and they took advantage,” said Quattrocchi, whose team hosts No. 1 Millard North on Saturday (2:45 p.m. tipoff).

“Give Southwest a lot of credit, they’ve had to deal with a lot injuries and they came out and played a great game tonight,” the North Star coach added. “You have to really compliment Rylan Smith. In the second half, he came out and made big play after big play.”

Prep Extra Credit, 1/20: A look at some notable performances from around the state

A coaching milestone and a buzzer-beater lead off this week's notable performances.

In showcase of standout guards, North Star's Brown proves the difference in win over Spartans

Club basketball teammates Kwat Abdelkarim and Carter Glenn squared off, both went for 20-plus, and the Gators prevailed on their home court.

The high school boys basketball season rolls on. Ron Powell takes a look at each class in his latest ratings.

With gyms no longer packed because of pandemic, high schools are upping their livestream game

With the restrictions of spectators came innovation. What goes into a game streaming live online? Here's a detailed look at the process.

After falling to Class A No. 2 Bellevue West the night before, No. 1 Mustangs played with " a lot of emotion" in a commanding 40-point win.

Lincoln North Star's Kwat Abdelkarim (right) walks off the floor after being called for a foul against Lincoln Southwest's Rylan Smith (not pictured), resulting in three free throws in the final seconds of the game Friday at North Star.