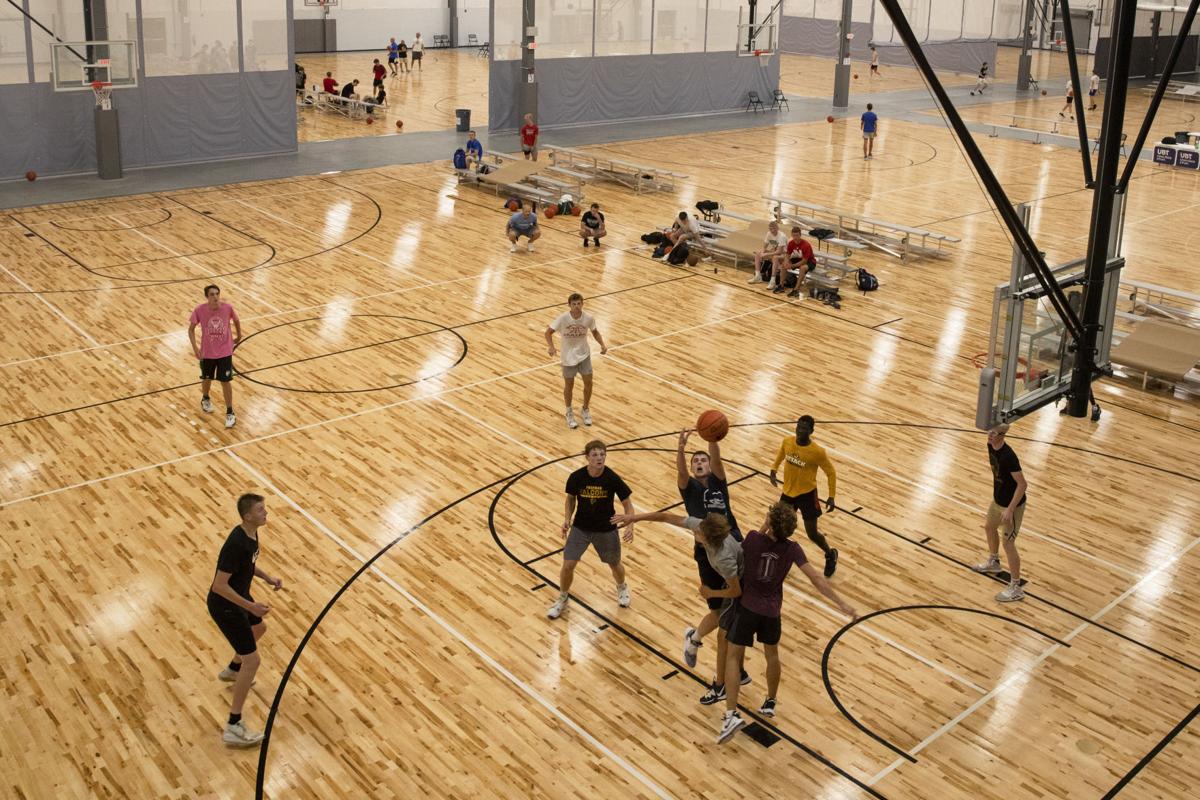 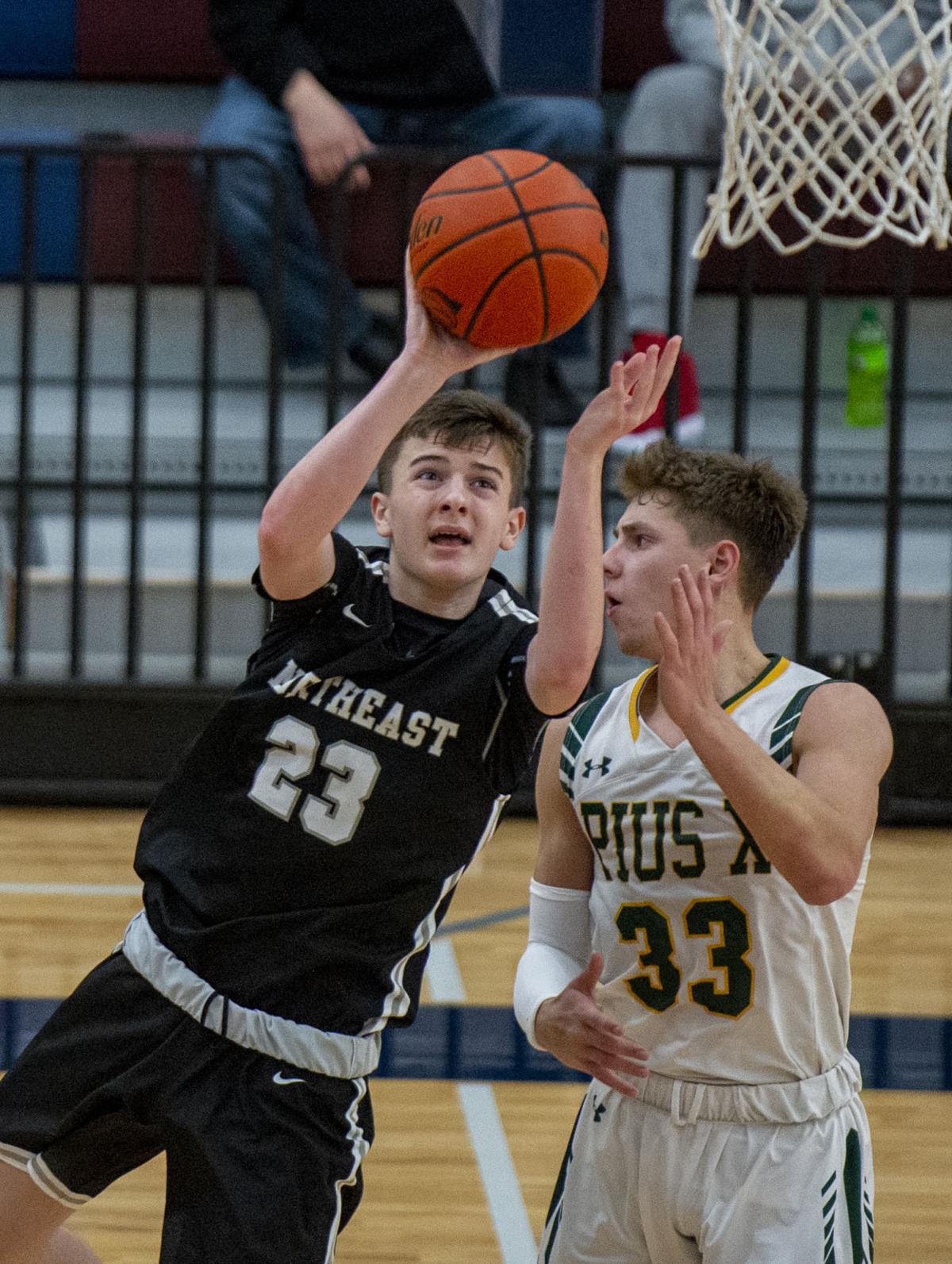 Lincoln Northeast's Pierce Bazil (23) attempts a shot during a game against Lincoln Pius X on Dec. 28 at Lincoln North Star. As a member of the Lincoln Supreme AAU team this summer amid a pandemic, Bazil has had to rely on his AAU coach to market him to college coaches.

Matt Cumro is a busy man. So when the pandemic forced a mid-March pause, he found solace in taking his 4-year-old for some father-son time at the Kinetic Sports Complex.

Cumro, founder of AAU basketball program Lincoln Supreme, also enjoyed this past weekend, when more than 100 teams converged on the sleek $11 million facility, which boasts eight basketball courts that convert into 12 volleyball courts and a spacious athletic facility. The complex, opened in March, was forced to sit empty (well, mostly) for several weeks due to coronavirus concerns.

"It's great to see kids in there, first and foremost," Cumro said. "To see other people enjoy it has been really, really nice. We've gotten a lot of positive feedback."

Even with 90,000 square feet to spare, hosting several hundred people at an event in the current health climate is no easy task. In fact, it's a difficult one. Lincoln Supreme officials and city health agencies continue to work in tandem to present the safest environment for players, coaches and fans, a complementary partnership that shares a common goal of prioritizing the safety of all people involved.

Cumro and company have rolled out the usual bullet points one has come to expect when attending a gathering or event: social distancing, hand sanitizer, recommended masks — and plenty more.

Breaking the ice is likely the most daunting obstacle, and Cumro says he learned a lot from the program's first hosted tournament.

"It was a learning experience this past weekend with different things from scoreboards to traffic flow, and things of that nature but we'll grow into that," he said. "But, again, it's good to just have people in the building and have some sense of normalcy right now."

In March, Cumro turned to Waverly head boys basketball coach Ryan Reeder to aid in the process of marketing Supreme players to college coaches, one of the summer circuit's main appeals. AAU events are more commonly targeted by college recruiters who don't necessarily have the time to pop in at high school games while leading their own teams during the winter.

Turns out, Reeder had his work cut out for him.

Reeder has devoted his time into facilitating connections for Supreme players, such as Isaac Traudt (Grand Island), Cale Jacobsen (Ashland-Greenwood), Kwat Abdelkarim (North Star) and Pierce Bazil (Northeast). The in-person recruiting model has tilted on its axis in the face of a pandemic, forcing a need for creativity.

Reeder has taken the reins in bridging the gap from player to coach through virtual avenues.

"We're filming our games on an iPad, download them, then I send it off to coaches every Monday morning," Reeder says.

Coaches are noticing. Holding several Power Five offers, including Nebraska, Traudt is one of the most coveted 2022 prospects in the state. Jacobsen, a junior-to-be, has teams such as Omaha, San Jose State, South Dakota and North Dakota State hot on his heels.

But you can't record games that aren't happening. Reeder says the launch of an AAU season this summer is a critical advantage for all college hopefuls. The ability to make live games and tournaments a reality is particularly rewarding for players such as Abdelkarim, a shifty 6-foot-3 guard who turned in a breakout year last season, where he averaged 17.3 points per game and racked up 26-plus points four times in December.

A busy day on the phone for Grand Island's Traudt includes offers from Nebraska, Creighton

"He (Abdelkarim) is an unknown stud on our team, and Pierce Bazil is another example," Reeder said. "Those guys needed to prove themselves on the AAU circuit and show that they can guard elite basketball players at a high level."

Reeder recalled last Monday, a day he had anticipated might bring rest following a trip to Ames, Iowa, for the Jammin’ In July showcase. But his team played well, meaning there were plenty of plays to pick from in producing a highlight package.

"I can't emphasize enough what a great job Ryan has done with all of that, organizing, communicating and getting film out to coaches," Cumro said.

The Lincoln Supreme regional teams will travel to Kansas City, Missouri, this weekend for the Hardwood Classic, where they will see two of the top AAU teams in the Midwest: Buddy Buckets (founded by current NBA player Buddy Hield) and MOKAN Elite.

Bill Self, Shaka Smart and other high-profile Power Five coaches might not be there this time, but you can bet they'll see a familiar name on their phone screen Monday morning.

"Sometimes I don't know if I annoy coaches; I just know we have great players in our program so I just want to push it onto them," Reeder said.

Brennon Clemmons Jr. suffered a cruel 1-2 punch during a key part in his growth as a hoops player, but he's back and ready to help the Gators.

Lincoln Southeast senior-to-be Ajantae Hoganan has been sidelined for the first two weeks of high school summer league play, but is anxious to play in the remaining July games.

Lincoln Pius X is included in the field, which also has the two teams that battled for a Class A crown last season.

The 6-foot-6 senior earned Super-State second-team honors after helping lead the Thunderbirds to a Class A state championship in March.

As Isaac Traudt reeled off his team's first 11 points Monday night, something caught his coach's eye. He went on to score 57 points.

Nebraska Supreme is ranked 16th in the country after about five months as a joint venture between Lincoln Supreme and Team Factory in Omaha.

Lincoln Northeast's Pierce Bazil (23) attempts a shot during a game against Lincoln Pius X on Dec. 28 at Lincoln North Star. As a member of the Lincoln Supreme AAU team this summer amid a pandemic, Bazil has had to rely on his AAU coach to market him to college coaches.