Subscribe
Read Today's E-Edition
Share This
Griesel, a Lincoln East grad, excited about chance to mold his game with U20 German National Team
0 Comments
Share this
1 of 2 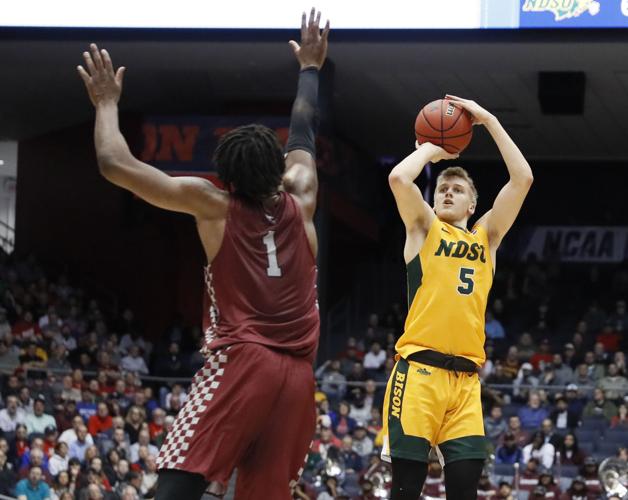 North Dakota State's Sam Griesel (5) shoots during the opening round of the NCAA Tournament in March 2019. 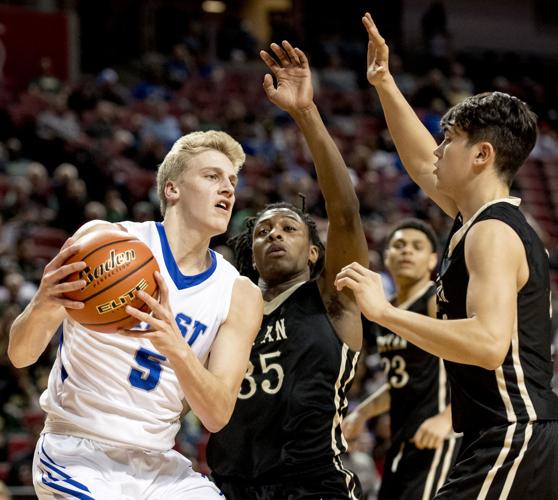 Sam Griesel (5) looks for room in a state tournament game between Lincoln East and Omaha Bryan in 2018. Griesel, who now plays for North Dakota State, hopes to build his game with the U20 German National Team.

The NCAA Tournament was sort of an out-of-world experience for Sam Griesel, who grew up dreaming about playing in it.

On Tuesday, Griesel will board a plane for Frankfurt, Germany. His grandparents live about two hours from there.

But this is a basketball trip. Griesel, a Lincoln East graduate, has been invited to try out for the U20 German National Team. Eighteen players will try out, and because the team is spending money to fly Griesel to Germany, he has a great shot at making the 14-player roster when the summer slate of tournaments begin.

"It's kind of weird to think about that this time next week I'll be in Germany playing, because everything happened so fast," said Griesel, who was selected late last month. "I'm really excited, and my grandparents live over there, so I can stay with them for a few days, which is nice."

Griesel's father, Achim Griesel, was born and raised in Germany before moving to the United States when he was 25.

The 6-foot-6 Griesel, who just finished his freshman season at North Dakota State, said the chance to play for Germany started more than a year ago during his recruiting process. He was told getting a German passport would create an opportunity to play overseas while in college.

Thomas Viglianco, who helped train Griesel in Lincoln, was helpful in getting the ball rolling, and communication reached the German National Team coaches.

"They watched me play and it kind of went from there," Griesel said.

Griesel, who was a Super-Stater at Lincoln East, will be playing overseas for about six weeks. The team will play tournaments in Italy, Spain and Israel.

The chance to play overseas will open Griesel to a different style of basketball.

"That's one of the things that I'm really excited about, just kind of adopting the European kind of way of basketball into my game," said Griesel, who wants to add more range to his game. "I'm just excited to hear from some of those coaches and other players and get their perspectives on everything and just learning a lot."

The European game also includes an expanded three-point line, which the NCAA men will be adopting next season.

"I think that will help my game a lot," Griesel added. "The European style is a lot more slower pace, but it's a lot more skill-based, which is part of my game that I think will really develop over there and in the years to come."

The chance to play for the U20 German National Team continues a fast and fun ride for Griesel, who signed with North Dakota State last year, started as a freshman and played in the NCAA Tournament.

The Bison beat North Carolina Central in the NCAA play-in game before losing to Duke in the next round. Griesel recalls seeing Jim Nantz, Bill Raftery and Grant Hill calling the game.

Duke, the top seed in that regional, won by 23 points, but the experience was one Griesel will not forget. The taste of a couple NCAA Tournament games has the Bison thinking bigger.

"That's our primary source of motivation right now, because we want to get back, we want to make the run," Griesel said. "We want to be that Cinderella team this year and have as much success as we did last year, and more."

The past week has been a bit crazy for Sam Griesel and his North Dakota State teammates. Griesel is expected to start when NDSU plays North Central at 5:40 p.m. on TruTV.

It's been a wild and busy June for Lök Wur.

Who can afford to buy the Phoenix Suns?

Who can afford to buy the Phoenix Suns?

North Dakota State's Sam Griesel (5) shoots during the opening round of the NCAA Tournament in March 2019.

Sam Griesel (5) looks for room in a state tournament game between Lincoln East and Omaha Bryan in 2018. Griesel, who now plays for North Dakota State, hopes to build his game with the U20 German National Team.