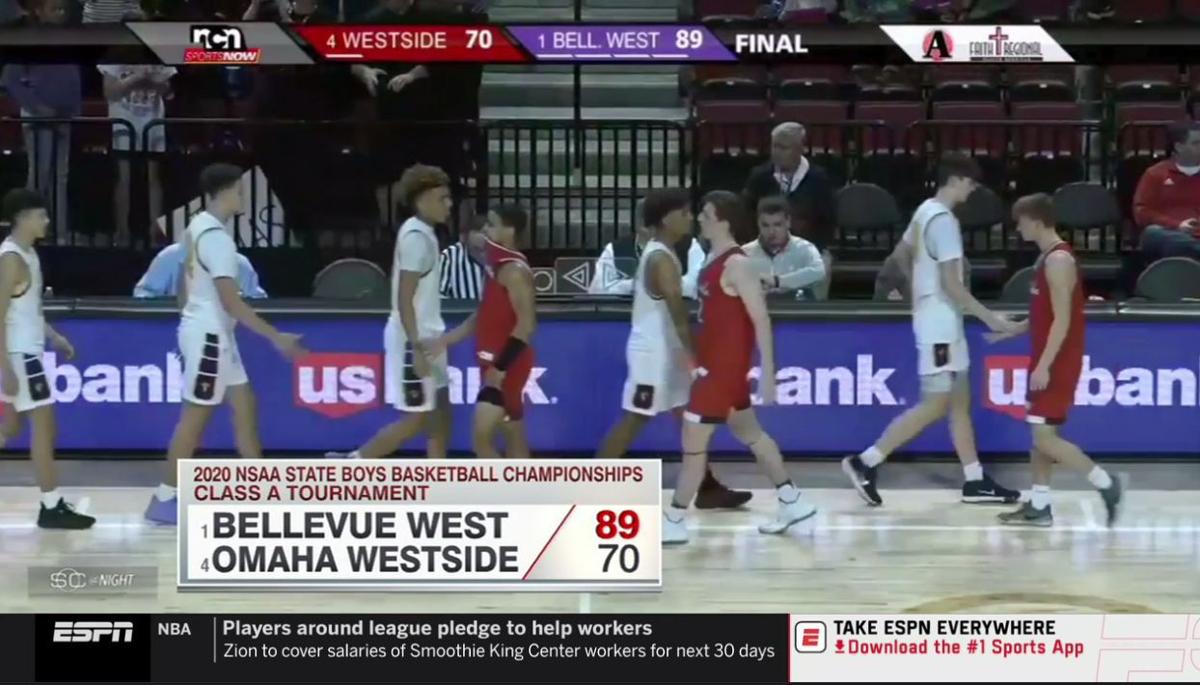 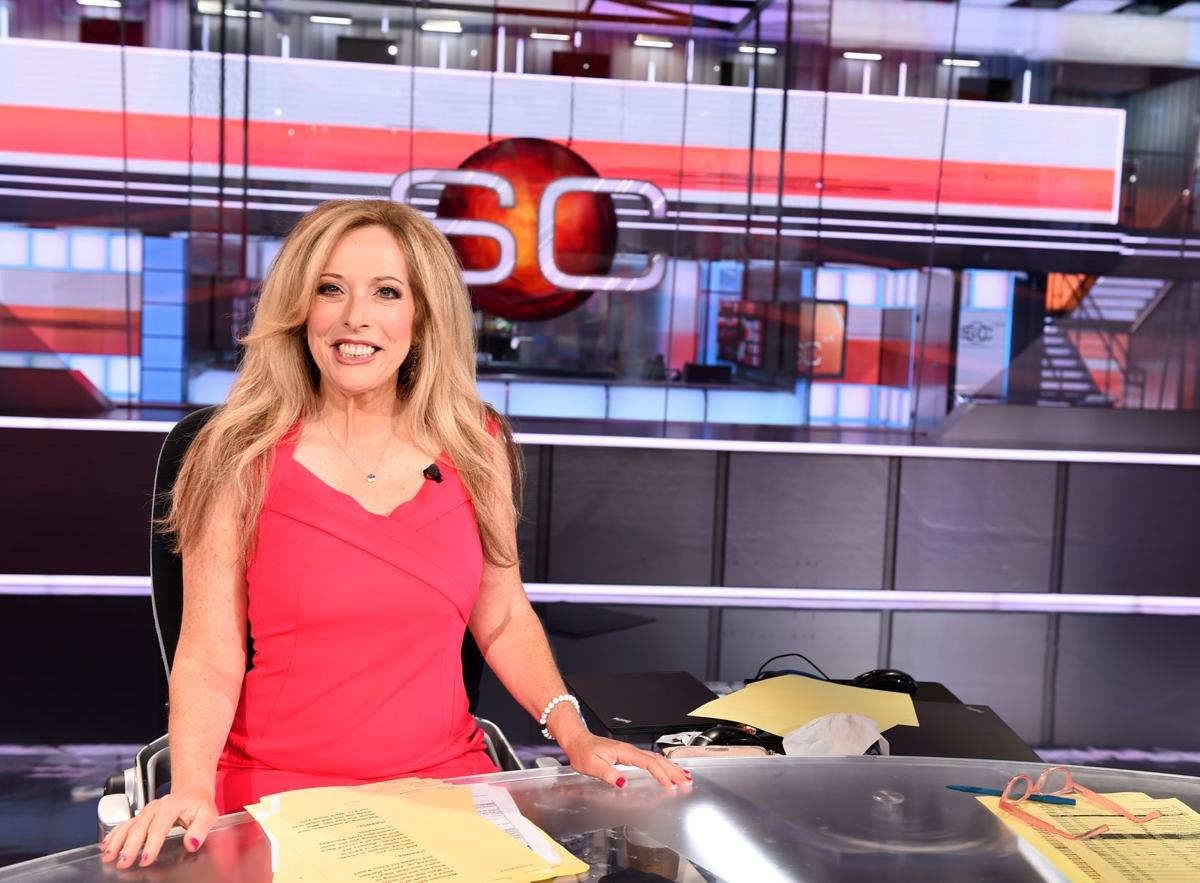 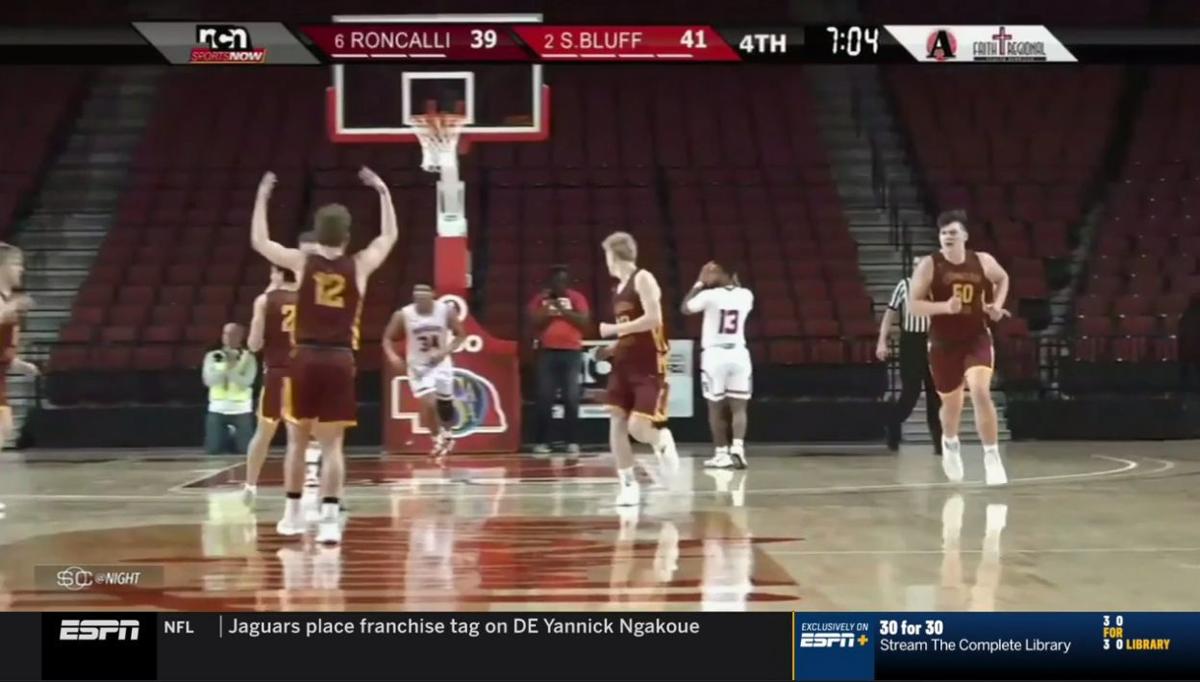 Highlights from the Nebraska boys state basketball tournament game between Omaha Roncalli and Scottsbluff were on ESPN’s “SportsCenter” on March 13. Omaha Roncalli won the semifinal game 68-55.

One after another, the sports world shut down last week. The NBA, college basketball, the NHL and almost every professional and college sport.

But in Nebraska, the high school boys state basketball tournament played on, albeit without the normally large crowds, because attending the games was limited to immediate family, some event staff and media.

The threat of the coronavirus was growing nationally, but local health and city officials in Lincoln determined that it was OK for the games to go on as scheduled with some changes.

The scene: With most sports on hold, Nebraska state basketball tournament gets its 'SportsCenter' moment

The word surreal can be overused in sports at times. But that wasn’t the case this week during the Nebraska boys state basketball tournament.

And for a full-time TV sports network like ESPN, the games are what they need, and that allowed a few teams from Nebraska to get a seat at the table on “SportsCenter.”

So when people turned on ESPN late that Friday — and the network says the average viewership is about 330,000 for midnight "SportsCenter" — they watched high school basketball highlights from Nebraska narrated by the familiar voice of “SportsCenter” anchor Linda Cohn.

Cohn has served as a “SportsCenter” anchor since joining ESPN in 1992. She is ESPN’s longest-tenured "SportsCenter" anchor and in 2016 was recognized for anchoring her 5,000th "SportsCenter," the most of any anchor in ESPN history.

During a recent interview, Cohn shared how Nebraska made it on the show, and why she approached her work the same way she always does. When doing a highlight for the Omaha Roncalli-Scottsbluff semifinal game Cohn even said, “Dotzler, turnaround J." And that’s something Jack Dotzler, and the other players for Omaha Roncalli, will always remember.

It was earlier that day when Cohn first learned from producer Greg Fonseca that they were playing high school games in Nebraska, and that it might make it on the show that evening. Fewer than 10 states were still having high school state tournaments.

“I remember what he said, he goes, ‘You know what, this is available, and it would be great to get some kind of highlights in the show.’” Cohn said. “And I go, ‘Great.’”

ESPN was able to show the highlights because News Channel Nebraska broadcast the games, and the National Federation of High School Sports' NFHS Network distributed the broadcast on the internet for free.

High school sports have made it on “SportsCenter” before, such as the top 10 plays of the night, a special story, or when LeBron James was dominating in Ohio.

“Third quarter, Bellevue West, (Chucky) Hepburn draining a three,” said Cohn on ESPN. “I think this is going to start a trend, which is fine. … Bellevue West would go on to win 89 to 70.”

After the highlights they even had the regular graphic box with the final score flashed on the screen.

Cohn has done high school sports on the show, but rarely that in-depth.

“I've been there since 1992 and I can count on one hand the number of times I’ve done a full highlight of a high school state tournament,” Cohn said. “It is rare, for obvious reasons. But it was cool.”

Her biggest concern was correctly pronouncing the player's names. Just like normal, Cohn got a shot sheet, which lists what play is next on the video.

“We were all just winging it,” Cohn said. “I was working with Stan Verrett. And we just wing it sometimes and we just pray and hope that for the parent’s sake that we didn’t screw up the pronunciation of the kids’ names.”

Dotzler, a senior at Omaha Roncalli, said it was awesome to see himself, and hear his name, on the show.

“Growing up I used to watch 'SportsCenter' in the morning before going to school when I was getting ready,” Dotzler said.

Cohn has an appreciation for what it must mean for a player, or fans, to hear about their team on the show.

“I always say no matter what highlight I do, I basically treat it like the Super Bowl, or the NBA championship,” Cohn said. “You bring the ‘A’ game.

“When I broke in there weren’t a lot of women, if at all, especially someone like me doing 'SportsCenter' so I always had to imagine someone watching me for the very first time. That’s just an automatic strategy I use. When I sit in that “SportsCenter” chair it doesn’t matter what school, what team, what league. I’m always giving it my all."

ESPN anchors also cover breaking news stories and interview players and coaches, but Cohn has always felt like doing highlights has been her strength.

“That’s why there was no way I was going to shortchange what was a very important time and moment,” said Cohn of last week’s show. “And who knows, maybe it’s a once-in-a-lifetime thing to be on 'SportsCenter.' That’s why I just try to give it my all, like I was doing the Rockets and Lakers.”

The next night highlights from the Class A championship game, when Bellevue West rallied from a 14-point deficit to beat Millard North, also got about 20 seconds on the show.

Cohn works on “SportsCenter” Los Angeles, and hasn’t been doing much on-air work in the past week, with most of the programming coming out of the Bristol, Connecticut, studio.

The health crisis in the U.S. is much bigger than sports. But for Cohn one of the things she feels the most sadness for is the NHL. Cohn is a hockey player. As a senior at Newfield (New York) High School, she served as the goalie on the boy’s ice hockey team, and in college on the Oswego women’s ice hockey team.

For ESPN she is the primary host of “In the Crease,” a nightly hockey program on ESPN+ during the NHL season.

“I know how passionate the NHL fan is because I’m one of them,” Cohn said. “And so I feel most sad about hockey fans, because March is a time of year where I always called it their March Madness, because of the crazy races for the playoff berths. It’s ridiculous. And then once the postseason starts it’s the best postseason in sports, the Stanley Cup playoffs.”

The scene: As the world around them changes, players and coaches get their time on the court at state

As the world changes around them, the state tournament has offered players and coaches alike the chance to focus simply on basketball, for at least 1 ½ hours at a time.

The scene: Players miss playing in front of big crowds at state tournament, but happy to get the opportunity to play

Due to coronavirus risks, there was a different kind of feel around Pinnacle Bank Arena to open the boys state basketball tournament.

Like the rest of college basketball, the coronavirus pandemic has disrupted Donovan Williams’ recruiting process.

There will be no Sweet 16 this year without an NCAA men’s basketball tournament.

'That would have crushed us:' 6 teams go from wondering if there'd be games to cutting down nets

Though seen by fewer people, life-long memories were made at the state tournament, one of few sporting events across the country.

Ron Powell: A slice of normalcy provided by Weeks and Goltz at a very different boys state tournament

With the coronavirus pandemic overshadowing everything, the new normal for the boys state basketball tournament this weekend were sparse crowd…

The Wisconsin commit averaged 17.3 points, 4.6 rebounds, 6.5 assists and 3.1 steals for the Class A champion Thunderbirds.

Two years ago, Hunter Sallis was a skinny 6-foot freshman who averaged 12 minutes and 4.3 points per game. Oh, how times have changed.

The former Journal Star boys coach of the year will lead the Cardinals after four seasons with Norfolk, which won a state title in 2017.

When many sports in the U.S. were on hold, the boys state basketball tournament played on, leading to Nebraska getting a long run on “SportsCe…

Highlights from the Nebraska boys state basketball tournament game between Omaha Roncalli and Scottsbluff were on ESPN’s “SportsCenter” on March 13. Omaha Roncalli won the semifinal game 68-55.