The high school boys basketball season is heating up, and Ron Powell examines each class ahead of another key week.

Comments: Grand Island is out after losses to Lincoln East and Millard West, which is back in the top 10 after a one-week hiatus caused by a setback to Omaha North on Jan. 9. Southeast also moves to contender status after falling at Omaha Benson.

Comments: The top eight went according to form, but last week’s No. 9, Aurora, is demoted to contender status for a loss to Elkhorn North. The River Cities Conference Tournament this week could potentially shake things up with Mount Michael, Skutt and Roncalli in the field. Waverly faces a tough week with road games at C-1 No. 5 Wahoo and B No. 8 Platteview on back-to-back nights.

Comments: The top 10 went undefeated last week so there are no changes. Wayne is a strong contender at 13-2, the only losses coming to No. 1 Auburn and No. 5 Wahoo.

Comments: Doniphan-Trumbull tumbles out of the top 10 after a loss to Gibbon, which allows Bridgeport to reenter.

Comments: North Platte St. Patrick’s is punished slightly for its loss to D-2 No. 3 Mullen. McCool Junction drops to contender status after falling to Deshler, and Southern Valley does the same after a setback to C-2 ratings contender Chase County. Creighton, one of the two new top-10 members this week, is led by 6-foot-1 sophomore guard John Mitchell, who averages 33.6 points per game. Howells-Dodge has won eight straight, including the triumph that ended BRLD’s 55-game winning streak.

Comments: Parkview’s run to the MUDECAS A division title earns the Patriots the No. 1 spot. Diller-Odell’s first-round MUDECAS win over previous No. 1 Falls City Sacred Heart accounts for the other changes.

A look at Monday's results from the prep hardwood.

Clark Grell takes a look at the latest ratings as we enter a busy week of top-10 matchups.

Norris was able to get some payback for a state tournament loss to Crete in March.

Highlights from the final round of the MUDECAS tournament Saturday in Beatrice.

Most teams play a zone defense against the Mustangs. When the Rockets opted for man-to-man, Hunter Sallis says, "I knew I had to be aggressive."

Following 'heart-to-heart' talk, Beatrice boys turning things around on both ends of the court

The Orangemen had a meeting about their shaky defense — and responded in a big way.

A look at Monday's high school sports action from around the area.

Rounding up the stats from Monday's action on the prep girls basketball hardwood.

Rounding up the stats from Monday's action on the prep boys basketball hardwood.

A look at Tuesday's high school sports action from around the area.

Sam Haire came off the bench and nailed a game-winning three-pointer with 2 seconds left. Ajantae Hogan reached 1,000 points. And, the Knights won.

Rounding up the stats from Tuesday's action on the prep boys basketball hardwood.

Prep Extra Credit, 1/20: A look at some notable performances from around the state

A coaching milestone and a buzzer-beater lead off this week's notable performances.

Touting a 21-point average, the 6-foot-4 senior guard was the facilitator Thursday night at Ed Johnson Gym in a 62-46 win over Lincoln Southwest.

Down by double-digits in the third quarter, Ryan Reeder looked at his boys basketball team. "Everyone was just calm." The coolness led to a hot finish.

Class A No. 5 Pius X flexes above the rim in commanding win over Norfolk

Cruising to a comfortable lead, the Bolts showed off their dunking skills. Who had the best jam? “I hate to say it, but maybe mine."

The high school boys basketball season rolls on. Ron Powell takes a look at each class in his latest ratings. 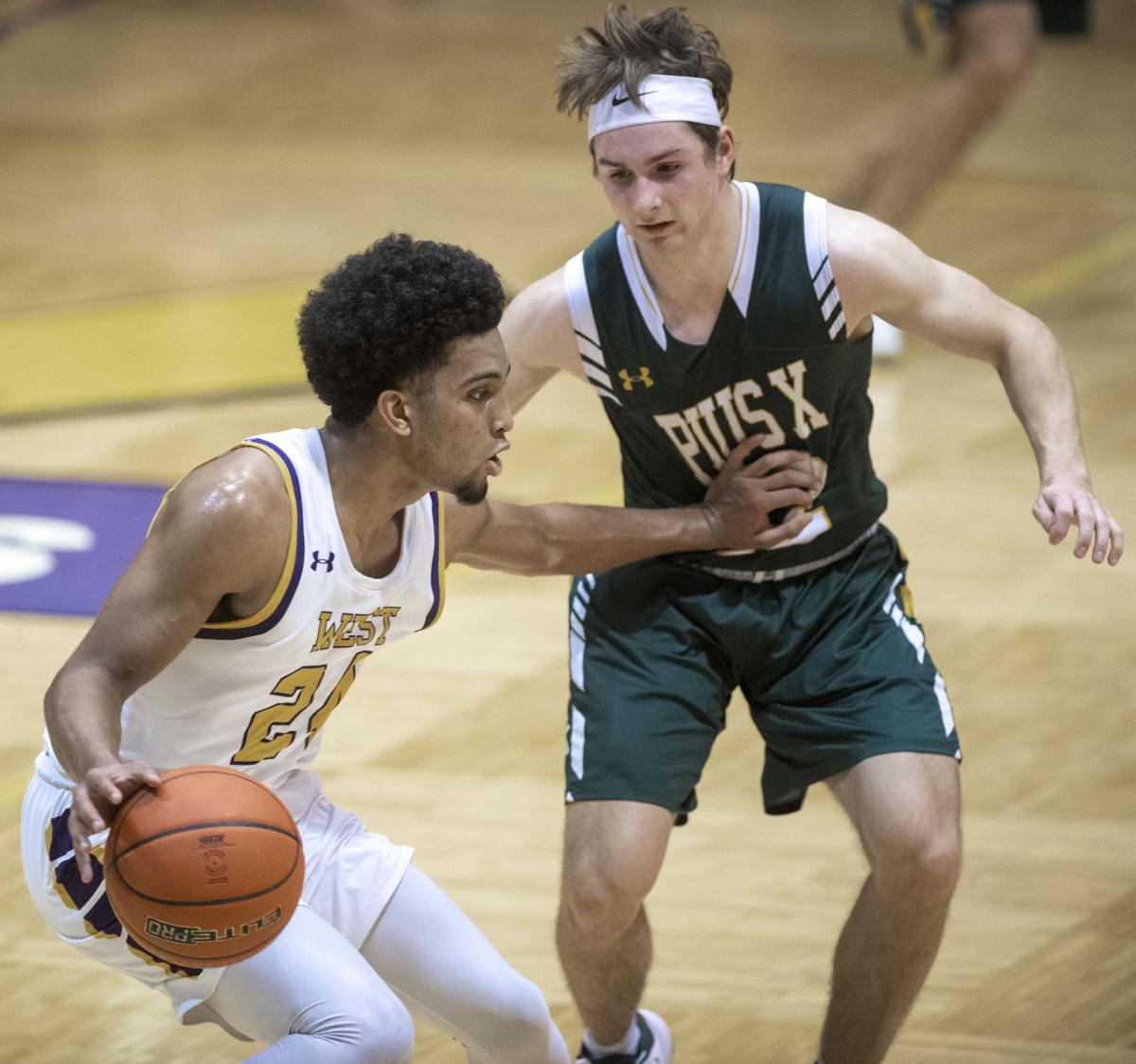 Bellevue West's Chucky Hepburn (left) drives the ball up the court against Lincoln Pius X's Charlie Hoiberg in the second half last Tuesday at Bellevue West.