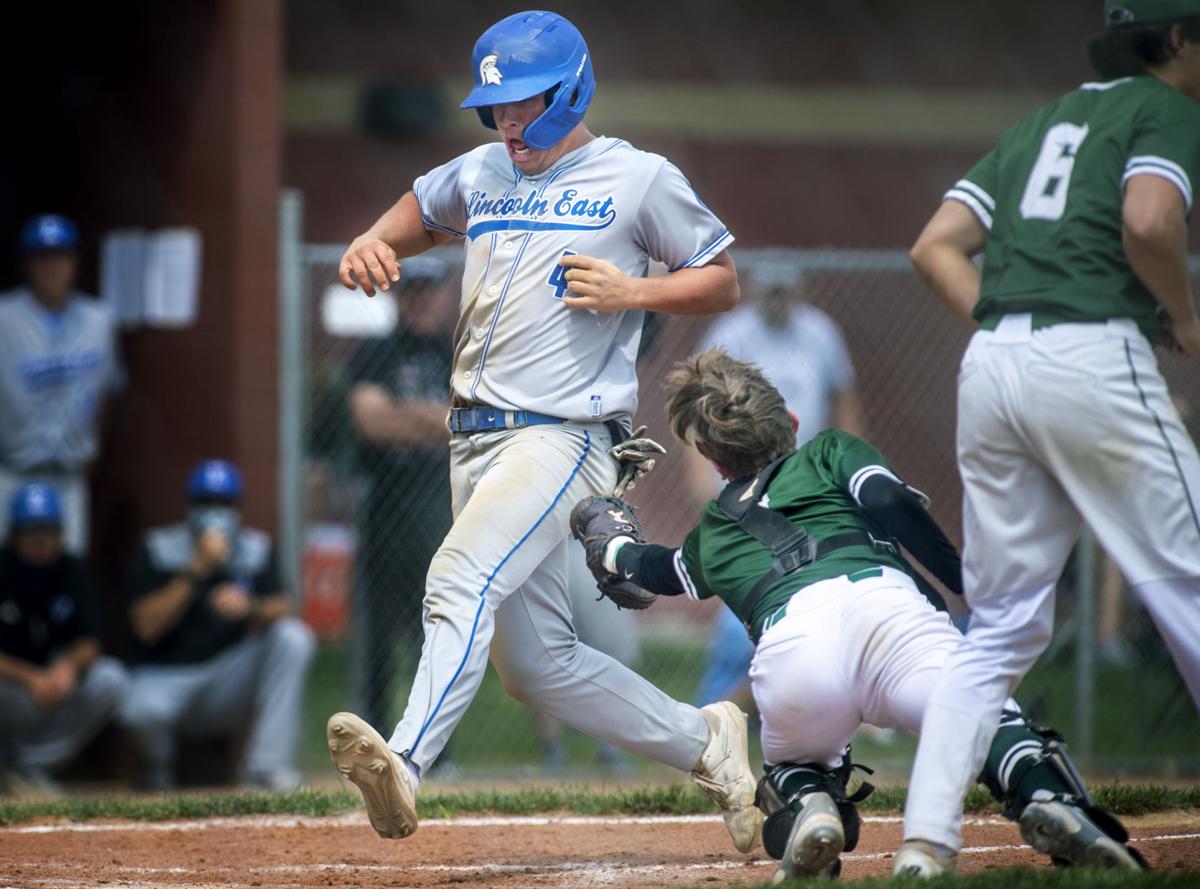 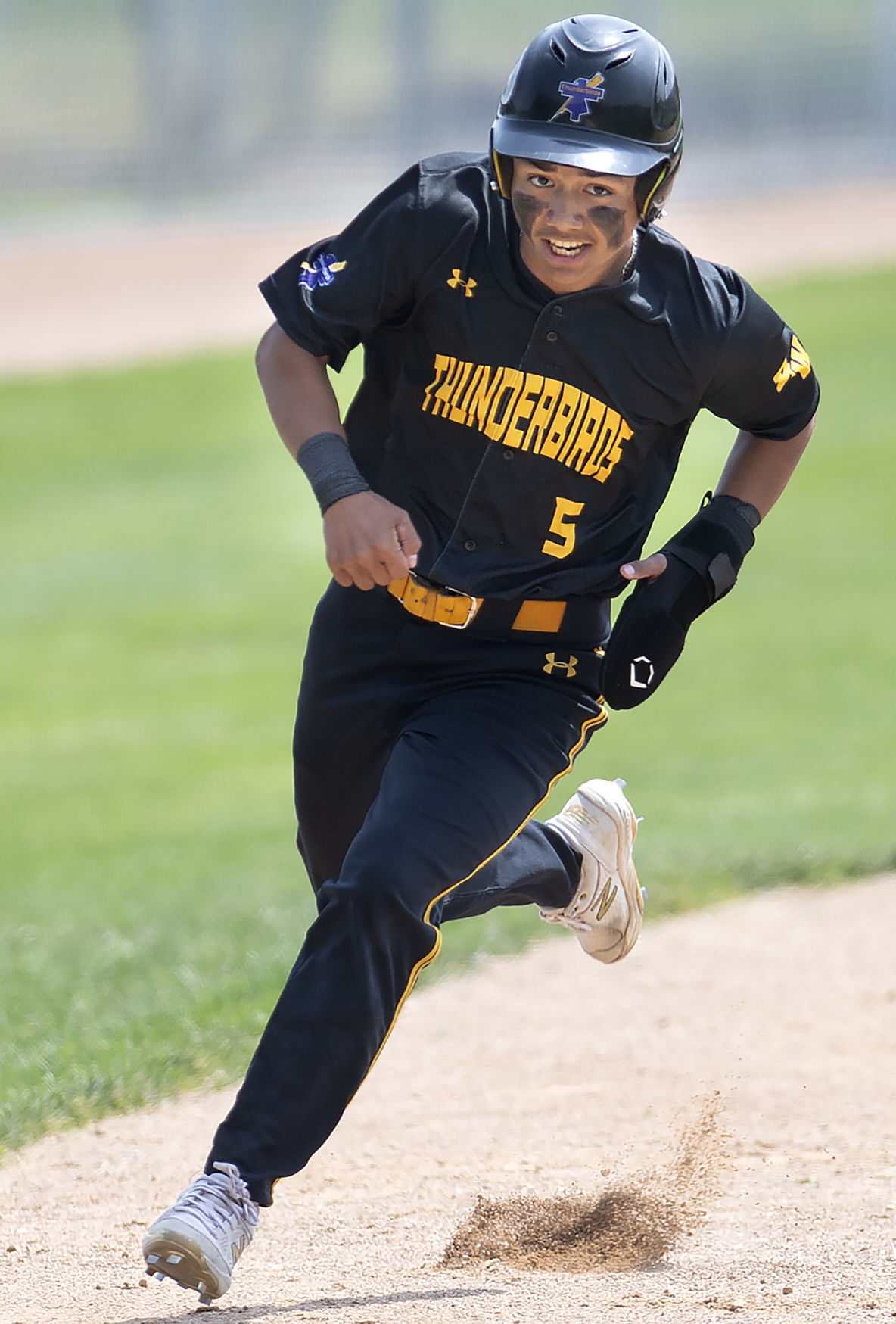 Bellevue West's Cam Madsen (5) rounds third base to score the winning run in the ninth inning of a first-round Class A state game against Archbishop Bergan on Saturday at Sherman Field.

From the opening pitch to the final groundout, the pressure was on at Sherman Field.

Fans of both Lincoln East and Lincoln Southwest in the bleachers made their presence felt in the opening round of the Class A state baseball tournament. Neither East nor Southwest had any players with previous state tournament experience, making it all the more important that the players kept their cool and handled the pressure.

In the end, it was No. 3 Lincoln East that rose to the occasion. East had 10 different players reach base as they scored runs in the first, second and third innings in an 8-1 opening-round state tournament win Saturday. Lincoln Southwest committed four errors and mustered just two hits.

“I just think there were a lot of nerves; kids were excited and you could tell kids on both teams really wanted to perform and play well,” East coach Mychal Lanik said.

Lincoln East (22-8) scored its runs early and often, starting with a run built on two Southwest (19-11) errors in the bottom of the first. Freshman AJ Evasco had a big two-RBI hit in the second inning, and the Spartans broke the game open with a four-run third inning that included RBI singles from Ryan Clementi and Keinan Lentell.

A first-inning leadoff double from Ethan Morrow nearly gave Southwest the first run of the game, but a line-drive double play erased that threat. The Silver Hawks scored their only run in the second inning and hardly threatened the rest of the way, striking out seven times.

“I felt like we put good swings on certain pitches, but at times we didn’t take advantage of the opportunities that we had,” Southwest coach Mitch Vernon said.

The East pitching staff deserves credit for shutting down a normally potent Southwest offense, beginning with a nice four-inning outing from starting pitcher Jalen Worthley. Grant Springer and Charlie Mosser then combined to toss the final three innings, with neither allowing a hit.

“Grant was outstanding to come in like he did, and Charlie after him, too,” Lanik said. “That’s what seniors do at this time of the year: make big-time plays, and our seniors were outstanding today.”

Lincoln East will play Bellevue West in the winners' bracket at 7 p.m. Monday at Haymarket Park, while Lincoln Southwest will play Archbishop Bergan at 1 p.m. in the losers' bracket.

Bellevue West 1, Archbishop Bergan 0, 9 innings: All it takes is one run to break a pitcher’s duel.

The starting pitchers for both Bellevue West and Archbishop Bergan brought their best, and it took nine innings for either team to simply get a run across.

Cam Madsen singled in the bottom of the ninth inning and Connor Schneider immediately followed with a walk-off double to deep left field that gave No. 2 Bellevue West a 1-0 win over No. 8 Archbishop Bergan.

Archbishop Bergan (16-8) starter Carter Sintek only allowed five hits over 8 1/3 innings in a performance that would normally merit a win. However, Bellevue West’s (28-4) Jaxon Jelkin’s mix of fastballs, sliders and curveballs allowed the senior to strike out 15 batters while allowing just one hit in seven innings of work.

“Credit to their guy, and credit to our guy because I thought they were both outstanding today,” Bellevue West coach Jason Shockey said. "I’m really excited for our guys and I’m proud that we continued to battle and finally broke the seal there at the end.”

State baseball: Here's the lowdown on Saturday's first-round games in Class A

The No. 4 vs. No. 5 matchup between Papillion-La Vista South and Millard West catches the eye. So does the Capital City battle. What else?

Mychal Lanik has built a support staff around him that is helping Lincoln East put its best foot forward as it gears up for the state tournament.

State baseball: Here's the lowdown on Saturday's first-round games in Class B

The No. 3 vs. No. 4 battle, Hastings vs. Beatrice, catches the eye. We run through all four first-round Class B baseball games.

“It’s definitely fun, especially in the state tournament because you can talk a little trash.”

The Norris two-way standout delivered the first pitch of the game, and had a say in the last: "I think it was time to send it home.”

State baseball: Antlers and Kernels stay alive in Class B

Both Elkhorn and Central City/Fullerton/Centura got complete-game efforts from their pitchers in elimination games.

Wobbly defense is unforgiving at this stage: "You got to play clean baseball at the state tournament, and we didn't do that."

Bellevue West's Cam Madsen (5) rounds third base to score the winning run in the ninth inning of a first-round Class A state game against Archbishop Bergan on Saturday at Sherman Field.