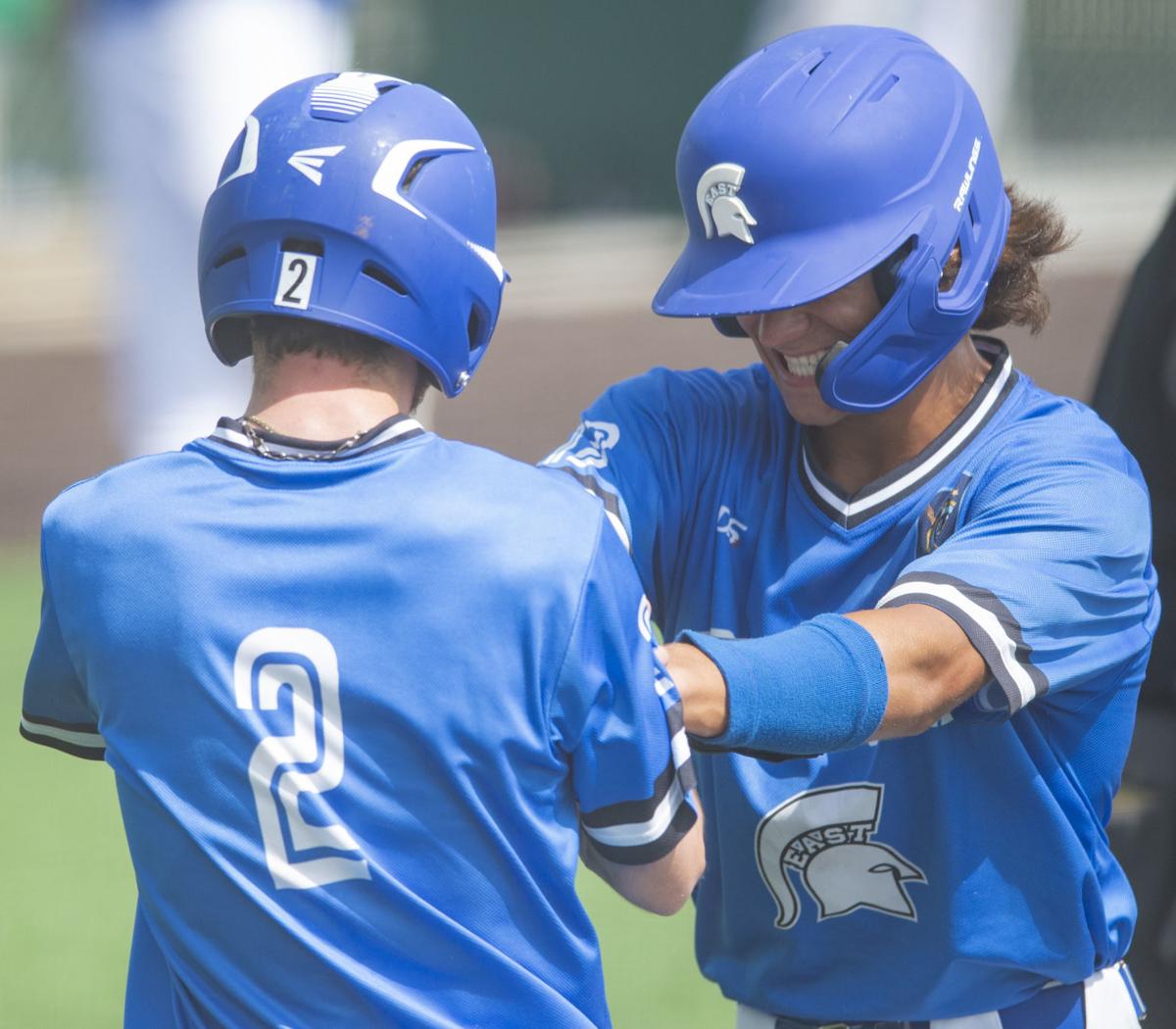 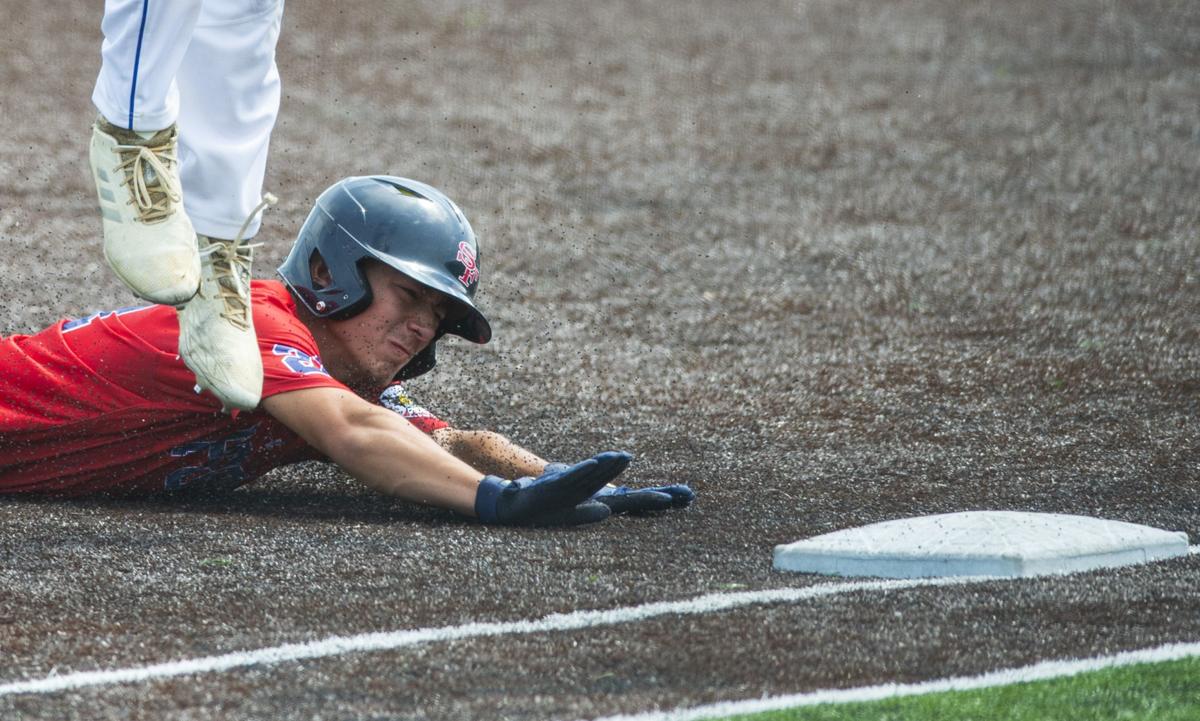 Sioux Falls West's Ethan Behrend slides under the feet of Carpet Land's Cooper Erikson back to the safety of first base Saturday at Den Hartog Field. Carpet Land won 7-3.

Even in a unique year of high school athletics, it’s hard to find a more unique situation than what the Pinnacle Bank American Legion baseball team went through this month.

Lincoln Public Schools announced on June 17 that multiple members of Pinnacle Bank's team (made up of Lincoln Southwest players) tested positive for COVID-19, one day before its season was scheduled to start.

With two weeks of mandatory self-quarantine ahead, that meant the Pinnacle Bank varsity team would be unable to play in one of the summer’s flagship Legion events — the Mike Peterson/Coach K Tournament.

So, when Pinnacle Bank coach Mitch Vernon asked JV skipper Matt Faulkner to enter the JV team (On To College) into the tournament instead, Faulkner made his decision instantly. He wanted in.

“Being able to represent Southwest (was important) because Coach K (former Northeast and Southwest coach Doug Kaltenberger) meant so much to Southwest and the baseball community in Lincoln, and we’re proud of being a part of it,” Faulkner said.

Although much of the current JV roster was a part of last year’s group that won the junior state tournament, the entrance of a JV team into the Peterson Tournament naturally raised some questions. Could the juniors remain competitive against top-tier varsity teams, or would Pinnacle Bank’s games be destined for mercy rule endings?

While Pinnacle Bank squandered an early lead and fell 5-3 to North Platte on Saturday at Sherman Field, its opening-round win and close losses have proved that not only can the Pinnacle Bank JV team compete, it can win, too.

“Our guys didn’t look overmatched, they looked like they belonged, which is something you don’t always expect from a JV team,” Faulkner said.

Pinnacle Bank opened the Peterson Tournament in strong fashion with a 9-2 win over Judds Brothers (Lincoln Northeast), which gave Pinnacle Bank confidence for the rest of the tournament, according to Faulkner.

Even after allowing five runs in the first inning against Omaha Skutt on Friday, Pinnacle Bank went on a late-game rally before losing 9-7.

And against North Platte, it was Pinnacle Bank that struck first and nearly took control of the game. Its first two runs came on the type of plays one might expect — an infield single and a fielder’s choice — but it was clear that Pinnacle Bank was ready to work.

After North Platte earned a run of its own in the third inning, Pinnacle Bank fired right back with an RBI single from Jack Shaffer, who went 2-for-3 and also scored a run in the loss.

However, things came undone in the fifth inning when Pinnacle Bank issued four walks and allowed one hit, which North Platte converted into three runs.

Although Pinnacle Bank allowed just five hits on the evening, North Platte walked away with the 5-3 victory. Even in defeat, it was hard to find many frowns among the Pinnacle Bank players who had achieved much of what they came to do: prove they belong.

“The kids were up, they were with each other and they were positive,” Faulkner said. “… They’re proven winners and it’s hard to find a better group to coach.”

Behind a one-hit pitching showing from Connor Pfundt, JC Brager rolled to a 12-0, five-inning win against Nebraska City on Saturday to cap a 3-0 record in the National League West bracket. The Southeast team will play Omaha Westside at 12:30 p.m. Sunday at Sherman Field.

Waverly Empire Netting and Fence advanced to the semifinals with a pair of wins Saturday. The Vikings defeated Union Bank (Lincoln Pius X) 7-3 in a completion of a suspended game from Friday.

Three Waverly pitchers combined to limit Elkhorn to three hits in a 2-1 win on Saturday afternoon.

After JC Brager scored six runs in the seventh to win the semifinal, the team rode an emotional high in the Mike Peterson/Coach K tourney final.

It was the moment that each member of the Pinnacle Bank American Legion baseball team had been waiting for during its virus quarantine — a triumphant return to the baseball diamond.

Sioux Falls West's Ethan Behrend slides under the feet of Carpet Land's Cooper Erikson back to the safety of first base Saturday at Den Hartog Field. Carpet Land won 7-3.