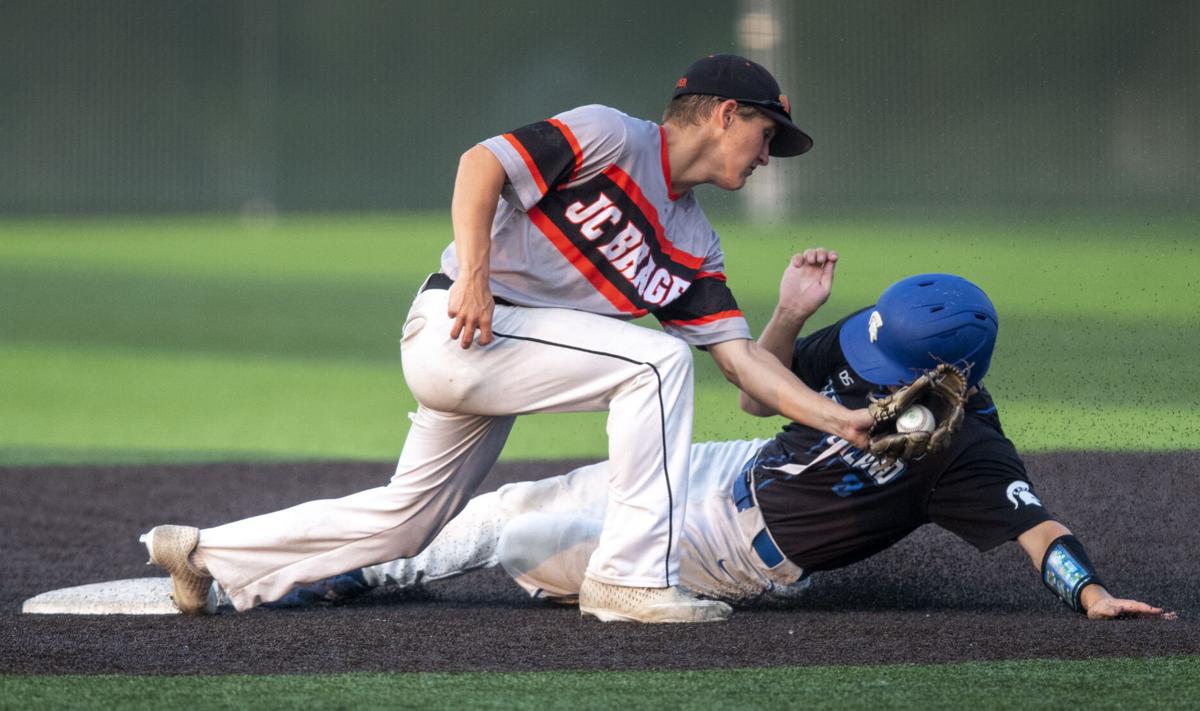 Carpet Land's Keegan Brink (right) steals second base ahead of the tag of JC Brager's Connor Pfundt on Tuesday during the A-5 Legion Baseball Tournament at Den Hartog Field. 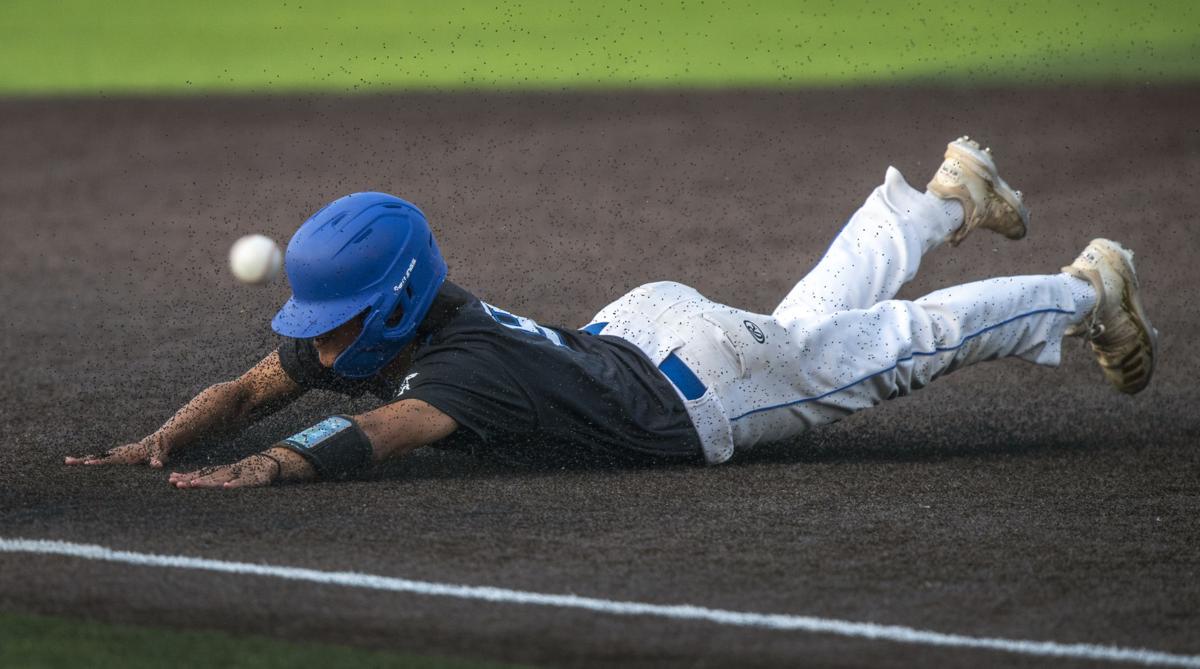 Carpet Land pinch-runner Keinan Lentell (9) steals third base, then scores when the throw from the JC Brager catcher gets past the third baseman in the second inning on Tuesday, during the A-5 Legion Baseball Tournament at Den Hartog Field.

With a district title on the line, there was plenty worth fighting for in Tuesday’s American Legion A-5 baseball tournament action at Den Hartog Field.

But at the end of the day, there were no hard feelings, no seniors who played their last game and, in a way, no losers.

After all, each of Carpet Land (Lincoln East), JC Brager (Lincoln Southeast) and Anderson Ford (Lincoln North Star) had already secured their spots in the upcoming Legion state baseball tournament before a single pitch had even been thrown.

After JC Brager won 16-7 to eliminate Anderson Ford earlier on Tuesday, Carpet Land’s 8-0 championship win over JC Brager means it can stake its claim as the top Legion baseball team in the city. Lincoln East had the best spring season of any city team with a fourth-place finish in the Class A state baseball tournament, and the Carpet Land Legion team followed with an equally impressive summer season.

With the bat and arm, Ryan Clementi lifts Carpet Land past JC Brager in Legion tournament

Carpet Land (31-11) had strong showings at travel tournaments in Indiana, South Carolina and Minnesota, and only six of its 11 losses this summer came against in-state teams. With a strong core of college-bound seniors such as Brady Bell and Sam Wragge (Hutchinson Community College in Kansas), Keinan Lentell (Barton CC in Kansas), Austin Schneider (New Mexico State) and Tyson Romero (Nebraska Wesleyan), Carpet Land clearly had the talent to make the summer state tournament.

But it still had to win the games to make it happen, and Carpet Land did just that with a 4-1 performance at the area Legion tournament.

Wragge threw a five-inning one-hitter to open the tournament, and he brought his best stuff to the mound once again Tuesday, striking out five batters and allowing just one hit in four innings of work. Carpet Land smacked four extra-base hits in the win, with Keegan Brink leading the way with a three-RBI performance.

“There’s been a lot of hard work over the last couple years and seeing all that dedication means a lot," Wragge said. “We’re hoping to win and go to regionals so we can stay with this team as long as we can. It’s one last run and we have to enjoy the moment and just do the best we can.”

Tournament runner-up JC Brager’s (29-12) only two losses this week both came to Carpet Land, and there are plenty of positives to take away from a strong week of baseball. JC Brager scored 15-plus runs in back-to-back wins over Judds Brothers (Lincoln Northeast) and Anderson Ford, and has averaged 11 hits per game since July started.

Making the state tournament is no small feat for a team that struggled to consistently string together wins during the spring. JC Brager is a team that is now playing its best baseball at the right time.

“It shows who our kids are and the character they have," said JC Brager coach Montana Jones. "I told them they should be extremely proud, they had a phenomenal weekend and the season’s not over. You bought yourself an extra week because of the performances and the grit they had this week."

That third team is Anderson Ford (24-11), which clinched its spot with a 6-4 win over Carpet Land on Monday night.

“I don’t think I’ve seen a better atmosphere at Den Hartog than (Monday) night,” said Anderson Ford coach Sam Ayars. “We knew going into it that we could give up 15 runs, lose the game and still be in state, so to still come out and compete and win is huge.”

An inexperienced North Star team had an up-and-down spring season, picking up several impressive wins alongside surprising losses and suffered a district final loss that ended its season. Ayars knew that Anderson Ford had better odds of making it to the summer state tournament, and now he hopes the team can replicate its 2019 appearance at the Legion state tournament, when Anderson Ford won its opening two games.

“They’ve worked so hard and being so close in the spring makes it a big thing to get it in the summer,” Ayars said. “I know we’re the host seed, but I still think we have just as good a chance as anybody next week to come out and surprise some people.”

ONLINE: Check out coverage from the final day of the A-5 senior legion area tournament at Den Hartog Field. @JournalStar.com

David Swanson had key RBI hits to fuel JC Brager, whose head coach says, "This time of season, you just need to find a way to win."

On a humid morning that grew progressively hotter as the sun rose over Den Hartog Field, Carpet Land (Lincoln East) had to break out all-white…

OMAHA — A seventh-inning rally and a strong effort by senior pitcher Will Volenec led to victory Sunday for Creighton Prep.

Omaha Skutt coach Tim Lackovic was not too worried after three innings, despite his team facing a three-run deficit in a winners’ bracket game…

Carpet Land's Keegan Brink (right) steals second base ahead of the tag of JC Brager's Connor Pfundt on Tuesday during the A-5 Legion Baseball Tournament at Den Hartog Field.

Carpet Land pinch-runner Keinan Lentell (9) steals third base, then scores when the throw from the JC Brager catcher gets past the third baseman in the second inning on Tuesday, during the A-5 Legion Baseball Tournament at Den Hartog Field.