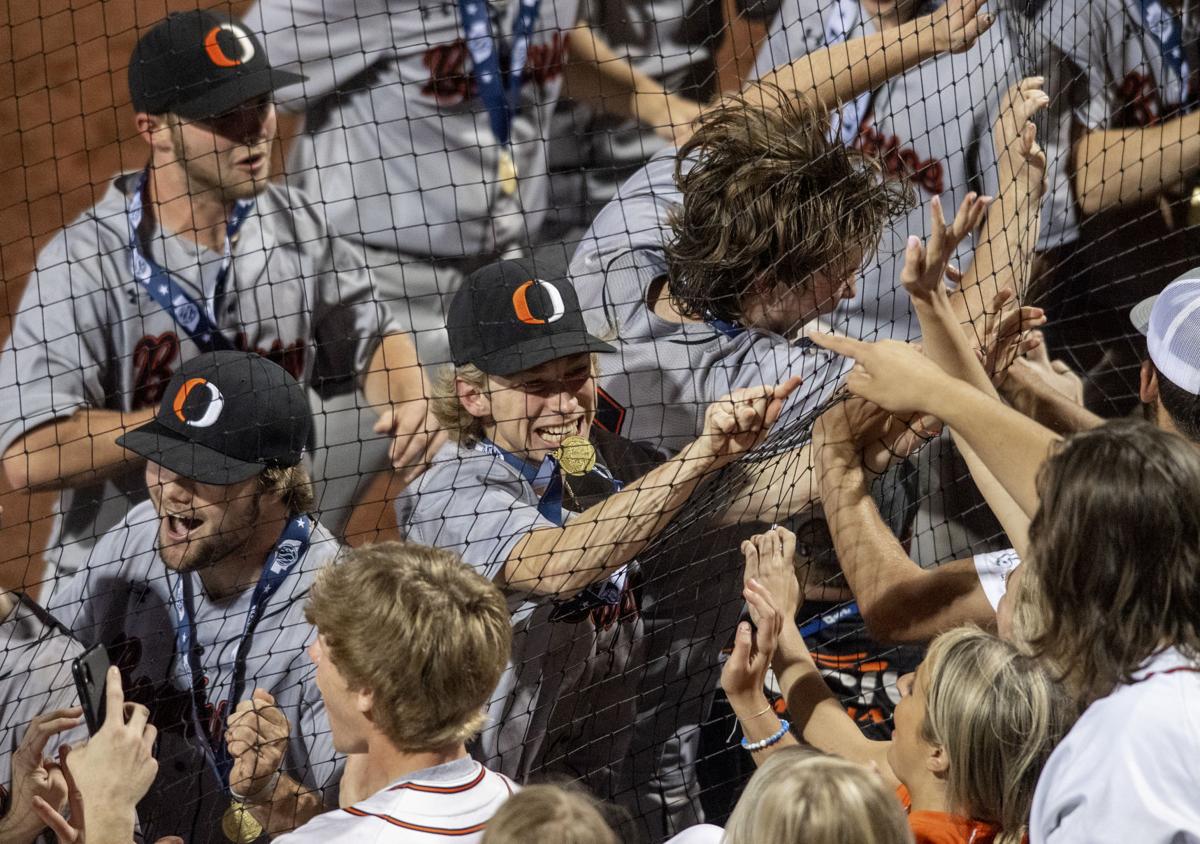 Beatrice players celebrate with their fans after defeating Norris for the Class B state baseball championship Thursday at Werner Park in Papillion. 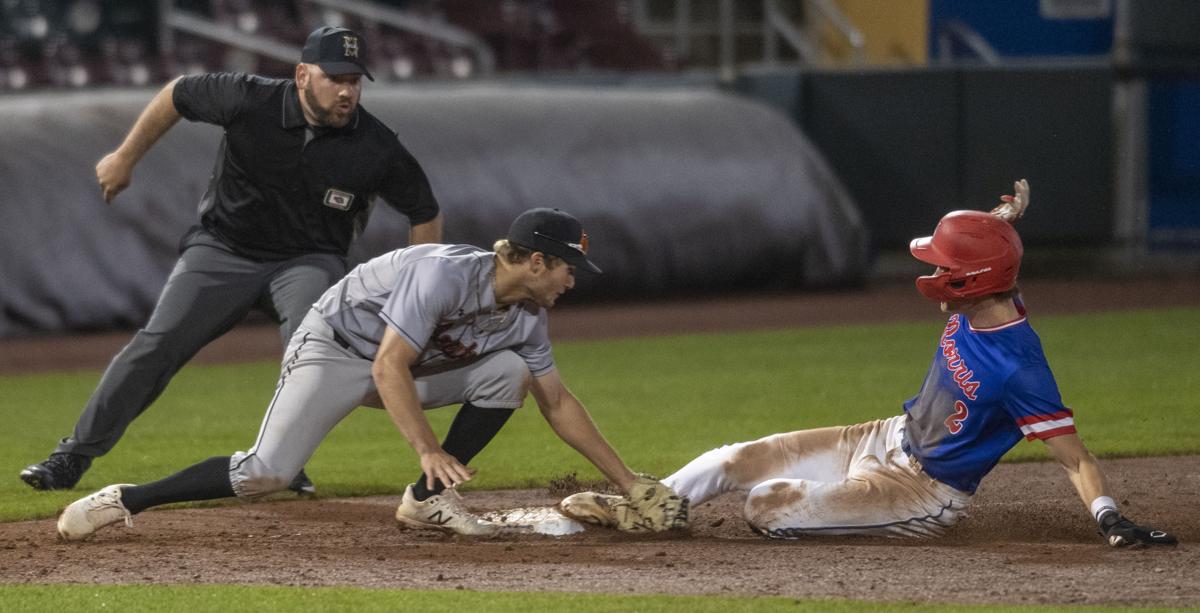 Norris' CJ Hood, trying to steal, gets tagged out by Beatrice third baseman Austin Burroughs for the second out of the seventh inning Thursday at the Class B state tournament at Werner Park in Papillion.

SHAWN EKWALL For the Journal Star

PAPILLION — Qwin Zabokrtsky may have been nervous, but the Beatrice senior pitcher didn’t show it.

Zabokrtsky picked up his second win of the Class B state tournament, hurling six innings while limiting a potent Norris offense to just five hits. Fellow senior Will Reimer came on to get the final three outs, the last one a strikeout looking as Beatrice won its first-ever state baseball title 5-4 over the top-ranked Titans on Thursday night at Werner Park.

When asked if he felt any nerves, Zabokrtsky didn’t hesitate. “Yeah I was shaking out there,” he said. “I didn’t really do anything different than I did Saturday. I was just trying to put the ball in good spots and our defense played great.”

State baseball: With the bat and the arm, Christian Hobbs lifts Millard South over the hump for Class A title

State baseball: After rolling past them Wednesday, Norris hopeful of another shot at Orangemen

The No. 4 Orangemen flashed some serious leather as Zabokrtsky only fanned two Titans. Center fielder Max Reis made six putouts in the field, with several coming after he covered a lot of ground to get there.

Norris put pressure on Reimer in the bottom of the seventh, but Beatrice catcher Connor Hamilton came up huge, gunning down CJ Hood at third to record the second out of the inning.

The Titans trimmed a 5-1 deficit down to 5-4, scoring a run in the fifth and two runs in the sixth. But Reimer came in and slammed the door in the seventh.

Zabokrtsky was confident in his teammate finishing what he started.

Even with the late-inning drama, both coaches pointed to a three-run first inning by Beatrice as the key to the game.

Reis, Adam DeBoer and Austin Burroughs came in to score in the top of the first, as the Orangemen chased Norris starter Colton Wahlstrom after 1 2/3 innings.

“I maybe got a little greedy in the first with the squeeze attempt, but I knew getting on top first was key,” Beatrice coach Chris Belding said. "If we had won the toss we would have chosen visitor anyway.”

Some of Beatrice’s key hits that inning were just out of the reach of Norris fielders. Reis’ double was just beyond right fielder Brayson Mueller and Burroughs' RBI single up the middle eluded a pair of Norris defenders.

“Sometimes it’s better to be lucky than good,” Belding said. “We had a couple down the right-field line that just got down.”

Belding, who went to school at Beatrice and played Legion ball in the summer, had one word to describe his team’s title run.

“Fantastic," he said. "I didn’t even realize we’d never won a state title when I took over the program. I think before this year, we’d won one game at state. People were really excited after we won two this year."

To add to the intrigue, the Orangemen entered the tourney on a skid. They were the lone wild-card entrant, after losing to Nebraska City 2-1 in districts. They battled the injury bug, with Reimer just coming back from a concussion.

“The last week and a half we didn’t play real well,” Belding said. “We had guys injured and the guy (Reimer) that closed had a concussion and had to stay in a dark room. We finally got healthy and things went our way this week.”

Belding also praised Zabokrtsky and his bulldog effort on the mound.

“The kid’s amazing,” he said. “He slammed the door on that lineup and kept them off balance all game.

“I’d give the ball to him every day and twice on Sunday.”

“For sure that first inning was key. For them to jump out 3-0 in this environment was huge. We had our opportunities to make plays, we just couldn’t come up with the one big hit we needed.”

The Titans, who finished runners-up for the fourth time since 2015, finished the year 26-9. The Titans reached the championship game with an 11-1 win against Omaha Skutt earlier Thursday.

“We’ve been in so many games where a lot of other teams would have quit, but these guys never quit and they always fight.”

NSAA approves girls wrestling as a sanctioned sport for 2021-22

After falling just short the past two years, girls wrestling will be a sanctioned sport by the NSAA beginning in 2021-22.

Results from the state baseball tournament.

Beatrice players celebrate with their fans after defeating Norris for the Class B state baseball championship Thursday at Werner Park in Papillion.

Norris' CJ Hood, trying to steal, gets tagged out by Beatrice third baseman Austin Burroughs for the second out of the seventh inning Thursday at the Class B state tournament at Werner Park in Papillion.