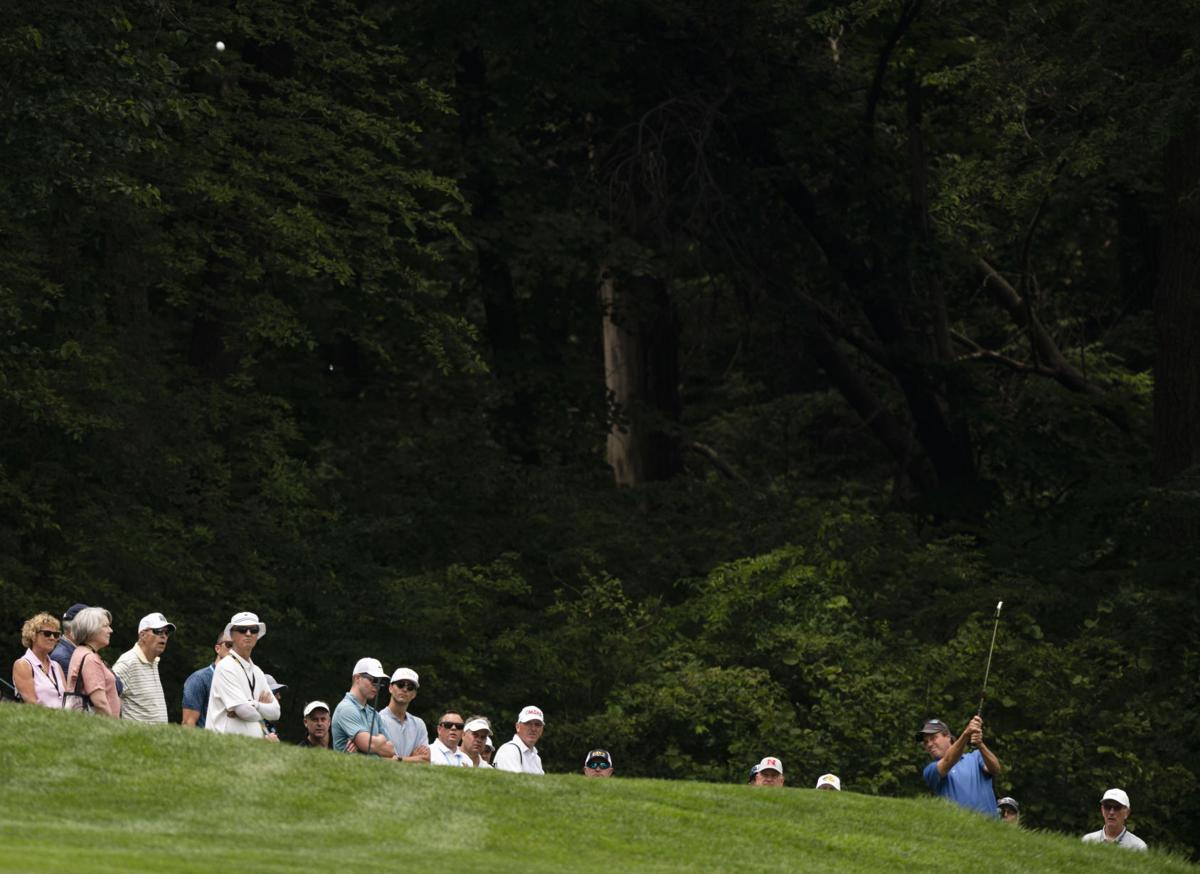 Stephen Ames hits his ball onto the green around the 18th hole at the U.S. Senior Open on Thursday at Omaha Country Club. 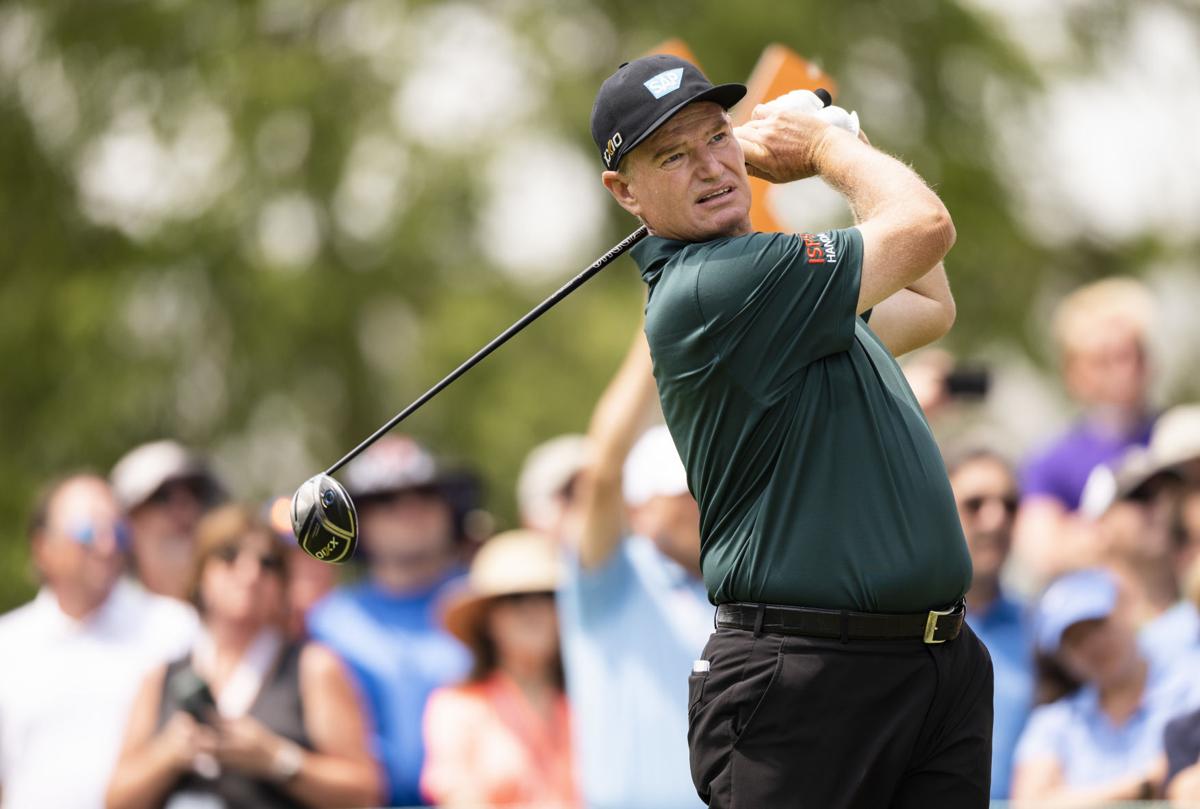 Ernie Els tees off on the first hole at the U.S. Senior Open on Thursday at Omaha Country Club. 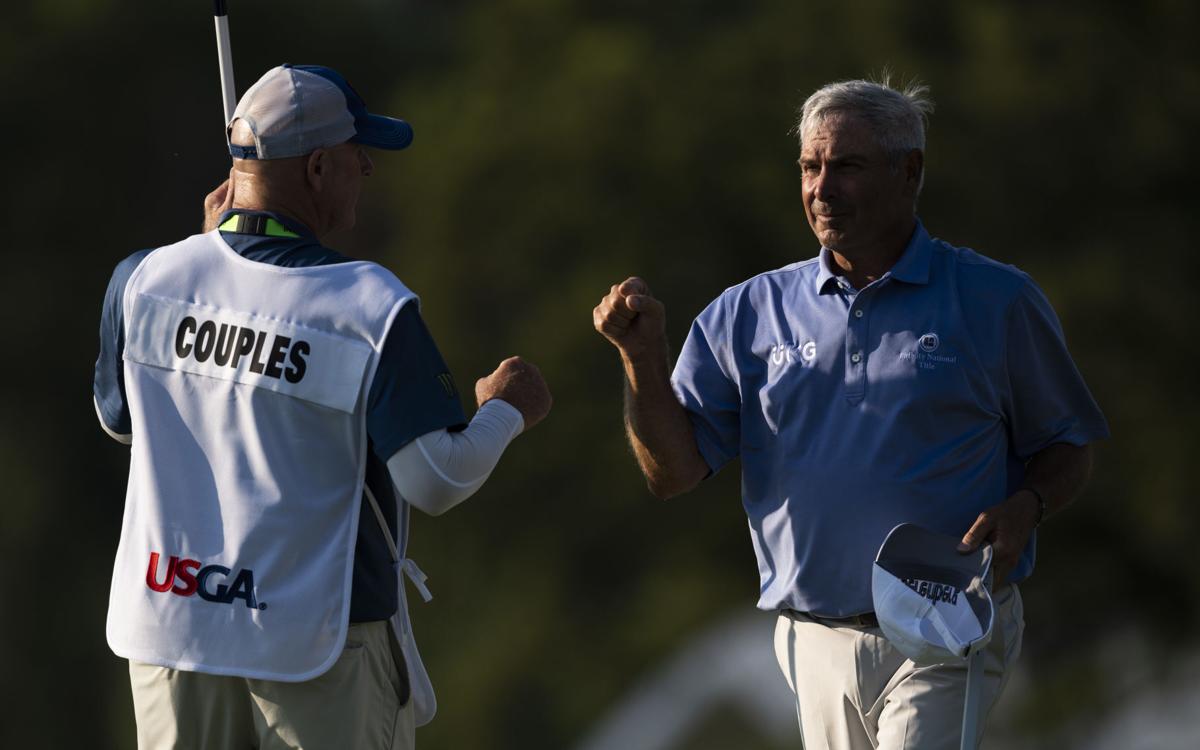 Fred Couples fist bumps his caddie after finishing the 18th hole at the U.S. Senior Open on Thursday at Omaha Country Club.

OMAHA — The Thursday afternoon tee times brought out the star power on the first day of the U.S. Senior Open championship at Omaha Country Club.

In back-to-back groups the six players have combined to win 11 major championship on the regular professional tour, in addition to numerous other majors on the Champions Tour.

In one group was Fred Couples (the 1992 Masters champion), Mark O’Meara (winner of the Masters and British Open) and Jose Maria Olazabal (two Masters titles).

Those two groups had a large contingent of spectators following them on the course for part of the day. Els impressed the fans with several long drives, and got some big cheers when he made back-to-back birdies on the fifth and sixth holes.

The groups seemed relaxed playing together. While Couples waited in the fourth fairway he asked O’Meara’s caddie where he was from, and they talked about his family.

Couples had the best round from those groups with a 69, after birdies on his final two holes. He’s tied for eighth place. Couples said the key to his strong finish was better tee shots.

“The course is hard, so it will make you look mediocre,” Couples said.

The other star power in the featured group included Joe LaCava — who is best known for being Tiger Woods’ caddie — being on the bag for Couples. Woods is injured, and LaCava had previously worked for Couples for many years.

Ames and his Omaha caddie in lead

There are players from 20 countries in the tournament. When the same tournament was here in 2013 the winning score was 13-under.

Ames was rewarded on the hilly course with the tall rough that the U.S. Open is known for by keeping the ball in the fairway. He made seven birdies and had two bogies.

Ames' caddie is Troy Martin, a longtime PGA caddie who lives in Omaha. They only recently started working together. Martin was looking for a job because Peter Jacobsen wasn’t playing much this year.

“I decided, 'OK, I'll give (Martin) a trial run,' and our trial run started off with a 10th in Birmingham and a second in Atlanta,” Ames said. “I'm like, 'OK, what are you doing for the rest of the year?' That's how it ended up, and obviously we won in Des Moines, just up the road from here.”

After a trying spring, Kenny Perry reveling in return trip to Omaha for U.S. Senior Open

This week Omaha Country Club has gotten a few small comparisons to Augusta National Golf Club, where the Masters is played each year, from players and national media. That’s because of both the severe slope on the course and greens and the immaculate conditions of the grounds.

“What stands out about this golf course is it's probably the most undulated from tee to green that we ever walk,” Langer said. “It's a very extreme up-and-down golf course, and the rough is very punishing right now, and the greens are very severe. I mean, everybody talks about Augusta greens. I think these are more severe than Augusta in terms of slopes.”

* “We’re not alone,” said a fan after Olazabal left his tee shot 15 yards short of the green on the 188-yard fifth hole.

* “So smooth, isn’t it?” said a fan after watching Couples’ swing.

What you may not have seen on the TV broadcast

* Els giving a fist bump to the volunteer scorers walking with his group when he met them on the first tee.

* A boy proudly showing his dad the golf ball that Kelly, a two-time winner this season, gave him after the eighth hole.

* A caddie getting a quick smoke break, after handing off the driver to his player on a long hole and going ahead before the tee shots.

Photos: A look at the sights from the opening round of the U.S. Senior Open at OCC

The U.S. Senior Open is this week in Omaha. The USGA senior director gives us an inside look at the event

Co-director of the U.S. Senior Open Ben Kimball talks hole placement, the return to Omaha and who'll have a big following at next week's event at the Omaha Country Club.

The U.S. Senior Open is returning to Omaha, and 'powerful names are coming here to play'

Rocco Mediate is best-known for battling Tiger Woods in a 19-hole playoff at the U.S. Open in 2008. He praised the upcoming event in Omaha.

OMAHA — On a day when the Omaha Country Club showed its teeth, Jim Furyk bit back.

OMAHA — That Jim Furyk was able to extend his lead during the third round of the U.S. Open was only about the third most impressive thing that…

Jim Furyk, the 2003 U.S. Open champion, now adds the U.S. Open for senior golf, becoming the eighth player to win both the U.S. and U.S. Senior Opens on a list that includes Arnold Palmer and Jack Nicklaus.

Stephen Ames hits his ball onto the green around the 18th hole at the U.S. Senior Open on Thursday at Omaha Country Club.

Ernie Els tees off on the first hole at the U.S. Senior Open on Thursday at Omaha Country Club.

Fred Couples fist bumps his caddie after finishing the 18th hole at the U.S. Senior Open on Thursday at Omaha Country Club.