File-This Dec. 13, 2020, file photo shows Dallas Cowboys defensive end Aldon Smith (58) returning a fumble during an NFL football game against the Cincinnati Bengals in Cincinnati. A sheriff's office in Louisiana has issued an arrest warrant for the new Seattle Seahawk, Smith. St. Bernard Parish sheriff's deputies responding to a call for medical assistance in Meraux, La., on Saturday, April 17, 2021, found a man who said he had been assaulted by an acquaintance outside a business in Chalmette, Sheriff James Pohlmann said Monday in a post on the agency's Facebook page. Detectives identified the suspect as Smith, 31, and took out a warrant for second-degree battery. 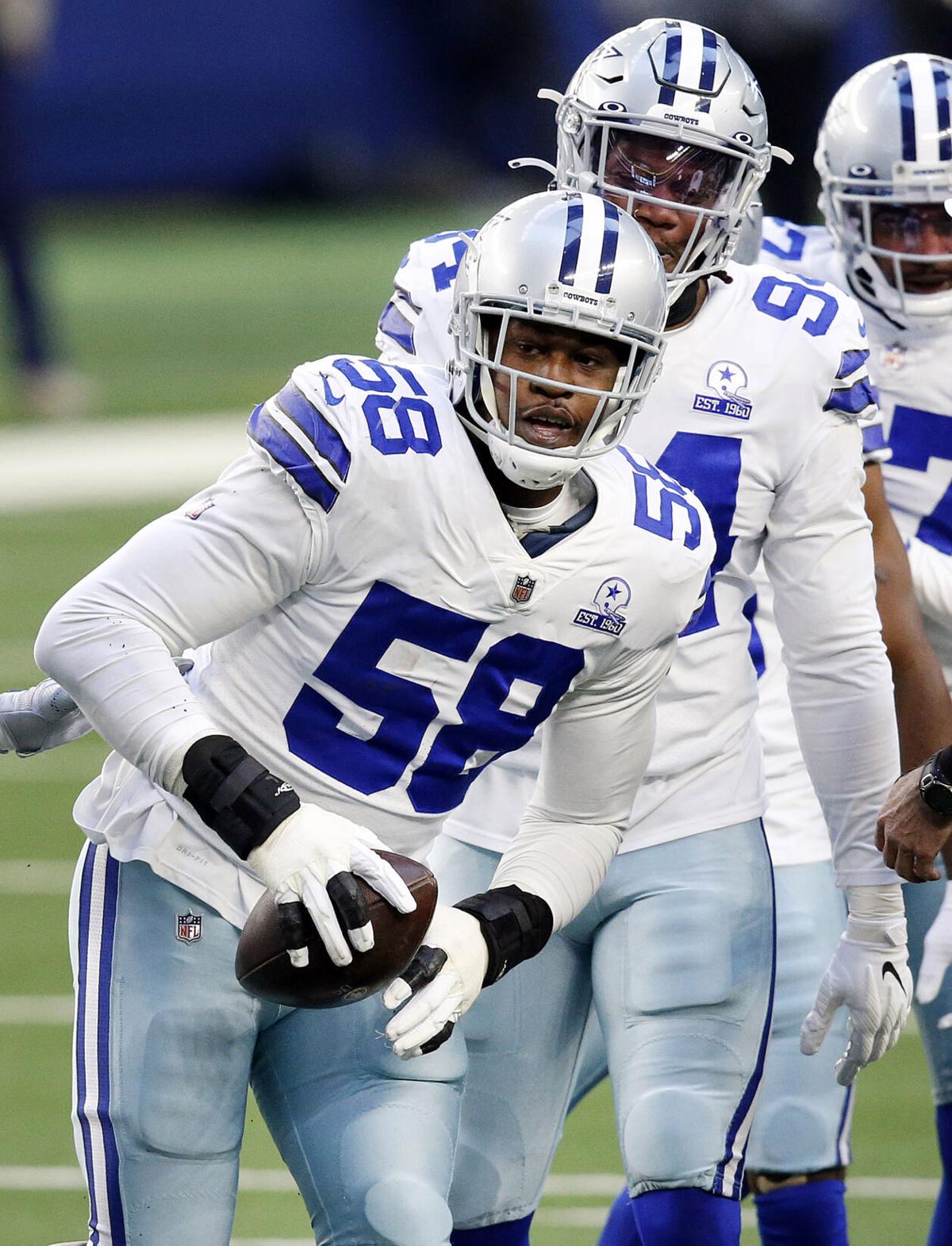 SEATTLE — Aldon Smith, who signed with the Seahawks last week in the latest step in reviving an NFL career that has been beset by legal and other issues, is wanted in connection to a second-degree battery case in the New Orleans area, according to a report from WDSU-TV in New Orleans.

The station posted a wanted bulletin that alleges Smith committed the offense on Saturday. The Seahawks announced his signing on Thursday after he was in Seattle for a visit to the VMAC the day before.

The bulletin states that Smith committed the offense at the French Press Coffee House in front of Home Depot in Chalmette, which is east of downtown New Orleans. The bulletin stated Smith does not have an address in the area but does have relatives there.

ESPN confirmed the incident and reported that St. Bernard Parish District Attorney Perry Nicosia said Smith “allegedly choked a victim unconscious” during a confrontation that began inside a coffee house. According to WDSU, the incident was captured on camera.

In a statement Monday afternoon, the Seahawks said they were looking into the matter.

“We are aware of the reports regarding Aldon Smith,” the statement read. “Aldon notified us and we are gathering more information. We have no further comment at this time.”

Smith signed what was reported to be a one-year contract with the Seahawks. Financial details were not immediately disclosed and his contract had not been revealed publicly yet as of Monday afternoon.

Smith, 31, was suspended by the NFL for a variety of offenses from 2016-19 including a domestic violence arrest, a hit-and-run and one yearlong suspension for violating the league’s policy on substance abuse. He was cleared to play last year and saw action in all 16 games with the Cowboys.

In 2018 Smith also pleaded no contest to two misdemeanor charges as part of a plea with prosecutors in San Francisco to settle a domestic violence case. Smith also pleaded no contest to charges involving a hit-and-run accident in 2015 after a charge of DUI was dropped. Smith also had an arrest for making a false bomb threat at Los Angeles International Airport in 2014 (an incident for which he was not ultimately charged). In all, Smith had four separate NFL suspensions costing him 80 games from 2014-2020.

Seattle coach Pete Carroll and general manager John Schneider have not been available to the media this offseason — Carroll last spoke two days after the team’s loss to the Rams in the wild card round of the playoffs — so they have not had comment on the team’s signing of Smith.

A report from SI.com last week stated that the Seahawks initially offered a contract in March but that those talks then broke down due to the team’s concerns over Smith’s “personal issues.’’ SI.com reported those issues played a role in Dallas not being interested in re-signing Smith after a season in which he had five sacks, three against the Seahawks in the third game of the year.

Seattle reportedly was interested in trading for Smith at midseason in 2020 before acquiring Carlos Dunlap from the Bengals, instead. One report stated the Cowboys declined to trade Smith to the Seahawks in part out of spite over hard feelings emanating from failed negotiations for Earl Thomas in 2018.

Smith was reinstated by the NFL in March 2020, with USA Today reporting last July that Smith had been sober since July 2019.

“I was thinking in my head, ‘It’s been a long road,’” Smith said to USA Today during training camp last year. “Being back on the field after that much time off was a blessing. … I was just really grateful.”

Smith has seven career sacks against the Seahawks in the regular season — his most against any team — and two more in the 2013 NFC Championship Game won by Seattle.

It’s thought his three-sack performance against the Seahawks last year contributed to the team’s interest in signing him this spring to add to a pass rush that had already been bolstered by the re-signing of Dunlap and the signing of free agent Kerry Hyder.

Meet the Pro Football Hall of Fame class of 2021

Justin Fields has star potential and already has changed the mood in Chicago. Can he alter the Bears’ wayward QB history?

They told themselves they were done. Emotionally spent. Over it all.

By October, Micah Parsons will be the best Dallas Cowboys linebacker and the second best defensive player on the team.

Just how fast is DK Metcalf? He will test himself against elite track athletes Sunday

It’s no secret that Seahawks receiver DK Metcalf is one of the fastest players in the NFL.

Gene Frenette: Why Mac Jones is an ideal quarterback for Bill Belichick's Patriots

It didn’t take Mac Jones long to get fully indoctrinated and buy into the Patriot Way. He’s a natural for it, honestly.

Catching a bomb from Tom Brady wouldn’t be unheard of for Rob Gronkowski, but the veteran tight end broke another record over the weekend when he pulled in a pass thrown from a helicopter 600 feet overhead in Arizona.

We always talk about the Jets and their endless quest to find the new Namath, who won the Jets their only Super Bowl over a half-century ago.

Tim Tebow works out with Jaguars as a tight end, per reports

Hours before being drafted, Clemson quarterback Trevor Lawrence appears to have been upstaged. By another rangy quarterback with strong ties to new Jaguars coach Urban Meyer.

We interrupt your fixation over what will happen in the NFL draft to bring you some other NFL offseason drama (and you wonder why this league is No. 1 among U.S. fans).

File-This Dec. 13, 2020, file photo shows Dallas Cowboys defensive end Aldon Smith (58) returning a fumble during an NFL football game against the Cincinnati Bengals in Cincinnati. A sheriff's office in Louisiana has issued an arrest warrant for the new Seattle Seahawk, Smith. St. Bernard Parish sheriff's deputies responding to a call for medical assistance in Meraux, La., on Saturday, April 17, 2021, found a man who said he had been assaulted by an acquaintance outside a business in Chalmette, Sheriff James Pohlmann said Monday in a post on the agency's Facebook page. Detectives identified the suspect as Smith, 31, and took out a warrant for second-degree battery.