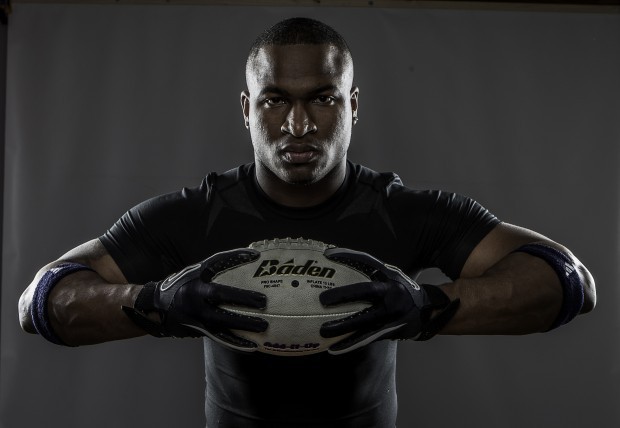 Marlon Lucky is one of the star players for the first-year Lincoln Haymakers. 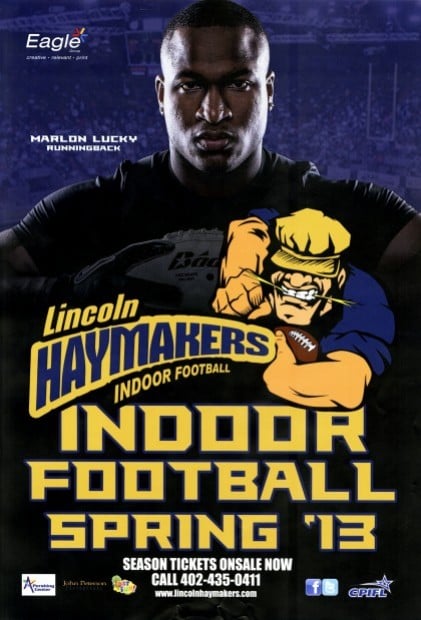 Marlon Lucky is an easygoing, friendly sort. It probably would take a lot to get his blood boiling.

He became a bit riled Tuesday.

Lucky sat at a desk in the offices of the Lincoln Haymakers, an arena football team that recently relocated from Council Bluffs, Iowa. He wore Cincinnati Bengals sweat pants. The Bengals waived him in August 2009. He got another NFL tryout in the spring of 2010, with the New York Jets. He was rebuffed, this time after only one practice. That was a body blow.

"It was a joke," said Lucky, his volume rising. "I got called out to their rookie mini-camp. I'm balling out like I do. I'm taking a ton of reps in practice. But they told me they were looking at someone from a Division II school. I was like, 'Wow.' I was at a loss for words."

That's right, Lucky, the 2005 five-star recruit who enjoyed a nice career as a running back at Nebraska, was waived in favor of a D-II player, without receiving a fair chance to win a job.

Lucky long since has healed mentally. He seems at peace. The big thing is, he feels wanted. He is the face of the Haymakers franchise, figuratively and literally. His face is on team posters you see around town. He looks fit and strong, both on the poster and in person. He could be a bit guarded and distant as a Husker, at least around media, but he seems more at ease now. He smiles and laughs easily.

He seemingly has embraced his prominent role.

"He has a lot of leadership qualities," said Haymakers head coach Dave Brumagen. "And just having him here helps with our team's identity in proving that we're here, we're real and we're going to stay."

Haymakers headquarters is two rooms in the basement of a building in the downtown Haymarket district. Yeah, it's a long way from the NFL.

Never mind the NFL, though. The 26-year-old Lucky's hope is simply to move to a higher level of football, be it the Canadian Football League or Arena league. Granted, the NFL remains his dream. He's still on the chase. But he knows the odds are against him.

In that regard, Lucky is a cautionary tale. With five stars in recruiting comes the weight of expectation. In Lucky, thousands of Nebraska fans saw the next Johnny Rodgers or Mike Rozier or Ahman Green — pick a game-breaker. Back in 2005, the NFL almost seemed a given for the former North Hollywood (Calif.) High School superstar.

Lucky's toned-down expectations are evidence of his maturity. After 30 minutes with Marlon, it becomes clear the unassuming kid from California has become a man — a young man who has experienced his share of ups and downs.

"The NFL isn't one of my highest priorities like it used to be in college or before college," he said.

Perhaps you saw Lucky on the HBO reality series "Hard Knocks." In one episode, a Bengals official tells Marlon that he is being placed on waivers, to pack his bags. Lucky saw it coming, he says now. He made it through two preseason games but says he didn't get the playing time he deserved. He was sixth among seven running backs in preseason camp. So, he had to go.

"It kind of hurts when you put all your effort into something and you get it taken away like that," Lucky said this week. "I've had it done to me twice. It's heartbreaking. But I knew I had to move on."

Lucky kept training. He had a brief stint with the New York Sentinels of the United Football League. He spent some time back home in North Hollywood. He underwent surgery on a foot injury. He returned to Lincoln and finished his bachelor's degree in sociology. The academic folks at Nebraska are, in a word, marvelous. They pushed Lucky to the finish line. He can't thank them enough.

He works in a warehouse in Lincoln but considers it a temporary gig. "Just keeps me busy for now," he said. "It's not a career."

As for his playing career, he could see himself "balling" until he's 30. Again, he's realistic. His body has absorbed hits since he was 5. But he's ready for more. He looks forward to Saturday night, when Lincoln plays an exhibition against the Nebraska Danger in Grand Island.

He'll soon feel the nerves again. Athletes get addicted to those nerves. What's more, Lucky enters unknown territory — this is his first go-round in arena football.

The indoor game is eight-man football with dasher boards instead of a sideline. The Lincoln team has some proven college talent, including ex-Huskers Antonio Bell, Cortney Grixby and Andre Jones, among others.

"The arena game is fast and quick," Lucky said. "Basically, you have to get upfield fast because everybody is coming downhill fast at you. It's challenging. But I love challenges."

He is genuinely thankful for the opportunity.

"After college, nobody gave me a legitimate chance," he said. "But I feel wanted here."

The proof is on the poster.

The Lincoln Haymakers will kick off their inaugural season this Sunday in Sedalia, Mo., against the Mid-Missouri Outlaws.

The Lincoln Haymakers' home debut didn't go quite as planned as the arena football team's offense fell flat in a 42-20 loss.

Steven M. Sipple: Recruiting season has its share of turnoffs

It's disturbing enough that we fool ourselves into believing the hyperbole about certain college football recruits. Perhaps worse is players believing it themselves. Steven M. Sipple asks if you can blame them for feeling entitled to playing time.

If anyone can put Braylon Heard's situation in perspective, it's Damon Benning. From 1993-96, he ran for 1,562 yards, but essentially never became "the man." He stuck it out, but understands why Heard appears set to transfer, Steven M. Sipple writes.

Marlon Lucky is one of the star players for the first-year Lincoln Haymakers.