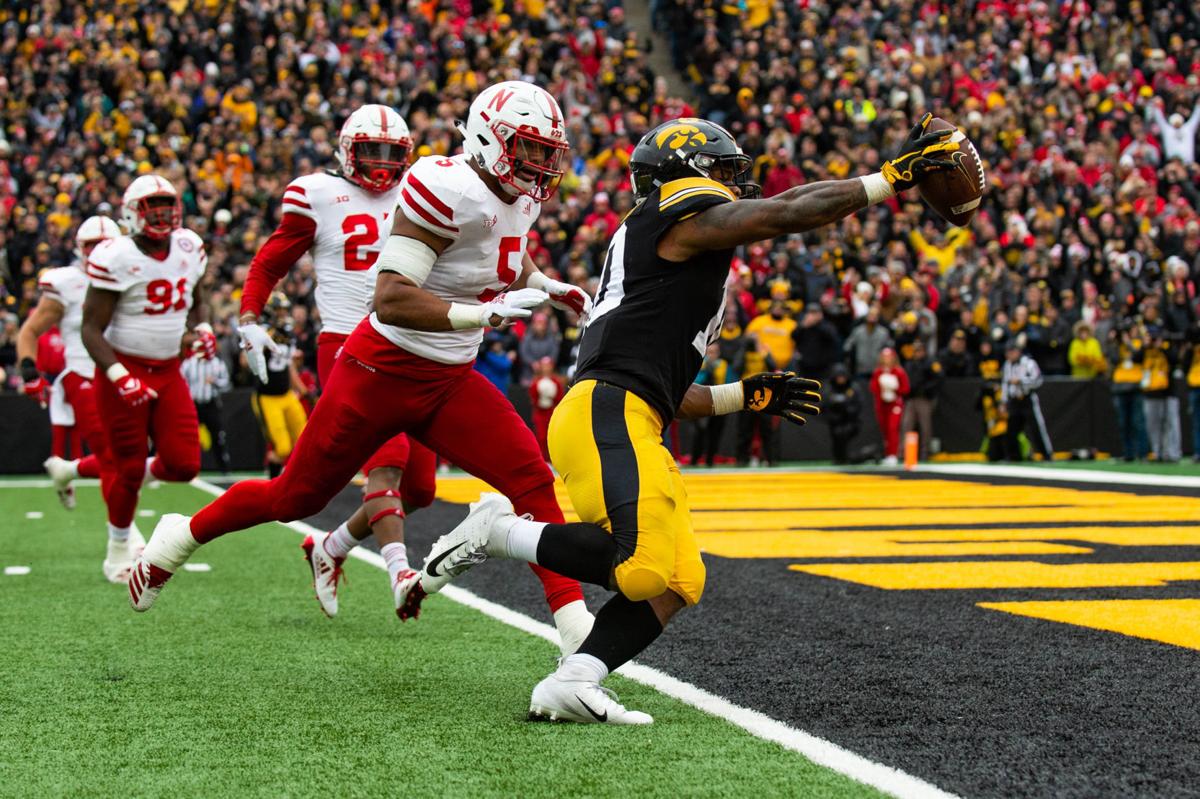 Iowa running back Mekhi Sargent runs into the end zone past Nebraska's Dedrick Young II for a touchdown last November at Kinnick Stadium. 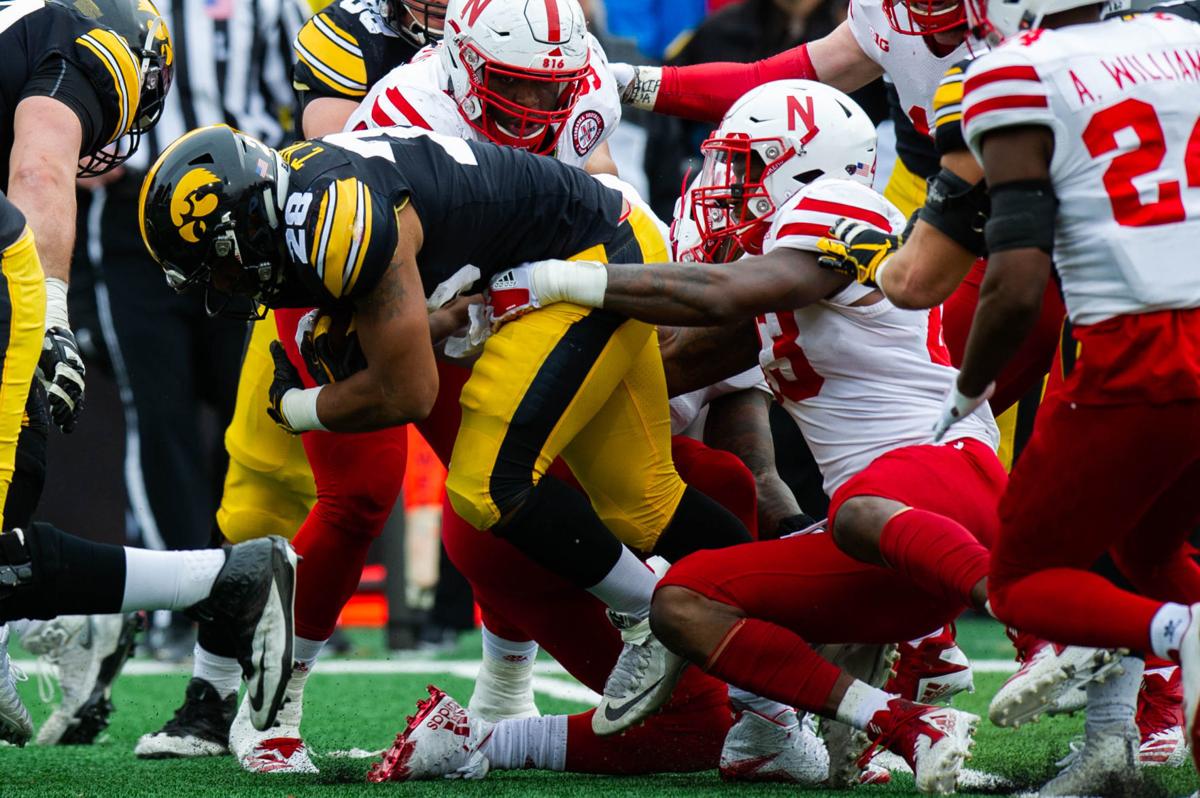 You can imagine the Iowa football coach cracking that smile late in 2014 when Nebraska fired head coach Bo Pelini. Stay with me here. The Huskers had just beaten the Hawkeyes for the third time in four years under Pelini. Then came the quote that never seems to go away.

“Our kids showed great character and resiliency in a tough environment, so it did play a factor,” said then-Nebraska athletic director Shawn Eichorst, referring to Nebraska's 37-34 overtime win against Iowa in November 2014 and whether it made it harder to fire Pelini with a 9-3 record. "But in the final analysis, I had to evaluate where Iowa was.”

Wonderful. Just wonderful. Eichorst went on to hire an offensive-minded head coach from the Pac-12. If Ferentz at that moment grinned and told his assistants, "OK, this is good news, fellas," I would completely understand. Because look at what's happened since 2015: Iowa is 4-0 against Nebraska and has averaged 6.0 rushing yards during that span compared with NU's paltry 3.5.

As Nebraska struggled to find its way as a program, Iowa hammered away on its border rival, outrushing it in five of the past six meetings — and, yes, winning each of those five games.

The rushing numbers are merely one statistical measure, but it's clearly a telling one in this discussion.

If you're a Nebraska fan who used to poke fun at Iowa's often methodical style of play, you've been rendered silent — because Iowa has methodically pulverized Nebraska during most of the past half-dozen years.

As the Husker program's leader, second-year head coach Scott Frost can't afford to get caught up in what's happened in the recent past of this series. He has to keep his full attention on trying to wrestle down the Hawkeyes, No. 17 in the College Football Playoff poll, at 1:30 p.m. Friday in Memorial Stadium.

"Iowa's probably no different than a few teams that have been getting the better of Nebraska lately, and that's what we're here to try to fix," Frost said earlier this week.

Oh, that Ferentz grin. I can just see it coming to his face as he ponders the last three games against Nebraska in particular. As you consider those contests, the conversation gets sort of weird. Iowa didn't even have strong rushing teams in those years, and still waylaid NU on the ground.

"I bet their practices are like a blood bath," former Nebraska defensive coordinator Mark Banker said following the 2016 game.

Yeah, Ferentz probably grinned when he heard that quote.

Iowa this season ranks only 101st nationally in rushing offense, averaging 131.7 yards, and just 95th in total offense. But you can bet the Hawkeyes have the Husker defense's attention. If the Blackshirts' focus wanes this week in practice, perhaps Frost can provide a quick lesson on the series' recent history.

Nebraska veteran defenders have to be tired of listening to this stuff — tired of getting throttled by Iowa even in years when the Hawkeyes were otherwise a pretty ordinary offense.

Bottom line, Iowa has played with a hard edge in this series. A very hard edge. Nebraska? Not so much.

NU inside linebacker Collin Miller sounds as though he fully understands that winning Friday could be largely about slowing Iowa's run game.

"Iowa's a very disciplined team," he said. "They do everything the right way. Their coaches tell them what to do, and they do it the correct way."

The Hawkeyes — 8-3 this season, including 5-3 in the Big Ten — aren't nearly as potent on the ground as the Wisconsin rushing attack that churned out 320 yards (7.1) in Lincoln. Ferentz's crew has no backs in the realm of Jonathan Taylor. Not even close to it.

However, "They do a lot of things that Wisconsin does, a lot of the runs," Miller said. "They know that the stretch is their No. 1 run. So, I mean, if you stop the stretch and make them pass the ball — get them in second-and-8 or third-and-7 — it should go pretty good."

Nebraska (5-6, 3-5) ranks 87th nationally in rushing defense, good for just 10th in the Big Ten. As Frost works hard to improve strength and toughness in his program, he can use Friday's game against Iowa as yet another way to measure progress in those areas.

I'm guessing Ferentz would grin at that sort of thought.

Red Report: Noa out for remainder of season; no running for Rahmir; the return of Waldoch; Gaylord seeking sixth year

Nebraska coach Scott Frost announced Husker wide receiver Kanawai Noa is out for the remainder of the season (torn meniscus), plus gave insight on the NU-Iowa rivalry ahead of the all-important Black Friday battle.

Steven M. Sipple: Frost asks Huskers to avoid being 'wusses,' and they respond quite well

Nebraska showed virtually zero wuss qualities as it snapped what was in many ways a dreadful four-game losing skid. The Huskers also kept alive their bowl hopes.

Minnesota and Wisconsin rolled into a collision course on Saturday and are in the top three in the latest Big Ten Power Rankings.

Husker Extra Podcast: Charting a path to a Husker victory over Iowa on Black Friday

Parker Gabriel shares the latest about the upcoming Iowa game on Nov. 27, 2019.

Iowa running back Mekhi Sargent runs into the end zone past Nebraska's Dedrick Young II for a touchdown last November at Kinnick Stadium.