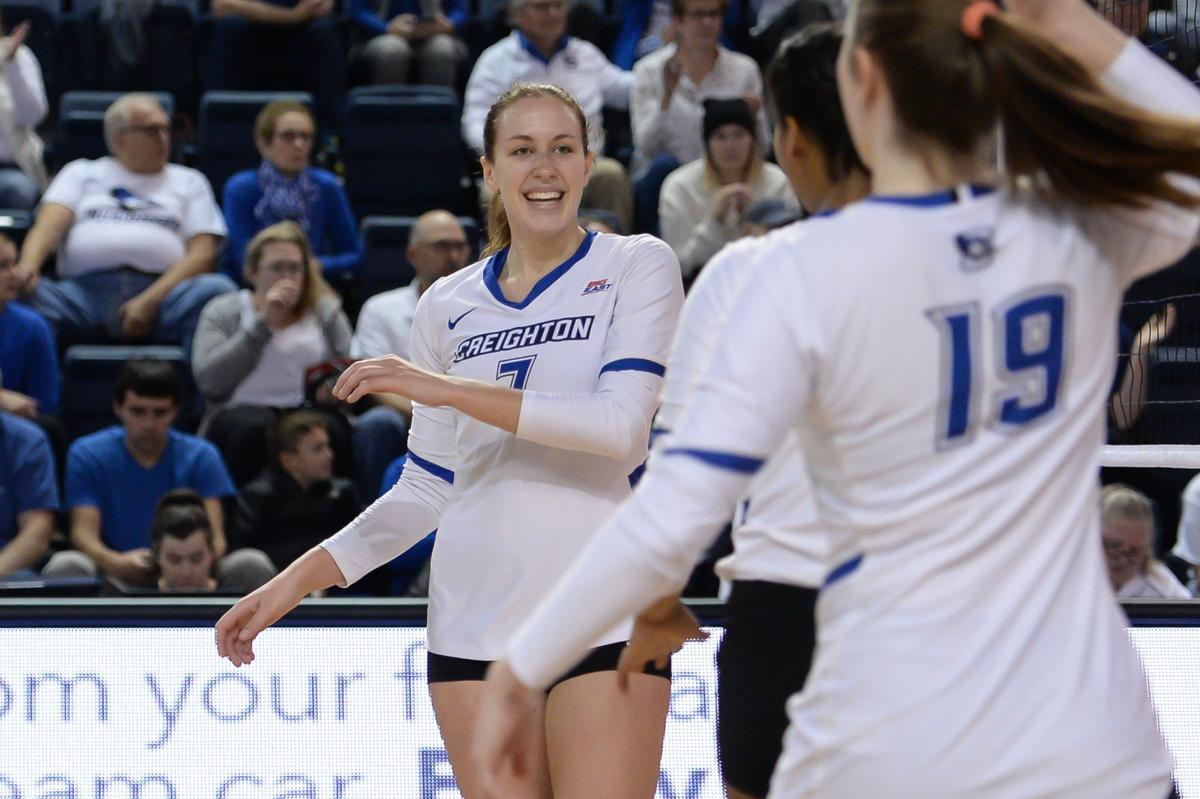 Creighton junior Jaela Zimmerman celebrates a point with her teammates during a 2019 match against DePaul. 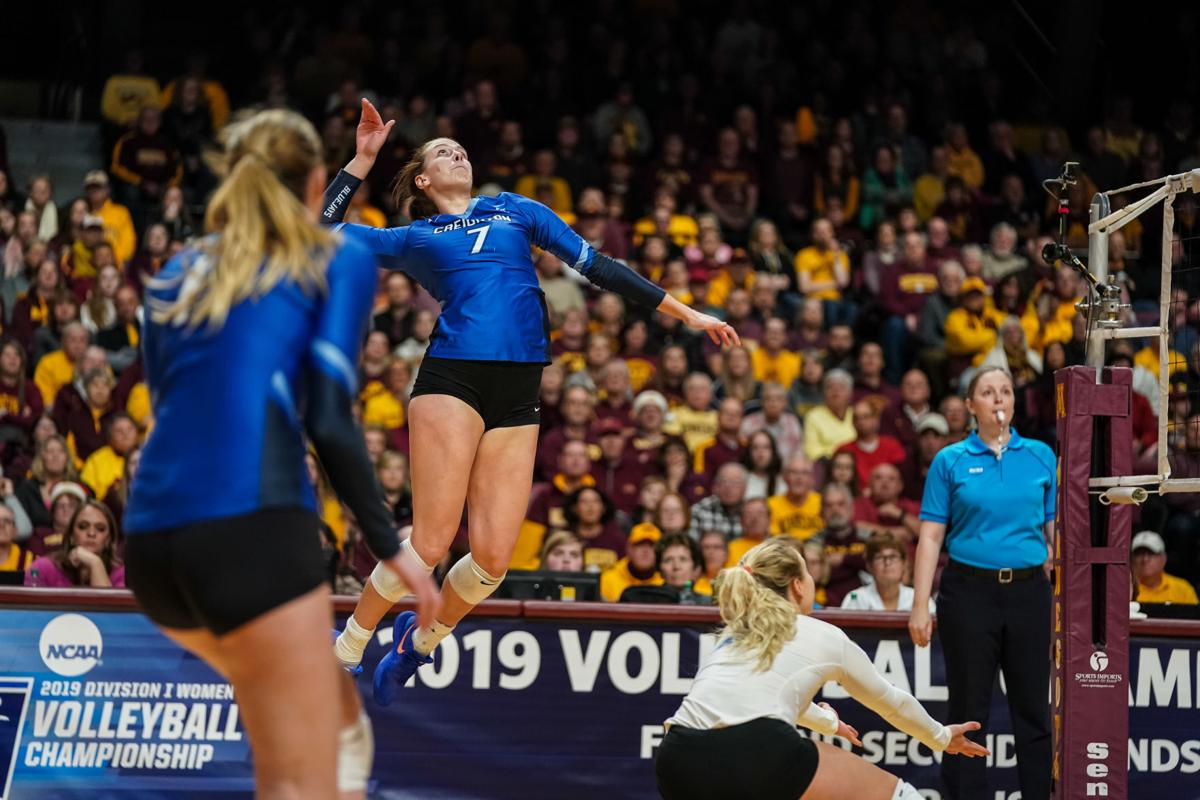 Creighton's Jaela Zimmerman, a Malcolm graduate, goes up for a kill during a 2019 NCAA Tournament match in Minneapolis.

Home seems to be wherever Creighton’s Jaela Zimmerman has a volleyball and a court.

Though Zimmerman and the Bluejays will be in their own backyard for the NCAA Tournament in Omaha, they won’t be sleeping in their own beds.

Creighton, like all other 47 teams in the Big Dance this year, will be staying at a hotel in Omaha due to NCAA Tournament guidelines.

But that won’t stop Zimmerman, 6-foot-2 outside hitter, from having a little fun along the way.

“We’ve already bought a golf mat that we are going to do,” Zimmerman said. “Everyone’s bringing games, so I think the balance of having fun off the court and being focused on the court is what is going to help us.”

And if you want to face Zimmerman in Mario Kart on the Wii rather than her hard-swinging arm that has led to 182 kills this season, well, good luck.

The Lincoln native has been relied on in many capacities, both on and off the court. She’s a leader by trade, dating back to her days at Malcolm under coach Amber Dolliver, where she set school records for kills in a season (568), career (1,437), match (39) and per set (6.3). Zimmerman was named honorary captain of the Journal Star Super-State first team as a junior and senior.

“Jaela is a short memory-type player, for sure,” Creighton coach Kirsten Bernthal Booth said. “Those are the best players; the ones that aren’t going to let something rattle them. She has a growth mindset and is always learning. (Zimmerman) has stepped up for this team in big moments, whether it be passing or a big block. Again, she and Keely (Davis) carry a ton of load for us. ... Both of them have proven that they cannot maybe have their best game in passing or hitting or whatever, but yet be great someplace else. Those players are special.”

For Zimmerman, leadership has come from every direction along her path.

“I think I’ve just had a lot of help from lots of people,” she said. “Teammates, players, other players and coaches; our team psychologist has helped me a lot with the next-play mindset. I think that just radiates to other players and helps them, as well.

“We all kind of help each other. Keely and I really help balance off each other. If one of us is struggling, the other one is stepping up. Just experiences I’ve had throughout has helped me become a better leader.”

And with college volleyball's biggest stage just a stone's throw away from home, Zimmerman can finally say one of her biggest goals will come true.

“Just going to the NCAAs is something I've always dreamed of,” Zimmerman said. “I never really thought about it being in Omaha, but I knew there was a chance. It's going to be kind of cool just to be right down the road and be someplace we've played before in club tournaments and then playing Nebraska there. It's just going to kind of be cool to now have the NCAA Tournament and just mark that off my list of things I've done in Omaha.”

Creighton will play Morehead State in the first round Wednesday in the convention center of CHI Health Center Omaha at 2:30 p.m.

From Terry Pettit to current coaches, many are sharing their frustration about NCAA's handling of volleyball tournament

The NCAA, and ESPN, now is hearing criticism — from coaches, former coaches, analysts and more — about the upcoming 48-team volleyball tournament.

Each of the NCAA volleyball tournament's first- and second-round matches (April 14-15) will be broadcast on ESPN3, and for the third round, fo…

Sparked by Opfer, No. 10 Concordia finishes off Xavier to advance at NAIA Tournament

For the second year in a row, the Concordia volleyball team is headed to the final site for the NAIA Tournament.

Stop-and-go season that started in fall has offered challenges for Concordia volleyball team, but also a reward

Ben Boldt has been coaching volleyball for a while now, and he knows what it takes to build a program. Heck, the Hickman native grew up in a s…

Concordia reached the NAIA quarterfinals for the first time in volleyball.

The Husker recruit was named the Journal Star's Super-State honorary captain and also was named the fall player of the year by VolleyballMag.com.

Creighton junior Jaela Zimmerman celebrates a point with her teammates during a 2019 match against DePaul.

Creighton's Jaela Zimmerman, a Malcolm graduate, goes up for a kill during a 2019 NCAA Tournament match in Minneapolis.