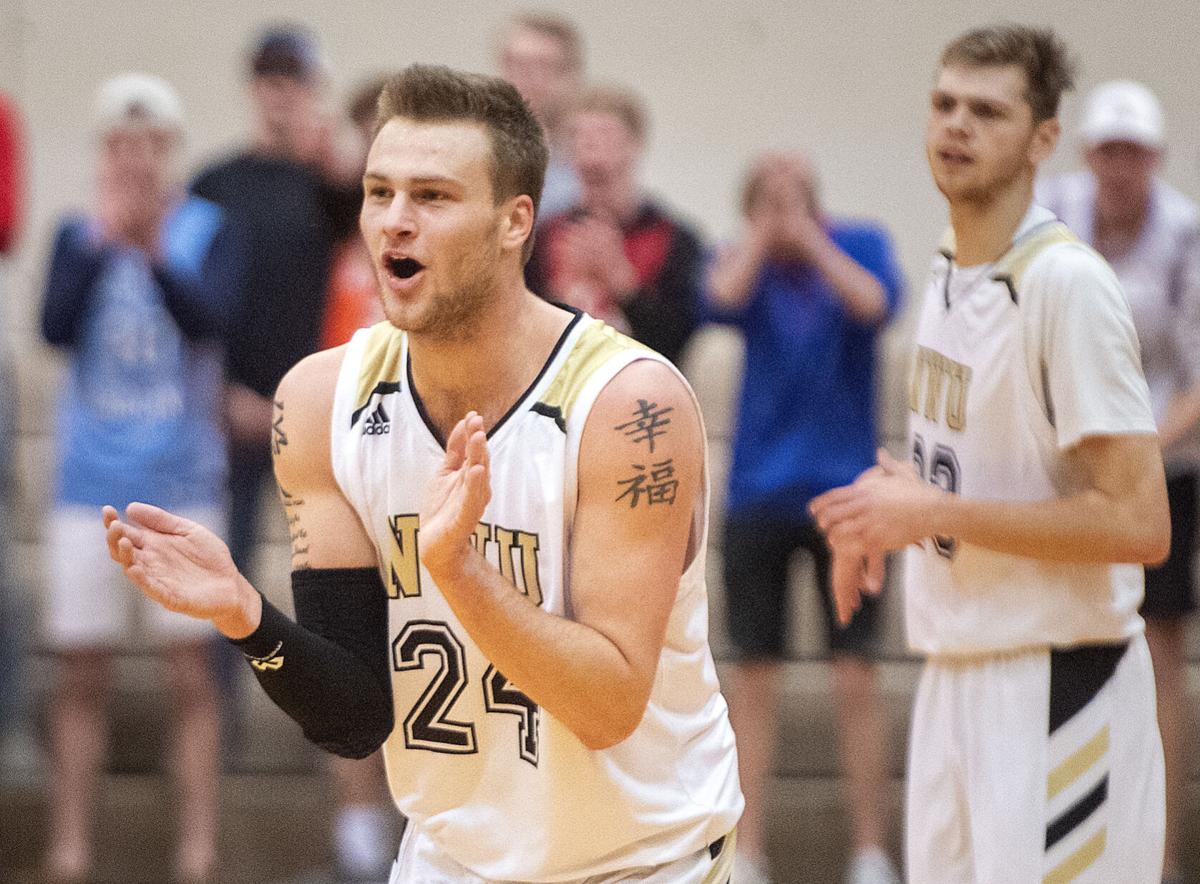 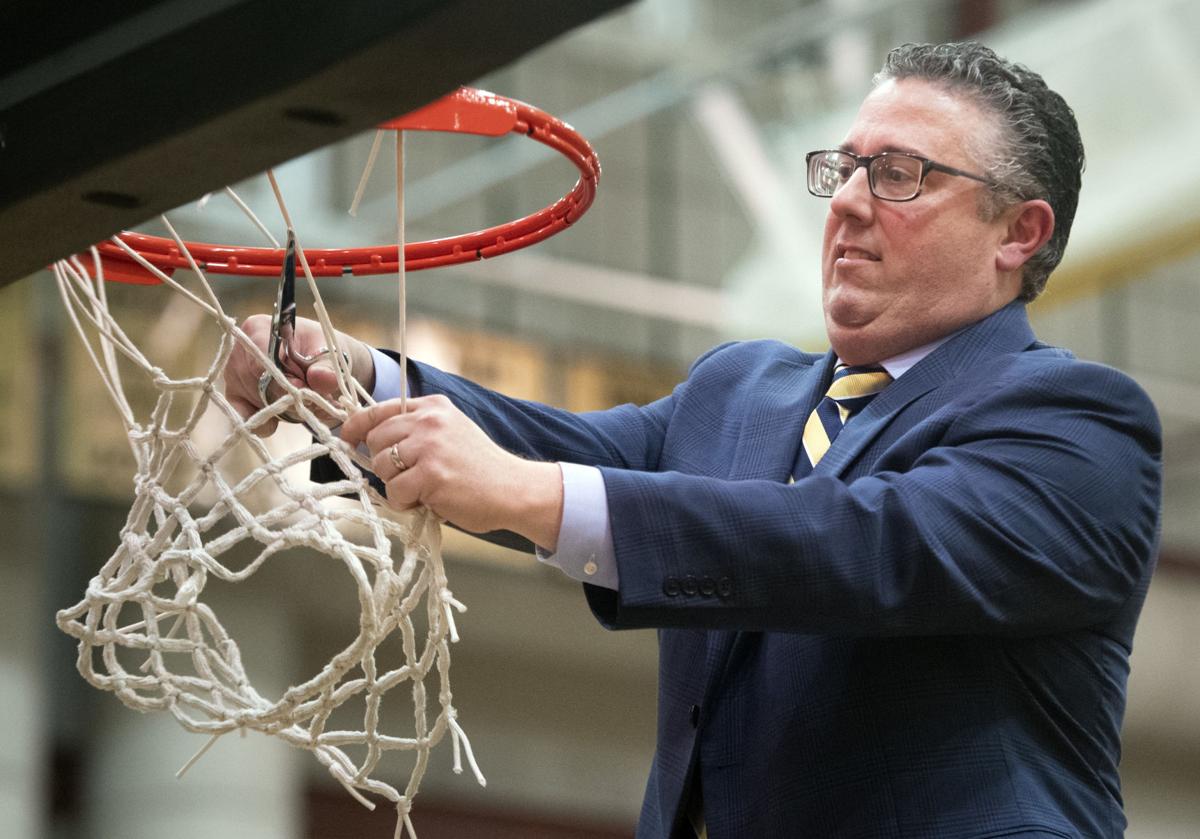 Peyton Priest is the bridge from Nebraska Wesleyan’s recent men’s basketball success to a future that both Prairie Wolves coaches and players hope will be just as bright.

The 6-foot-5 junior guard is the most experienced player returning from a 25-4 team last winter that won its fourth straight American Rivers Conference regular-season title. That team also captured a third consecutive conference tournament crown and reached the second round of the NCAA Division III national tournament for the second straight year.

And while he’s this year’s team leader, Priest hasn’t lost track of those who came before him. Two seniors off last year’s team — All-American point guard Nate Schimonitz and four-year starter Jack Hiller — are among Priest’s roommates, and they both played major roles in NWU’s run to the national championship in 2018.

And they’re already applying the pressure to Priest to keep things going the right direction, even without last year’s top six scorers, who all graduated.

“That started already last March, they joke around a lot,” said Priest, who averaged 6.8 minutes per game last year as a sophomore and averaged 2.6 points per contest.

“Those upperclassmen were great for me my first two years in the program, and it’s going to be a big help for me having people at home who know the Wesleyan offense and defense, guys I can get advice from,” Priest added. “They paved the way for us to make a big run again this year, so I’m excited to get going.”

Because of the COVID-19 pandemic, NWU and the rest of the ARC is just now getting basketball season started, even though preseason practices started as normal in October. The Prairie Wolves open at home Wednesday (5:30 p.m. tipoff) with a game against Buena Vista, which will be considered a nonconference contest.

The Wolves will play eight conference games and will only go outside the ARC once — a home meeting with Rockford on Jan. 31. The conference tournament, which will decide who gets the ARC’s automatic bid to the NCAA Tournament, is scheduled for early March.

With so many new players and very little college basketball experience on the roster, the extra practice time has been beneficial for the Wolves, according to coach Dale Wellman.

“The past couple years, we had experienced guys who knew our offense and defense,” said Wellman, whose team was picked second in the conference in the preseason poll of ARC coaches. “This year, we’ve had to do a lot more teaching, small things we didn’t have to really talk about the last few years. It’s been nice to have some time to do that.”

But Wellman is ready to see how his team, which does not have a senior, compares to the rest of the conference. Wellman said the Wolves could play 10 players in the regular rotation early in the season, but he’s been particularly impressed with what he’s seen so far from Priest and a pair of sophomore guards in 6-1 point Connor Riekenberg and 6-2 shooting guard Josh Rogers.

“Peyton’s waited his turn, and he’s ready to be the leader on the court,” Wellman said. “He’s showing now what he’s capable of and what we thought he could be when we recruited him out of high school. He’s a great shooter who’s expanded his game by getting to the rim and posting up.”

Riekenberg was a three-point shooting specialist as a wing coming out of Lincoln East, but he’s now going to the point with Rogers, a 2019 all-state high school player in Colorado from Arvada West. Rogers is now going full speed after enduring an injury-filled freshman season. He had two surgeries during the offseason to take care of a hernia and ligament damage.

“Connor’s a tough kid who can do a lot more than just shoot,” Wellman said. “He’ll get up in people guarding them, get deflections and then go down low and get offensive rebounds. He just has really good basketball instincts.

“We never saw the real Josh Rogers last year, and now he’s looking like the player we thought he would be out of high school,” Wellman added. “He’s athletic, he’s strong and he’s shooting the ball well right now.”

Rogers played in just 11 of 29 games last season. “It was nice to finally get all of that (the injuries) taken care of and put it behind me,” he said. “I feel a lot better than I did a year ago.”

Riekenberg said he hasn’t played point guard since middle school, and the fact he’s replacing an All-American at that position makes it even more daunting.

“It’s a new challenge stepping into that role, definitely something different for me,” Riekenberg said. “Shooting is one of my strengths, and the point guard in our offense doesn’t dribble as much as point guards in other offenses. I’ll still be able to get shots off and do and what I do best.”

Home NWU games at Snyder Arena are currently closed to students and general fans. Each player and coach from both teams are allowed two spectators into games. Masks and social distancing will be required for all spectators. All NWU games will be livestreamed on Wesleyan’s at nwusports.com.

Concordia's Kent puts on a show — for limited crowd, of course — in Bulldogs' hoops win over Doane

The former Crete all-state guard made sure his parents enjoyed their livestream of Concordia's win over Doane on Monday.

The Nebraska Wesleyan men’s basketball team has put the start of its season on hold.