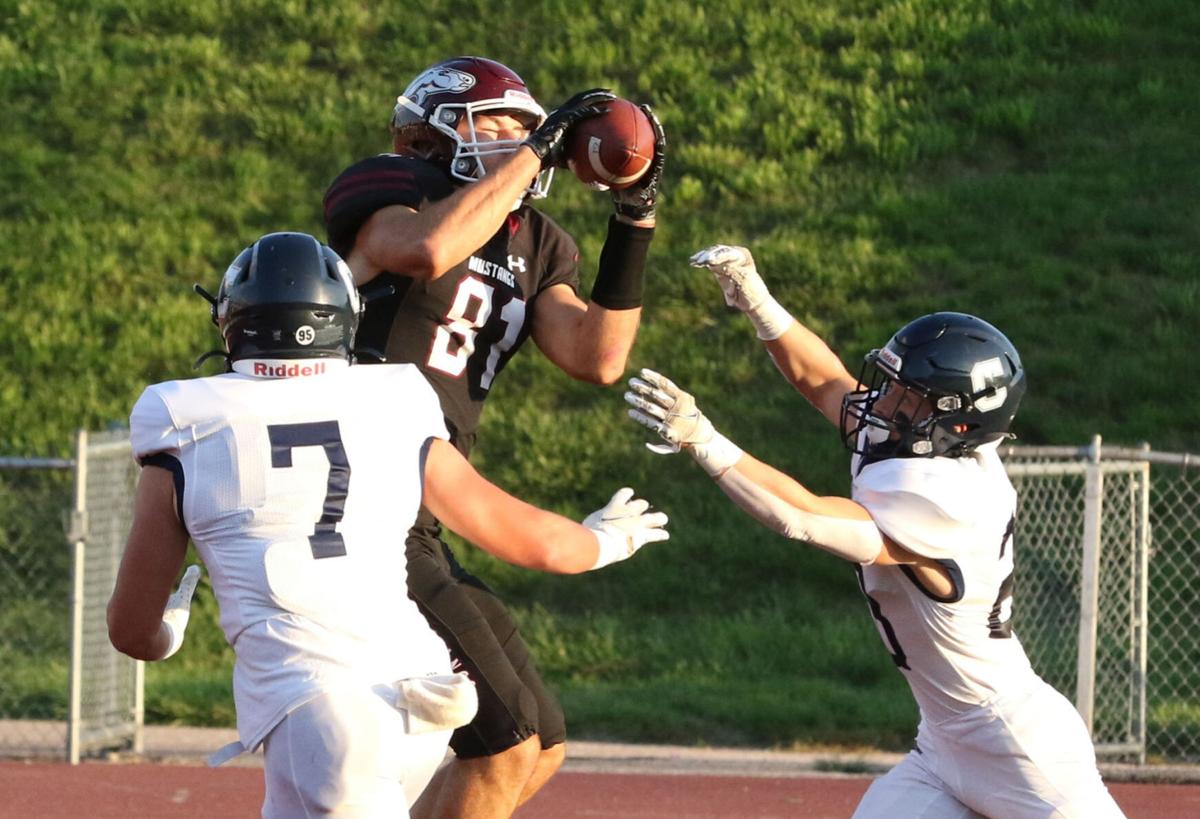 Morningside wide receiver Reid Jurgensmeier hauls in a touchdown over a pair of Concordia defenders in the Mustangs' season-opening victory. 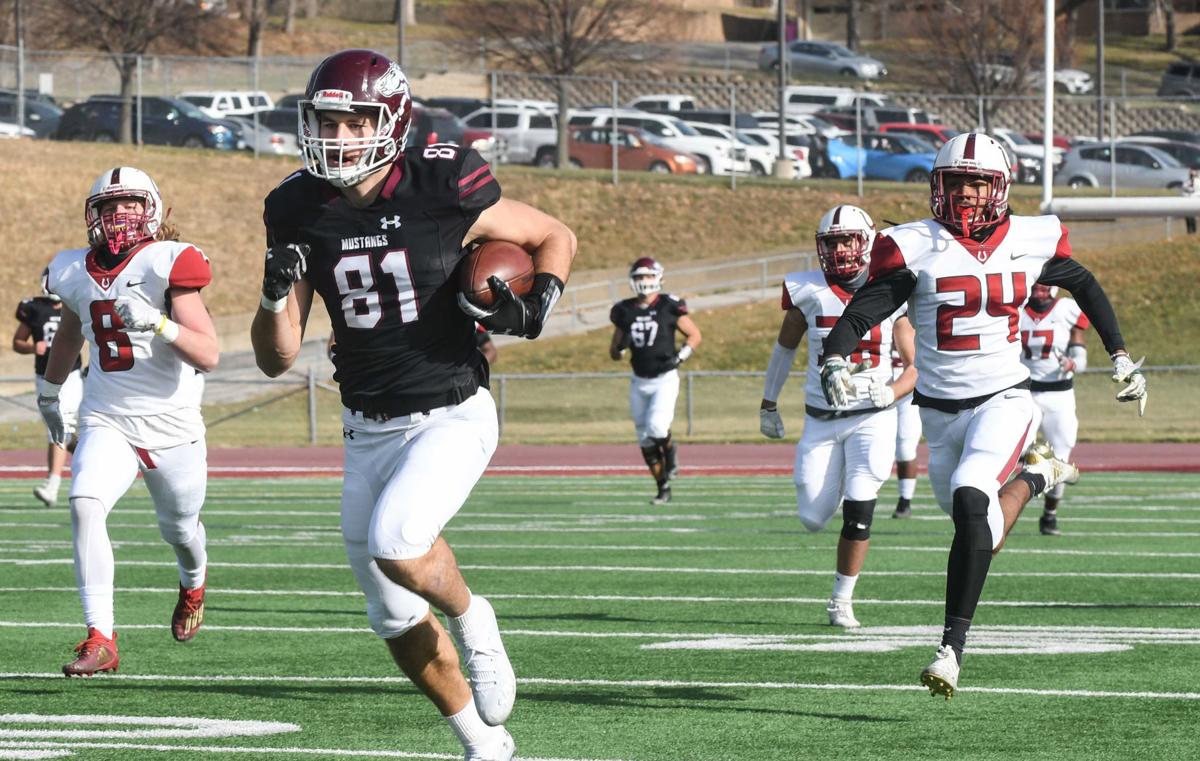 Morningside wide receiver Reid Jurgensmeier races to the end zone in a win against Hastings earlier this season.

Slot routes can lead a wide receiver into intimidating territory. Try to catch a ball over the middle and be prepared to come face to face with a safety or middle linebacker eager to deliver a pop.

This is their yard.

But Reid Jurgensmeier can be intimidating, too. He stands at 6-foot-3 and 210 pounds, and Morningside, one of the top NAIA football programs in the country, likes to send him into the danger zone to haul in passes.

No. 17 Central uses methodical attack to power past Nebraska Wesleyan

Once fifth on the depth chart, dual-threat quarterback TJ Davis has Lopers on the rise

“Lot of over-the-middle stuff,” the Bishop Neumann graduate says. “Kind of a Travis Kelce-type role as far as my route running goes. We like to have a big guy over the middle, an easy target for the quarterback to find.”

Jurgensmeier is not your typical slot receiver. Remember, he’s 6-3.

Heck, he may even be the tallest slot receiver in the NAIA.

“I don’t know if they keep a stat on that one, but there might be a pretty good shot,” said Jurgensmeier, who continues to produce at a high clip.

At Bishop Neumann, Jurgensmeier was used as an outside threat in the Cavaliers’ triple-option attack. Yeah, Neumann liked to run the ball, but they had Noah Vedral at quarterback, and he was more than capable of airing it out.

When Jurgensmeier got to Morningside, the Mustangs saw an opportunity to boost their passing game by moving him to the slot. Instead of relying on a speedy, smaller receiver in that role, the Mustangs were thinking big.

“I had no concept how that would work as far as being in the slot,” Jurgensmeier said. “A lot of people probably just think the wide receiver is the wide receiver, but it’s different when you got a corner up over you versus a safety or a linebacker.

“(You) got a lot of big guys in there trying to take your head off, but it’s a lot of fun.”

Using his size to outmuscle safeties and outlength corners, the senior has been one of the most consistent and productive offensive threats in the country. Jurgensmeier hauled in 74 balls for 1,409 yards and 20 touchdowns last year, and earned first-team All-America honors. A year earlier, as a junior, he caught 69 passes for 1,377 yards and 17 scores.

He’s on pace for another big year. Through three games, he has 20 catches for 334 yards and three scores. He averaged 20 yards a catch two seasons ago, 19 last year and 16.7 this year.

Delivering the throws is senior Joe Dolincheck, one of the NAIA’s top gunslingers. The Bellevue West graduate has 9,220 career passing yards, including 969 (average of 323 per game) this year.

“You know the ball is going in the right spot when he’s throwing,” Jurgensmeier said. “He’s got all the confidence in the world for himself and we’ve all got confidence in him. It just makes it fun to go out there and know that he’s got your back and he’s going to make plays for you.”

Because college athletes were granted an extra year because of COVID-19, Jurgensmeier is one of several seniors on the Morningside roster back for a fifth season. He called the decision a no-brainer.

A loss in the NAIA playoffs last spring for the two-time defending national champions only solidified that call.

“Most of our decisions (were) made before that,” said Jurgensmeier, who will graduate in December with a degree in business finance. “If the decision hadn’t been made that definitely would have influenced it. That left a pretty bitter taste in our mouth and we were able to use that for most of the summer and still even now, using that as motivation to not let that happen again.”

Morningside, ranked No. 3 in the NAIA poll, is rolling again. The Mustangs (3-0) scored 63, 56 and 56 points in their first three games. Tougher tests await, including one Oct. 2 against a Midland team that pushed No. 2 Northwestern.

Nebraska-Kearney is 2-0 and ranked, but another challenge looms with a clash against Washburn.

After making his first start in the Prairie Wolves' only game of the spring season, Carter Terry has been on a tear in the fall season.

State College Rundown: No. 16 UNK has a short but wild history with Saturday's opponent

Nebraska-Kearney and Central Missouri are going different directions this season, but if history is any indication, throw out the records Saturday.

Dalton Tremayne's 92-yard touchdown run put the game out of reach in a Midland victory, which leads our roundup of state college action.

Twist of fate — or should we say kick of fate? — has Quiñonez leading Midland football with his leg

Jared Quiñonez was set to pursue a law degree at a university in Mexico. Then, with the season less than two months away, his phone chimed.

Morningside wide receiver Reid Jurgensmeier hauls in a touchdown over a pair of Concordia defenders in the Mustangs' season-opening victory.

Morningside wide receiver Reid Jurgensmeier races to the end zone in a win against Hastings earlier this season.