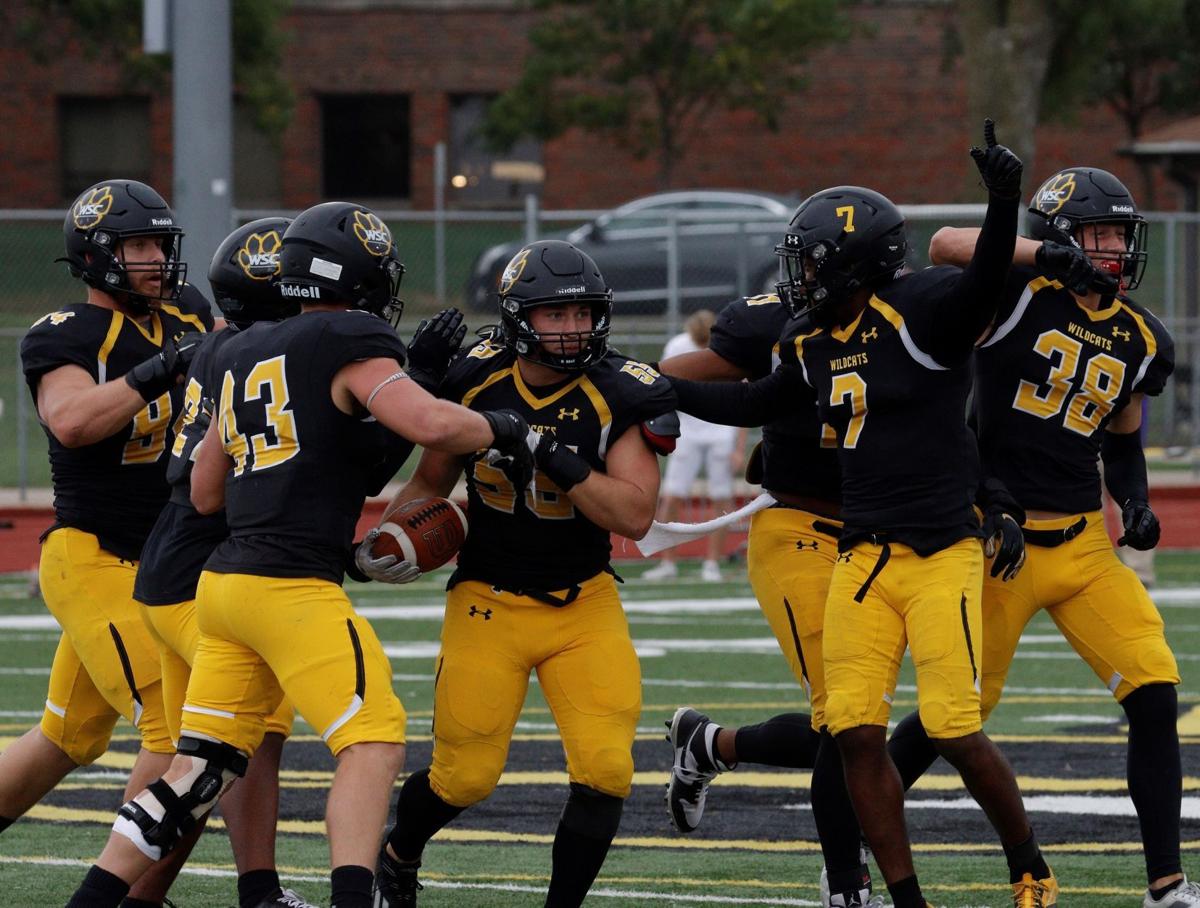 Wayne State defensive players celebrate a turnover in a victory against Winona State earlier this season. 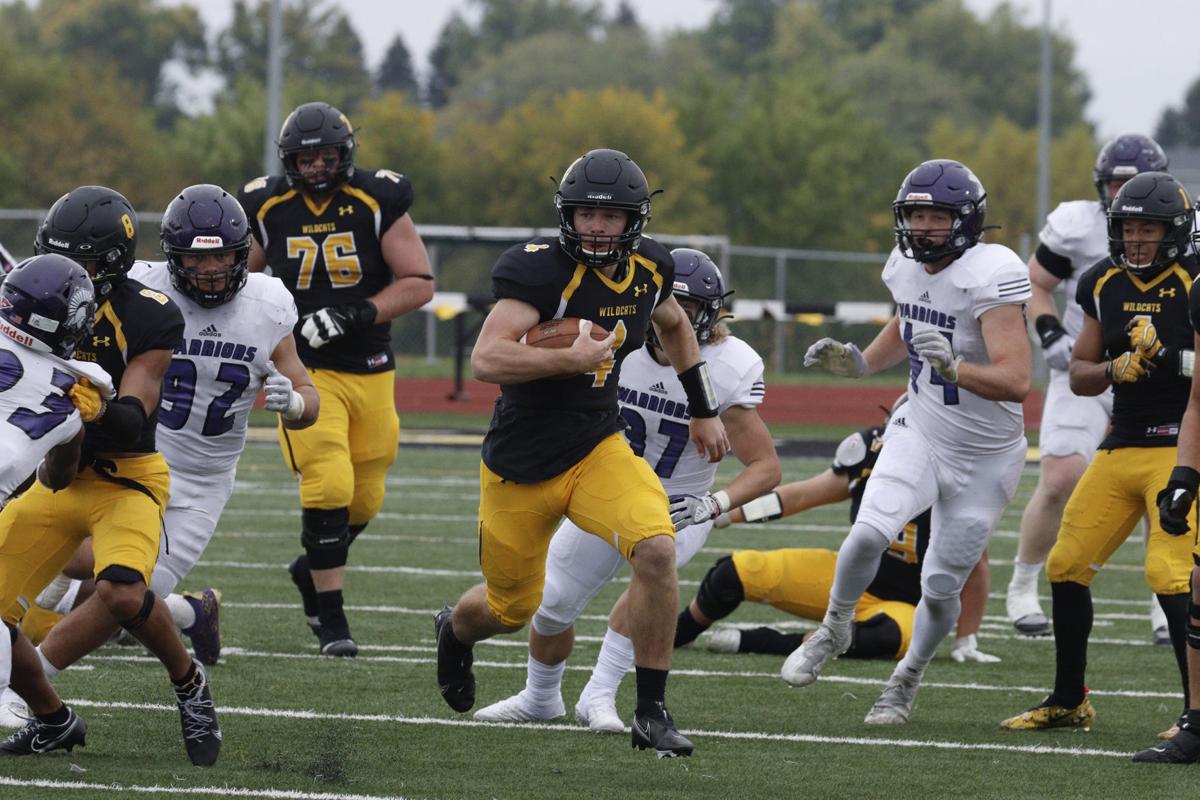 Before the season began, the Wayne State football team was picked to finish fifth in the seven-team South division of the Northern Star Conference.

Six games in, the Wildcats are sitting in first place, have defeated three ranked teams in a row and are No. 23 in the Division II Coaches Poll for the first time since 2011.

It’s a start that not many saw coming, besides head coach John McMenamin.

Hired in 2019, John McMenamin hasn't yet coached a game for Wayne State. That changes Thursday

McMenamin took over the program in 2019 but first toed the sideline in 2021 due to COVID-19 wiping out last season.

In his first crack at being a head coach at any level, he has guided his team to success that Wayne State has not seen in a decade.

“I have not really processed that at all and thought about it yet,” he said. “What I am excited about is the kids playing the way that they are and earning that recognition.”

The spirit around Wayne is reaching heights no one has seen in recent years. McMenamin noted that "winning is contagious" and said the campus and town have really picked up on it.

“The buzz around campus is really good and a lot of people are noticing how we are doing,” quarterback Nick Bohn said. “I think it’s a good thing to be noticed around your campus, but we are trying to stay humble, keep winning and proving people wrong.”

A big key to the Wildcats’ success in recent weeks has been the emergence of the youth. There are four freshmen starting on defense and five on offense, including Bohn.

He scored three touchdowns in the fourth quarter to help his team dig out of a 24-7 deficit to beat Minnesota State.

Freshman linebacker Alex Kowalcyzk was the NSIC Defensive Player of the Week after 11 tackles in the win.

“They don’t buy into the narrative of what you are supposed to be,” McMenamin said. “They don’t know any better. ... They just play hard and never give up.”

Combine the underclassman and the experienced leadership and Wayne has what McMenamin says is the biggest reason for the memorable start: unity.

“We are an aligned group,” he said. “They are united in the line of, ‘All for one, one for all.' We may not be the most talented in any of these games and we are not the biggest. But, we are disciplined and we are aligned, and that has taken us a long ways.

“That is what pleases me and what I’m the most proud of. There is no finger-pointing. They play for each other, and they play hard.”

According to Bohn, the leaders in the locker room have kept one message to the rest of the team to sustain this run.

“They keep telling us to keep staying focused and it’s a long season,” Bohn said. “I mean, we have won a few games, but we still got a lot more to prove.”

Jacob Grumann returned a fumble 22 yards to give Nebraska Wesleyan a defensive touchdown for the second consecutive week.

Concordia finds its starting QB in McGarvie, who totals 5 touchdowns in win over DWU

Once envisioning being a starter on JV, DJ McGarvie has exceeded that, accounting for five TDs and more than 300 yards of offense Saturday.

Franzen was named Doane football coach in 2007 and led the Tigers to back-to-back NAIA playoff appearances in 2015 and 2016.

Ready for some basketball? Here's where preseason polls peg both men's and women's teams in the GPAC.

'What a defensive effort today': Opportunistic Concordia gets its hands on six INTs in win over Midland

Concordia picked off six passes — two potential touchdown savers — in a 21-7 victory against Midland on Saturday at Bulldog Stadium.

Progression, culture and a fun offense to watch: Why UNK football is the talk of the town

The games have been getting bigger each year for UNK since Josh Lynn was named coach in 2017, none bigger than Saturday's clash.

State college football rundown: Peru State's streak, defense will be put to the test this weekend

Peru State has gone nine quarters without giving up a point. Can its defense come up in a big way against NAIA No. 4 Grand View?

Wayne State defensive players celebrate a turnover in a victory against Winona State earlier this season.