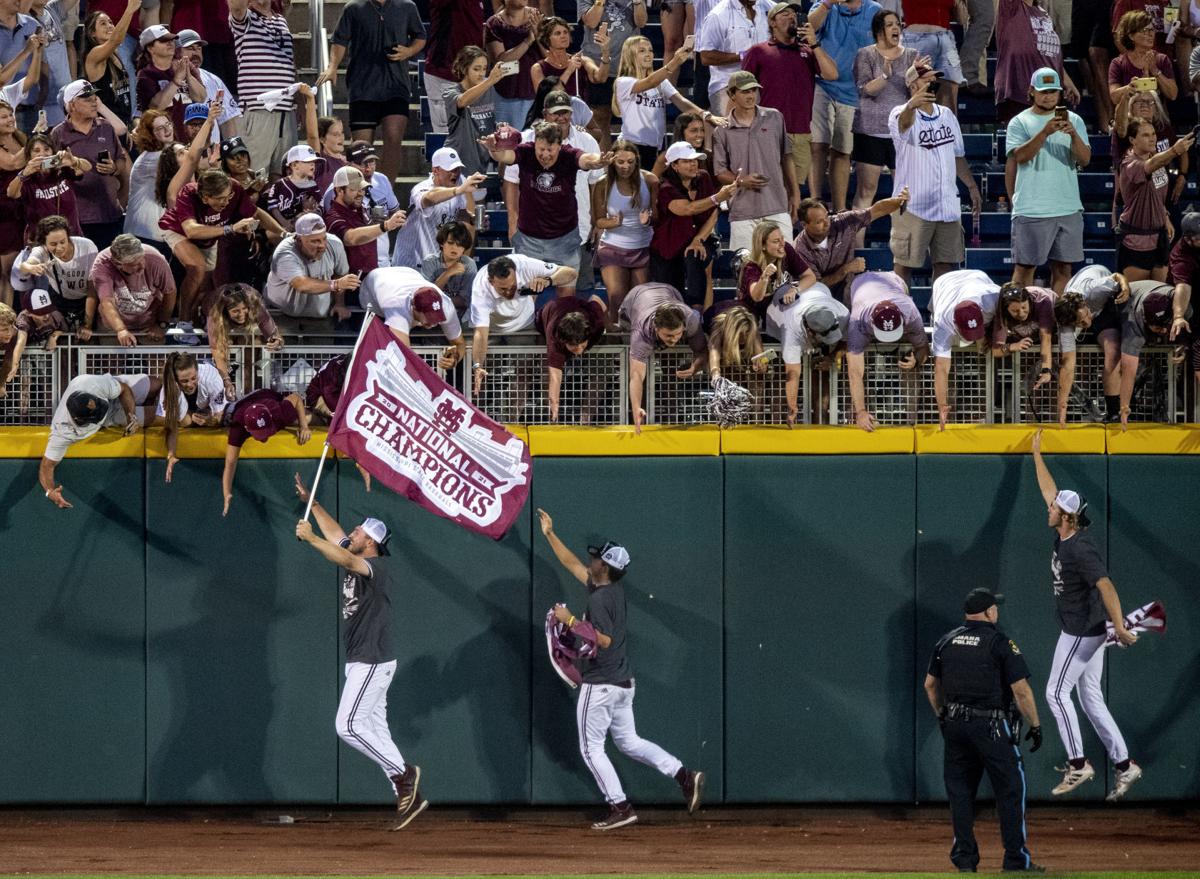 Mississippi State players celebrate with their fans in the outfield after defeating Vanderbilt 9-1 on a combined one-hitter during the College World Series championship game Wednesday at TD Ameritrade Park Omaha. 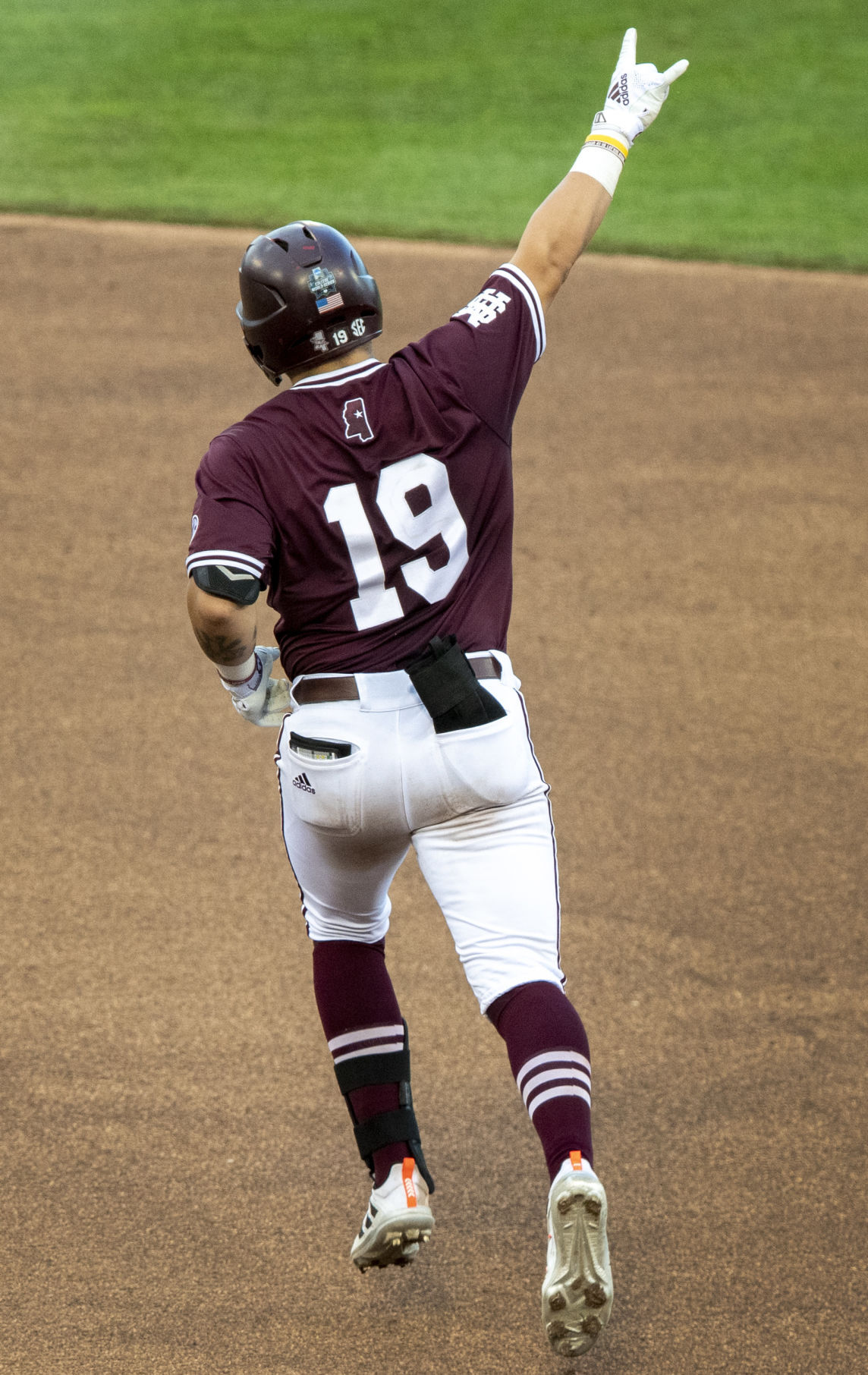 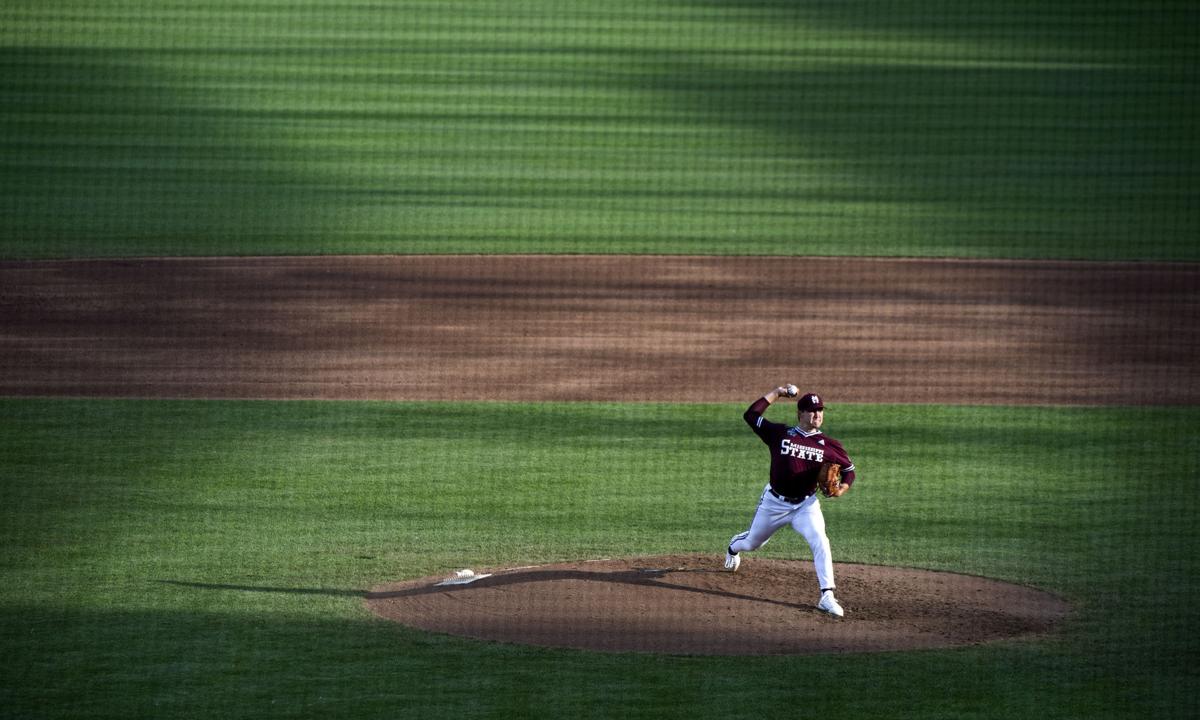 Mississippi State starting pitcher Will Bednar (24) had his moment in the sun as he pitched six no-hit innings against Vanderbilt on Wednesday at TD Ameritrade Park Omaha.

OMAHA — When did the Mississippi State fans know it was over?

It might have been when the Bulldogs knocked one of the best pitchers in college baseball history, Kumar Rocker, out of the game with five runs over the first five innings Wednesday night.

It might have been when Kellum Clark smacked a no-doubt, three-run homer in the seventh inning. Or it might have been when their own star pitcher, Will Bednar, left to a roaring ovation after six innings of no-hit pitching, only to turn the ball over to the team’s deadly closer, Landon Sims.

For the most confident Bulldog fans, it might have been the game’s opening run. Luke Hancock’s early sacrifice fly served to encourage the thousands of fans who roared, jumped around and refused to so much as sit still with Mississippi State at the plate.

For the pessimists in the crowd, there were no guarantees until the final out, a dribbler to third base that confirmed Mississippi State’s 9-0 win over Vanderbilt, and the school’s first-ever College World Series title.

The school had been close to a national title before — runner-up finishes in the 2013 College World Series, and the 2017 and 2018 women’s basketball tournaments — but the sports-crazy town of Starkville, Mississippi, had never produced a national championship team in any sport.

The names of these Bulldogs will go down in history: Rowdey, Tanner, Kamren, Luke, Logan, Scotty, Lane, Kellum, Will, Brad, Preston and Landon, just to list a few.

“I'm just glad they'll finish as legends,” Lemonis said. “When you go to Starkville, Mississippi, around 20 years from now, they'll be remembered by everybody.”

So will Wednesday, June 30, 2021, which will go down in school history as the day that decades of dreams became reality. It’s when TD Ameritrade Park Omaha truly became “Dudy Noble North,” as many Bulldog fans affectionately refer to the stadium.

A few exuberant Bulldog fans may have tried to join in the postgame ceremony on the field, but the team brought the celebration to them with a lap around the stadium. They waved flags, clanked cowbells and gave out as many high-fives as humanly possible.

Base hits and home runs sent the Bulldog crowd into a frenzy during the game, but the championship performance all started on the mound with Bednar. He allowed zero hits in six innings of work and struck out four while retiring the last 15 batters he faced.

“You need somebody to get hot for you in the postseason, and we had that with Will tonight,” Lemonis said.

“These are the best teammates in the world and best fans in the world by far,” Bednar said. “It’s essentially a home game here, and everything about this place is awesome.”

For Vanderbilt, it was a pedestrian performance that hardly felt indicative of the stage.

Rocker, who Lemonis called “one of the best to ever play in college baseball,” wasn’t at his usual sharpness on short rest. For the third-straight game at the CWS finals, the Commodores managed five or fewer hits. And the final nail in the coffin were three more errors that pushed Vanderbilt’s series total to 13 errors in seven games.

Vanderbilt won’t join the ranks of schools that have won back-to-back College World Series titles, but four CWS finals appearances in seven seasons show how Corbin has built the Commodores into one of college baseball’s most consistent title contenders.

The longest-tenured Bulldog fans couldn’t have watched the College World Series triumph without thinking of hall of fame coach Ron Polk, who led the Bulldogs to eight CWS appearances during a career that spanned 31 seasons.

Now, the Bulldogs may have a new legendary coach on their hands. In just his third year atop the program, Lemonis led a gritty and resilient team to postseason glory.

The celebrations may have started in Omaha, but they’ll continue down south for weeks to come, with nothing standing in the way of the greatest achievement in Mississippi State athletic history.

“I didn't just come back to make the playoffs or make a super regional, I wanted to come back to win a national championship,” senior outfielder Tanner Allen said. “I believed it and we all believed it.”

“(For) all the great players for years after years that have played here, to bring home the trophy is just awesome,” Lemonis said. “…Almost every player who put on the maroon and white, they have a piece of this trophy tonight because it's been built over years.”

With its 'back against the wall,' Mississippi State downs Vanderbilt to set up winner-take-all game for CWS crown

After giving up seven runs in the first inning Monday, a fast start was imperative for Lemonis' group. The Bulldogs just did that.

A ballpark official said the person or persons who used the offensive language left the stadium once security personnel were notified.

A walk around the concourse made it clear the crowd was in favor of Mississippi State. But Vanderbilt exploded early to run away with a win.

'We have to be dramatic:' Pinch-hit walk-off single sends Mississippi State to CWS finals

OMAHA — As Tanner Leggett strode to the plate, chants of "Maroon" and "White" boomed throughout TD Ameritrade Park Omaha.

It's first time since 2008 Nebraska baseball has been ranked in a season-ending poll.

Mississippi State players celebrate with their fans in the outfield after defeating Vanderbilt 9-1 on a combined one-hitter during the College World Series championship game Wednesday at TD Ameritrade Park Omaha.

Mississippi State starting pitcher Will Bednar (24) had his moment in the sun as he pitched six no-hit innings against Vanderbilt on Wednesday at TD Ameritrade Park Omaha.