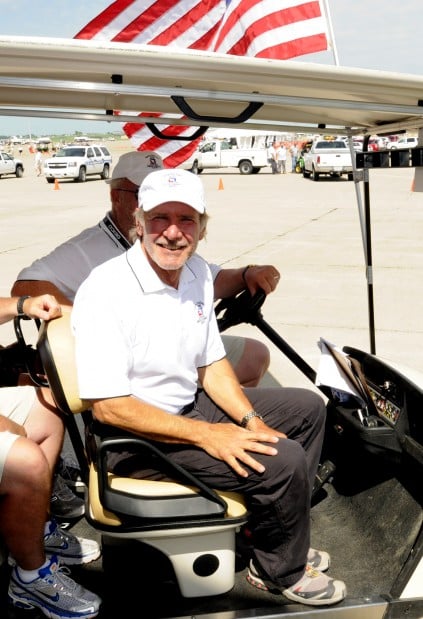 Harrison Ford, actor and honorary chairperson of the Special Olympics airlift, departs after speaking to the media at the Lincoln Airport on Saturday, July 17, 2010. (GWYNETH ROBERTS / Lincoln Journal Star) 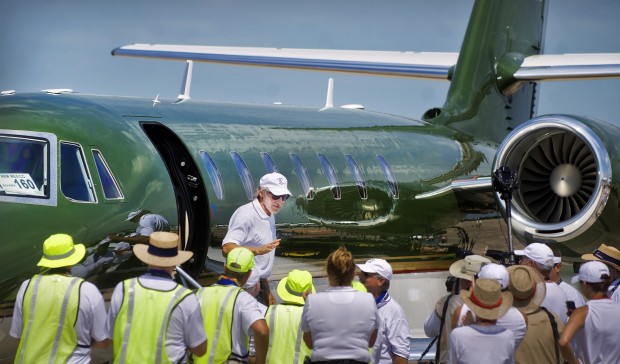 Harrison Ford is greeted as he exits his plane after shuttling a group of athletes to Lincoln for the 2010 Special Olympics on Saturday, July 17, 2010. (JACOB HANNAH / Lincoln Journal Star) 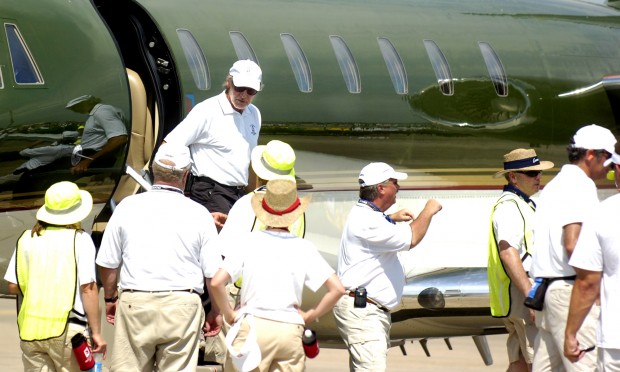 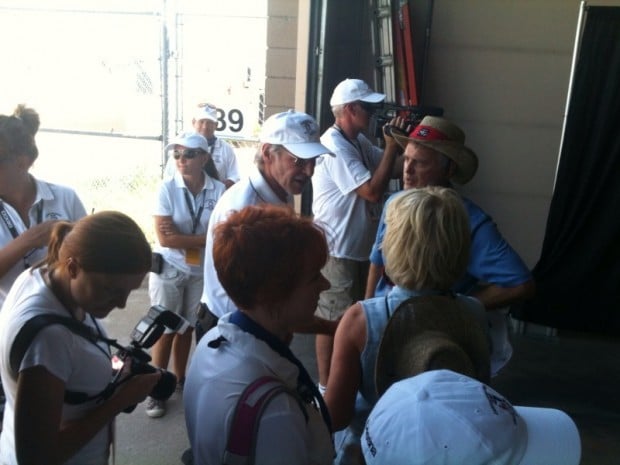 Susan Epps and Michelle Walsh were volunteering inside the Special Olympics medical tent at Duncan Aviation when Harrison Ford pulled up in his green jet.

He headed to the pilot's tent. So did they -- with the rationalization that "someone there might have a medical emergency," Epps said, smiling.

They watched as people mobbed him. They were within three feet. But they didn't follow when he rode in a golf cart to the news conference nearby in the fire station.

After the news conference, Ford returned to the pilot's tent. But few people were there at that point. So Epps, chief operating officer of Cornhusker chapter of the American Red Cross, asked the actor if she could get a photo with him.

Walsh, who works at BryanLGH, got out her Motorola phone and took it.

Epps couldn't believe it. She stood shoulder-to-shoulder with Indiana Jones.

Ford didn't say a lot at the news conference. His remarks lasted maybe a minute. He was soft-spoken. He thanked Cessna and everyone who made the airlift possible, said he was honored to be part of it.

"I had a great flight today," he said.

He said he got to to meet some "wonderful people" in the five Special Olympics athletes and two coaches he flew into Lincoln from Albuquerque, N.M.

He talked about general aviation, the important service it provides to the world -- and efforts like the Cessna airlift, in which Cessna owners from around the country donate their jets to bring in thousands of Special Olympics athletes and coaches.

General aviation, he said, is little understood by the public and by the policymakers in Washington.

He said he'll be back Saturday to pick up the athletes and coaches and return with them to New Mexico.

He said he wasn't going to hang around in Lincoln because he had to get back to Santa Fe, N.M., where he's working on a movie.

He wore a white ballcap and longish hair (maybe for the role?). He also wore a wedding ring. He got married a few weeks back to actress Calista Flockhart.

Someone congratulated him on the wedding. He said thanks.

Later in the medical tent, Walsh was sending the photo to Epps' phone.

"It's going to be my screensaver," Epps said.

What was her impression of him?

He seemed human, she said. He was a little shaggy-haired under the white ballcap. He was cute.

Harrison Ford speaks to the media

Harrison Ford spoke briefly to the media after arriving in Lincoln with five athletes and two coaches flown from Albuquerque, N.M.

Volunteers greet Special Olympics athletes as they arrived at the Lincoln Airport for the games on July 17, 2010.

Harrison Ford, actor and honorary chairperson of the Special Olympics airlift, departs after speaking to the media at the Lincoln Airport on Saturday, July 17, 2010. (GWYNETH ROBERTS / Lincoln Journal Star)

Harrison Ford is greeted as he exits his plane after shuttling a group of athletes to Lincoln for the 2010 Special Olympics on Saturday, July 17, 2010. (JACOB HANNAH / Lincoln Journal Star)

Harrison Ford arrives at the Lincoln Airport during the Special Olympics fly-in on the afternoon of Saturday, July 17, 2010. (JORDAN PASCALE / Lincoln Journal Star)
© Copyright 2021 The Lincoln Journal Star, PO Box 81869 Lincoln, NE | Terms of Use | Privacy Policy
Powered by BLOX Content Management System from TownNews.com.
You don't have any notifications.