Movin' on up: Hausmann Construction growing its business, Lincoln's skyline
View Comments
Share this
{{featured_button_text}}
1 of 5 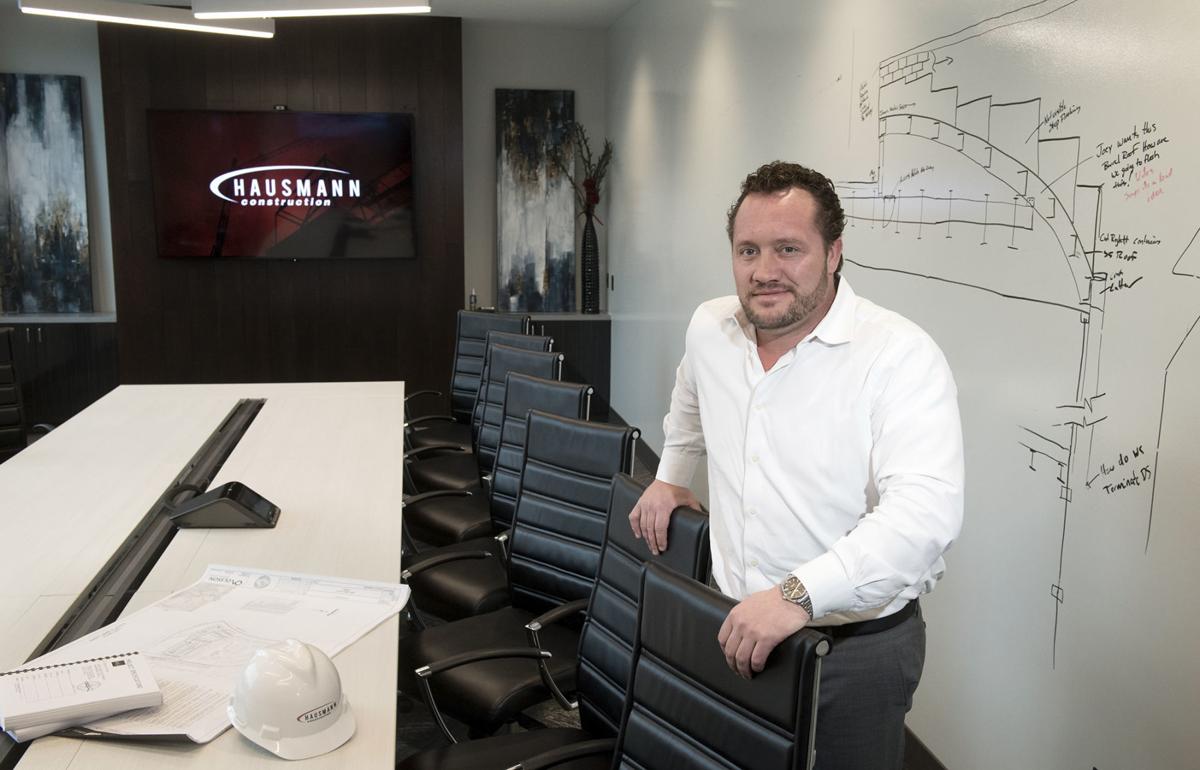 Hausmann Construction CEO Joey Hausmann has built his company from scratch to become one of the largest general contracting firms in the city. "A lot of people say, 'Man, I can't believe how fast you've grown,' but for me, it's seemed like forever." 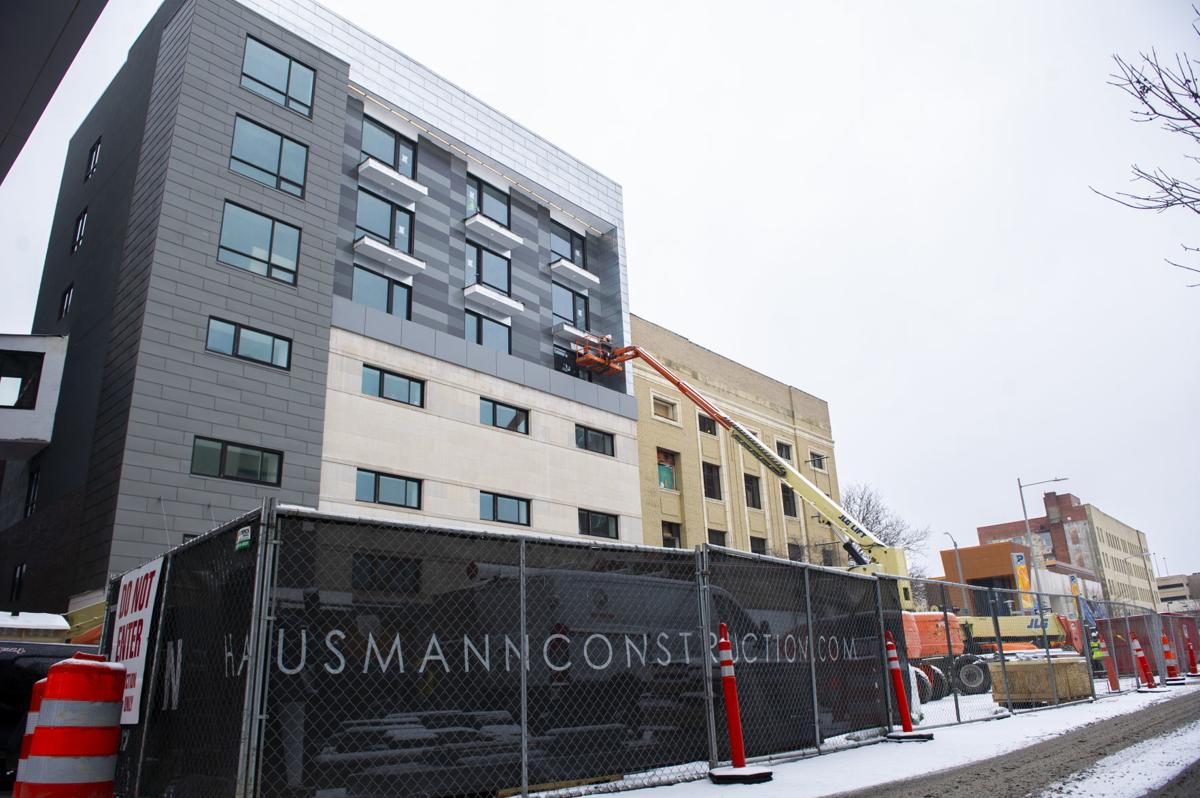 Kindler Hotel developer Nick Castaneda said Hausmann Construction shared his vision of what he wanted in the project. When Lincoln's first boutique hotel opens at 11th and P streets, Hausmann crews will move around the corner to begin work on the Lied Place high-rise. 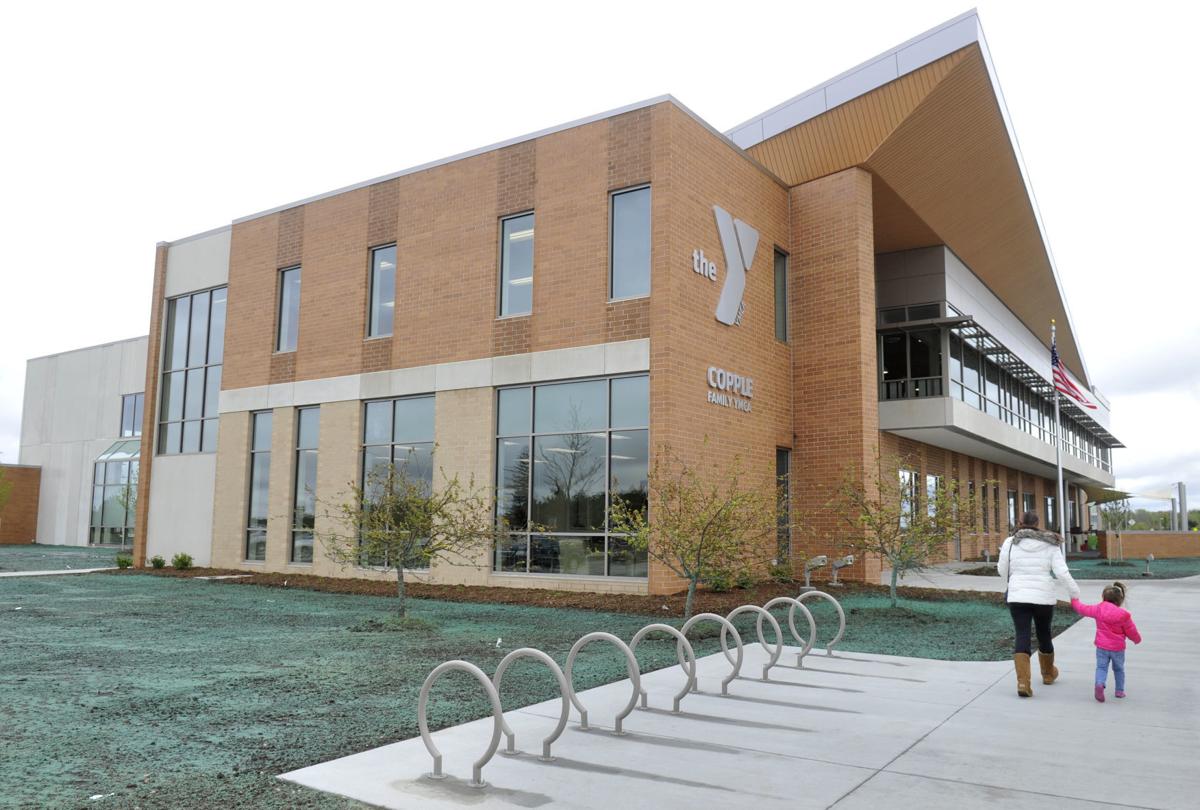 Hausmann Construction built the Copple Family YMCA, along with Moore Middle School next door. Both opened in 2017. 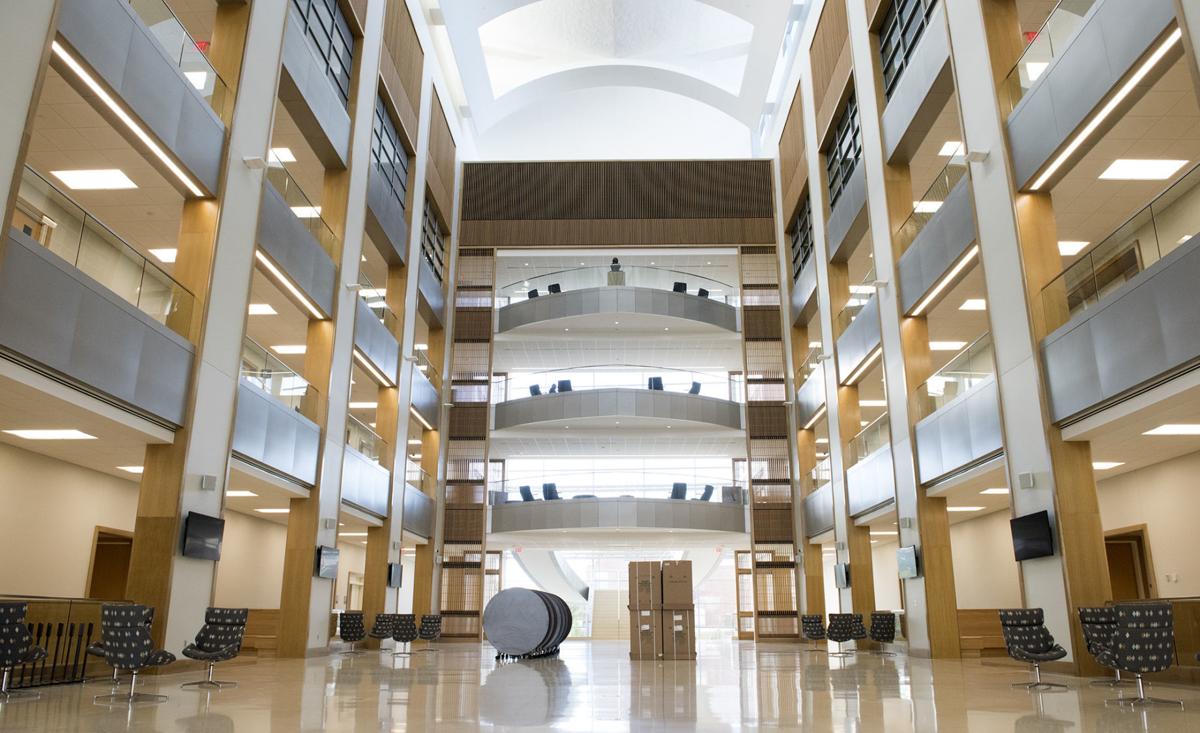 Hausmann Construction was general contractor for one of the largest campus building projects ever, the College of Business that opened in 2017. 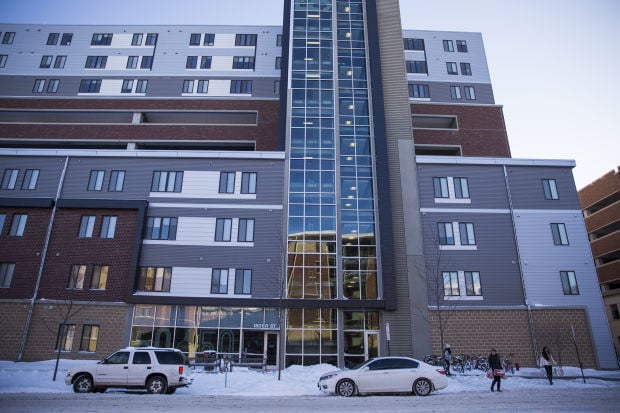 Joey Hausmann says the project to build the 50/50 student housing/parking project at 18th and R streets was a "springboard" for Hausmann Construction.

He said a lot people assume that, because many of Lincoln's major construction firms are second- or even third-generation businesses, his is, too.

But Hausmann Construction has only been around for a little more than 15 years, and in that time it has seen tremendous growth.

The Journal Star's annual look at growth and progress in Lincoln will be in the print edition Sunday.

From humble beginnings, it has grown to be one of Lincoln's largest general contractors, with nearly 300 employees and a list of current and past projects for the University of Nebraska-Lincoln, Lincoln Public Schools, Lincoln Electric System and other large organizations.

Pretty impressive for a guy who just turned 40 and didn't grow up in a construction family.

Hausmann, who was raised on a farm near Butte, a town of about 300 people in Boyd County, said he knew from a young age that he wanted to build things.

"When I was 8 or 9 years old, I knew that I wanted to be a construction person," Hausmann said.

That dream got started at the UNL, where Hausmann learned about the university's construction management program from his freshman roommate.

That started him on the road to literally building a career from the ground up.

After graduation from UNL, Hausmann spent a couple of years working for local construction firms before deciding to strike out on his own in 2003.

It was a tough go at first, and he took any job he could, which often meant roofing jobs.

"Me and my wife were on the roof tearing off shingles," Hausmann said.

Eventually, he moved into home building, with his first big project being 83 houses on 40 acres at Southwest 40th and West A streets.

When he decided to move into commercial contracting, "my resume was a blank sheet of paper," he said.

Hausmann said his first big break was when he was low bidder for a project at Elliott Elementary School that cost somewhere between $1 million and $2 million.

"At the time it was a big project for us," he said.

The company kept working its way up to bigger projects, winning a bid to do a $5 million project at Culler Middle School and then a more than $20 million project to build the Nebraska National Guard Joint Force Headquarters building at the Lincoln Airport.

Hausmann said all the projects his company has done have been important, but two particularly stand out. One was the Norris Intermediate School, which was the first time Hausmann was chosen to participate in what's known as a negotiated bid -- where instead of a low bidder being chosen from a blind bid, companies are invited to bid and are chosen based on a range of criteria.

The other project that sticks out in his mind is the 50/50 building, a student housing/parking project at 18th and R streets.

Hausmann said the building had a tight timeline and many other contractors shied away, but his company completed the project on time and within budget.

"That was really a huge springboard for us," he said.

The company has grown to around 300 employees operating out of a sleek, modern two-story headquarters building near the Wilderness Ridge Golf Course.

These days, you'll find Hausmann doing many large projects, not just in Lincoln but throughout Nebraska and in surrounding states.

Among the company's current projects are the new headquarters building for Lincoln Electric System, the Lied Place Residences and the Kindler Hotel in downtown Lincoln, the expansion of the Lincoln Children's Zoo and the new four-story parking garage and rental car facility at Eppley Airfield in Omaha.

Completed projects over the past few years have included the UNL College of Business, the joint Moore Middle School and Copple Family YMCA, and the new veterans home in Kearney.

He gives much of the credit to his employees, which include large numbers of graduates from UNL, UNO and UNK.

He said he works to put talented people into the right jobs and then, "I stay out of their way."

When Hausmann faced the biggest hurdle of his life, his wife's death in 2016 after a short battle with cancer, he said his employees not only kept the company running smoothly, but they also contributed to its growth.

"That's a testament to the people working for Hausmann Construction," he said.

Hausmann declined to say how much the company has grown in terms of revenue, but in general terms, he said it has roughly doubled in size about every three years.

In addition to its Lincoln headquarters, the company now has offices in Omaha, Norfolk, Scottsbluff and Denver.

Hausmann said that while it may seem as though the company has grown by leaps and bounds, it's actually been slow and controlled, which has been key in making sure it doesn't get overextended or take on projects it can't handle.

So how has he built such a large, successful company in such a short time?

Hausmann cites a number of factors:

* Creative and experienced estimating and project employees who can get bids right and are able to "guide owners to a workable budget."

* Treating not only clients but also subcontractors fairly.

* Making himself available personally to clients and subcontractors when they have questions or issues.

Those who have hired Hausmann for projects sing the praises of the company.

Brooke Hay, director of capital construction for UNL, called Hausmann "a strong contractor in the area."

Hay said the company has done more than a dozen projects for the university, including building its new $44 million University Health Center, a new practice facility for the Husker gymnastics teams and renovating the East Campus Union.

The College of Business, at $84 million, was one of the largest campus building projects ever, and having Hausmann as general contractor on the project "worked out very well," Hay said.

"They did a good job on that."

Nick Castaneda, who along with his wife, Brooke, is developing the Kindler Hotel at 11th and P streets, is effusive in his praise.

Castaneda said he interviewed several local and national construction firms, many with more experience than Hausmann. But of all the companies, it shared his vision of what he wanted in the project.

"They did a lot more listening to what we wanted as opposed to telling us what we should have," said Castaneda, who hopes to have Lincoln's first boutique hotel open by summer.

He sees big things on the horizon for Hausmann.

Ultimately, the pride in their work is what’s going to make the Kindler Hotel a success and make Hausmann "the premier construction company in the Midwest -- which is where they are headed," Castaneda said.

Where the company is headed next, after finishing work on the Kindler, is right around the corner, where work will soon start on Lied Place, a 20-story mixed-use building that will be the second-tallest building in the city.

"That's going to change the skyline of Lincoln," Hausmann said.

It seems fitting that the building changing the skyline of Lincoln will be built by the company changing the construction landscape in the city.

People picking up passengers flying into Lincoln have a new parking option.

Huge development proposed north of I-80 at 27th Street

A large project would put commercial development, including retail stores, on the north side of Interstate 80 at the 27th Street exit.

Movers assembling desks and hauling chairs into the third floor of the Terminal Building on Thursday marked the return of Legal Aid, the last …

Take a look at the city's progress

Lincoln has improved its ranking as a top metro area for economic development.

Twice in the past few years, Sampson Construction has started work on a building with the purpose of making it a new headquarters location, on…

Kindler rooms will be open to public this Husker football season

This year, I had the chance to find out more about what's rapidly becoming Lincoln’s largest and busiest construction firm.

Hausmann Construction CEO Joey Hausmann has built his company from scratch to become one of the largest general contracting firms in the city. "A lot of people say, 'Man, I can't believe how fast you've grown,' but for me, it's seemed like forever."

Kindler Hotel developer Nick Castaneda said Hausmann Construction shared his vision of what he wanted in the project. When Lincoln's first boutique hotel opens at 11th and P streets, Hausmann crews will move around the corner to begin work on the Lied Place high-rise.

Hausmann Construction built the Copple Family YMCA, along with Moore Middle School next door. Both opened in 2017.

Hausmann Construction was general contractor for one of the largest campus building projects ever, the College of Business that opened in 2017.

Joey Hausmann says the project to build the 50/50 student housing/parking project at 18th and R streets was a "springboard" for Hausmann Construction.