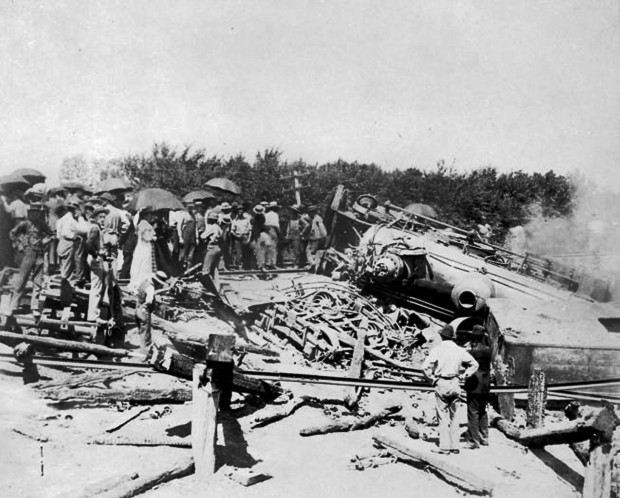 Onlookers gather at the Aug. 9, 1894, crash of a Rock Island passenger train at what is now Wilderness Park. Police detectives determined the track was sabotaged, which led to the deaths of 11 train passengers and crew. (LJS file photo) 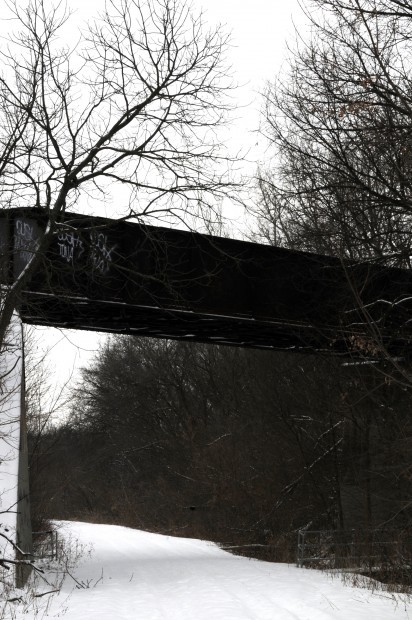 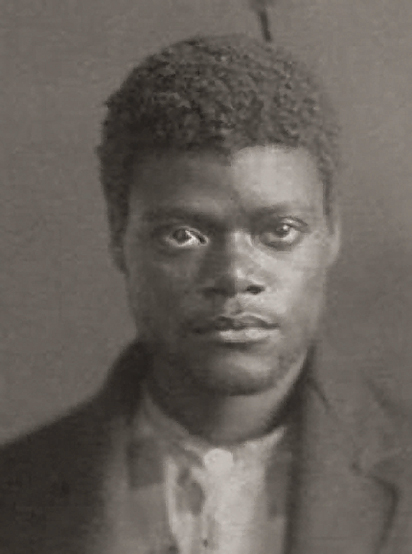 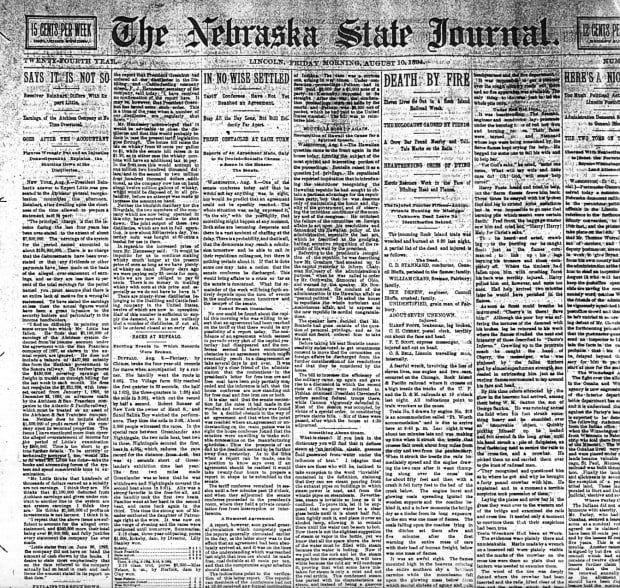 The headline from the Aug. 10, 1894, Nebraska State Journal caught the eye of a researcher perusing records at the Library of Congress.

"Eleven Lives Go Out in a Rock Island Railroad Wreck."

The subheadlines hooked Joel Williamsen into the story for the next several years.

"The Holocaust Caused by Fiends."

"A Crow Bar Found Nearby and Tell-Tale Marks on the Rails."

Railroads were to the 19th century what airliners are to the 21st.

Locomotives gorged on coal and retched steam and smoke into the Plains sky, criss-crossing Nebraska with freight and passengers. No fewer than five railroads served Lincoln in the 1890s.

But this was more than a derailment. It was sabotage.

And that made it mass murder.

Williamsen strained to read the newspaper's grainy type and found himself riveted by the century-old narrative.

"It was an awful sight. The flames mounted high in the heavens coloring the entire southern sky a brilliant carmine while the moonbeams fell upon the glowing mass below from which mortal shrieks of agony and pain were heard to issue."

The train departed from Fairbury at 7:30 p.m. and was due to reach Lincoln about two hours later. It carried 33 passengers and crew.

At about 9:20 p.m., it reached a 400-foot-long, 40-foot-high trestle that carried the Rock Island over Salt Creek and an intersecting Union Pacific line. The trestle was about four miles south of the middle of Lincoln, the growing capital of a state not yet 30 years old.

"When it struck the trestle the rails immediately spread and the engine drawing the two cars after it went thumping along over the cross ties and then with a crash it fell forty feet to the bed of the creek below."

The engine burst, spilling glowing coals onto the wooden trestle and train cars.

Soon, both were aflame.

Three men -- C.J. Bills, Jay McDowell and brakeman Harry Foote -- were the first to escape. Bills was an Army colonel traveling from Fairbury to Lincoln to lead the Nebraska militia in a week of drills. He directed the rescue effort.

They discovered the wreckage had trapped passengers and crew in the engine and forward car. Fire prevented any hope of escape. So the trio of rescuers concentrated on the rear car and were able to free 15 passengers. Foote, who had suffered a broken leg, climbed onto the burning pile twice to pull out two of his fellow crewmen.

Bills and McDowell started in search of a phone or telegraph. They ran two miles through a corn field to the north, where the first building they reached was the state penitentiary. They called the railroad, police and the fire department.

"It was impossible to get a steamer over the rough country roads out there and no fire apparatus was available. The only thing to do was just let the whole pile burn."

About 40 minutes after the wreck, a train arrived to carry the survivors, many of whom were injured, to Lincoln.

Later, some would tell police they saw an unknown man holding a lantern as they escaped death.

A detective found clear evidence of criminal wrongdoing: pulled spikes, marks on the rail made by a wrench and gouges in the ties left by a crowbar.

An onlooker found a 40-pound crowbar nearby in the grass.

Police shared no information about possible leads, but that didn't stop the State Journal from indignant speculation.

"Without a doubt this was one of the most dastardly pieces of work ever accomplished by western desperadoes. The motive was no doubt robbery, but in some manner the villains were frightened away before they could accomplish their end."

Within two days, police made an arrest. His name was George Washington Davis. Survivors identified him as the man they saw with the lantern.

He showed up in Nebraska in the 1880s and spent time in prison for theft.

Later, at trial, police testified Davis first told them he ran four miles from the "colored club" in Lincoln to the crash site after hearing about it.

But then a detective asked Davis what it sounded like.

"Not too bad until the engine blew up," was his reply.

The engine blew up moments after the derailment.

Still, prosecutors had little evidence and could offer no motive. Davis never made an admission of guilt, nor did he provide investigators with other names. And he had his supporters within Lincoln's African-American community who felt he was wrongly accused.

The first jury could not reach a verdict.

In the second trial in 1895, the judge instructed the jury it could find Davis guilty of second-degree murder if it believed first-degree murder had not been proven. That's what the jury did.

Davis' prominent supporters kept working to undo what they considered an injustice.

They succeeded in 1905, when Gov. John Mickey paroled Davis, saying "diligent and close consideration has led to the conviction that all ends of justice have been fully served and to grave doubts as to the guilt of said convict."

Davis was released to a farmer in Beemer, and his name disappeared from the historical record.

He attended a one-room elementary school and the University of Nebraska-Lincoln as a Regents scholar. The 48-year-old systems engineer now works for the Pentagon.

He was doing research on Lincoln's early history when he happened upon the train wreck story. He had never heard of it and found few others who had.

For three years, he worked with the Nebraska State Historical Society to search for court records but was unable to find them. So almost all of the information about the wreck and trial came from newspaper accounts.

Williamsen used that research to write a novel about the wreck and other historical events in 1890s Nebraska. Called "Barrelhouse Boys," the self-published novel was released late last year.

Mystery still surrounds the train wreck. While Williamsen believes Davis had something to do with the sabotage, he doesn't think he acted alone. He speculated that one of Rock Island's competitors likely damaged the track in an effort to cause the railroad's financial ruin.

The crash site is in what is now Wilderness Park, along the Jamaica North Trail where it crosses under what's left of the railroad trestle. Williamsen is working with the Lincoln Parks and Recreation Department and the state Historical Society to place a marker at the site. The marker would include a brief description of the event.

Representatives from both agencies said they are open to the marker project. They are planning a meeting with Williamsen in March to discuss it further.

Williamsen believes the story should never be lost to history again.

"The magnitude of the murder, the heroics of the crews, the ongoing mystery of who was really behind the wreck all converge to make this an interesting piece of Nebraska history."

A historical marker commemorating a tragic 1894 train wreck will be unveiled Monday southwest of Lincoln.

The new historical marker along a recreational trail in southwest Lincoln marks where 11 people died in an 1894 train wreck. But Joel Williamsen, the writer who dedicated the marker Monday, said he hopes it will honor one crash survivor as much as it recalls the lives lost.

Every Monday, the Epilogue series will follow up on stories published earlier in the Journal Star.

See more from the Epilogue series

Original story from 1894: Death by fire

Originally published on August 10, 1894 in the Nebraska State Journal

Joel Williamsen will sign copies of "Barrelhouse Boys" on March 13 at four Lincoln book retailers. To learn more about his schedule, which inc…

Onlookers gather at the Aug. 9, 1894, crash of a Rock Island passenger train at what is now Wilderness Park. Police detectives determined the track was sabotaged, which led to the deaths of 11 train passengers and crew. (LJS file photo)