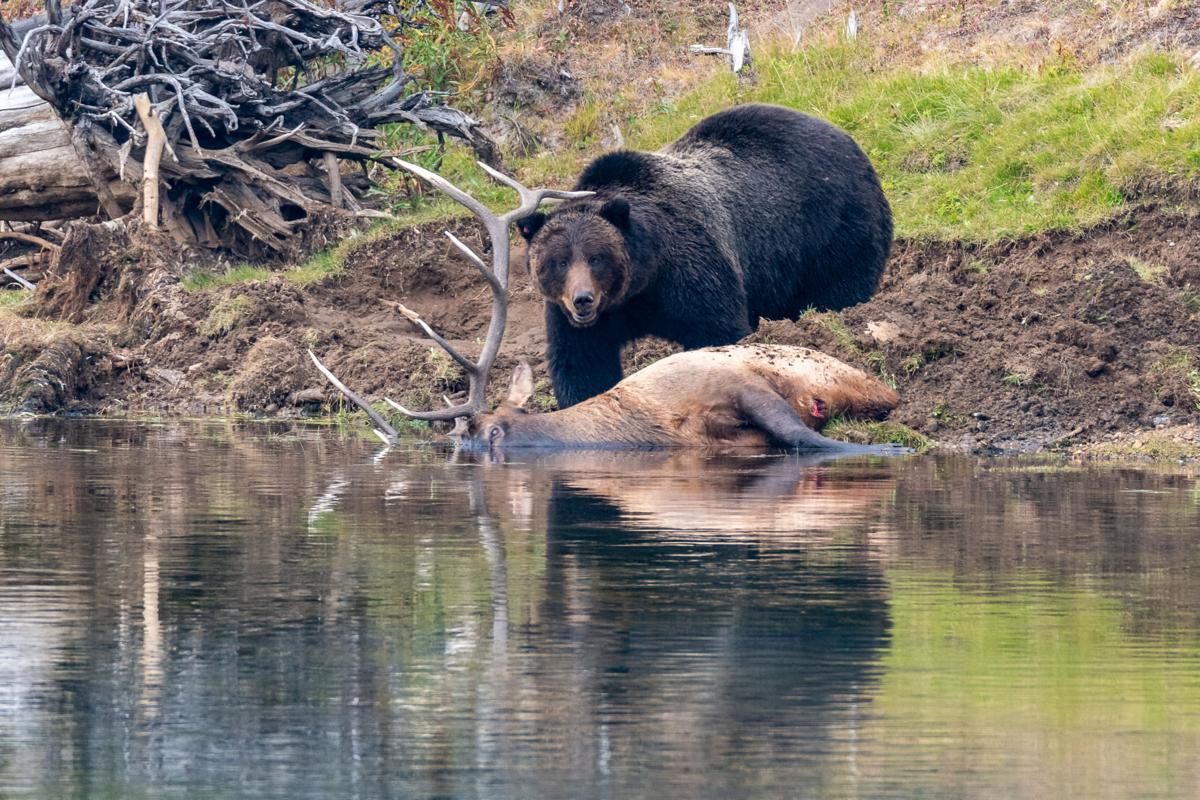 A grizzly bear in Yellowstone Park guards the elk it killed recently. The bear has spent several days with the dead elk, which has drawn a crowd to the spot and caused traffic jams. 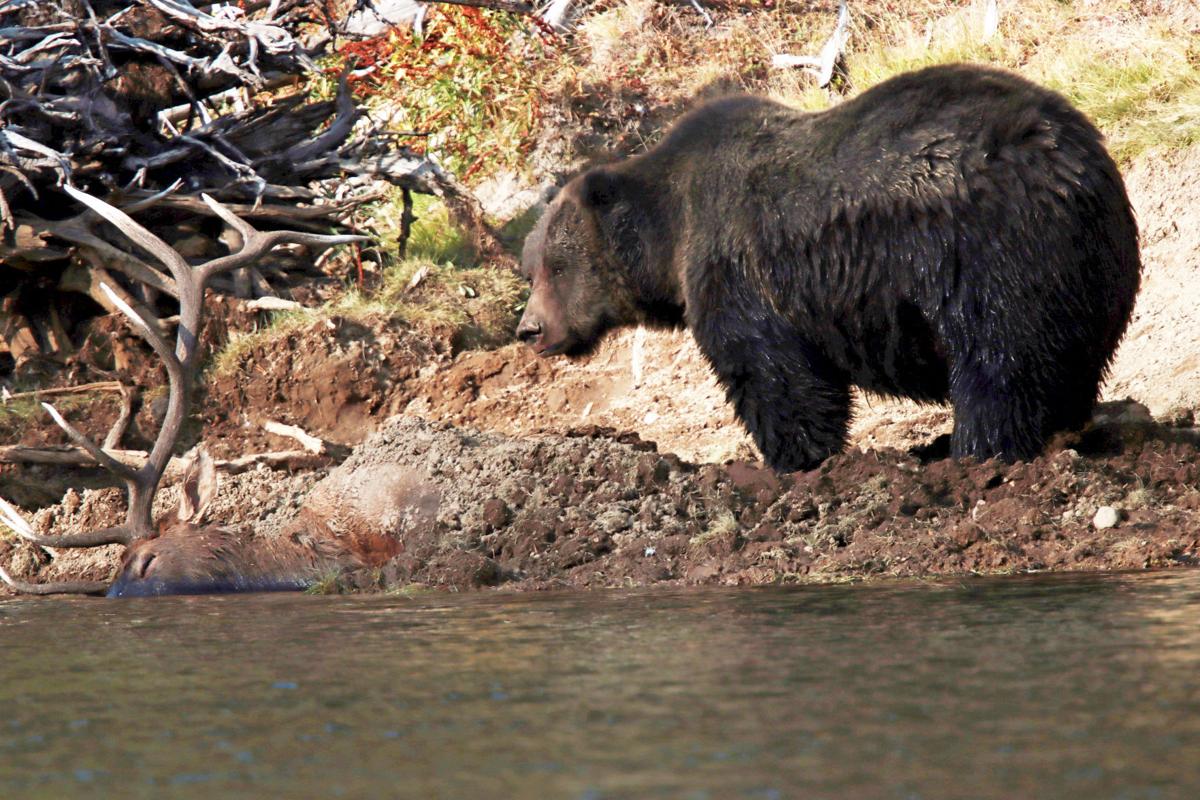 The bear has drawn a steady stream of tourists and photographers to the roadway between Canyon and Lake in Yellowstone National Park.

For the second time this year, a visitor to Yellowstone National Park has captured astonishing video of a grizzly bear bringing down large prey.

Early on the morning of Sept. 18, part-time Cody, Wyoming, resident BE Judson shot footage of a large male grizzly pursuing a full-grown, six-point bull elk into the Yellowstone River. As the bear neared the bull, the elk turned and tried to fend off the bear by lowering its head and raking the bruin with its antlers.

The grizzly fended off the counterattack by maneuvering behind the elk’s head. It then stood upright on its hind legs and bit down on the elk’s spine. The life-and-death struggle became a battle of attrition after that, with the bear finally wearing the elk out. Both animals can tip the scales at around 600 pounds.

In the end, the bull collapsed into the water, and the grizzly methodically guided the floating carcass to the opposite side of the river, away from a gathering crowd of tourists and park officials trying to ensure everyone’s safety.

“It’s astonishing,” Judson said of the video, adding that it was such an “oh my” moment.

Online posts have identified the bear as a known male, but Yellowstone bear biologist Kerry Gunther said the bear's ear tag couldn't be read to confirm which bear it is.

Bear #791 was seen scavenging on a 2- to 3-year-old male grizzly near the East Entrance last October, according to the park’s 2019 bear report.

In May, Jackson, Wyoming, resident Michael Daus captured video on his cellphone of a grizzly bear using the same tactics to bring down a young bison in the Firehole River near Grand Prismatic Spring. The dead bison was removed by park staff to ensure visitor safety in the busy area, but the elk remains on the banks of the Yellowstone River in Hayden Valley where crowds of tourists have jammed the road for days to watch, shoot photos and video.

Fall is when elk mate. Dominant bulls round up cows for breeding. Male challengers will sometimes clash for breeding rights to the harem, which can be exhausting and sometimes deadly for the bulls if they are gored.

Gunther said grizzly bears mostly prey on elk calves in late spring and early summer. They also will bring down adult elk in early spring when bears can run them into deep snow — "bears have large feet and can sometimes run on top of the snow while elk break through the crust and sink deep allowing the bears to catch them. In addition, we see some predation on bull elk in the fall. The bulls are preoccupied with gathering and herding harems of cows which makes them more vulnerable to bear predation. Biting and separating the spinal column is a common technique we see when bears kill adult elk and bison."

Judson pulled over to take a photo but soon realized it was still too dark. Flipping her camera to video mode, she saw the bull run into the water with the big bear hot on its heels. She estimated she was only 150 to 200 yards away when the watery brawl began.

Later, when she looked at the time stamp on her footage, she found out the fight, and then the bear’s struggle to beach the bull, took almost half an hour.

“It was a long struggle,” she said.

After the elk died, the carcass began floating toward the side of the river where the highway runs, Judson said. Possibly realizing that could jeopardize his ability to dine on the kill, the bear began guiding the floating elk to the opposite side of the river. About 200 yards downstream from where they’d both entered the water, the bear pulled most of the elk ashore, she said.

Since then, photos on social media of the bear show it burying the elk carcass, sleeping atop the pile and confronting a wolf that came to investigate.

Wildlife photographer Deby Dixon posted a photo online of the bear appearing to snarl at the gaggle of tourists across the river. She wrote that the bear is “very methodical about eating his meals,” delicately clearing dirt off the carcass before mealtime “almost like he is taking a brush and sweeping the elk clean.” After a snack, the grizzly re-buries its kill in a “thoughtful and deliberate” manner.

“YNP has become the primary grizzly bear viewing destination in the lower 48 states,” the park said in its 2019 bear report. “The most formidable challenge for managing roadside bear viewing in YNP is not managing the bears, but sustaining and expanding as necessary the people management programs that have made bear management successful to date.”

Thanks to the park officials’ efforts to keep bears from associating humans with food, most of Yellowstone’s more than 700 grizzly bears die of old age or other natural causes rather than by human actions, the report noted.

Part of keeping humans and bears apart includes removing carcasses near occupied areas. In 2019 the park reported the removal of “101 large mammal carcasses from visitor use areas so they would not attract grizzly bears.” Another 33 times, grizzlies were hazed from high-use areas. Emphasizing how common it is to see bears in the park, officials recorded 226 grizzly bear jams in 2019 and 738 for black bears.

In May of this year, Yellowstone photographer Jim Peaco captured images of a large grizzly feeding on a bison submerged in water in the Lamar Valley.

Judson is a bit embarrassed and overwhelmed by all of the attention her video has attracted since it was posted. A week after the incident her YouTube video had garnered more than 800,000 views.

“I’ve already had requests from overseas,” she said.

The night before seeing the grizzly bring down the elk, she captured footage of wolves feeding on a carcass. So her summer in the park ended with some unusual experiences.

Judson created the YouTube channel so her grandchildren could see the wildlife and landscapes she experiences during her summer forays into Yellowstone.

“It’s their way to see what grandma is up to,” she said.

From the archives: Front-page coverage of the Yellowstone fires in 1988

Sometimes the most amazing places on earth don't impress everyone. Here are negative online reviews for Yellowstone National Park posted on Yelp, Google and Travelocity.

Montana game wardens tranquilized a black bear in a neighborhood near the Capitol building in Helena Tuesday morning.

A grizzly bear in Yellowstone Park guards the elk it killed recently. The bear has spent several days with the dead elk, which has drawn a crowd to the spot and caused traffic jams.

The bear has drawn a steady stream of tourists and photographers to the roadway between Canyon and Lake in Yellowstone National Park.