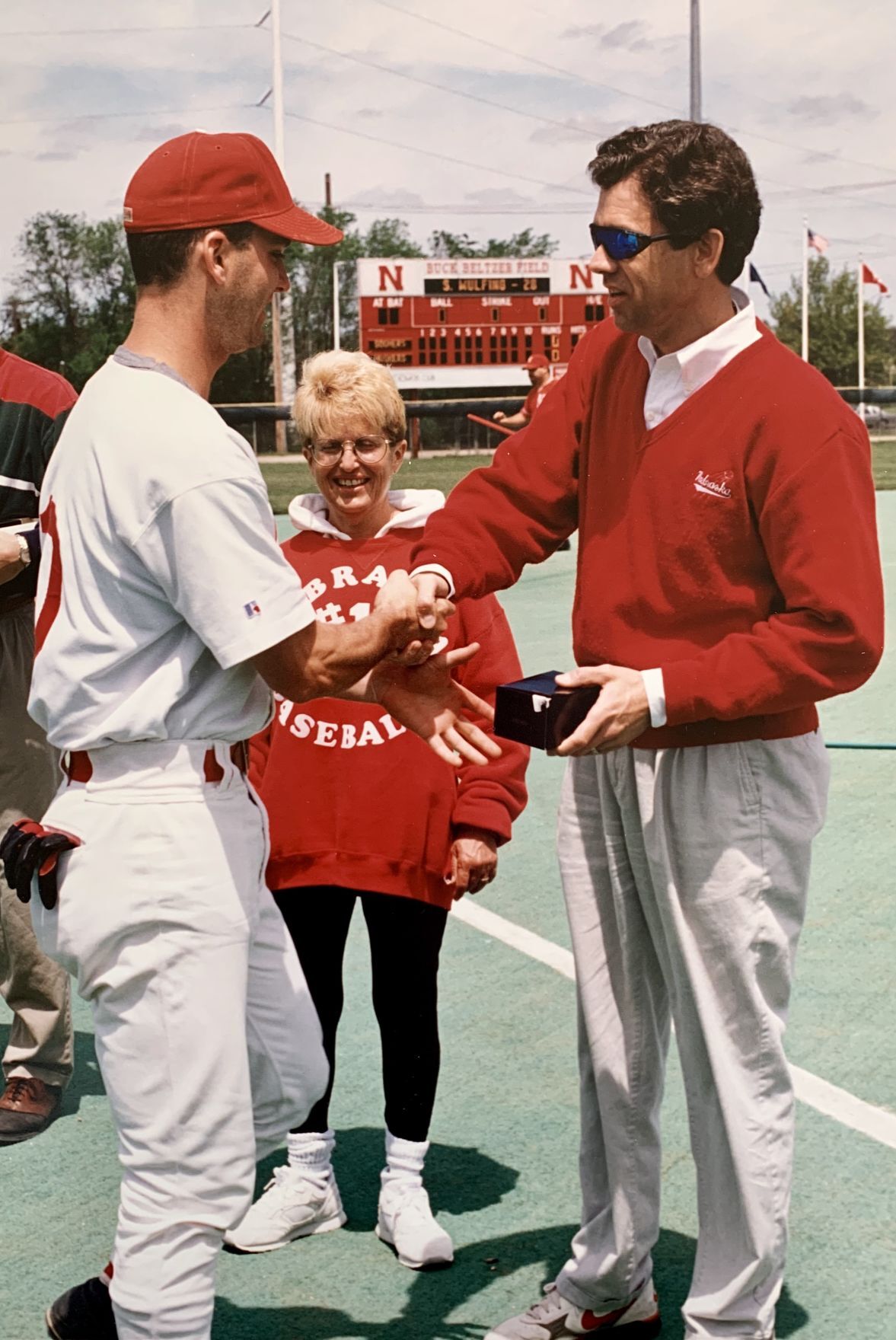 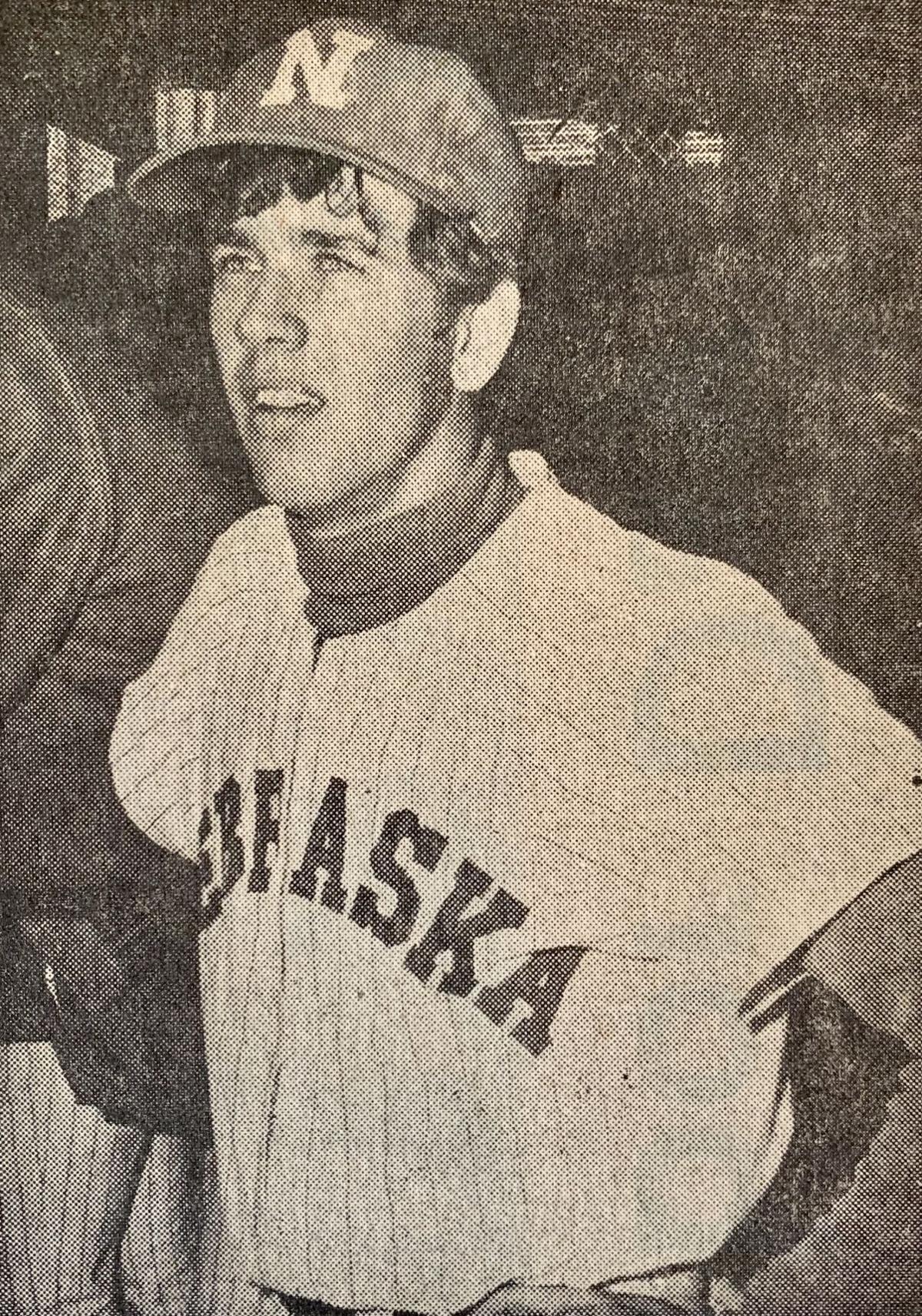 Gene Stohs was a starting pitcher and outfielder for the Huskers from 1969 to 1972. He was named a first team All-American outfielder by Sporting News in 1972. The publication’s selections that year also included outfielder Fred Lynn, a 17-year MLB veteran whose honors included an American League Most Valuable Player award. 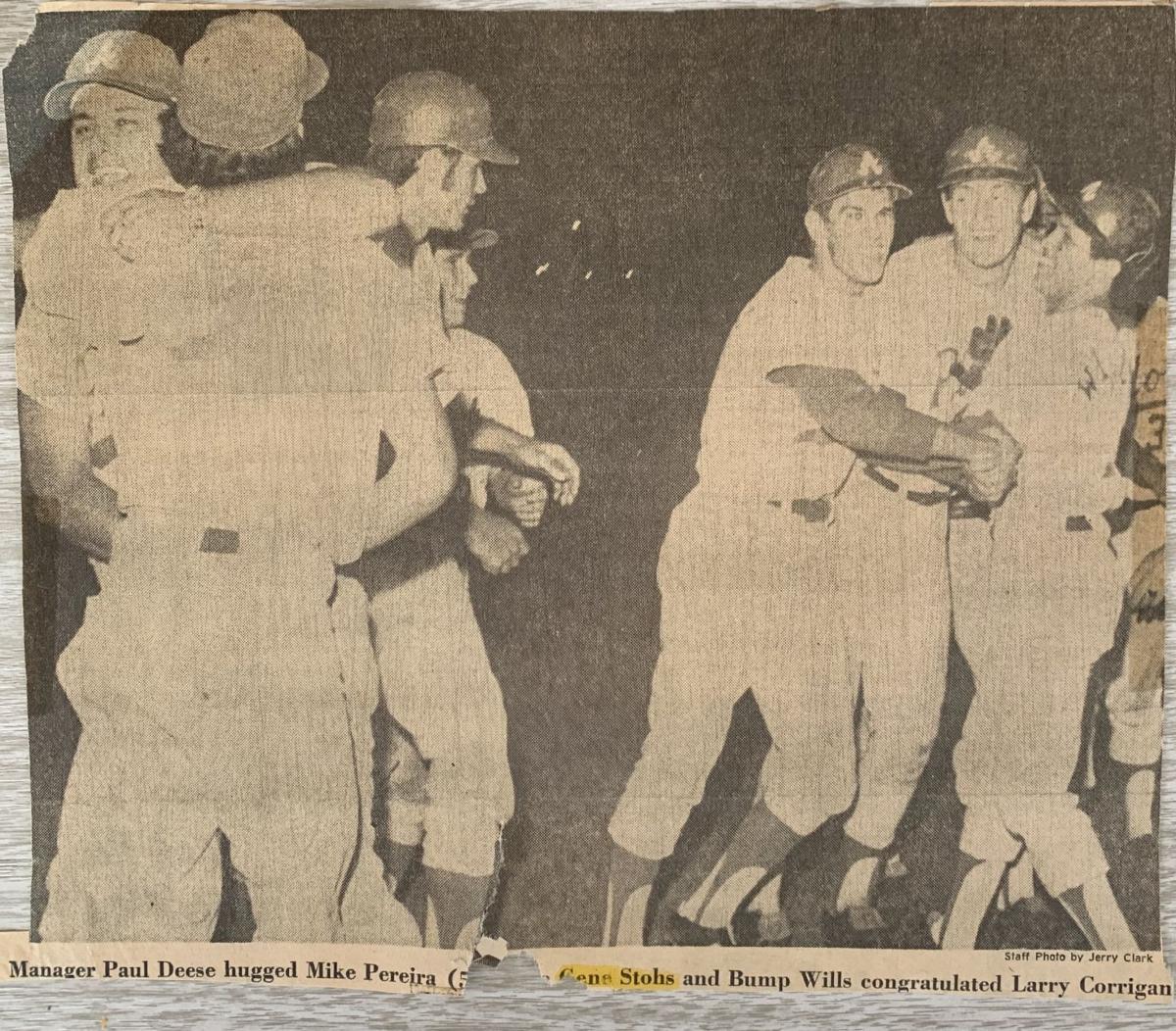 Gene Stohs and teammates celebrate winning the National Baseball Congress tournament championship in 1971. Among those pictured is Mike Pereira, an outfielder from Santa Clara, Calif., who went on to become head of the NFL officials and is now a frequent rules analyst for Fox Sports TV, reviewing referees’ calls in college and pro football games.

One of the upsides of this prolonged period of self-isolation has been the opportunity to pause and reflect.

If you’re a baseball fan – and you likely are, since you’re reading this article – you’ve had more than ample time to relive baseball memories of your childhood and to catch up on those classic baseball movies on MLB Network.

But after watching Shoeless Joe Jackson emerge from the Iowa cornfields for the 17th time in two months of TV viewing during the lockdown, even “Field of Dreams” loses some of its luster.

Gene Stohs, on the other hand, has turned to his old scrapbooks to pass the time during these months of social distancing. The 69-year-old retired Lincoln physician has plenty of yarns to spin, and memories to relive, through his four seasons as a Husker pitcher and outfielder (1969-1972) and two summers of semi-pro ball (1970-1971).

Sifting through his scrapbooks on a recent spring day, Stohs ran across an offer sheet the Oakland A’s had issued in 1968 after they selected the Grand Island pitcher-outfielder in the 12th round of that year’s draft.

“By that time, I already knew I was going to UNL,” said Stohs, “so I didn’t pay much attention to the letter.” The cash offer was far from lucrative – $4,000, which translates to $28,000 in terms of today’s purchasing power – but the company letterhead was certainly packed with star power.

Among the names at the top of the offer sheet: colorful team owner Charlie Finley, who had moved the A’s from Kansas City to Oakland that year; and former Yankee great (“Joltin’”) Joe DiMaggio, who served as the A’s hitting instructor from 1968-1970.

Hard to believe, but a half-century ago, a professional baseball player’s compensation rivaled the salary of the average wage-earner on the street.

Ralph Terry, the No. 2 man in the New York Yankees’ starting rotation in the early 1960s, once said during a speaking appearance in Lincoln that he made more money selling cars in Kansas City one summer than he did playing for the Yankees.

Stohs would go on to receive two more offers to play pro ball.

The Chicago White Sox selected the speedy center fielder in the third round of the 1972 draft, envisioning Stohs’ ability to cover a lot of ground in cavernous Comiskey Park. That offer was accompanied by a $5,000 signing bonus.

“I had applied to medical school in the spring of 1972 to get some leverage, as there was no free agency,” Stohs reflected.

In January 1973, temptation resurfaced. He was drafted again, this time in the second round by the Cleveland Indians, but the Tribe issued the same monetary offer: $5,000.

Stohs had some medical school behind him by then. He graduated from the University of Nebraska College of Medicine in 1975. He went on to practice medicine for 40 years, specializing in obstetrics and gynecology, before retiring last year.

Asked to pinpoint the one moment of his playing career that he’ll remember forever, Stohs’ response was spontaneous: a clutch hit off a future MLB Hall of Famer that eventually paved the way to his team’s NBC (National Baseball Congress) championship in 1971.

Stohs remembers the moment like it was yesterday: Tied ballgame, bottom of the ninth, national title on the line, with an imposing 6-foot-6 figure by the name of Dave Winfield – yes, that Dave Winfield – on the mound.

“I was the lead-off hitter, worked the count to 3-2, and managed to hit a single up the middle,” Stohs said. He later advanced to second and scored the winning run on a double by Larry Corrigan, who would later become head coach of the baseball program at Iowa State University.

Batting lead-off and playing center field for the Glacier Pilots semi-pro team in Anchorage, Alaska that summer, the speed merchant was the lineup’s table-setter for a team that would eventually produce nine Major Leaguers. The cavalcade of stars included southpaw hurler Randy Jones (National League Cy Young Award winner with the San Diego Padres in 1976); Bump Wills, son of legendary base stealer Maury Wills; and Bruce Bochte, a 12-year utility player in the big leagues.

Stohs has a couple of keepsakes to go with his memories from the summer of ’72 – his national championship ring and an inscribed black Louisville Slugger bat.

Stohs’ two summers of semi-pro ball also included a chance to play with Ron Guidry, who went on to a stellar career as a Yankees starting pitcher, and to learn under team manager Bob Cerv, a former Yankees outfielder and Nebraska native.

With no high school baseball team in Grand Island back then, Stohs relied on his Legion baseball performances to get noticed by college recruiters.

“Legion baseball was a BIG deal,” said the lanky lefty, who racked up a 34-5 win-loss record from 1967-1969. Crowds exceeding 1,000 spectators were commonplace, he said, with a standing-room-only crowd of 2,000-plus once recorded for a game in North Platte.

His statistics in Legion ball jumped off the page: 546 strikeouts in 327 2/3 innings over three summers, with a 34-5 win-loss record and a microscopic 0.63 ERA.

At UNL, the Grand Island native quickly made an impression in 1969. Then-head coach Tony Sharpe tabbed the heralded freshman as his opening-day starting pitcher. Over a half-century later, only one other pitcher (Shane Komine) has drawn NU’s opening-day assignment as a freshman. (Stohs remains the only Husker freshman pitcher to have won his opening-day start.)

His batterymate in those days was a pretty good player in his own right: Adrian Fiala, a two-sport athlete at UNL, and in later years a beloved broadcaster of Nebraska athletics.

Brett Stohs played on the 1997 JC Brager team that became the first Lincoln team in 40-plus years to win a Legion state baseball tournament title.

Gene Stohs was a starting pitcher and outfielder for the Huskers from 1969 to 1972. He was named a first team All-American outfielder by Sporting News in 1972. The publication’s selections that year also included outfielder Fred Lynn, a 17-year MLB veteran whose honors included an American League Most Valuable Player award.

Gene Stohs and teammates celebrate winning the National Baseball Congress tournament championship in 1971. Among those pictured is Mike Pereira, an outfielder from Santa Clara, Calif., who went on to become head of the NFL officials and is now a frequent rules analyst for Fox Sports TV, reviewing referees’ calls in college and pro football games.