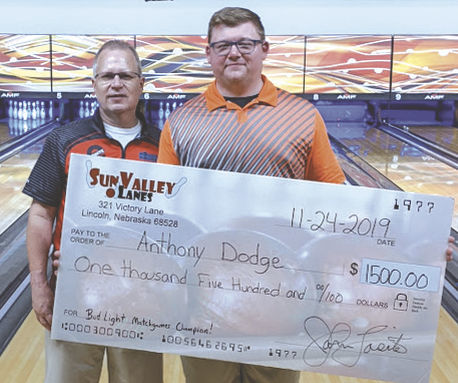 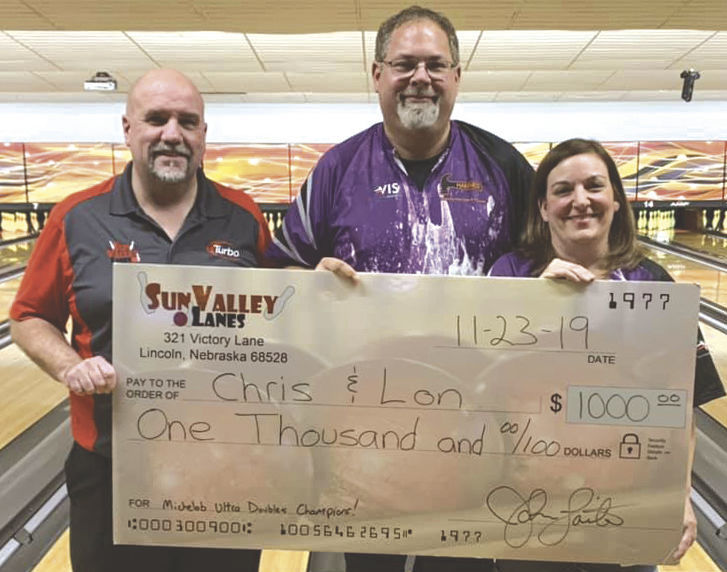 The 34th annual Bud Light championship field was dominated by bowlers age 30 and under on Nov. 24 at Sun Valley Lanes.

Of the 10 finalists, only two were over 50: Mark Porter, 57, and Tom Kelley Jr., 53. The average age of the finals field was 31, and 22-year-old Anthony Dodge led the field with a 238 average in the finals to win his first championship. The win was worth $1,500 and was the largest individual prize he has won in his short career.

The youngest bowler in the championship was 20-year-old Trenton Johnson, who finished third. But experience also plays a part in bowling, and Porter averaged 225 to finished second in winning $850.

The weekend began on Saturday, Nov. 23, with the first Ultra Doubles championship, which consisted of 63 teams bowling for a first-place prize of $1,000. This event was handicapped, with handicap being 80% of the difference between your average and 220. This gave the bowlers that would be competing on Sunday a chance to see what the WBT Taj Mahal lane pattern would be like.

The tournament consisted of three traditional games and six baker games. Baker games consist of each member of the team bowling every other frame. After the qualifying, the top 16 teams qualified for the match game finals. The leading qualifiers were Mark Porter and Rick Miller. The top four teams received two byes, and the next four teams got one bye.

The tournament's first champions were Lon Hollibaugh and Chris Johnson, who qualified in 15th place. They had to win five two-game matches to claim the championship. In the championship match, they defeated Zach Karr and Kolby Crowell, 430 to 330.

The Bud Light finals consisted of nine games of head-to-head competition, with a 10th game by position after the initial nine games. The only 300 rolled in the tournament was by Ryan Powers in the fifth game of the finals. Only half of the finalists averaged over 200 in the finals.

Anthony Dodge won the championship by 158 pins after finishing 8-2 in the finals. His only two losses were to second-place Mark Porter, 228-223 and 247-226. Dodge said he didn’t feel he had confidence about winning until the fourth or fifth game of the finals. That is when he realized that his shot was staying consistent, and he didn’t have to make major moves on the lanes to maintain his line to the pocket. He really didn’t think that he could dominate the way he did, because he was only in front by 37 pins after game five. His scoring stayed consistent while the others ran into tougher conditions and fell back, which led to his 158-pin final margin.

The leading qualifier was Trenton Johnston, who averaged 248 for the qualifying and led the field by 76 pins. Johnston also won $100 as the leading qualifier to go with his $650 for third place. Dodge explained that Johnston and he have been friends for a long time and were helping each other make changes during qualifying, which helped them stay consistent.

Asked how it felt to see eight of the finalists age 30 and under, Dodge said that the younger bowlers are getting better, and "it was good to see the young guys get the majority of the tournament prize fund." Dodge also didn’t think that Porter would be his nearest competition, because he thought that he wouldn’t be able to last through 16 games after bowling six games on Saturday. But as they say, experience goes a long way.

In the second-chance tournament for bowlers not reaching the finals, the champion was Ryan Schlotfeld-$200 with Lincolnites Jeff White third for $75 and Rick Miller fourth for $25.

When Abbie Squier started her high school softball career, she was considered a very good player on her junior varsity team. When she ended it…

Gymnastics wasn’t a good fit for Hannah Ray, and her 5-foot, 2-inch frame didn’t lend itself to basketball.

Julie Obear’s competitive spirit is a force to contend with, not only on the tennis court but in life.

Christy: Bolt’s coaching approach will be similar to Erstad’s

Moving forward with Nebraska baseball in 2020, as things change they will stay the same …

Lincoln Repair Cafe fixes things for free, keeping them out of the landfill and making them last longer.

Can you imagine your college baseball season getting underway in less than a month, and your players are not to be found on campus? With sub-f…